Race Report: Before today we didn’t know what the Sky plan would be for the sprints, the team need to have riders for the aspirations of Wiggins, but Cav proved today that he can do it for himself with a startling show of speed at the end of a rip roaring sprint. Looks like Cav can win a sprint under any conditions!

The Tour is still in Belgium with today’s 207.5 kilometre stage from Visй to Tournai; a sprinters stage suited to the talents of riders like; Cavendish, Kittel, Greipel, Goss, Farrar and Renshaw and not to forget Mr. Sagan who could cause an upset. The course has one little 4rd Cat climb, the Cфte de la Citadelle de Namur after 82.5 kilometres, which will be of interest to mountains leader Michael Morkov (Saxo Bank-Tinkov Bank), but as he has 3 points to Peter Sagan (Liquigas-Cannondale) and Pablo Urtasun Perez (Euskaltel-Euskadi) on 1 point, with only 1 point on offer he will keep the jersey tonight whatever.

Sunday’s injury call was quite high with Tony Martin and Jerome Pineau (Omega Pharma – Quick-Step) both crashing, Martin has a fracture of the scaphoid of his left hand and Pineau has nothing broken, but has a sore right arm and shoulder. 23 kilometres from the finish, Josй Joaquнn Rojas and Vladimir Karpets (Movistar) were both involved in a fall, despite several bruises all around his body, especially in his coxis, for the Spaniard and a strong hit on his hand and left side for the Russian, did not have any other effect rather than the time loss at the finish. A near-crash few kilometres later took down, as well as Portuguese Rui Costa (with small bruises), also Movistar team leader Alejandro Valverde, but he regained the front. Luis Leon Sanchez (Rabobank) also crashed late in the stage and came in 4 minutes down. After x-rays he was told that nothing was broken, but did start this morning with braces on both wrists. There were no “DNS” on the start list, so good news. 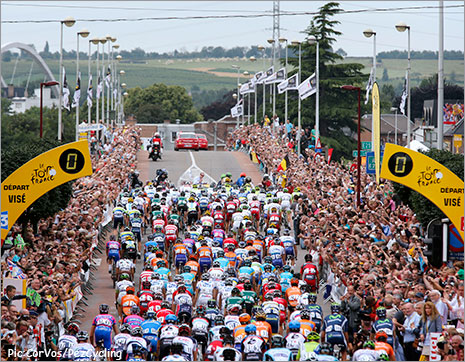 The field rolls out of Vise.

It was no surprise to see Michael Morkov (Saxo Bank-Tinkoff Bank) in the break of the day that headed up the road before the climb of the Citadelle de Namur. The move was started by Anthony Roux (FDJ-BigMat) and he was joined by Christophe Kern (Europcar) and Morkov in his polka dot jersey, with the three getting together with 180 kilometres to go. As the live TV kicked in at 150 kilometres out from Tournai the lead was around 6 minutes.

The Citadelle de Namur
On the run-in to the short climb, Argos-Shimano with Lotto-Belisol and RadioShack-Nissan were in control of the peloton as the three leaders ploughed on with them all doing their share of the work as the lead was 6:22. Kern set the pace at the bottom of the cobbled climb; Roux had a damaged hand and rode with it dangling of the bars to stop the pain of the road banging it about. Morkov came to the front well before the top and towed the other two to the line where he took the 1 point for the 4th Cat climb. 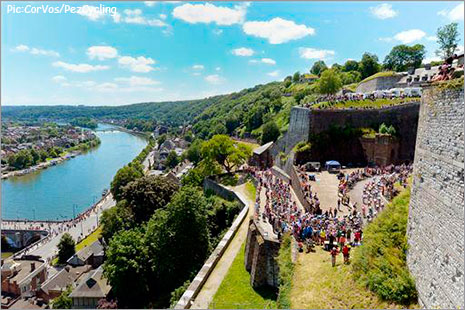 As the bunch crossed the line they were at 6:20 back and not in any rush to catch the three up the road before the big sprint in Tournai.

100 Kilometres to Tournai
As Kern, Morkov and Roux passed through the town of Sombreffe the lead had dropped under 5 minutes, Lotto-Bilisol and Argos-Shimano had been joined by an Orica-GreenEdge rider at the front of the bunch, but things were still fairly tranquil. 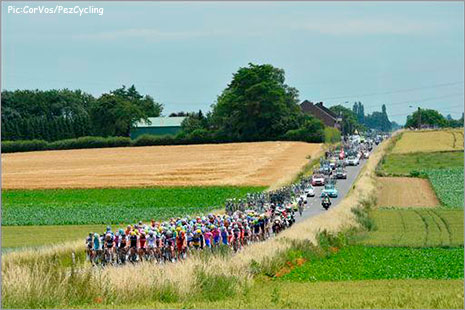 The sprint at Soignies, 54.5 kilometres from the finish, was won by Christophe Kern (Europcar) from Anthony Roux (FDJ-BigMat) and Michael Morkov (Saxo Bank-Tinkoff Bank), the three rolled though without battling for the honours. The peloton was led out for Peter Sagan by a Liquigas-Cannondale team mate, but the Australian pair of Matt Goss (Orica-GreenEdge) and Mark Renshaw (Rabobank) pushed through taking Mark Cavendish (Sky) past Sagan, with 20 points on offer for first it was well worth going for the lower places. The gap was down to under 3 minutes.

Less than 30 kilometres left to go and Anthony Roux thought it was time to head off on his own and at 22 kilometres out he had a gap of 50 seconds on the peloton which was spread across the road with just about all the teams on the front. 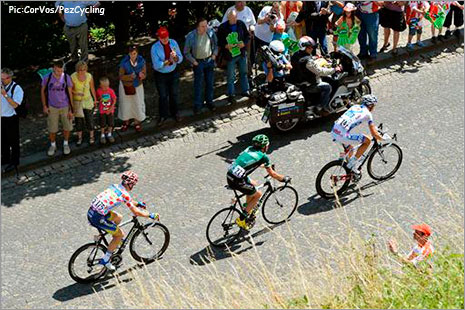 The Last 20 K
The run-in to the finish had nothing to worry the lead-out trains, of which there could be up to a dozen team’s all wanting to bring their sprinter to the front first. At 14 to go, no one team was in control as Roux was brought back in to the fold. Omega Pharma – Quick-Step took to the front with most of the Orica-GreenEdge team ready to make a move for Matt Goss. Marcel Kittel (Argos-Shimano) was in trouble and couldn’t hold the pace as was the injured Tony Martin and Luis Leon Sanchez.

The wind was coming from the left of the peloton as Rabobank and Lampre-ISD to over at the front with Sky not too far away.

Under the 5 kilometre to go banner, BMC had Burghardt in front of Evans, next it was Sieberg for Lotto-Belisol again for Griepel as the road narrowed through a bend.

Into the last kilometre Orica-GreenEgde wanted the front; Lotto had different ideas for the big German Griepel. What they probably didn’t realise was that they had Mark Cavendish sneaking onto their train. The World champion moved out, engaged a higher gear and shot to the front past the thundering thighs of Andrй Griepel. 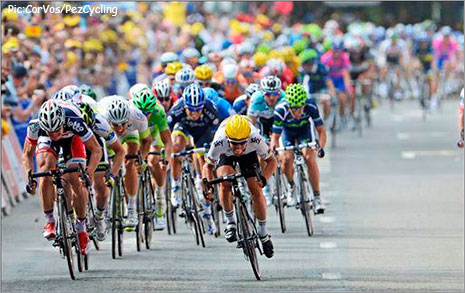 We now know that the Sky team does not have a lead-out train for Cavendish, but does it really matter? He can find any one of 10 other teams to latch onto. After the finish Cav pointed out that he knew the finish and saw that Oscar Freire (Katusha) was moving forward so didn’t panic.

At the line Cavendish won by half a wheel from Andrй Griepel (Lotto-Belisol), with Matt Goss (Orica-GreenEdge) in third, young gun Peter Sagan came through in sixth finishing in front of top sprinters JJ Haedo, Renshaw and Farrar. 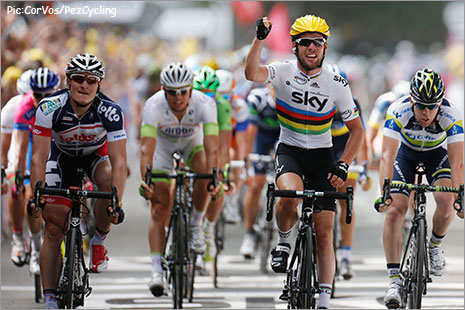 Cancellara still in yellow and Peter Sagan has the green & white jerseys and Morkov in the KOM.

Don’t forget to check out Gordan’s daily reports from ”Roadside”. 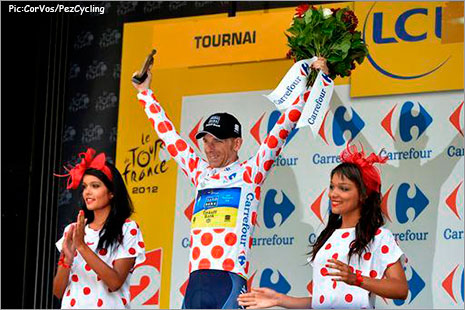 Look at that! PEZ favorite, Michael Morkov, is in the dots!