Race Report: Another sprint stage at the Tour saw the win go the way of Peter Sagan once again but it was far from an easy day as a series of crashes rocked the field.

An almost dead flat 207km ride across the north of France greeted the riders today with all experts, riders and fans alike predicting a mass sprint at the finish in Metz. Dave Zabriskie (Garmin-Sharp) mustn’t have got the memo though as he took off in the opening 10km to be quickly joined by Davide Malacarne (Europcar), Romain Zingle (Cofidis) and Karstoon Kroon (Saxo-Tinkoff) who would make the day’s long breakaway. 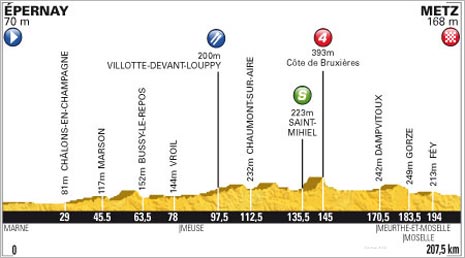 With just one small climb on the program and large roads all signs pointed to another bunch sprint today.

The peloton was seemingly happy with this quartet and were rolling along relatively slowly when a big crash occurred after 35km with many big names involved including GC outsiders, Lieuwe Westra (Vacansoleil), Robert Gesink (Rabobank) and Alejandro Valverde (Movistar). Also involved was today’s favorite for the win, Andre Greipel (Lotto-Belisol) who went down heavily but luckily without breaking anything – except for some French bitumen that is.

Thankfully all the fallers were able to remount and continue on today’s stage but for many involved that wasn’t to be their last fall of the day. 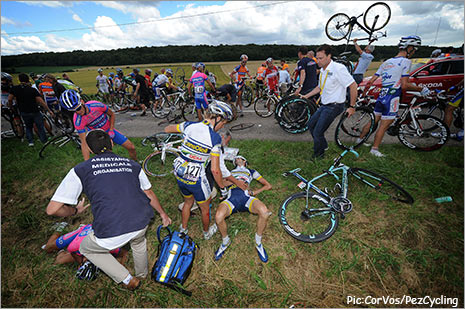 Meanwhile up in the break the quartet were working well but the gap never got higher than 6 minutes with Orica-Greenedge in particular conspicuous on the front of the peloton making their intentions very clear – today was to be Matty Goss’ day. Their Dutch duo of Sebastien Langeveld and Pieter Weening kept the break in check and then their sprint pilots Baden Cooke and Daryl Impey took over for the intermediate sprint where Goss duly won the race for 5th over the line ahead of Cavendish and Sagan.

After the sprint the gap to the break dropped to just two minutes as they approached the only climb of the day, the Cote de Bruxieres a seemingly innocuous 2.7km climb with an easy gradient of 3.8%. The break cruised over the climb no problem with Zabriskie taking the 1 KOM point on offer but back in the bunch there was carnage again with another crash that occurred as they were climbing up the hill. Greipel was unfortunately caught up in it again, apparently landing on his injured shoulder from the earlier crash and Gesink and most of the Rabobank team also got tangled again. Once again there were apparently no serious injuries and everyone eventually got back to the peloton but Lotto’s director was interviewed 30km later during the stage by France television in which he reported that Greipel would not be contesting the sprint for the stage victory due to his injuries. Other sprinters that would not be contesting the sprint today would be Tyler Farrar (Garmin-Sharp) and Oscar Freire (Katusha) who were both dropped from the peloton with 28km to go.

No one would be of course contesting the bunch sprint though if the break wasn’t caught first and the guys from Orica-Greenedge were determined to do that turning up the pace on the front of the bunch. 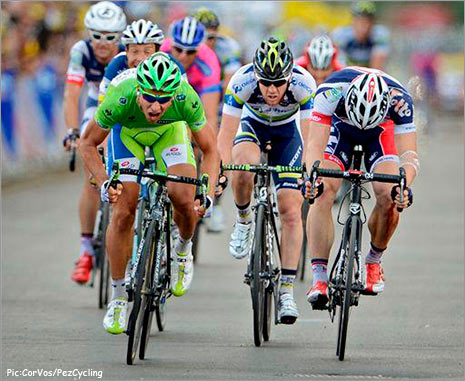 With 25kms to go all hell broke loose on the road as a huge crash split the field into pieces and saw the GC hopes of Ryder Hesejedal (Garmin-Sharp), Alejandro Valverde (Movistar), Pierre Rolland (Europcar) and Franck Schleck (Radioshack-Nissan) fall by the wayside as they both lost a lot of time but were able to finish the stage. The same couldn’t be said though for Davide Vigano (Lampre),Mickael Astarloza (Euskatel), Wouter Poels (Vacansoleil) and Tom Danielson (Garmin-Sharp) who all had to abandon the race with their injuries.

After the crash, Orica-Greenedge didn’t let up on their furious pace and they subsequently caught 3/4 of the break with 3km to go whilst Zabriskie kept it going to the 1km banner. It was at this point that Lotto-Belisol took over the train as Greipel decided that in this reduced peloton of 40 or so riders that was minus Cavendish he would in fact sprint today. 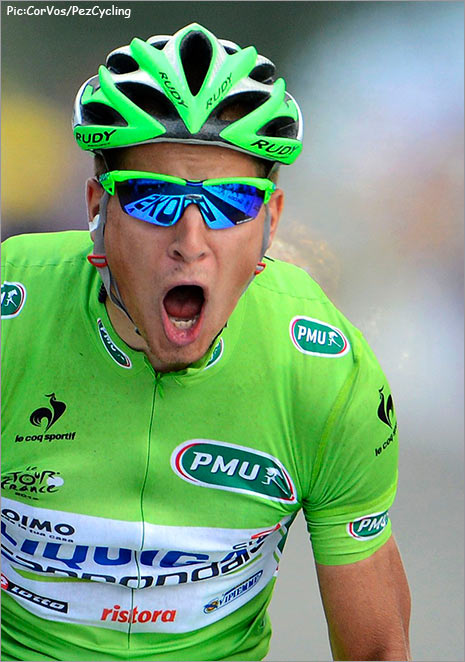 Greipel launched his sprint, Matty Goss did the same but it was Peter Sagan who proved to be the quickest taking his third win of the tour and his first from a true bunch sprint – is there anything he can’t do? Tomorrow’s mountain top finish should surely be too much for him but with his current form, who knows?