Race Report: A superb solo win by Luis Leon Sanchez was just rewards for the hard working Spaniard but it was the controversy of more than 30 punctures on the last descent of the day back in the peloton that had everyone talking. 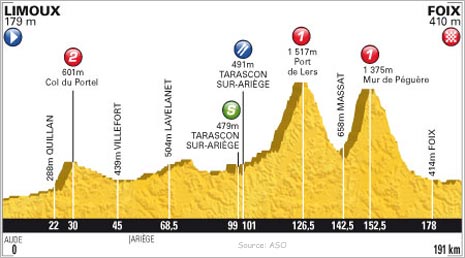 First day in the Pyrenees saw just three climbs on the menu and unfortunately no summit finish.

Not for the first time in this year’s race it was the green jersey of Peter Sagan who was the most aggressive at the start, getting away a couple of times only to be re-caught. It was after the Col du Portel where Sagan eventually got away for good though with 7 others for company; Gilbert (BMC), Gautier (EUC), Izaguirre (EUS), Minard (ALM), Vorganov (KAT), Casar (FDJ), Sanchez (RAB) and Velits (OPQ).

This group quickly pulled out a huge lead of 15 minutes as they took on the first big difficulty of the day, the Category 1 Port de Lers. Absolutely no attacks occurred on the climb amongst this group as they tempoed up the climb and this was also the case back in the peloton as Eisel set a steady pace for his team leader Wiggins. 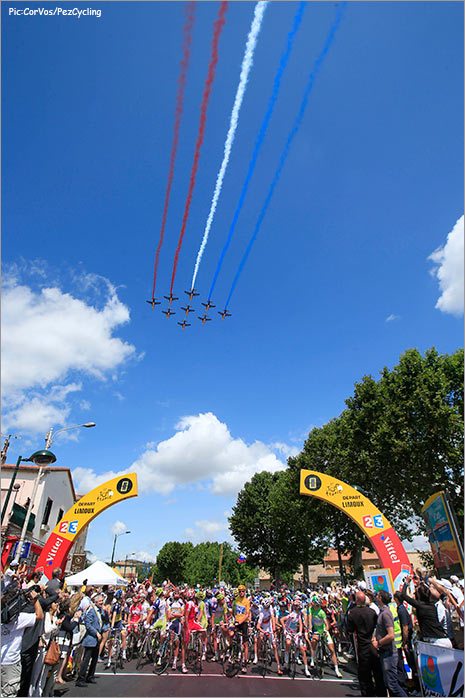 Nice way to start the day, no?

25km later on the 2nd big climb, the situation was very different in the break as the attacks started in vain to try and distance the fast finishers of Sagan and Gilbert. Sandy Casar was first man over the top, followed by Izaguirre and the very impressive Sagan just a few seconds back. These 3 quickly came together on the descent with Sanchez and Gilbert also coming back a few kilometers later making it a group of 5 out the front to contest for the stage win.

Meanwhile back in the peloton nothing at all happened on the climb but that all changed at the summit and on the descent as there was a plethora of punctures. Cadel Evans in particular was struck with what at first seemed like just plain bad luck as he punctured, once, twice then a third time! He subsequently lost contact with the Sky led peloton and in his chase group, teammates and other riders alike were puncturing everywhere. Explanation? According to the director of Ag2r – tacks on the road. Someone spread tacks on the road on the descent after the passage of the breakaway which caused this chaos and a nightmare end to the day for Cadel and his team. 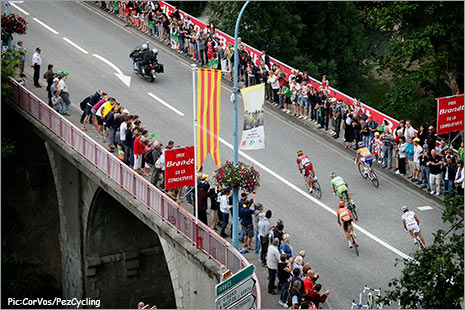 Back in the break though no such problems were occurring, they were still over 15 minutes ahead of the peloton but Gilbert, Sanchez, Izaguirre and Casar still had the big problem of how to beat Sagan? Luis Leon Sanchez had the answer – attack solo 11km before the finish and put in a fine time trialling show! It was a great ride by the likeable Sanchez and a welcome change of fortune for his Rabobank team who up until today have had a very forgettable tour. As soon as he got a gap he settled into his time trial position and simply rode away from the four chasers for a well deserved win. 46s later Sagan led home the rest of the break to further cement his green jersey dominance with Sandy Casar taking third.

15 minutes back down the road Cadel and his entire team were still chasing hard to get back to the peloton but they were making very little progress as Liquigas and Lotto-Belisol were driving the peloton very hard to try and bring back Pierre Rolland (Europcar) who had attacked on the descent. With just 10km remaining, Rolland was caught so Liquigas turned off the gas and a very relieved Cadel and co. made their way back into the peloton to finish the stage at a processional pace safely in the peloton. 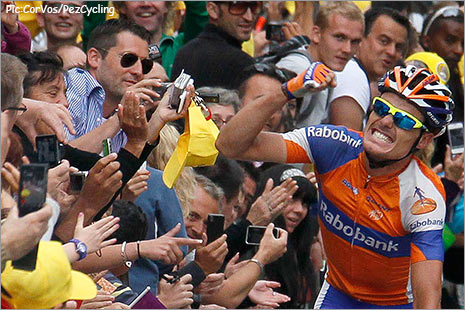 It was a happy day for Sanchez and his Rabobank team.

It was certainly not the end to the stage that was expected by the peloton who up until then had been having a very gentle first day out in the Pyrenees but an exciting end all the same. Let’s hope that tomorrow’s transistion day which seems destined for the breakaways proceeds without any crazy ‘human factor’ incidents. Keep it tuned to Pez!

Tour de PEZ: The Sprinters And Their Steeds