Tour Analyzed: A Day Of Exploits!

TDF St. 10: Arguably the most exciting day of this exciting Tour de France, Stage 10 from Macon to Bellegarde-sur-Valserine was action-packed and full of talking points, with two races going on at the same time, one for the stage and one for GC places. Lee Rodgers is back to cast a bloodshot eye over the proceedings.

Exciting indeed. This was a stage that was being talked up all morning, with several top guys predicting correctly that a break would be allowed to go and promising not to let Wiggins and Sky have an easy ride to the finish. There is a feeling, it seems, amongst the challengers that perhaps Team Sky isn’t quite as strong all the way down as it appears, a feeling encouraged by the fact that Porte and Rogers fell away the other day a little too easily.

I heard that though and didn’t quite follow the logic. It appears that Sky have no problem keeping things under control on the flats, and once things do go uphill Wiggins looks good, as does Froome. No other GC rider has anything even remotely close to the support that El Wiggo can rely on from his teammate. It’s also possible that Rogers and Porte are being rested, in reserve until the high hills rear their majestic heads later on.

And with Froome having also beaten Evans in the TT, even if Bradley does crack, they have a guy who could, quite realistically, win the Tour himself. Chances of Froome being at Sky next year? Decreasing by the day I would suspect.

Keep Your Cool
Sky’s number one did himself no favors though by having a hissy fit when that reporter asked him if he used special chemicals on his sideburns or whatever it was. Bit naive that, I felt. Of course people will suspect, you are kicking ass – as is your teammate – in the toughest race in the world, and it is, after all, a bike race. There have been precedents. Plenty of them. Did his rivals notice that tantrum? You bet they did, and they’ll have read it as a sign that the race leader is not as unflappable as he’d like them all to think.

Nice Moves
Today’s race had a perfect textbook move, with BMC and Liquigas-Cannondale sending their men up the road in that large break that formed after a few kilometers. Peter Sagan showed he isn’t afraid to bury himself for the team (and pick up a few Green Jersey points if he can too) by launching out of the pack first chance he got.

His DS would have planned that the night before, telling Sagan (and the others if they got chance) to pound it from the front to try to get clear and away up the road. Why? Well it wasn’t for TV time, but a move that allows the team leader – in this case Nibali – to have a teammate ahead that he can try to hook up with later. We saw that work perfectly today.

Sagan began to drop back towards the end of the stage, Nibali descended like a meteor to join him, and Sagan then gave it everything to help the Italian extend his lead over the GC group. In the end it came to nothing but it was a beautifully executed move.

Sexy And I Know It
A word on Nibali’s descending prowess. The guy makes riding a bike downhill just downright sexy. He got a 30 second gap on the world’s best riders in about 8km. It was just lethal. I’m a decent descender but when you’re racing with a very, very good downhiller like that it is terrifying, trying to stay on their wheel. They just see the corners clearer, sooner, intuit the line they need from way off, and meld with the bike better than other guys. It was real edge of the seat stuff from Nibali and he earned a new fan in me today for that ballsy ride.

In the interview at the end of the stage the Italian rued not gaining time but took the time to call this “a beautiful stage.” Quite right. 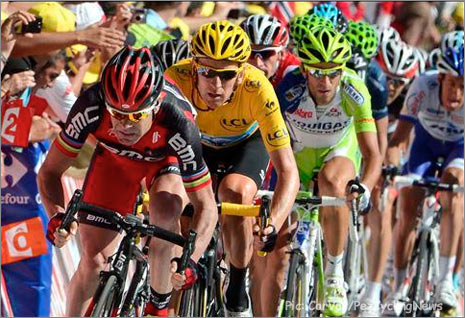 Chipping Away
Evans would have been quite happy to see Sky getting a run for their money. For him, ideally he’d have liked to get a few seconds but it was never going to happen today, but to see those other guys popping off the front and stretching Sky was the next best thing. In a race as long as this one, every little burst, every wee spurt of energy is a withdrawal from the bank that might just mean a more complete depletion later on. It could be the difference between being gapped on a summit by three bike lengths that then grows on a descent, or could lead to a lack of concentration that results in a puncture or a crash on another day. 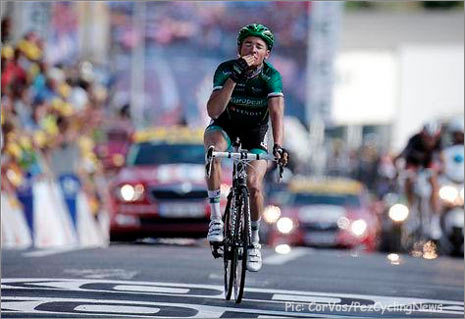 What a great day this was for the spectators. Boasson Hagen working like an ox again, Nibali busting out the jet engines, Voigt rolling back the years with all the cheekiness of a 15-year old prodigy messing with the fogies on a club ride, and Voeckler, that little beauty, stealing the show with aplomb.

The riders might not like him generally, and you can see why ‘cos he never lets up. He’s like that annoying kid that never stops asking questions. But, if you love bike racing and expect it be do or die, death or glory stuff, you gotta love the little elf.

In the interview was this lovely exchange:

Voeckler: ”I don’t care what people say about me.”

Interviewer: “I wish we had more riders like you.”