Stage 5: Not a lot happened but then a lot kind of did, but not really, and that makes no real sense does it? Another day for the doc and his fancy stretchy gauze, one for numb bums and even number commentators. It came to life in the end though and if you like crashes well you’re sadistic, but it was kind of exciting at the end. Just… kind of. Lee Rodgers has a look as Stage 5.

A quiet day today, you could say, with a bucketload of understatement thrown in. The highlight might have been the close-up of the yellow-helmeted Bob the Builder – er, I mean Bradley ‘Wiggo’ Wiggns.

The Mod was modeling quite a pair of sideburns there. Odd how Team Sky obsess over aerodynamics yet allow him to wear such frictional facial hair.

Word on the street has it that Wiggins spent a combined total of 17 hours in the wind tunnel in an attempt to find the most aero beard/moustache/sideburn combos and the current one he sports was found to offer the most drag of all, but he put his foot down and insisted on it, only being allowed to keep it after promising Dave Brailsford he’d blow-dry all excess water off his 3kg of daily lettuce leaves (he eats nothing else, it’s known as The Tortoise Diet – reduces you to a shell of your former self though, I’m told) before eating. 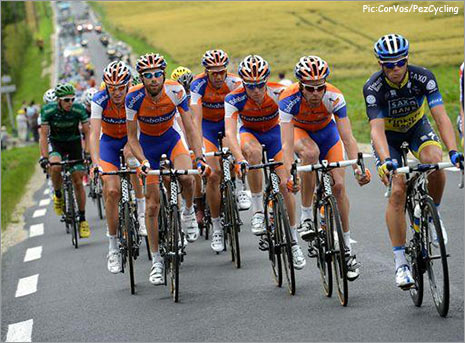 For the most part, it was a routine day for the peloton. Of course, routine goes out the window in the final ten kilometers…

Having said that today was rather dull, however, it’s different if you’re actually in the race. First off, 196.5km is never a walk in the park. It was hot, which always takes its toll, and for most of the race the route meandered through open countryside. Fortunately (for the riders anyway) it wasn’t windy, but there’s always a bit of tension in knowing that the winds could pick up and cause some havoc.

Being in the peloton all day when you’re going slow (the average was just over 41km/h) means that time drags, and with it concentration levels. As in any walk of life, down time can lead some to over-think or fret on things, whereas when the pace is high you have no time to think about anything but the bike. On the plus side, there’s a lot of chatting that gets done when it’s slow, and you gradually end up making a few friends here and there in the pack and reacquainting yourself with others.

For the directeur sportifs back in the cars the day is all about waiting. They’ll have correctly predicted that a break would be allowed to go and then told their boys to keep an eye on the wind, be sure to drink enough, and, most difficult of all, to not crash. 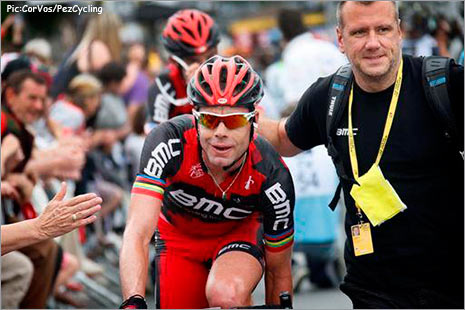 GC favorites Brad Wiggins and Cadel Evans have reason to smile, as they make it through a little bit further into the Tour de France each day, unscathed.

The riders’ propensity to hit the tarmac seems to increase every year of late. Are the riders getting worse at handling their bikes? No, it’s just that there is no one dominant lead-out team anymore, not since HTC disbanded, and that more guys are up there for the finale. Today there was an aerial shot that showed the peloton chasing down those forlorn leaders, with Sky on the left and BMC on the right, and Radioshack in the middle, looking a little like a rolling trident. No one team had the leverage to really bust it and stretch the pack. One guy pushes another, a wheel hits a stone maybe, and bang, suddenly guys are ripping perfectly decent flesh from their skinny bones. 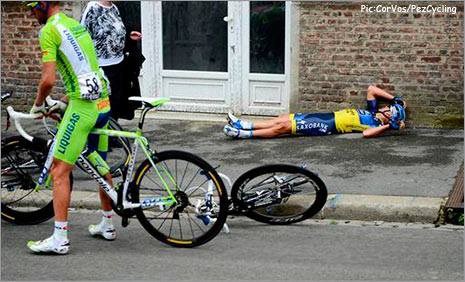 It was a case today again of another day, another breakaway. Unlike the guys n the peloton you’ll just about never see guys in the break chat. For one thing you’re constantly swapping off and so it’s hard to talk, but the main reason I guess is that you become so intensely focused on your pedal stroke, maintaining cadence and rhythm, making sure you’re doing work equal to the others and vise versa and trying to preserve energy.

That last concern is so overwhelming in a long break that it feels, at the odd time when you do say something, that vital energy is escaping when thoughts from into words!

They’ll have known, those escapees, that they were almost certain to get caught but the TV time is always welcome by the management, sponsors and of course the riders’ families and friends alike. Despite being famous in their own rights those guys will be watching forthemselves later on TV most likely, and taking calls from excited friends. 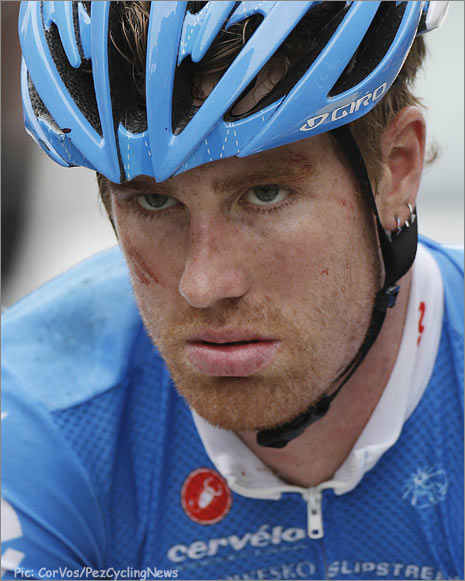 Farrar hit the pavement for the third day running.

Every domestique dreams of that day when the dream comes true. The peloton naps, screws up, allows the break an insurmountable lead and the guy holds off his companions and the dream suddenly becomes reality and he never has to pay for a beer again at his local cafe.

They were caught though in the end, and some crashed but all the GC guys look ok. Radioshack will be thrilled again to get Cancellara through the day, Wiggins looks solid and Evans quiet and out of harm’s way. Lotto-Belisol are emerging as the train to beat and it was nice to see big ol’ Greipel humbled by the fact that he’d win again in the grandest tour of them all. The Grand Old Dame will always be bigger than any one rider and it’s touching to see a star starstruck by the very race itself. 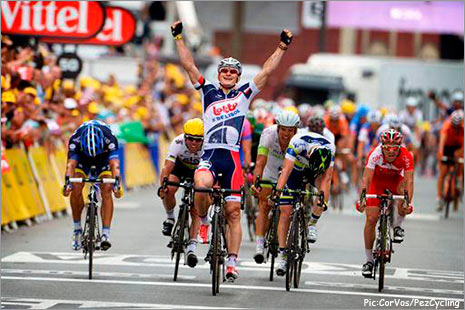 Tomorrow is also flat and it will be largely the same I should imagine as this nervous peloton gets closer to the first big climbs of the Tour and intent on saving the legs for that impending TT. Of course something mad could happen and all hell could break lose – or, worst luck, it could be just like today…