TDF St.16: Imagine the scenario. You’re tucked up in bed in some dingy French hotel after a hard day in the mountains. You’re racing in The Greatest Show On Earth. You feel good, great even. Your legs are recovering well and you feel stronger by the day. You are, in fact, quite possibly the strongest guy in the race right now. Lee Rodgers delves into the difficult life of super domestique Chris Froome and ponders the big question – attack the boss or no?

You know you can win this thing. Only problem is, you’re the team #2, and your team leader is also the race leader. Welcome to the world of Christopher Froome. He’s been saying the right things (mostly) and pledging loyalty to the Sky cause, but his attack on Thursday was worth a thousand words. It reeked (Wiggins will agree with that first part of the sentence) of irritation and no little annoyance.

Then there was the finish, when Froome again let the world, the race and his leader know that he was flying.

“I think Bradley is in a better position to win the Tour than I am. I have to do what the team wants me to do. He’s just as strong as me, and stronger than me in the time trials. I’m here to help Bradley,” said Froome.

Yet he also told l’Equipe that the ride he was putting in for Wiggins was “a very, very great sacrifice.”

Froome as well as Wiggins are telling anyone within earshot that it’s a case of ‘Wiggins this year, Froome next’, but it doesn’t really work like that in bike racing. Froome knows that and this is why he will be wrestling with himself in his own head, trying to convince himself that he’s doing the right thing. 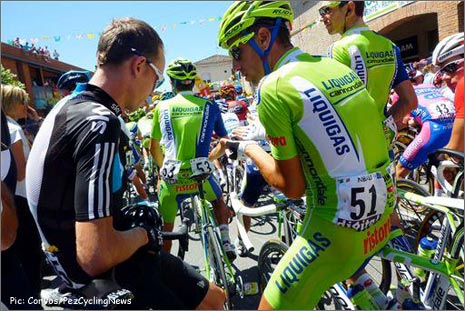 Talking tactics with Nibali before the stage?

We saw something similar with Tejay van Garderen the other day, when he rode past team leader Evans after the carpet tack incident. The young American is in the White Jersey and we saw the moment very clearly when his individual interests usurped his duty to his leader.

It’s the nature of cycling that riders are, almost always, driven from deep within by individual desires. We are team members by dint of the way the sport works, but trust me, nothing feels like winning yourself. Froome knows this and, it has to be said, many would understand if he was to attack.

Froome rode brilliantly again today to neutralize Nibali but there was a moment when he caught the Italian yet pulled ahead of him and increased the pace. For a split second it looked like he just might go, but no, he settled back down and continued to work for the Yellow Jersey. 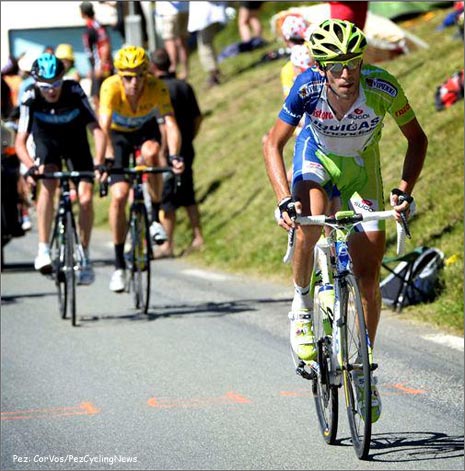 Froome played the loyal teammate again today, chasing down Nibali’s attack. I wonder what the little voice inside his head was telling him to do though?

And of Wiggins? Well, if he can’t beat Froome by much in the last ITT, will his win be valued as it should?

This has whiffs of Hinault & Lemond, though one can’t imagine Froome ‘doing a Badger’.

Some observations on today’s stage. First of all, Thomas Voeckler riding without his radio earpiece. Why would you do that, put yourself at a disadvantage, when others are using them? Well sometimes you just want to ride. Zero distractions, head in the tunnel, balls out and angry. He looked angry today, and he was, a veritable compendium of facial tics, smacking spectators out of the way, annoyed by the bad rep he and his team get in the peloton – but then with Rolland very publicly peeing in the pool the other day when the leaders were waiting for Evans, what do you expect?

Oh and yes, brilliant ride from the prickly Frenchman. “Cycling is an obsession,” he managed to squeeze into his interview at the end. Indeed.

Cadel, oh dear, you’re looking tired fella. Under massive pressure on the Col d’Aspin and then dropped again on the Peyresourde. Still fought, still battled and grimaced, but he got served, no bones about it. But what are you gonna do? Sometimes you just haven’t got it. Could it be age? Or just a bad Tour? Feels like age, cruel as that is. 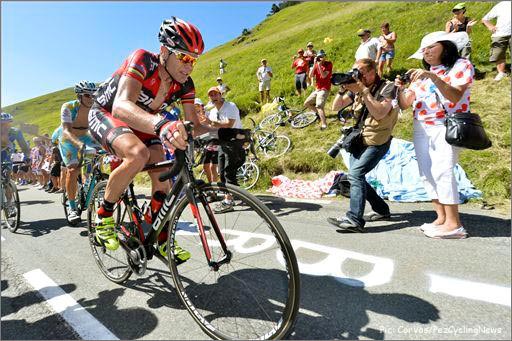 Evans is a shadow of his attacking self from last year and is looking very tired indeed. He slipped from 4th to 7th today with his domestique now one place ahead of him on GC.

Nibali. Bringing the ruckus again, gotta respect that. He knew that he could tear things apart by putting Froome and Wiggins under pressure, but it was, it has to be said, great team riding by the English pair to pull him back so easily.

Tomorrow is gonna be huge. In every respect. Will BMC ride for Tejay? Nibali will go again. And Wiggins and Froome? Let’s see, shall we?

Lee Rodgers leads a double life as a pro racer for UCI Continental team CCN, racing the UCI Asia Tour as well as some European events, whilst moonlighting to pay the rent as a freelance journalist. Highlight of his cycling career has been winning the Singapore National Champs, both road race and the TT, as well as claiming the Green Jersey at the 2.1 Tour de Taiwan this year, and naturally, writing for PEZ. His writing has appeared in several magazines and websites and he’ll work for food, so long as it’s full of high-quality carbs… and for Belgian beer, he informs us.

Tour de PEZ: Across The Pyrenees!