Stage 2: Rumors abounded before the Tour’s first real sprint stage that a certain Manxman had lost his edge as a result of slimming down in his bid to capture the Gold medal at the upcoming Olympics, but in his own inimitable style the World Champion spanked said rumors right out of the stadium by claiming a breathtaking sprint. What more can his rivals do to stop him? Not much, to be frank. Lee Rodgers offers up his views on the day.

If you were watching Eurosport’s coverage of today’s stage you’d have heard Robbie McEwen talking about his role as an adviser at Orica-GreenEdge, offering up a fascinating insight into just how much value the sprinters’ teams place on the reconnaissance of the final kilometers of flat stages. The interview also revealed something else that it never intended to – the impact that Cavendish’s superiority has had on his rivals’ preparation.

McEwen said that he would leave the team hotel early in the morning to drive to the finish, then get on his bike to ride the last 5 kilometers repeatedly, first slowly, taking notes of every bump, every nuance in the road, and then ride it full gas to gauge the speed that his guys can hit corners and to tell them the best place to get to the front. 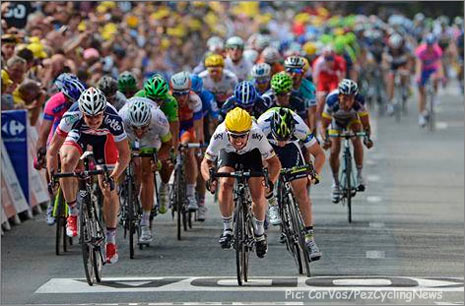 Cav said after the stage: “It wasn’t too technical but there was enough technicality to make it a bit chaotic with all the other riders there. Normally I’m out of the way in the front but today I could kind of freestyle. It wasn’t as windy as I thought it was going to be and that didn’t play as much of a factor.”

Not only do these advisers then relay the info back to the sprinter on the team but they also chat with the guys who will form the lead-out train, giving each designated rider the low-down on the stretch of road that they’ll be expected to be at the front on.

The retired rider helping out with training and advising in stage races is nothing new but with Cav being recognized as the fastest in the world and almost unbeatable if the conditions are right for him, the other teams have taken a leaf out of Sky’s book by meticulously searching for that elusive 1%. It was that search for small, almost imperceptible improvements in each and any area, from clothing to diet, sleeping routines to riding position, that brought such resounding success to David Brailsford’s British track team and that has been paying off in no small measure for Team Sky.

That kind of intricate prep is a luxury that us guys at Continental (and even Pro Continental) level don’t have. Instead we’re very often surprised by a finish that bears no correlation at all with what’s in the race book! Yet for these World Tour guys we’re talking about much bigger budgets and much bigger rewards, driven by the knowledge that it’s all about the difference between winning and losing.

Winning could mean the survival of the team next year, or the difference between a renewed contract and the door. It’s that brutal.

So there was McEwen very amiably chatting about how he relayed the info that the wind in the final 5km was niggling at best but coming in from the right to left, which reminded me of a certain Manxman at last year’s Worlds. Cavendish had read the wind coming in from the right at the finish line on previous laps and knew that in the final sprint everyone would swing left, so he just sat on the right and opened up with that devastation he carries in those thighs and snuck it, whilst everyone else lost a sliver of a second by swerving right to left.

Which brings us to the finale today. Cavendish is almost completely without teammates. Lotto-Belisol are rampaging in those final kilometers for Greipel. Orica-GreenEdge are doing their best to bring it to the table like the big boys (despite that horrible kit – sorry, Fashion Police are in the house…). 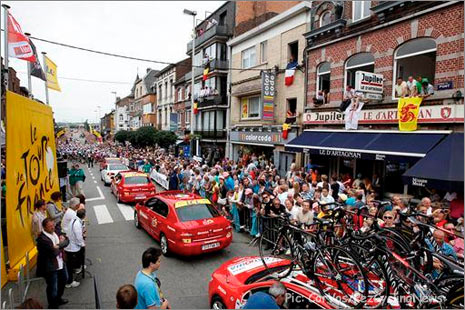 But you know what, those rumors about the demise of Cavendish were massively erroneous. And despite it being true that Lotto-Belisol and Orica do have the strongest trains in the race, and despite the painstaking final kilometers analysis, they just don’t have the guy who must be close to – if he isn’t already – the greatest sprinter of all time.

He bugs me, annoys many, pisses off more than quite a few, yet he is just unfathomably good. Irrevocably brilliant. 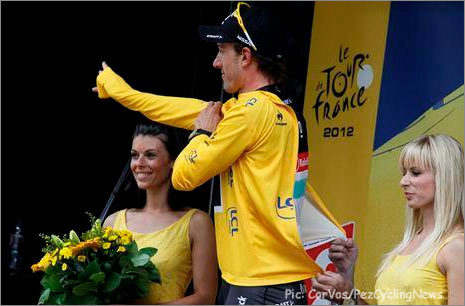 A word about RadioShack-Nissan-Trek. A team that seemed to be caving in upon itself with the problems between the manager and the Schlecks, the lack of results early season and the withdrawal of Andy could have truly become despondent upon the news that Johan Bruyneel wouldn’t be allowed to attend the race, yet now the whole Tour squad must not only be rightfully proud of holding Yellow but, one would presume at least, resolutely determined to hold onto it as long as possible.

However if anyone believes that Bruyneel is sunning himself on a sandy beach somewhere and sipping a Pina Colada and worrying about getting suncream in his hair-sprayed quiff, then they know nothing about the hugely competitive spirit of the most successful manager the Tour has ever seen. Trust me, he will be pinging texts, emails and haranguing those poor sweaty souls in that team car constantly with instructions at all too regular intervals.

And just how much should we believe that Frank Schleck really believes he can’t win this Tour? Well, unless there’s a sudden seal-type cull on genuine GC contenders, he won’t, but with younger bro Andy absent, he’ll never have a clearer opportunity to show us what he’s got. Just how doggedly RadioShack fight to hang on to Fabian’s Yellow will reveal a great deal about their faith in Frank.

If it’s arses on the rivet all this week for Voigt and co., we’ll soon know.

What’s Ahead
This already fascinating Tour moves onto Stage 3 tomorrow and potential mayhem. There’s a cobble or two to be negotiated but it’s going to be the last 60km where things could fall apart for several riders, and open up for others. No less than 6 climbs await the pack, all either 3rd Cat or 4th, with a ﬁnal hike up Boulogne sur Mer looking good for the likes of Gilbert, Evans, and all those other little punchy fellas that can rip the legs off a bull on anything that looks nasty enough to give us average riders the fear of Eddy.

It’ll be pure chaos in the caravan too, with the DS’s freaking out left right and center, trying to peer ahead up twisty lanes and ﬁghting to get up to punctured riders.

Cancellara in Yellow after tomorrow? Maybe the Fab/Frank dilemma will sort
itself out naturally. Deﬁnitely one to watch.