TDF St. 11: Today was expected to be a doozie and it did not disappoint. A brilliant win for Pierre Rolland despite a crash on the last descent, Evans going off like a party popper, Nibali rampaging but reeled back by a fantastic effort from Christopher Froome, Menchov and Gesink dropped like a pair of concrete-booted Mafia informers in a Delaware tributary, and Wiggins looking in trouble only to claw his way back by the end.

Lee Rodgers attempts to unthread the tangle that was Stage 11…

Usually my notes for each stage are around 150 words, but today they ran up to 426. It was that kind of day. Hard to decide where to begin but let’s take a look at the biggest losers. Before the start Evans was looking cosily esconced 1.52 back behind Wiggins, though he spoke of having to go on the attack or that he may as well settle for 2nd. He did indeed have a go on the second to last big climb but cracked on the final ascent. Back in 4th after today, 2nd now must look pretty desirable. 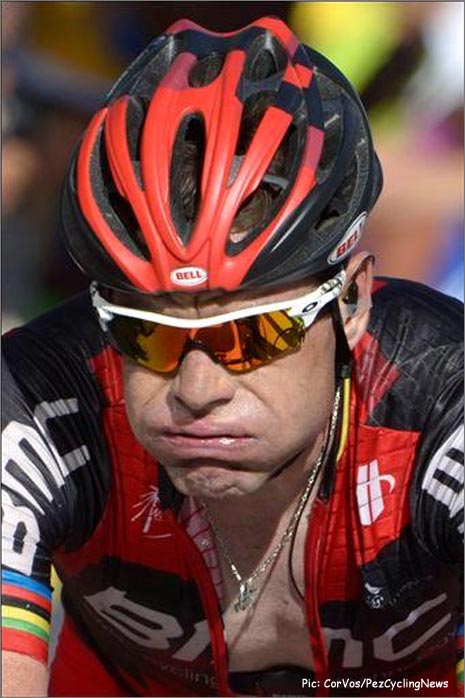 Much like Liquigas-Cannondale the day before, the BMC team plan was to send Tejay Van Garderen up the road to then join up with Evans. All looked fine until the defending champ blew a gasket in spectacular fashion. Evans is now almost a minute off Nibali in third. The irony of course is that Van Garderen had to give up his chance of staying with the leaders as he selflessly paced his captain up the final climb. 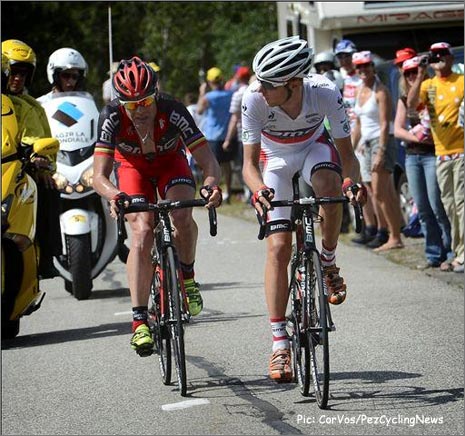 Shame for Cadel though, it didn’t go to plan today. Yet ‘life is what happens to you while you’re busy making other plans’, as John Lennon sang. Is Evans a Lennon fan? Probably not tonight.

The reality of being able to win but having to work for a designated leader is something that every good young rider has to learn, and it’s a bitter lesson. No matter how much the young super-domestique respects and is willing to work for his leader, when he gets into bed at night he’ll be reliving the race just like the 3rd Cat who blew a chance at the local crit does.

But in this case the difference isn’t that he made a mistake, but that team orders were called in. At the lower levels of pro racing, you seldom see that kind of selflessness. These guys are truly pro though – and of course a hefty salary and a decent contract help encourage loyalty.

It has to be said that Sky rode superbly for the majority of the race, keeping the leaders’ time gap in check with another mammoth effort by Boasson Hagen, then by Rogers and especially Porte, who, as I suspected, were most likely being held in reserve for this stage. 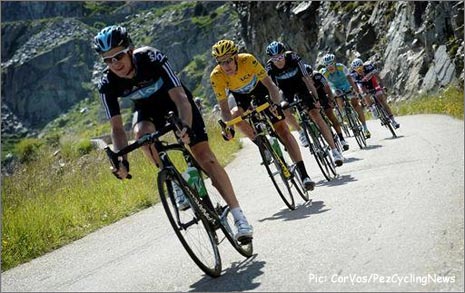 Once again Sky were to the fore again today.

But what occurred in the final kilometers when Froome attacked out of the blue in was quite incredible and most certainly not part of the Sky game plan. It was a move that isolated Wiggins and showed a crack in his armor. It has to be said, Froome looks better in the hills than El Wiggo. The runner-up in the 2012 Vuelta led the charge back up after Nibali’s attacks and yet still was the strongest in that select group.
Very, very interesting indeed. The other teams will be analyzing just what happened tonight back at the hotel and hoping to exploit the newly-gathered intelligence.
Froome might just get an earful from David Brailsford too. It was all over in a minute, with Wiggins finally getting back on, but it was a huge miscalculation.

Today truly ushered in the new guard at the Tour de France, one that we may expect to see star in the next few years of Grand Tours. Pinot was brilliant again in taking second, Van Garderen and Van den Broeck also looked very good, and Rolland was quite fantastic, his face etched in agony over the last kilometer but displaying great timing and a massive will.
The old guard? Well, decimation would not be an overstatement. Vino, Leipheimer, Basso, Valverde, Scarponi, Menchov, all just simply out-ridden.

Highlights of the day?

The idiot spectator running by the riders who tripped up and fell. I rather sadistically enjoyed that. It will happen again and someone may well lose a race as a result.
Rolland descending like my grandmother on a 70’s chopper (she’s dead by the way, God bless her, that’s how bad he was), crashing, but still winning.

Nibali showing us his intestines yet again. Finally, Wiggins’ pat on the back at the end for said Italian. Respect, for sure. 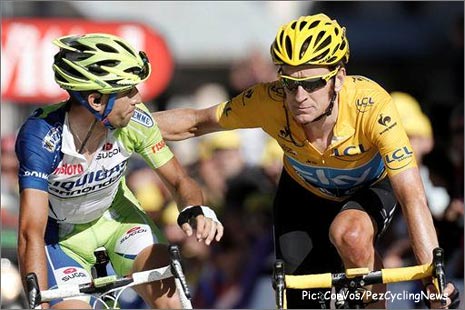 The riders will be tired tonight, watch a DVD, surf the net, read a book maybe, but the race will be there, in their heads, inescapable. Waking up won’t be fun, legs might have to be shaved, muesli, pasta and bread will be shoveled in to unwilling gullets, chammy cream will be dolloped on to ragged arses, and then they’ll head out to their bikes and get ready for another stage in the greatest bike race on earth…

…
Stage 12 is a tough one, with two 1st Cat climbs. They come early on though, but there is a little Cat 3 near the end that will encourage some of the top ten guys to have a go. Like just about every stage so far in this 2012 Tour, you’d be daft to miss it.
…

Lee Rodgers leads a double life as a pro racer for UCI Continental team CCN, racing the UCI Asia Tour as well as some European events, whilst moonlighting to pay the rent as a freelance journalist. Highlight of his cycling career has been winning the Singapore National Champs – road race and ITT – as well as claiming the Green Jersey at the 2.1 Tour de Taiwan this year, and naturally, writing for PEZ. His writing has appeared in several magazines and websites and he will work for food, so long as it’s high in quality carbohydrates. Belgian beer will also be considered, he informs us.

You can find him at [email protected]