Analysis St.14: Well that was an unbelievable day’s racing on Stage 14 of the 2012 Tour de France. It might be easier to talk about what didn’t happen rather than what did. Three things are for sure: Rabobank’s Luis Leon Sanchez is a happy camper tonight, Cadel Evans has reason to give a nod to Bradley Wiggins, and the Directeur Sportifs will be going to bed with a few more grey hairs than they woke up with. Lee Rodgers takes a deep breath and offers up his analysis of Stage 14.

Reports are coming in that pin tacks were scattered up at the crest of the final climb, causing the spate of flats that saw so many effected that the commentators were wondering aloud just how in the world this could be happening. Astana’s Kiserlovski is rumored to have crashed and broken his collarbone as a direct result of a puncture caused by one of these tacks.

If these reports are true, well, that is shocking. The perpetrators could have been looking at manslaughter charges had there been a fatal accident on the fast descent. Just shameful.

Onto the racing. Sagan. An explosion. A phenomenon. Just from another planet. Attacks from the off again, makes the break, rides brilliantly on the last climb (putting in a ride that spoke volumes for the head he has on his shoulders, to sit there and not panic as the climbers and Gilbert rode away from him at the bottom of the hill), consolidates his lead in the Points competition, and comes second. 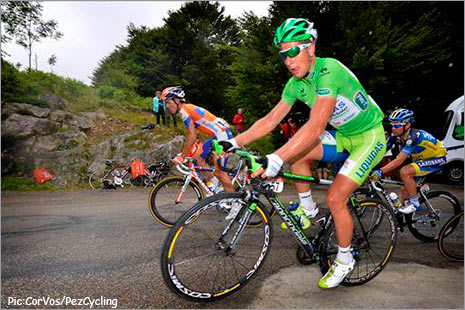 You know what? All those things they said about this Slovakian kid being the next massive thing? Actually, you know how they’ve say that about a lot of guys? Well Sagan exhibited abilities today that will have had fans around the world shaking their heads in bemused wonderment. Remarkable. Again.

Maybe he should have won though but, well you can’t have everything. OK, in his case maybe you can, but not all the time. Sanchez too put in a gutsy ride but if I’m honest it was somewhat of an anti-climax. I’m sure most neutral fans would have loved to see the break really battle at the end. Gilbert will feel most disappointed. Unlike him to not have a contingency plan.

How would Sanchez have felt over those last ten km or so? It’s a range of emotions that go through your head. The first is just sheer adrenalin as you escape and kick as hard as possible for those first 500 or 700 meters or so. Then, if you’re building a decent lead, you go through a series of emotive states, from belief that you’re going to do it, to doubt, to fear, and, depending on whether you actually will do it or not, belief once again, then extreme relief followed by jubilation, or a desolate, disconsolate frustration caused by the inability to win and the shortfall in your own abilities.

Experienced as he is he will still have been battling within his own head to keep going, to keep driving despite the tiredness and nerves he will have been experiencing.

It’s been odd of late, these breaks are not really ones that are rewarding too many domestiques for their years of hard work but rather escapes featuring stars. Gilbert, Sanchez, Sagan, pretty big names there that are far enough down on the GC to be allowed now to get away. Often a rider who has lost time on the GC and so lost any ambition he might have had for a podium finish or a top ten, will from then on lose even more time on purpose.

Then, when a stage that suits his style comes, off he goes out of the peloton on the search for a stage win. Back in the bunch they’re happy to see him go as he’s not a threat anymore to the GC. We saw that today with the top rider in that main break being several minutes behind Wiggins. 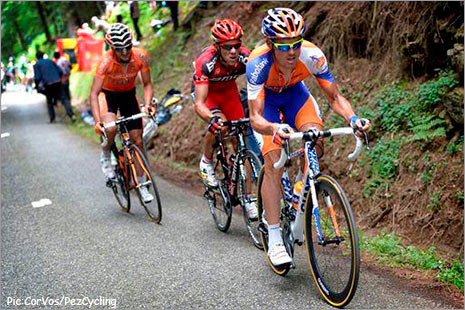 Luis Leon Sanchez has made a career of winning out of breaks – today’s win was his fourth at the Tour de France.

One rider who is a threat, at least on paper, to the top 3 is Cadel Evans. What a stinker he had, with those puncture troubles. At least he got back on after some furious chasing by his team, but seeing him wait for that rear wheel for over a minute and a half on the hill top, then to have to change again later as he flatted his front (and seeing a BMC staff member slipping like a Keystone Cop into the roadside ditch) was enough to either make you laugh at or cry with the guy, depending on how you take your prickly Australians..

One rider who did himself no favors was stage 11 winner, Pierre Roland. The Europcar rider committed a great cycling sin by attacking when Wiggins had called a ceasefire whilst Evans fought to get back on. Very cheeky indeed. Seems the youngster was then told by his team to sit up and wait for the Wiggins/Evans group. Still, Europcar’s reputation within the peloton as being a team with more than its fair share of wankers certainly wasn’t helped today…

The team cars and their inhabitants would have earned their money today, trust me. Must have been carnage back there!

Tomorrow’s stage into Pau shouldn’t be too tough, and we should see the sprinters battling it out.

*******
Lee Rodgers leads a double life as a pro racer for UCI Continental team CCN, racing the UCI Asia Tour as well as some European events, whilst moonlighting to pay the rent as a freelance journalist. Highlight of his cycling career has been winning the Singapore National Champs – road race and ITT – as well as claiming the Green Jersey at the 2.1 Tour de Taiwan this year, and naturally, writing for PEZ. His writing has appeared in several magazines and websites and he will work for food, so long as it’s high in quality carbohydrates. Belgian beer will also be considered, he informs us.

You can find him at [email protected]