Over the past 7-10 days, I had my doubts about Mark Cavendish. The World Champion had a great sprint to win Stage 2 of the 2012 Tour de France, but after that he faded out of the limelight as Peter Sagan and Andre Greipel led the sprinters’ brigade.

There were even times when he lost contact with the peloton when most of the other sprinters managed to stay on, despite coming into the Tour de France leaner than he’s been in previous years. Today, though, the nature of Mark’s game was revealed.

Before the Tour de France, Cavendish earned the first general classification victory of his career in a stage race. He won the ZLM Tour in Holland by being consistent, although not particularly explosive. Then he came to the Tour de France, but came in knowing he was on a team with the primary goal of delivering Bradley Wiggins to Paris in yellow. 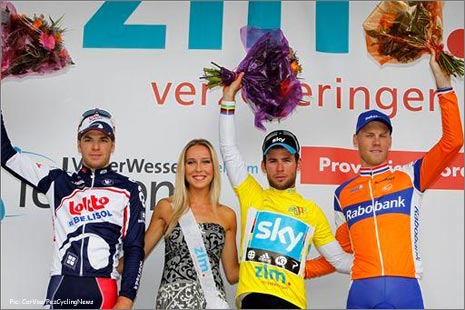 I’m not suggesting that Cavendish wasn’t giving his all in the early stages of this year’s Tour de France, but I think he came into the race with more of an eye toward the Olympic Games than Tour de France glory. There’s only so long that a rider can maintain top form, and for road sprinters I think that the period when they can have their absolute best performance is shorter than it is for climbers or GC riders whose performances rely less on explosive power.

Given the scenario presented to Mark Cavendish this year, it makes perfect sense that he might have knowingly diminished his chances for victories in the Tour’s opening week by shifting the timing of his performance peak to late July rather than early July. With Team Sky focused primarily on obtaining and defending the yellow jersey, he wasn’t going to have a well-drilled 6-man leadout train to deliver him to the finishing straight. And just one week after the end of the Tour, he has the opportunity to win a gold medal in a one-day race that only happens once every four years. If there’s any victory that’s worth giving up Tour de France stage wins for, it’s the Olympic Road Race. 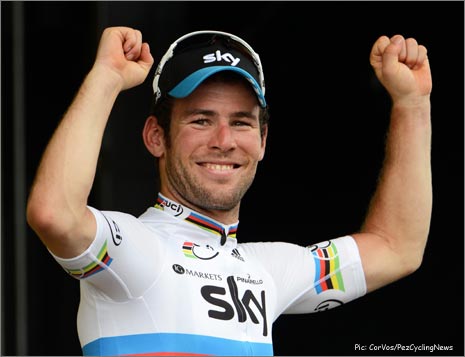 Cavendish’s victory in Stage 18 was more than just a simple sprint win, too. With the remnants of the breakaway still in front of the charging peloton in the final straightaway, Cavendish was forced to accelerate earlier than usual. He’s typically best when he can execute a short sprint starting from a high speed. Today he went from a high initial speed, coming off the wheels of Wiggins and Edvald Boasson Hagen, but he went from a long way out. The gap he created and the speed with which he passed Nicholas Roche and Luis Leon Sanchez were astonishing! 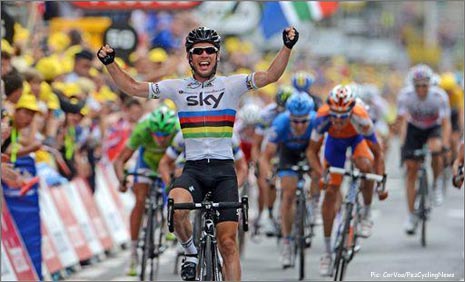 The sprinters who had previously eclipsed Cavendish (Sagan and Greipel) had strong finishes, and it was great to see Tyler Farrar in the mix at the front as well, but they were still left behind by several bike lengths. It’s the third week of the Tour de France, and it’s understandable that they are not sprinting as fast as they were in Week 1. No one is, not even Cavendish, but where he might have been on par with or even a little behind Sagan, Greipel, and Matthew Goss in the first week; he has more in the tank now than they do. Give the guy a few more fast days at the Tour de France, one more sprint on the Champs Elysees, and a few days to rest up, and he’s going to be a very difficult man to beat at the London Olympics!

If I’m right (I don’t work with Cavendish, so I don’t know how he actually planned his season) and he came into the Tour a bit before reaching peak form in order to peak in late July, then Cavendish has some stones. Pro cycling is unpredictable and you can never count on the fact that what you don’t win today you might win tomorrow. It takes a lot of confidence and maturity to stick to the type of Olympic preparation plan I suspect Cavendish has executed.

Personally, though, no matter how strong Cavendish is or how well-planned his preparation, I’m still rooting for Team USA in the Olympic Road Race. Good thing American sprinter Tyler Farrar appears to be finding good form as the end of the Tour de France approaches, too…