Analysis Pre-Pyrenees: As the peloton rests today in the foothills of the Pyrenees, the Tour de France is getting set for Act 3. We saw the chaotic flat stages and decisive time trial from Act 1 in the first week. A series of medium mountain stages and two big days in the Alps punctuated Act 2, and now the final act looms ahead. The third week of the Tour de France can be full of surprises, especially when it’s set up like it is this year.

Two back-to-back high mountain stages in the Pyrenees are difficult, but not an unusual run through the Tour’s second major mountain range. In some years the race adds a third high-mountain stage to one of the two ranges, and that third day is often when you see at least one major Tour contender crack big time. When there are two days in the Pyrenees, the racing is sometimes more aggressive. The climbers have fewer opportunities to take advantage of, so there’s an increased sense of urgency. And with two high mountain days instead of three, you can’t rely as much on the cumulative climbing to wear down your opponents and soften them up for a big attack. 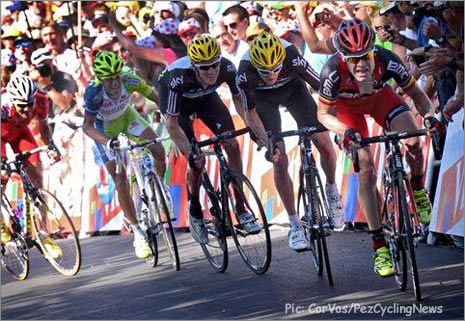 Expect both Evans and Nibali to come out fighting for the final two high mountain days.

Prognosis: Attacks!
With Bradley Wiggins and Team Sky so firmly in control of the race, some people may wonder if the next two days in the Pyrenees will be a dull procession of tempo riding up major climbs. I don’t think that’s going to be the case. Bradley Wiggins looks strong and up to the task of defending the yellow jersey in the mountains, but his lead is not so large that he’s entirely out of reach for a rider like Vincenzo Nibali. The Liquigas-Cannondale leader has shown the willingness to ride aggressively in the mountains, and although Wiggins and Chris Froome chased him down in the Alps, there’s no guarantee that they’ll be able to contain Nibali in the third week of the Tour. The Italian would also benefit from taking more time out of Cadel Evans before the final individual time trial, so he has incentive to continue riding aggressively even if the yellow jersey is on his wheel. 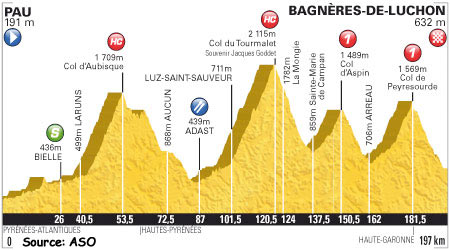 Wiggo & Co will be ready for a fight on tomorrow’s stage.

For his part, Cadel Evans seems almost resigned to the fact that he’s not going to win the Tour de France this year. His tone in recent interviews for a variety of publications is generally upbeat and optimistic, but Evans tells it like it is and he knows that he essentially needs Sky and/or Wiggins to falter in order to have a chance to overcome his current deficit to the yellow jersey. But in bike racing you can’t wait around and hope for an unforced error (to borrow a term from tennis, an unforced error is when you just mess up on your own, whereas a forced error is when your opponent hits a shot that is particularly difficult to return). You have to race aggressively to increase the chances of a forced error, and that’s what Evans will surely try to do.

If there’s anything that the Tour de France is missing this year, it’s a charismatic climbing specialist. Wiggins, Peter Sagan, and Tejay Van Garderen have all been very impressive in the ways they have captured and defended their respective jerseys. But this morning I had to look up the fact that Fredrik Kessiakoff is leading the mountains classification. It’s been this way for the past few years in the climbing competition. That’s not a knock on the riders who have won it, they’ve all been good riders, but not exactly stand-out climbers (with the possible exception of Sammy Sanchez). 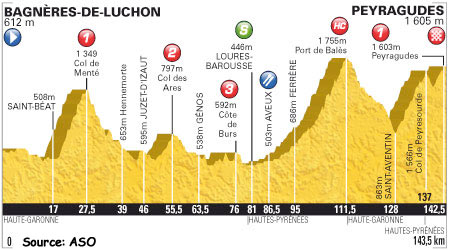 Thursday’s stage 17 will be sure to serve up any attacks left smouldering from the day before.

There are a lot of points on offer in the coming two stages, and the polka dot jersey competition is wide open. Kessiakoff only leads Pierre Rolland by 14 points. With two HC (25 points to the first rider over the summit) and two Cat 1 (20 points to the first rider over the summit) climbs in Stage 16, and another five categorized climbs in Stage 17 – including the HC Port de Bales and the double-points Cat 1 finish to Plateau de Peyragudes – the polka dot jersey could be the exciting competition to watch over the next two days. And if Team Sky continues to steamroll over the mountains at the head of the peloton, it might be the only jersey competition that’s really up for grabs over the next two days.