Tour de Pez: Carried Along By The Cheers

Roadside St.3: Do you still remember what it was like to be little? No worries about showing your emotions, like loving the unadulterated thrill of the biggest day you could possibly imagine? Have you ever felt that you just lost a little of your ability to feed off the excitement of a crowd’s electric buzz? There are a lot of kids in France who could reconnect you with that enthusiasm. 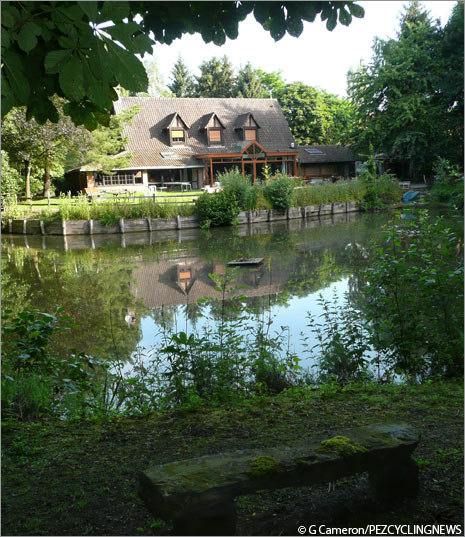 Last night’s hotel was pretty cute. A really rustic auberge with old stone water basins and rickety farm buildings. The owners make their own yoghurt and preserves with the produce from the farm they run – it made for a nice petit-dejeuner.

Once we got going, the little guys on the side of the road certainly had energy and enthusiasm in heaps. We drove through towns like Moncheaux, Sainghin-en-Weppes and Saint-Floris – the noise was deafening. The schools were out in force; whole student bodies jammed along the barriers, screaming their heads off only the way children can. 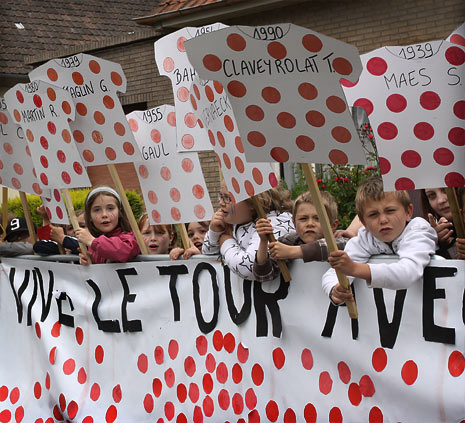 Given Michael Morkov’s heroics over the last few days it was fitting that this bunch had chosen to celebrate the climber’s competition, name-checking Lucho Herrera and the late Thierry Claveyrolat among others. If you’re a tired Tour rider, the noise surely helps you a bit, picks you up and lifts you a few more meters. 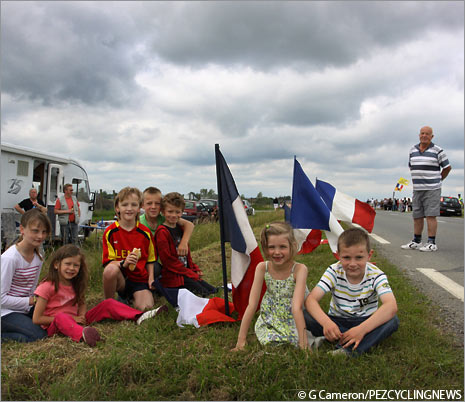 Along the road, gaggles of kids playing chicken with the cars (not clever); knots of kids in the buckets of tractors and land excavators, waving their colours. We’ve left Belgian soil behind, and the French tricolore (as well as the Flemish lion!) is back en vogue. 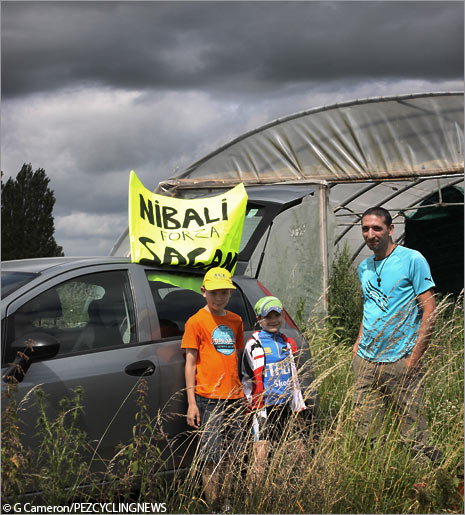 Early on, we spotted a couple of kids and their dad with a homemade sign that pointed out where their loyalties lay. We didn’t bet against them getting the stage winner right on a course finishing the way today’s would. 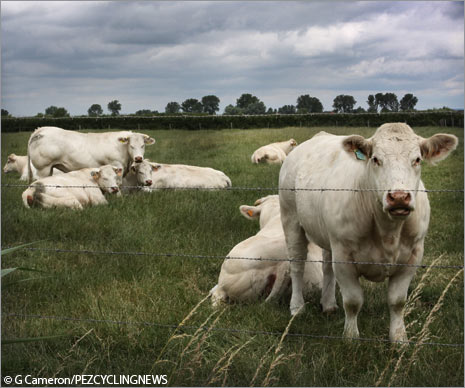 The harvesters were out in force tearing produce from the ground. Massive lorry loads of potatoes careering around in the fields we saw from the car. This is prime farming country; although there are all those hills to contend with as the Tour screeches towards the northern shore of France there are still wide open expanses. And cows. 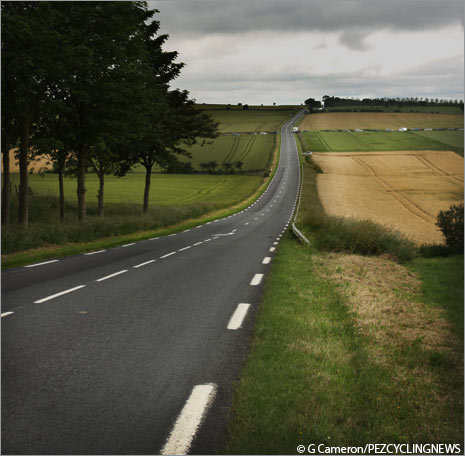 The route is not dissimilar to yesterday with the race due through tiny towns and narrow streets, twisting country lanes and then wind-swept main routes. It’s a recipe for high-speeds and probable chaos. As we drifted into the afternoon, bullet-straight roads stretched into the distance.

The drive over the day’s following climbs is frustrating; fans ambling across the road with no sense of self-preservation. You sound your horn; they don’t move, but turn round to see what’s going on. The Cote de Mont Violette was the worst today. Steep, narrow and no room for mistakes. Spectators not caring whether their feet get runover. 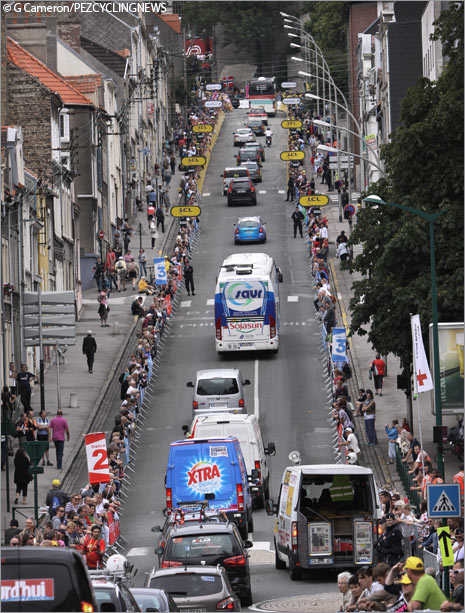 Into Boulogne-sur-Mer and we’re tantalisingly close to our destination, but the traffic backs up. In line with the new ASO directives, we dutifully switch off our engine and watch some of the staff enjoy a soccer kickabout until the bottleneck clears. 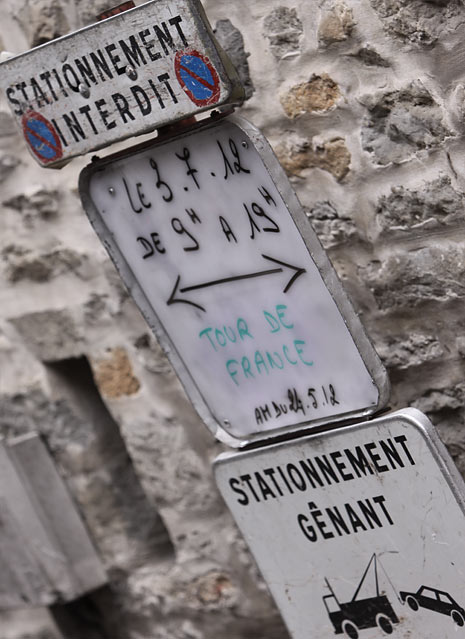 The hand-written notes on the boards were a lovely touch as we idled next to the Castle museum. 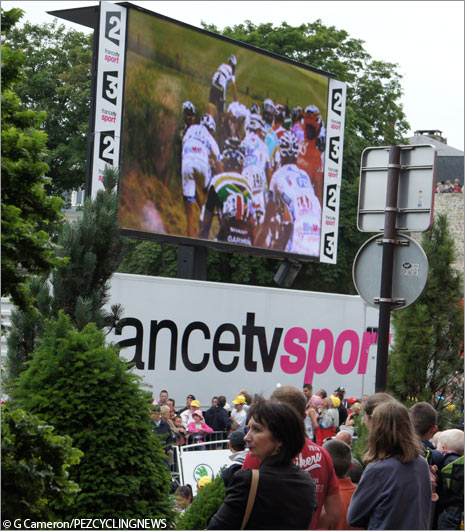 Just as we’d thought, the first thing we see on the big screen just below the finish line is a crash. Sky’s Sivtsov is down and out. 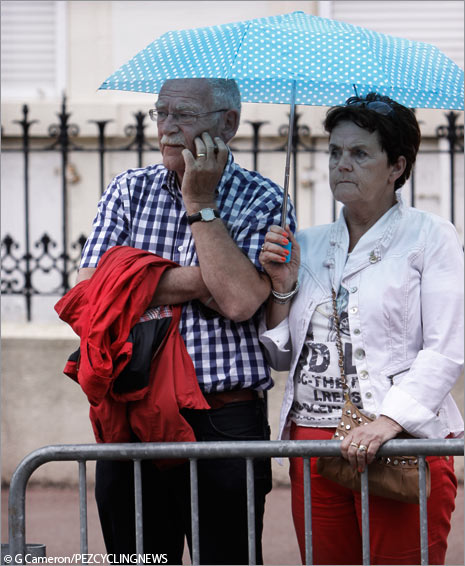 A wander up to the line and a tip of the hat to the NBC Sports staff – their truck has a large screen on public display. A very nervous couple watch in horror as crash after crash unfolds before their eyes. 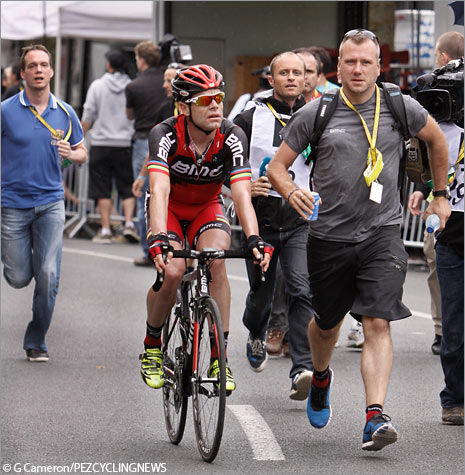 The result is never in doubt. Sagan cruises home. The first rider to emerge out of the melee for the ride to the bus is the defending champ. No problems for Cadel today, expertly guided by his BMC squad. 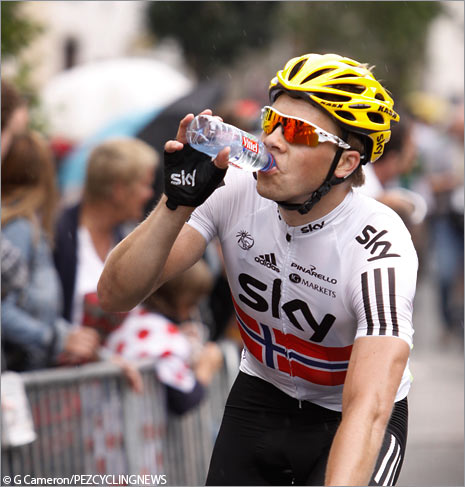 Eddy Boss is again frustrated by Sagan, coming up second. The Norwegian might have the consistency to hang on in the points competition if the end of the the Tour proves too much for the Slovak. 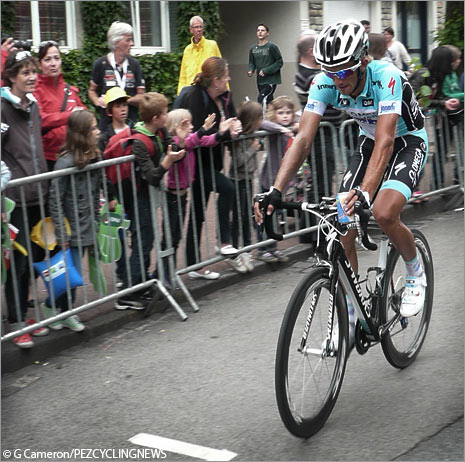 Another Slovak talent comes home third. OPQS’s Peter Velits has what it takes to ride a three-week Tour to the podium; a leader’s position here could see him do something big at the Tour. 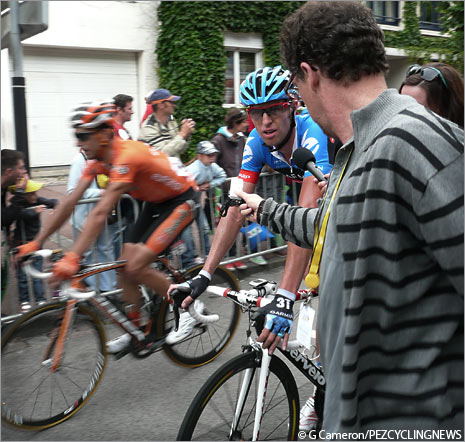 Canada’s Ryder Hesjedal is just outside today’s top ten, but he’s doing what he needs to. Staying in touch, staying out of trouble. 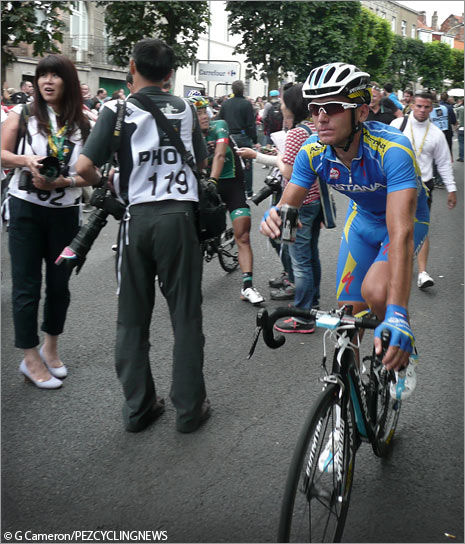 Russia’s Andriy Grivko was brave today, but there was just no way he could survive the Cote de Saint Lambert. It was too far, too exposed and too hard to hold of the field. Just a shake of the head as he passed me, a swig of Coca-Cola, and off to plan for another day. 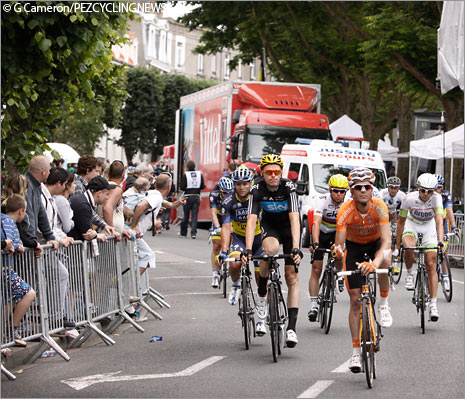 Seven-plus minutes gone for Cav today, but I don’t suppose he’ll be too bothered about that. It’s another day safely negotiated – tomorrow and Friday look a lot more like his territory. 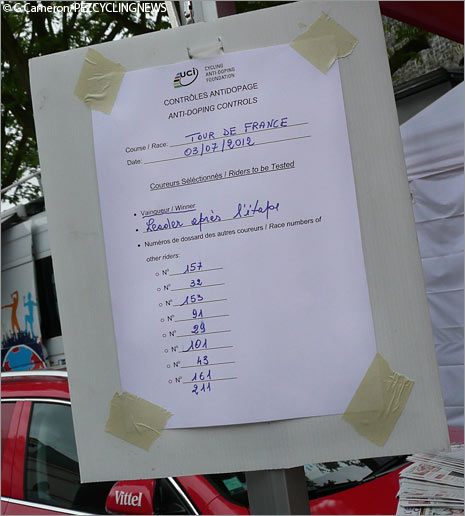 Everyday, the anti-doping control list is posted up, so everyone can see who’s been picked out of the raffle. There’s definitely targetting going on, judging by which numbers come up on stages that might suit those individuals. You can work out for yourselves from the list … 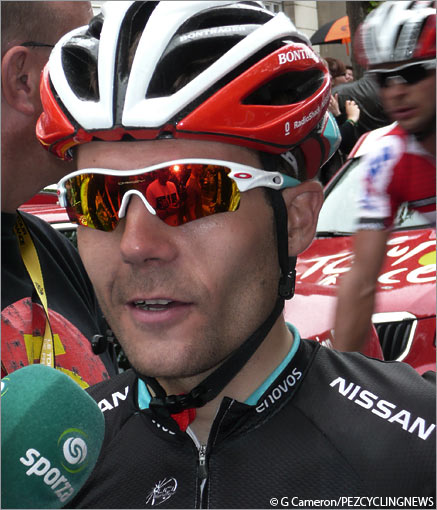 Job done for Maxime Monfort, a spectacularly under-rated rider. Helping keep Cancellara up front, he then shepherded Frank Schleck to the line and still had enough energy to give interviews as broken and bleeding riders trailed past. Dominik Nerz bandaged up; Yuriy Krivtsov missing a portion of his shorts. 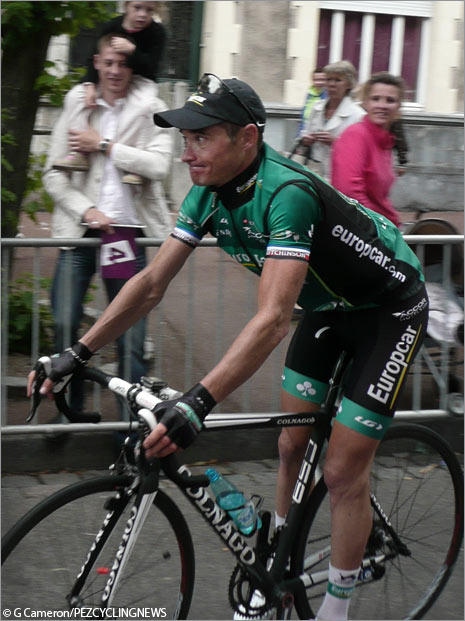 No heroics this year from Thomas Voeckler; the injuries pre-Tour might have been worse than feared and seven minutes lost today is irredeemable even for him. As the fans leant over the barriers to laud him, he just grimaced. 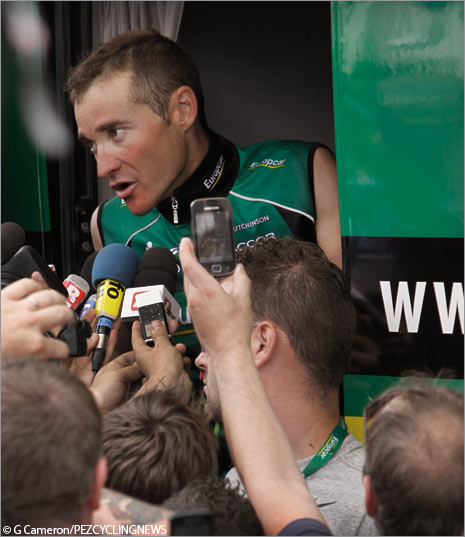 He looked happier once he’d got himself back to the bus, but even then there was an air of resignation. He needs to get back in touch with his inner child! 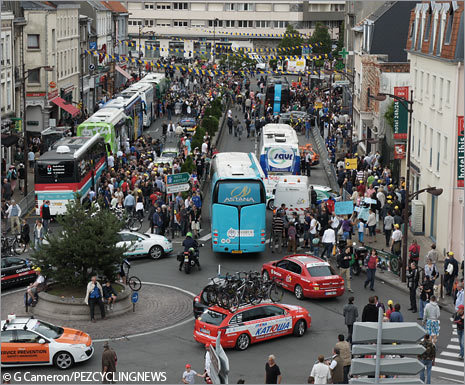 The best-laid plans turn to mush in an instant when the stage finishes; tired pedestrians, agitated security, urgent bus drivers. The view down from the battlements above the Boulevard Euvrin would be a waking nightmare for anyone who likes things orderly. 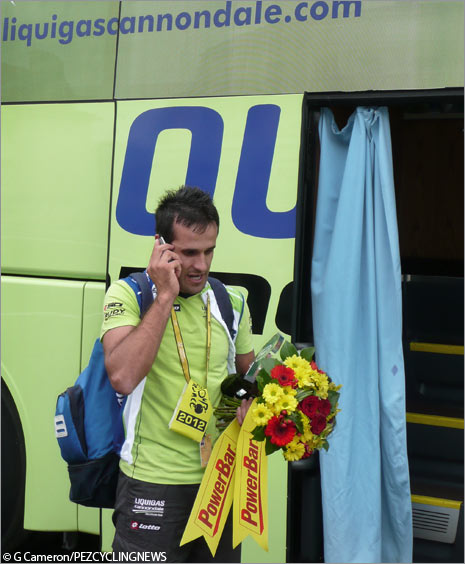 The juvenile roadside pundits have got a way to go before they match Nostradamus, as Sagan was a universal shoe-in for today’s stage. The winner’s trophies were back at the Liquigas bus long before the man himself. It’s been a while since someone came along who could outscore Cavendish for stage wins, so Sagan will have a lot of press responsibilities to handle. That might make the difference between winning green this year, or having to wait. 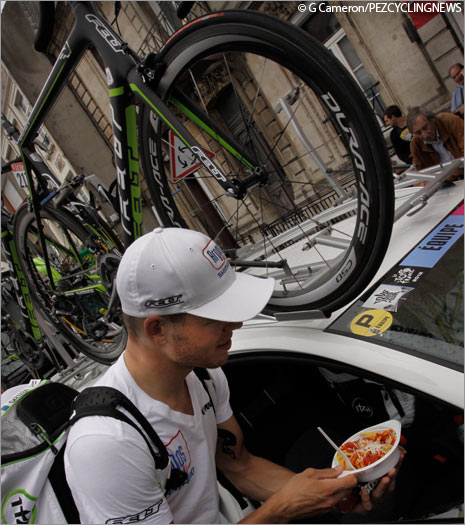 The first week on Tour is always stressful, and each stage ticked off is a battle survived. There’s no time to waste in getting away from the finish. By the time I reached the Lampre bus moments after the last riders crossed the line, the carpark was awash with soapy, scummy water – shower time onboard.

No time waste in refuelling either. Argos-Shimano’s Tom Veelers took up residence in the team car along with his pre-dinner pasta. That reminds me …