Roadside: The BMC Racing Team’s press conference is due off at 3.30pm. We get to the Park Inn Hotel, tucked between the ring road and the airport at 2.15pm. It’s already rammed to the rafters. We take the roundabout a couple of times to shake off a truck before trying a risky parking manoeuvre. If Cadel’s got any pearls of wisdom, we don’t want to miss them. 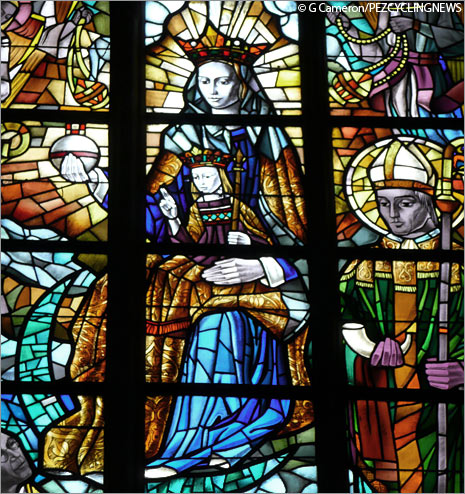 But, before that … there’s no point going to a new town, a new country, if you don’t at least have a look around. Liиge has a beautiful cathedral which is well worth a few moments of your time. Stunning stained glass windows cast a radiance onto the pews. 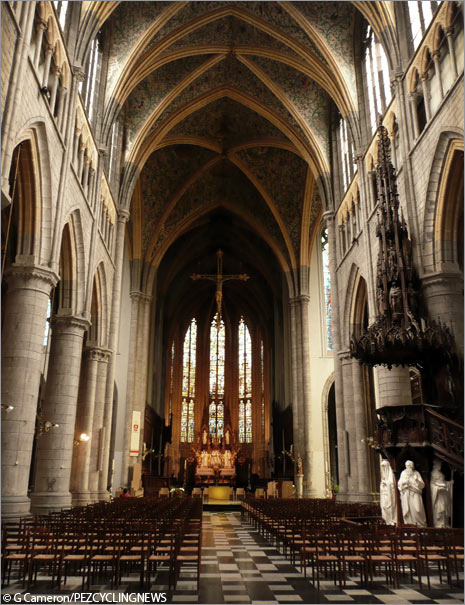 A gorgeous courtyard garden sits hidden from general view, but you can peep out at it from the cloisters. Inside, parties of schoolchildren do actually look up at the ceiling details in awe, when their teachers pointed them out. 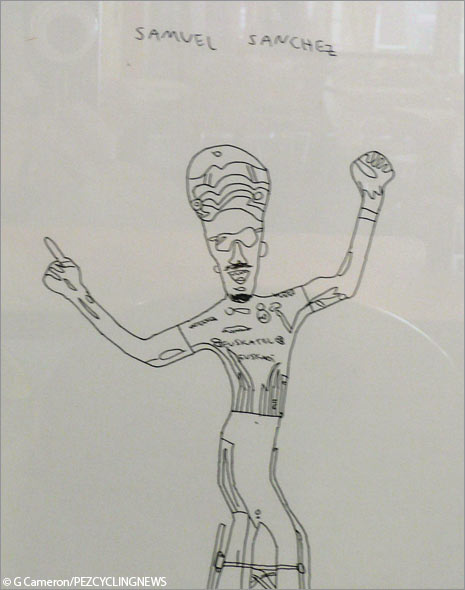 The rain starts to spit, begins to pour., as we head out. We duck under cover in a neat little cafи, the walls lined with cutely, crudely effective representations of cycling’s stars. Not sure what Cav or Cancellara would have made of themselves, but Sammy Sanchez looked pretty cool. 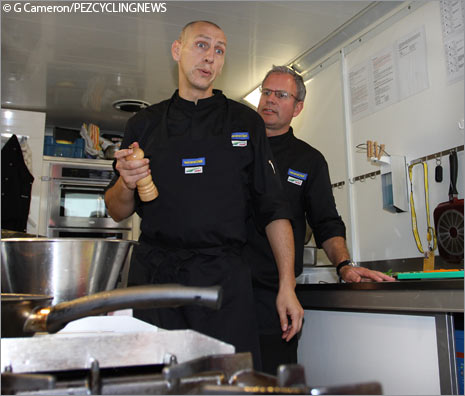 Orica-GreenEdge and Vacansoleil-DCM are in the same venue as BMC for a few days. The Dutch team’s chefs have just finished dishing out lunch and are cleaning up their hyper-neat mobile set-up. The kitchen boss Dirk van Schalen has been with the team since it began, and he knows the routine well.

“We cook three kilograms of pasta each day. One kilo for lunch, one for the bus after the stage, one for dinner. It doesn’t all go the stomach, eh? The riders sometimes leave a little on the plate!” 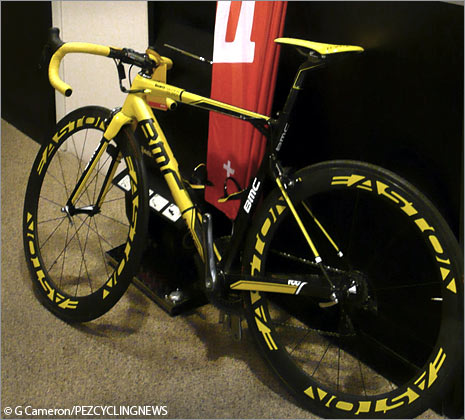 Inside, propped nonchalantly and obviously against the wall is a rather lovely yellow-trimmed machine. Wonder who that belongs to? Anyone who’d steal it would have a hard time selling it on! 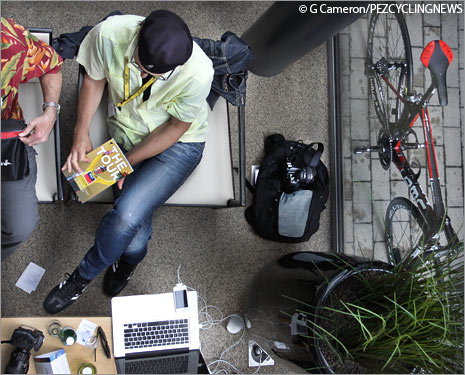 It’s as much a Salle de Reunion as a press conference, multilingual greetings passing back and forth, backs being patted. We took the chance to snap a quick pic of photographer and author James Startt perusing a copy of Aussie journalist and writer Rupert Guinness’s new book The Tour.

But there’s a bit of nervousness there, too. Everyone’s desperate to get into the Charles Lindbergh suite and as soon as the doors open, it’s like the rush to the front of the stage at a music festival. There are more tripod legs than human legs, or at least that’s what my shins told me. 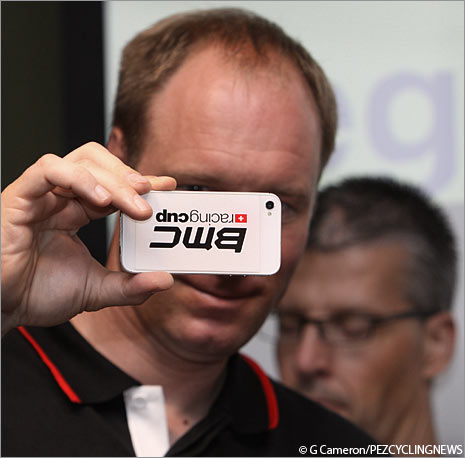 It’s the corporate stuff to deal with first. We hear: “What you see here is our new team machine, the new SLR01 … this is the model ’13 bike. The only rider to use it during the Tour is Cadel. We have optimised this bike in terms of weight … so with the weight reduction we have achieved here, Cadel can play more with comfortable equipment that will give him an advantage, saving energy.”

Andy Rihs takes over, warming to the theme of Cadel the champ: “At the end of his time trial (in 2011), I guarantee you that on his bicycle he was a meter off the ground. It was the toughest time ever in my life! I said: ‘Don’t race as fast, you got it already!’ But you couldn’t stop him. So, thank you very much once again. Great party!” (Laughter rings out around the room.) 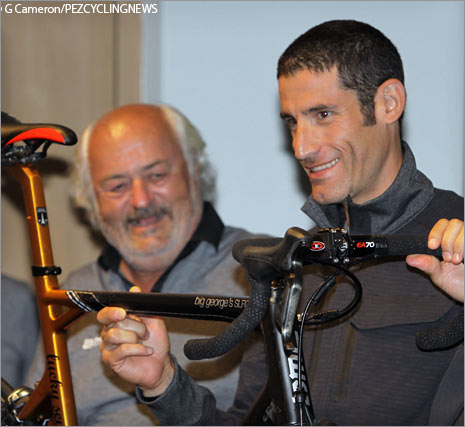 Rihs turned his attention to Big George Hincapie. “Oh-oh”, could be clearly heard from the veteran American. He didn’t need to worry. It was a commemoration of 17 Tour starts, and a birthday present. A personalised BMC SLR01, with ‘Lucky Seventeen’ lettered down the tubes. Neat. Big George looked genuinely touched: “It’s perfect.” Rihs modestly adds: “It’s a beauty!” But then it is his baby at the end of the day. 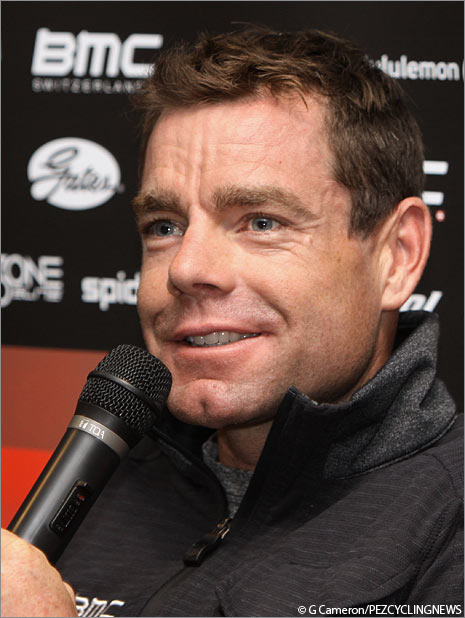 George has always been a laid-back guy in front of the press, and his capo Cadel handles the media very well these days. Since winning the 2009 Worlds, he seems a changed man. How will he strategise this year? The answer is a breeze.

“It’s pretty simple. You’ve got to get to Paris quicker than everyone else … the basics are the same.” What continues to drive Evans? “Winning one Tour is great. Winning two Tours must be better, right?” 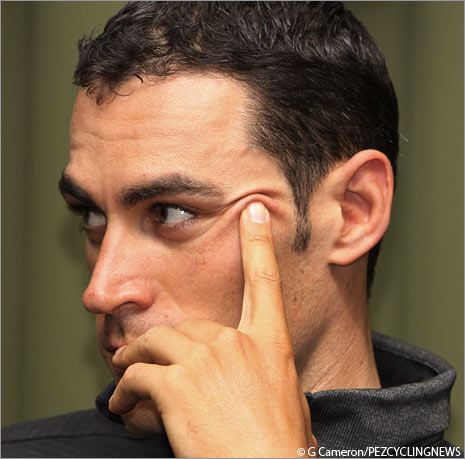 His team-mates are scattered around the room, which is getting hotter with all the people, lights and cameras crammed in. Burghardt is smiling. Tejay Van Garderen looks a little distant. Manuel Quinziato is rocking a mean-and-moody ‘next James Bond’ look. 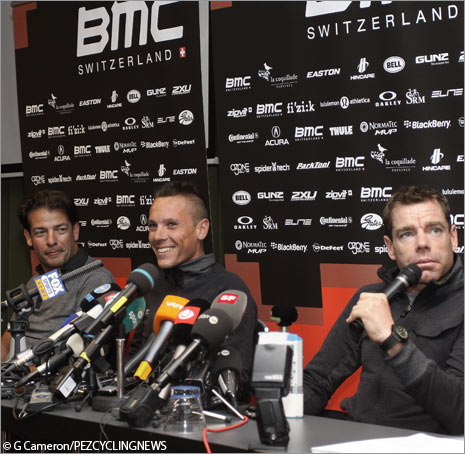 Philippe Gilbert just missed out on a Tour start the last time the big show rolled into Liиge, but he gets the chance to race in front of his own city. Even more than that, he gets a bigger chance to win on the steep finishing climb to Seraing on Sunday.

He’s a multi-talented guy, is Phil. He even takes time out of the press conference to fix up a remote flash for one of the photographers, as Evans holds court. 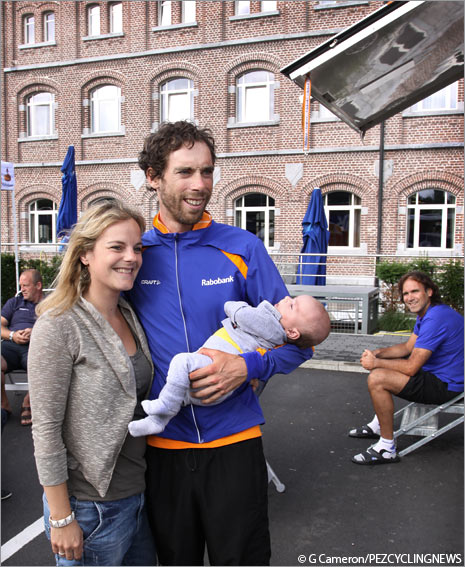 It’s time to hit the road again. Friday afternoon. Rush hour. It’s 28kms to Verviers. The Sat-Nav says 20 minutes. It’s optimistic. The roadworks make it an hour. Team Sky are holed up in the very nice Van der Valk Hotel. Rabobank are there, too. Laurens Ten Dam has his family around to wave him off, and he looked mighty proud of them.

Like BMC’s press conference, this one is packed-out. There are tables set up for later, with the three bosses (Wiggo, Cav, Eddy BH) given their own name cards. Wiggo’s, replete with Mod lettering, is the coolest.

The man himself rolls into the press conference, looking more like a Seventies throwback than ever with the finest sideburns in the peloton. The best Wiggo soundbite of the day is the slightly bristly response to an innocent sounding question from an Aussie journo. 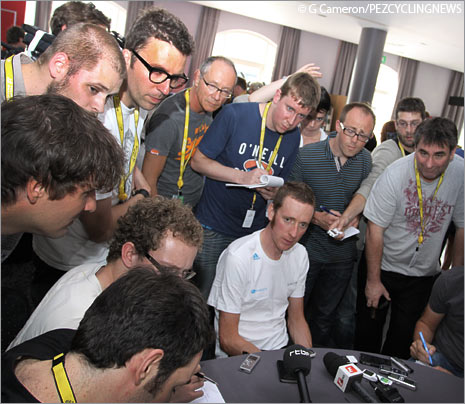 The query could be read two ways … ‘how do you maintain winning form for so long’? Wiggo appeared to take it personally, and took pains to be clear about his training: “’Ard work. Bloody ‘ard work! And a bloody good coaching team behind me.” 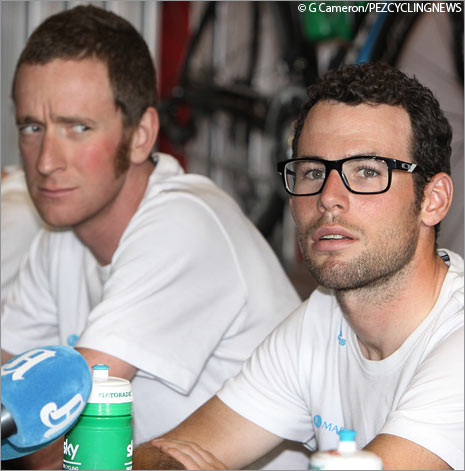 The rest of the questions are standard pre-Tour fare. The riders set off for their special tables. Cav looks a bit shy, tries not to make eye contact until necessary. At one point, he forgets. Looks round. A million flash bulbs go simultaneously! 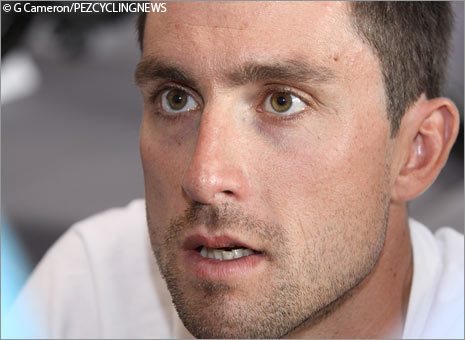 The lantern-jawed Austrian Bernie Eisel is in great form, as usual. Will it be weird racing against Matt Goss and Mark Renshaw, both so integral to the old Columbia sprint train?

“Nah, not really. I don’t really go through the names of who’s here. I just concentrate on my job. First of all, I go down the ramp tomorrow, and then I go day-by-day. I think the other guys who have sprint ambitions have to ride a bit, because the first finish isn’t maybe so good for Cav.” 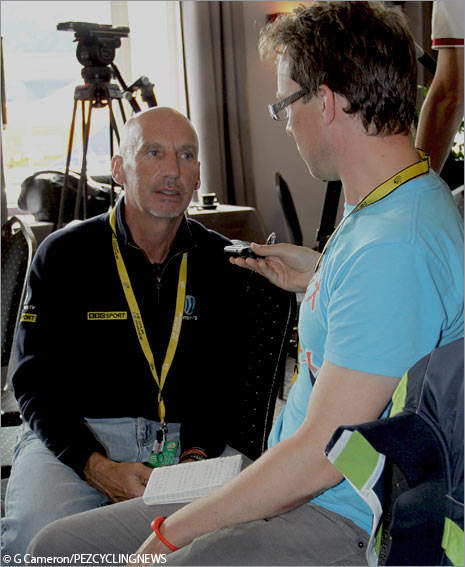 When it comes to British talent, Graham Jones knows about it. Before Wiggins, before Cav, before Robert Millar, Jones was ‘it’. The Brit that was going to the big time. Injuries and over-racing wasted the supreme talent he had, but he’s still excited about a Brit with a winning chance.

“The whole professional cycling scene has changed. From when I was riding, well, it feels like a million years ago. We (the Brits) all ended up going to different teams. Now we’ve got this organisation … Never have we gone into the Tour with a British favorite to win so it’s gonna be very exciting.” 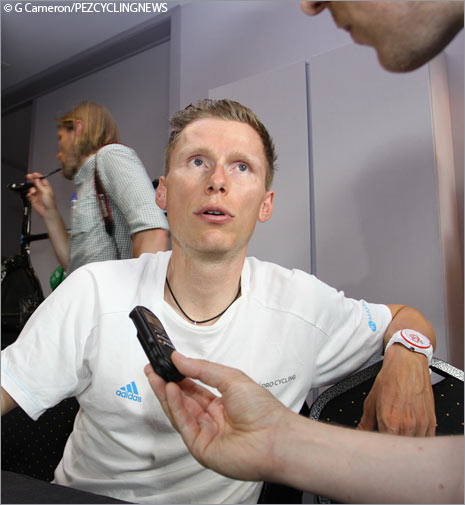 George Hincapie might be starting his seventeenth Tour. Christian Knees is starting his seventh in a row. The lanky German is a strong man, with a big three weeks ahead of him. “For me, it’s a pretty big honor to go into the tour with Team Sky. It’s such a good group of riders. I’m a rider who recovers from day-to-day pretty well. This will be one of the best preparations I’ve had for a Tour, and I’m going into it with one of the best forms I’ve ever had.” 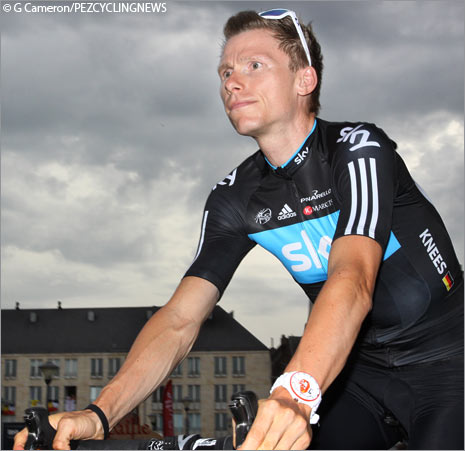 “Being selected was the first big win for me; now I’m here, I’m here to deliver good work for Bradley and Cav.” 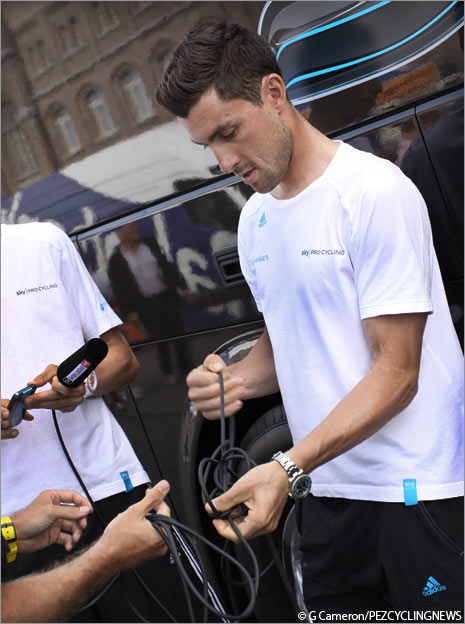 Outside Christian and Bernie are grabbed by German TV. Like Gilbert with the flash, they set to untangling a microphone cable while the interviewer looks on. All in a day’s work, when you’re used to drilling it for a champion. 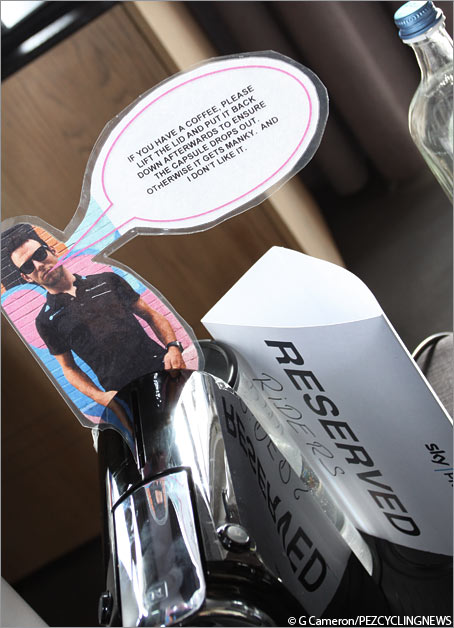 It’s about more than work. Champions need to lead, and neither Evans, Wiggins or Cavendish seem to do that by fear. Everyone is drilled. Everyone knows their jobs. And everyone knows that just sometimes you can’t be 100% serious. Every time I drink a coffee from now on, I’ll remember that!

A Name To Remember: Joe Dombrowski