Roadside St.6: We’d been keeping a close eye on the weather forecast the last few days before deciding on our strategy for today. They’d promised (or threatened) a lot of rain and it had come in bursts. If the weather’s rubbish, we’ll have an indoor day, feet up, watching the race coverage on France 2. If it’s not a monsoon, we’ll hit the road again.

It was tipping down outside our hotel last night. The sat-nav thought we were in outer space as we voyaged there; just a red arrow pointing forward on the display, and nothing else on show. Nothing! 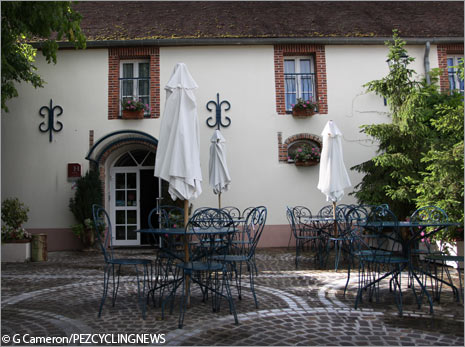 When we pulled out of our hotel drive this morning I could see two ‘you are leaving Montgivroux’ signs in both directions, spaced about 60 yards apart. It’s definitely the tiniest place we’ve been to. But the hotel was big, and hosts conferences and weddings so the WiFi was good and the organisation was top-notch.

The stage started a little to the north in Epernay before rolling gently east to finish in Metz. We took the D951 up to Champaubert and turned north-east. An old man was busy with his trowel and mortar fixing the pointing on an ancient maison at the cross-roads, a house that saw one of the last great evenings of Napoleon’s military career. He dined there with a Russian general he’d smashed in the Battle of Champaubert in February 1814. 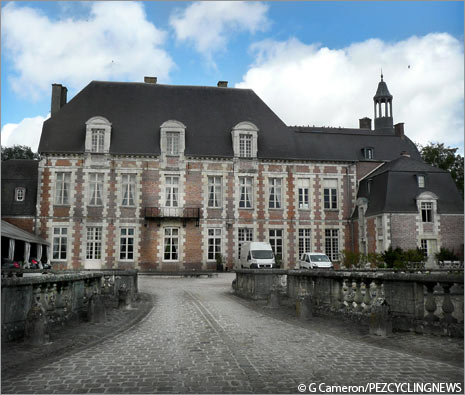 The clouds rolled through and off like a breakaway. We cruised to Йtoges, dropping into town with another stunning building looming into view. The Chateau d’Йtoges is now a hotel; Pez will be pleased to know we didn’t stay here! It was gorgeous, surrounded by landscaped grounds and a mini moat, but probably wouldn’t have been good for expenses.

On down the road, an old lady dutifully swept the steps of her apartment, stopping to chat to one of her contemporaries. They were the only people we saw moving. The cockerels belted out their morning song a few hours too late. 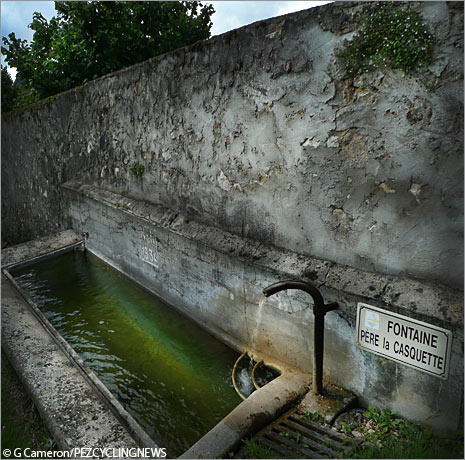 All through the town, fountains trickled at regular intervals, including one named after the Duke of Marlborough. 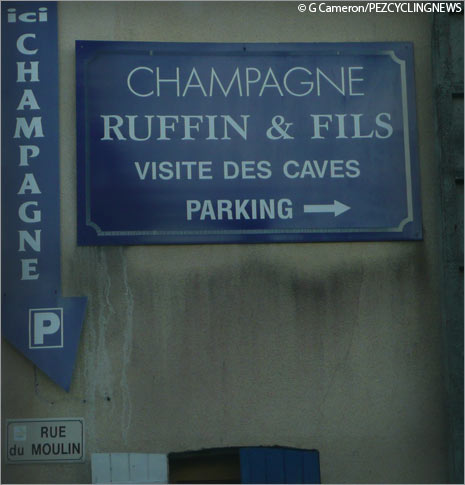 This whole region is champagne country. Now, I’m not the biggest fan and Valerie wasn’t feeling great today, so a viewing rather than tasting tour was called for. We picked the Ruffin et Fils family’s enterprise to drop in on. Soraya, the guide, took us down into the cave. The family has been here since 1946, but the site is much older. 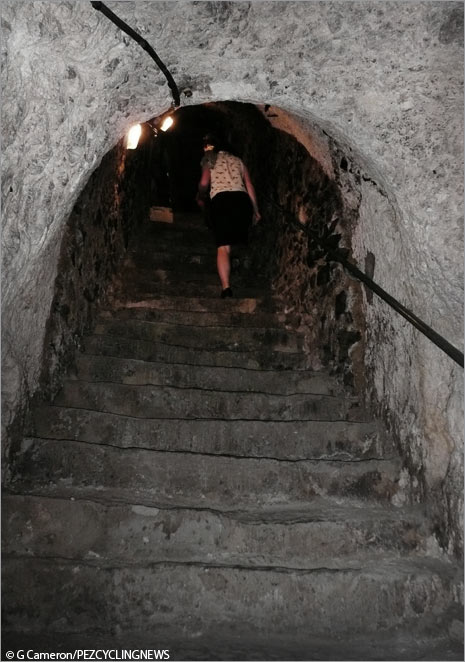 The steps were vertiginous, and you could feel the temperature drop with every step. Down into a 200-year old cellar. A sweet, slightly sickly, waft of alcoholic fizz. Dim lights. A little moisture dripping on the chalk walls, a substance that helps to keep the bottles at a constant 12° Celsius, except in winter when it drops a touch more. 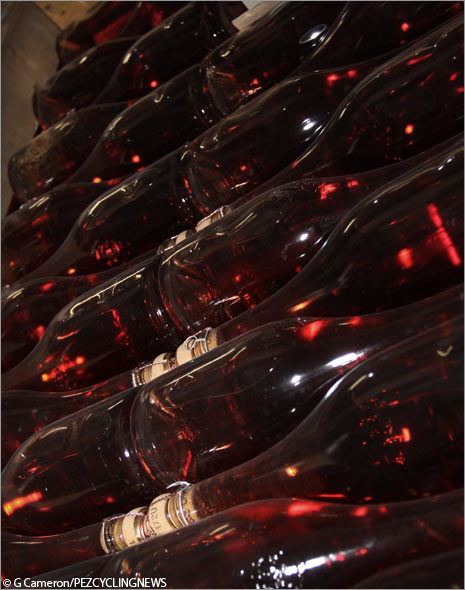 The company buys up 14 hectares of grapes each season. Everything is picked by hand, no machines. The produce is pressed immediately and taken for filtering.

After six-to-eight months you have the first alcoholic fermentation, and that’s when you add in the sugar and yeast. That helps to produce the first non-bubbly white wine. The bottles are then taken to the cellar to age. 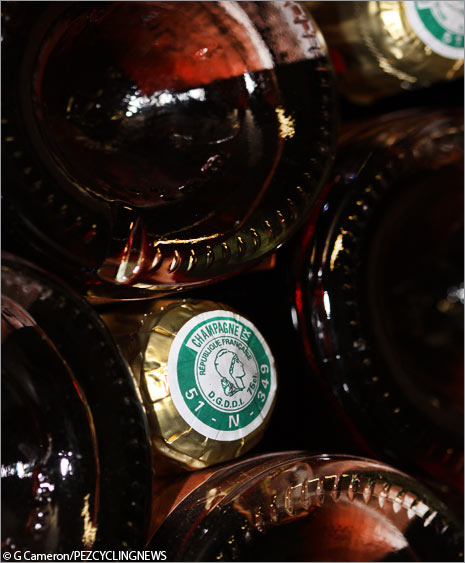 All the bottles have caps at this stage. It’s because the sediment builds up as the second fermentation kicks in. That’s when the bubbles appear. After one year, you have a non-vintage bubbly, but it takes three years of aging before you can apply the vintage label. 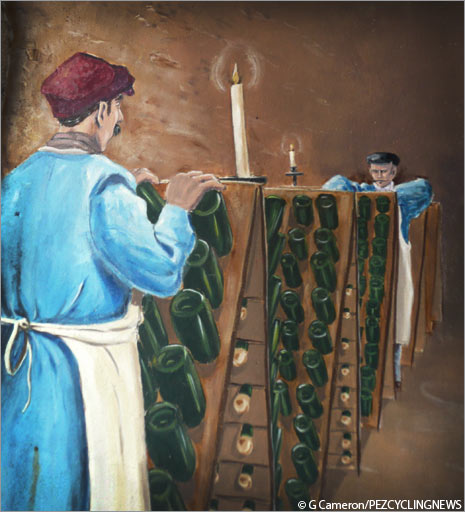 The bottles are then loaded into massive cages and gently rotated by machine to drive the sediment to the neck of the bottle. They call this remuage, which was a tedious, laborious but critical task. The painting depicts men engaged in this practice, just gradually turning the bottles a fraction every day. 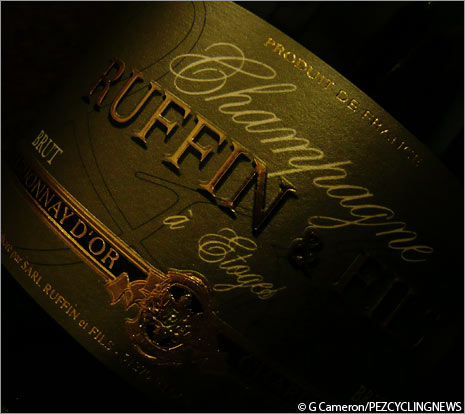 The necks of the bottles are then frozen to capture the sediment; the caps and the sediment are removed and more sugar and wine are added to replace that lost in the extraction before the cork goes in. The amount of sugar defines the quality of the champagne: ten grams added gives you a Brut and twenty grams gives you a demi-sec. Less added gives you sparkling wine. Ruffin et Fils produce 250,000 bottles a year, sold globally. 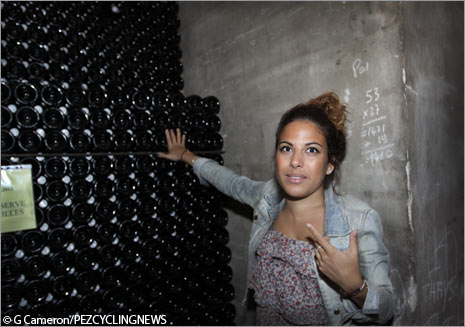 If I hadn’t been driving I’d have been more than happy to give it a taste. Every champagne house has a unique taste, due to the provenance of the grapes (the soil conditions, for instance) and the exact recipes employed in the production. I asked Soraya if she was going to be a sommelier when her training was over, but, no. It’s an unbelievably specialised field. 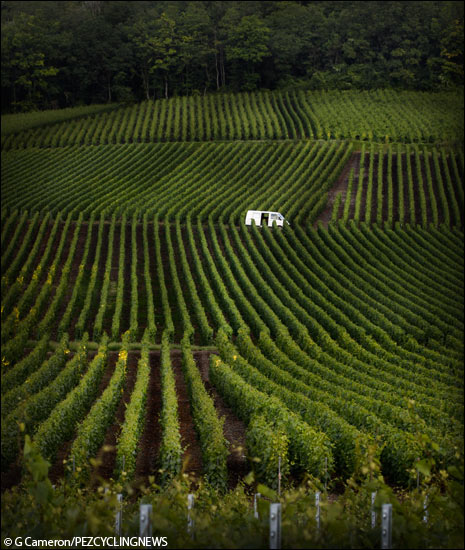 Race time is calling so we say our farewells to Soraya and her champagne, and pass through Bergeres les Vertus. Vineyards dominate the hillside as the D933 passes beneath our wheels. 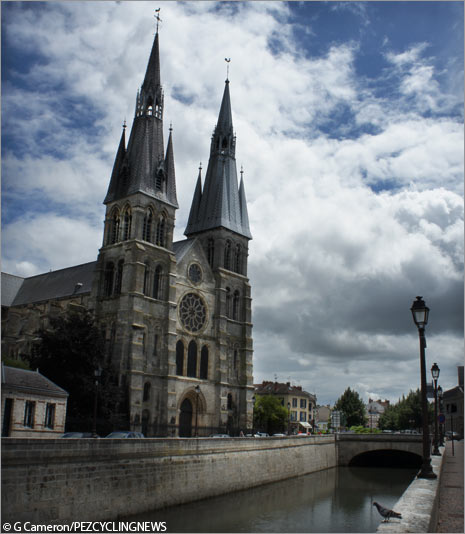 The plan today is to see the race as it passes through Chвlons-en-Champagne. The beautiful Cathйdrale Saint-Йtienne de Chвlons sits by the river as we park up to go and find the race. The caravan has been and gone. 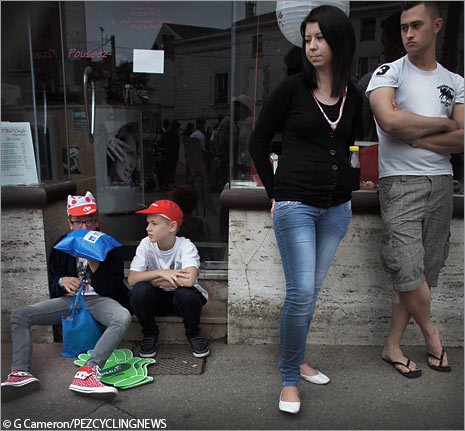 The kids have had a momentary dip in enthusiasm as the wait for the peloton goes on. It’s running slightly behind schedule. The sun comes and goes and the freebies are losing their appeal. 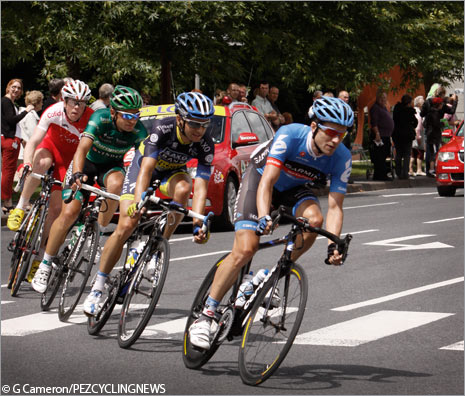 Sporadically, press cars, team vehicles and the motorcycle outriders come through, then suddenly the break! I’d been daydreaming, hadn’t noticed the start of course vehicles. I hear Zabriskie’s name. Four together as they zip past mutually slipstreaming like a track pursuit squad. 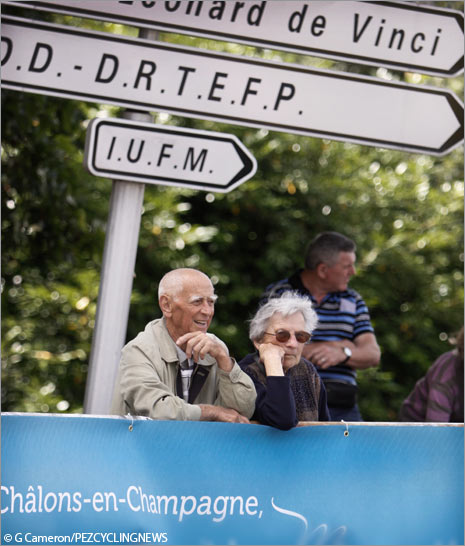 I’m slightly surprised that the barriers aren’t totally rammed. It’s Friday lunchtime, the day’s decent, but business goes on in the Palais de Justice. This is the regional capital, so I guess someone has to sort out the bad guys. 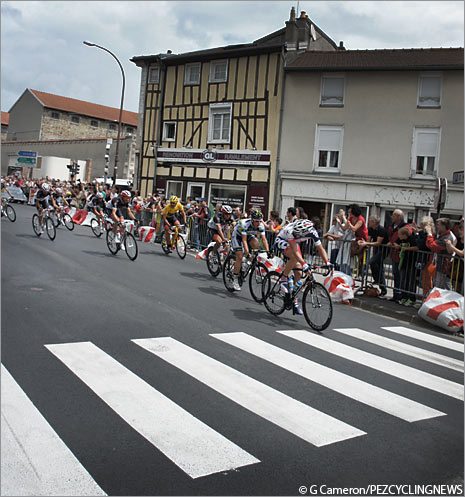 The head of the peloton looms into view a few moments later. Lotto-Belisol and Orica-GreenEdge are pulling it along. 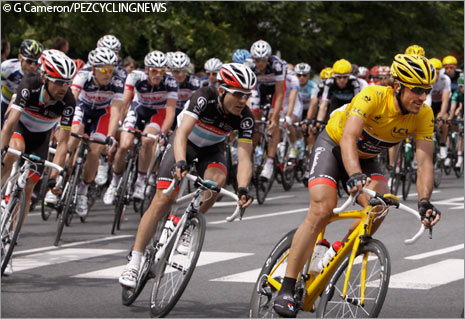 The maillot jaune is safely to the front, out of trouble. BMC racing are protecting Evans. 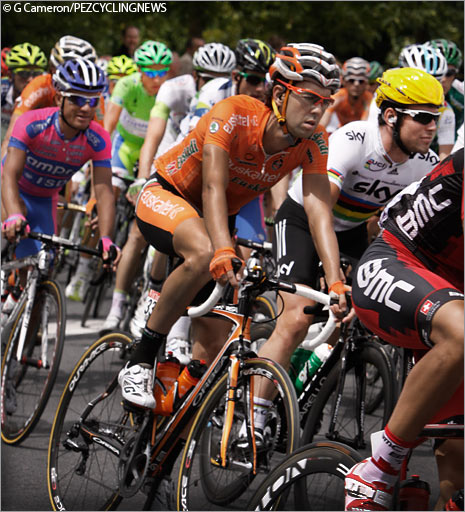 The maillot vert is pretty well hidden down the field as the intermediate sprint is a way off yet. 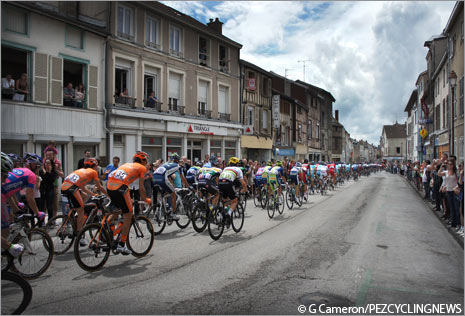 It’s a sea of color, a beautiful sight. 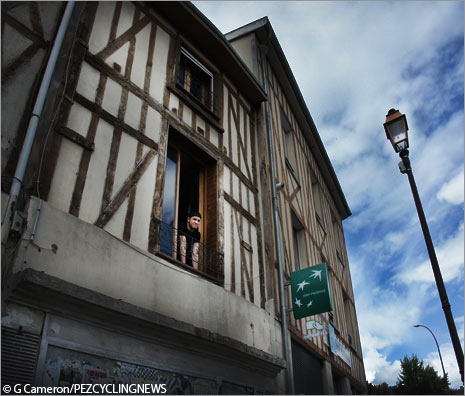 Overhead, in some of the old town’s buildings, spectators have a fantastic view of the spectacle as the race tears down Rue Lйon Bourgeois, named for a former deputy of the Marne region who went on to head the Council of the League of Nations and win a Nobel Peace Prize. 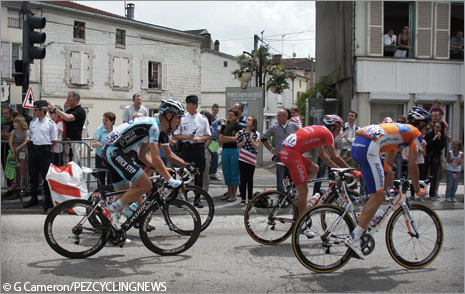 The field strings out as it corners, and then contracts as the speed decreases a little on the straights. Apart from the four escapees, it’s all together, except for … 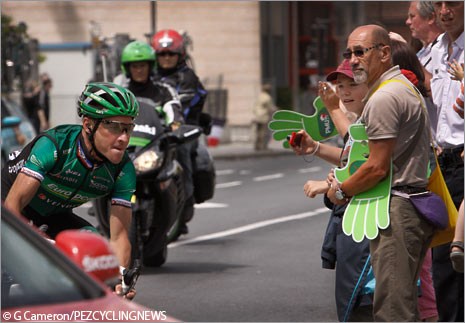 … Voeckler. Tommy V is grimacing off the back of the field, darting in and out of the cars. The cheers are phenomenal. Is it for show, or is it for real? Tyler Farrar’s pain is obvious as he comes through, ploughing a lonely furrow, eyes staring forward, head tilted. 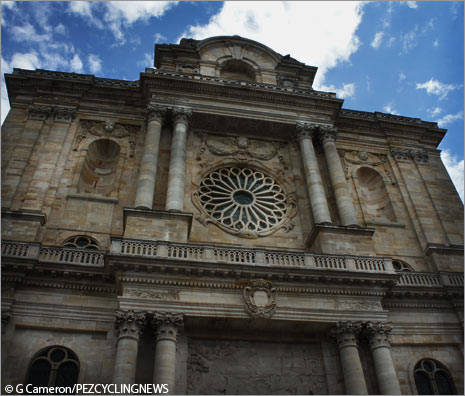 The back of Notre-Dame-en-Vaux church is stunning. Intricate carvings and balconies, spoiled only by the loutish behaviour of some ‘hilarious’ construction workers outside the nearby offices. Time to go. 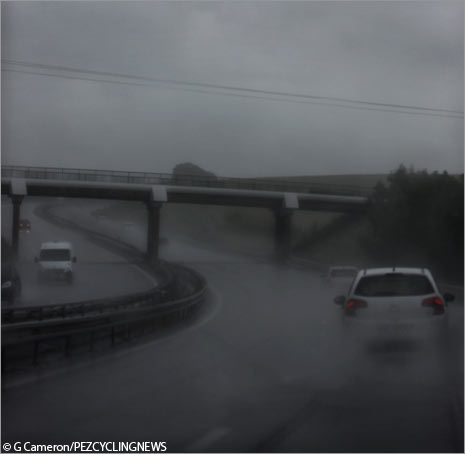 We’re back on the motorway, and the forecasters have got it at least temporarily right. The rain clatters down as we make for Metz and the stage finale. The race goes uphill tomorrow, and we’ll be there. Thanks for reading.