Roadside St. 12: Martin parks the Renault, we have to hear this, properly. Our French isn’t the best but we get the jist – Martinez goes away from the other four, they get him back, Peraud tries, all of a sudden it’s down to two – Millar and Peraud, but the others get back to them, last kilometre – one name is getting mentioned more and more as the commentator’s voice goes to ‘auctioneer’ mode… 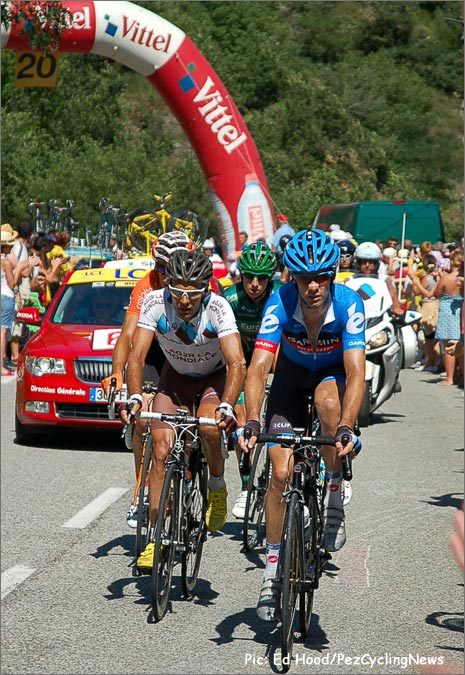 Two Scotsmen sitting in their hire car in a lay-by outside an old cemetery in rural France roar with joy. What a ride – and on such a day . . .

‘Be thankful for what you’ve got’ purrs William Devaughn from the speakers as we leave kilometre zero behind us on the flat, valley road. 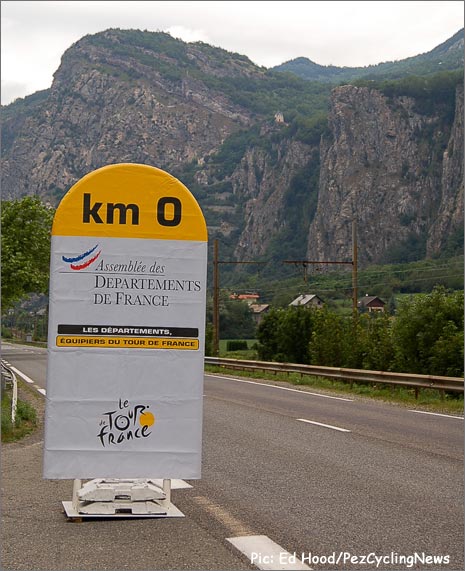 The sun is out, the limestone crags tower above us and there’s the beautiful prospect of driving the entire route of stage 12 of the 2012 Tour de France. The Col du Grand Cucheron is the first obstacle of the day; this stage could go either way, breaks will go on this climb and the next but after that it’s predominantly downhill but with a couple of ‘kicks’ at the end.

The break may stick or the Adam Hansens of this world might just mean it’s a shoot out for the fast men who can get over the bumps. 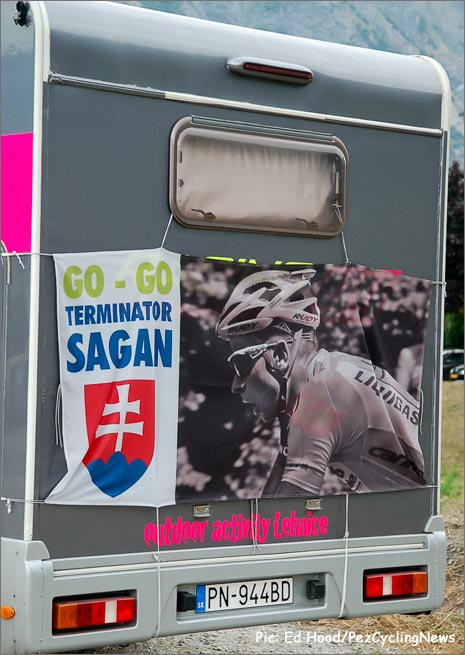 If it’s the latter, it has Sagan written all over it. The Aussie fans are philosophical about Cadel’s ‘jour sans’ – ‘that’s bike racing!’ 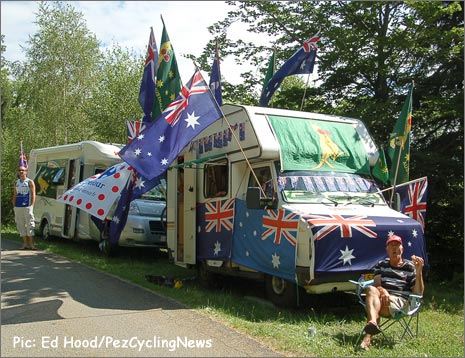 The col’s not a killer and the descent’s not too technical – plenty of opportunity to make time for the big guys. 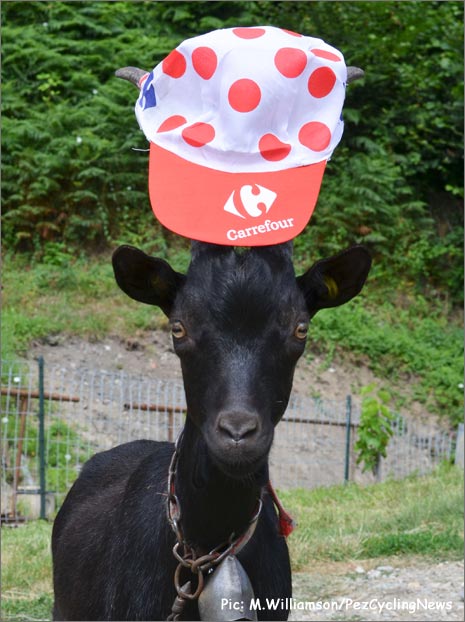 The valley road – dropping through the trees, we hear that a big break has gone and Sky are happy to let nature take it’s course – no one dangerous is up there.

But at the other end of affairs, we also hear that Cavendish, Van Hummel, Farrar and Hutarovich have been dropped – ‘bon chance’ to them with two mountains and a long slog across the plains.

The Col du Granier rears out of a flat plain, long straights, a heart breaker. It steepens as we get nearer the top – ouch! 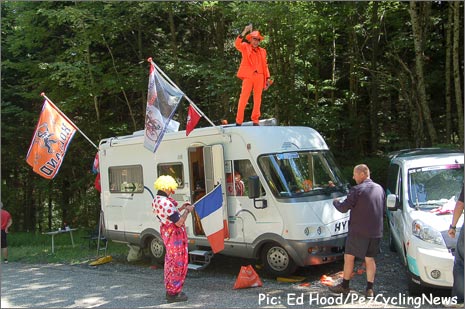 The mad Dutchman in his orange suit is up here, drinking champers and singing – not a bad gig.

The top is the top, none of that false flat stuff – straight into the descent, it’s not too nasty, open, with long straights and the shadows aren’t playing tricks.

Chow time, pre-packed croissants, but with a bit of ham and brie, they work just fine. 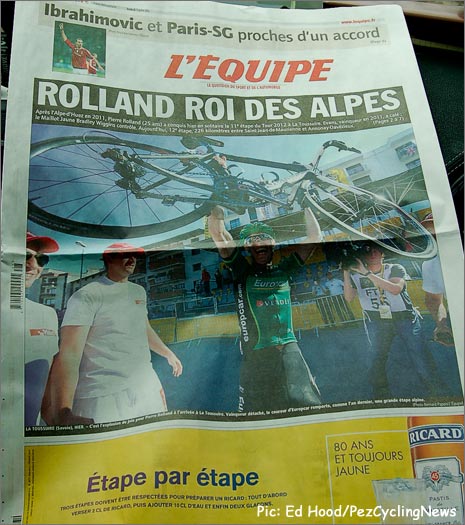 It’s been hard to find l’Equipe when the French guys are doing so well, but we find one; ‘Rolland Roi Des Alpes’ – Rolland King of the Alps. Inside there’s a breakdown of the Sky riders work rates, in terms of kilometres on the front, yesterday: 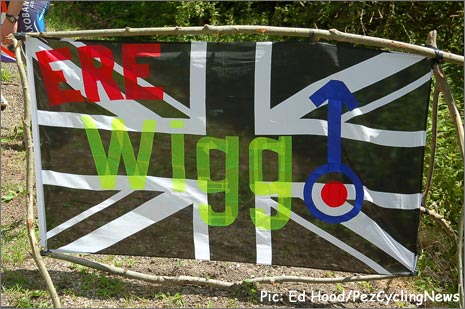 If Brad does win, he owes a big debt to the men in blue and black.

And l’Equipe reminds us it’s 45 years to the day since Tom Simpson died on Mont Ventoux. 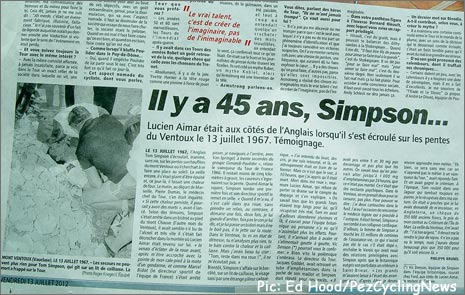 With no marginal gains or billion euro budgets he won three monuments and the world championship, but lost his life pursuing his impossible dream of winning le Tour. Rest in peace, Mister Tom.

The feed, the guys from GreenEDGE are busy with bottles – we don’t bug them too much. 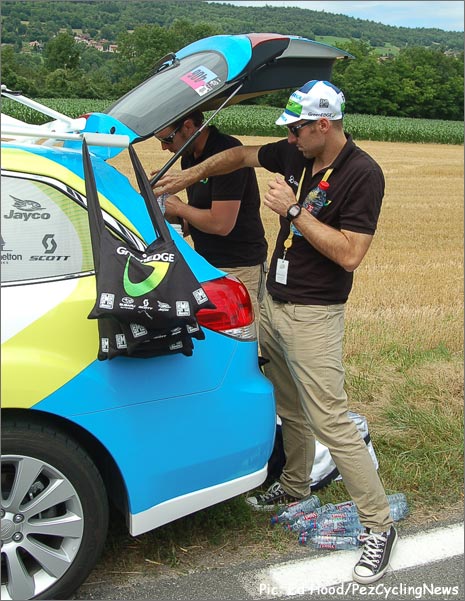 The parcours changes, the horizon is further away with Sir Isaac Newton’s law mostly lending a helping hand. Maize fields, wheat, sunflowers and the mountains are behind us – but not the wind, the coureurs are heading straight into a stiff breeze. 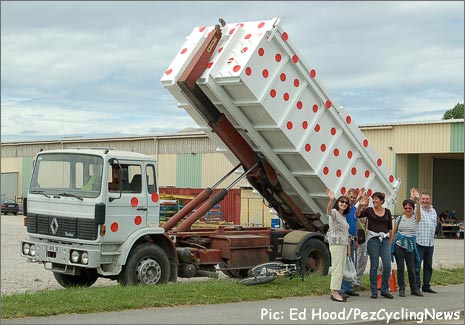 And even the waste trucks have ‘poids’ in these parts. The cuties on the Tour souvenirs van are working hard for the money – but never forget to smile. 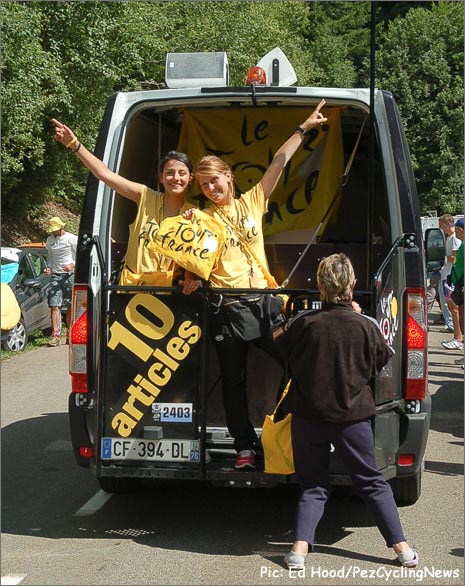 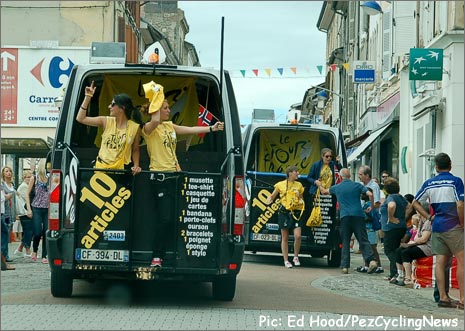 The Lotto Belisol twitter stream tells us that with 100 K to go the break of five has seven minutes – Kizerlovski, Gautier, Peraud, Martinez and David Millar.

All five are strong rouleurs; it would be magnificent if Millar could pull it off on the anniversary of Tom Simpson’s death.

I get a text from Scotland that the gap is yawning out to nine minutes – they could make it. But word is that Greipel, Cav and Chava are battling their way back – it could be a cliff hanger finish. Outside the Renault, the sun is splitting the skies, the wind will be on their left shoulder and they’ll need a lot of bidons, today. 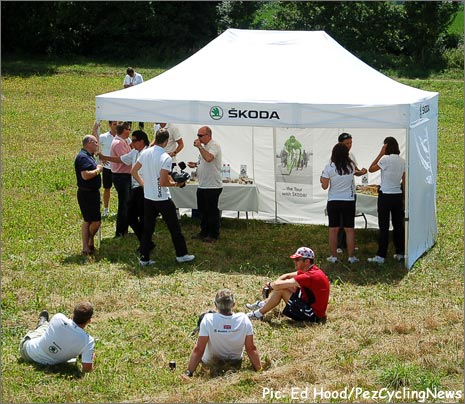 The Skoda ViP’s relax under their canopy – that must be nice.

The road is with the breakaway riders, dropping gently; 11:30 is the gap now – that’s not coming back with only 80 K to go. 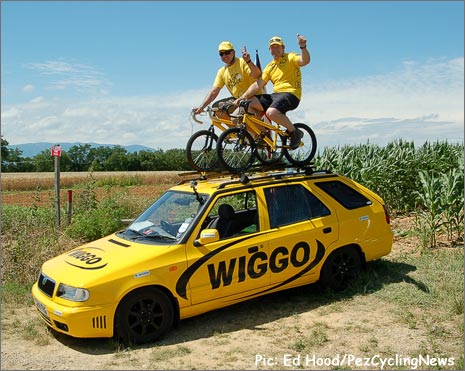 Two lads from Norfolk have done a job on the family Skoda – some folks will do anything to get on the TV!

Millar takes the intermediate sprint – our guess is that they just rode through it. 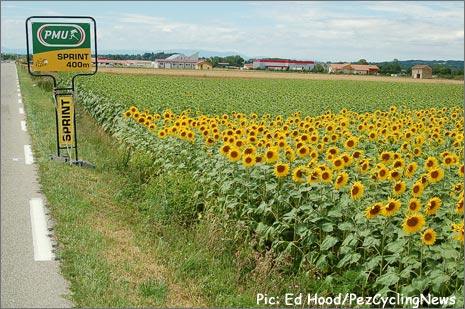 The road continues to drop the sun has turned up the volume and there’s just one major obstacle – the third cat. Cote d’Ardoix.

The crowd is good and if anyone is going to slip the break, it may well be here.

The policeman chastises folks who wander into the road, the kids get fractious, cars, motor bikes, air horns – and finally, the ‘chop’ of rotor blades.

We all ease out onto the tar. 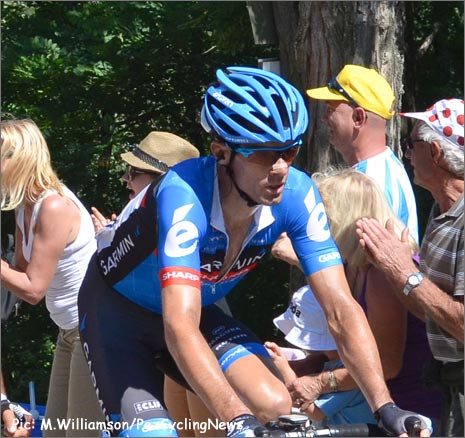 Millar leads the break – that’s a winner’s face if ever I saw one, grimly determined, the rest merely grim.

With the break gone 10 minutes the blackboard man’s motor bike roars past – he’s got some fast riding to do to get that info to the break before the finish. 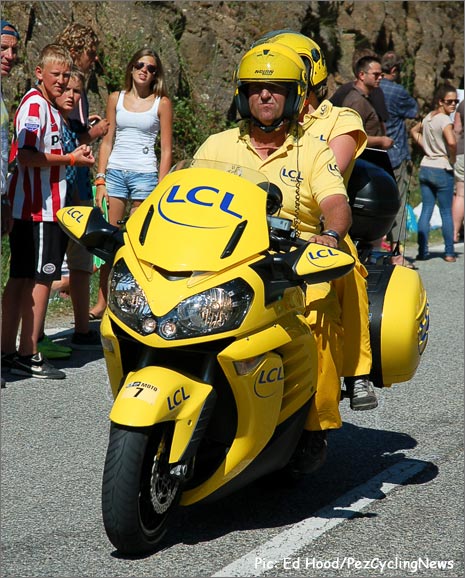 It’s 11 minutes before Sky’s clockwork soldiers march past; Eisel, Knees and Boasson Hagen lead – Bradley is well there, as is the whole peloton. 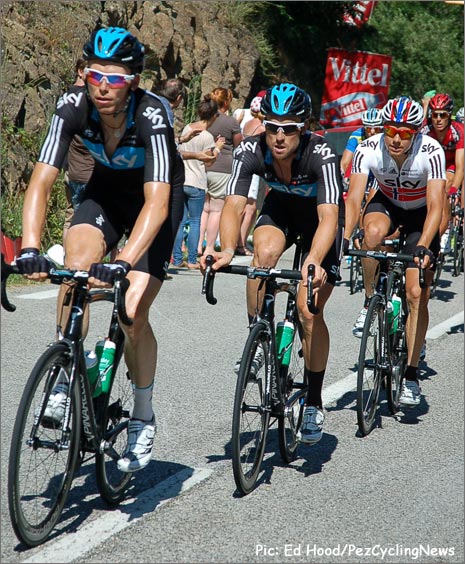 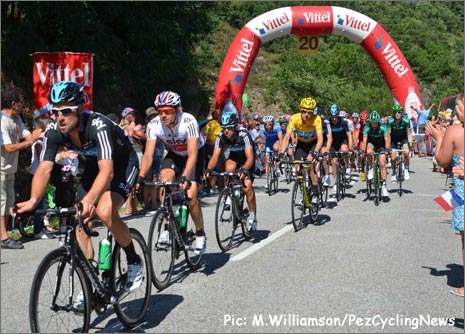 All the sprinters are there, including Cavendish, so the voiture balait is right behind – sprint to the car and go! 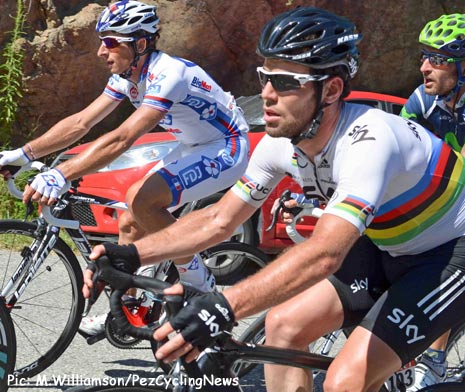 Martin beeps, honks, swerves, brakes and swears us up to the end of the convoy and safety from the civilians and crazies.

The satnav directs us off the parcours – no point in enduring finish line chaos if we don’t have to.

The commentators on the radio are getting excited; Martinez goes, we wince, Peraud tries – we have to park up and listen properly . . .