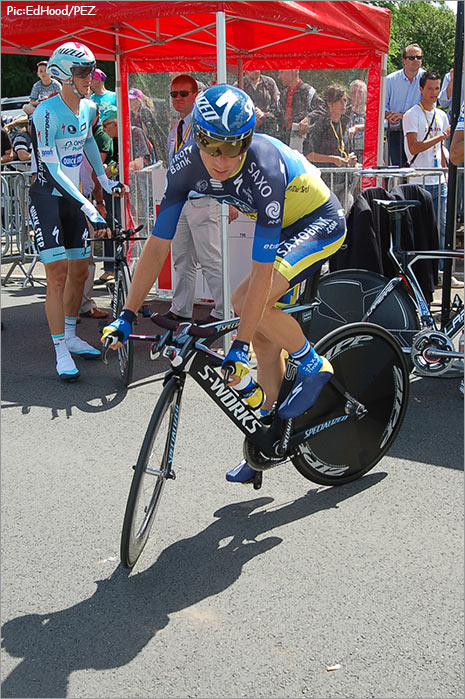 Michael Morkov went into the Tour as ‘the guy who was up the road a lot in the Classics.’ He came out with his reputation greatly enhanced, a pile of polka dot jerseys and a whole army of new fans. He’s still on the learning curve, but getting closer to the top, every year.

Kris reckons that Michael will wear yellow, one day – I agree. 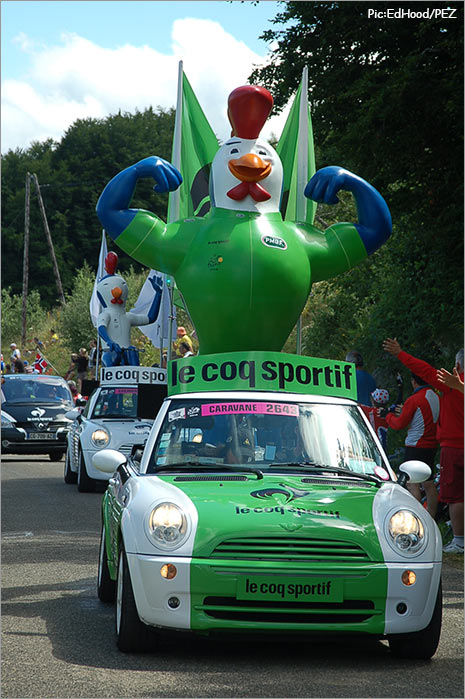 I know it’s crass, trivial and commercial – but I love the caravan.

The guys who design the vehicles come up with ever-weirder contraptions.

And is just me, or does le Coq Sportif green jersey bear an uncanny resemblance to The Tourminator? 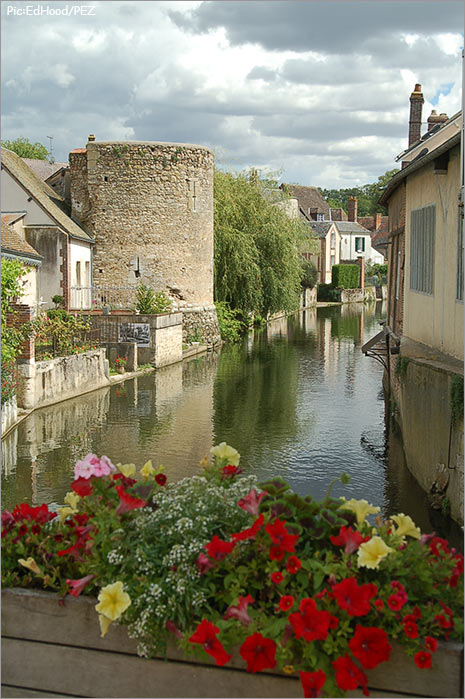 On the way down to the start of the final time trial with the atmosphere so tense you could feel it in your stomach, I looked to my left as we crossed a little bridge – and took this shot.

There’s beauty everywhere in France – and you never have to look too far. 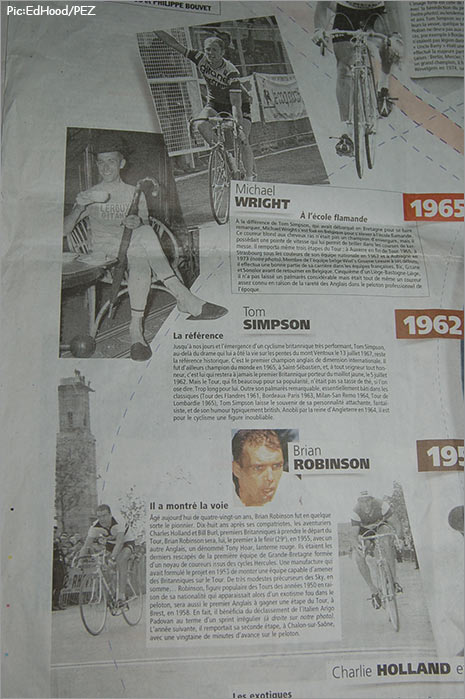 Its 50 years since Tom Simpson became the first rider from Britain to wear the maillot jaune – and 45 years since he died on the slopes of the Ventoux, chasing his impossible dream.

It was so nice to be there on the day that David Millar remembered him in the best way possible with that brilliant stage win.

And it was fitting that Wiggins should ride onto the Champs Elysees in yellow on such an anniversary. 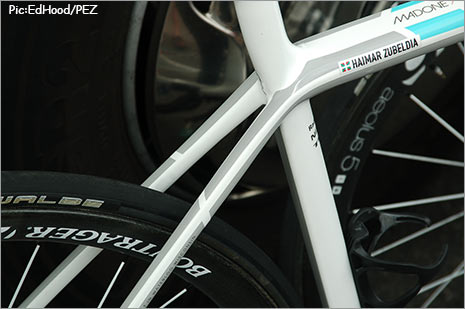 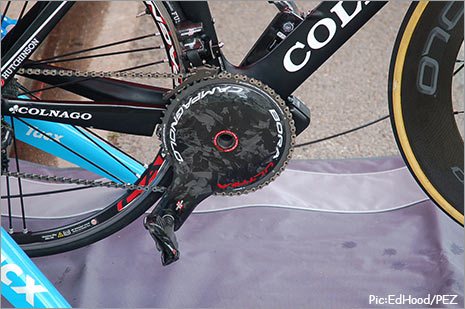 One aspect of the Tour which has changed little over the last century is that it’s a huge bill board for the bicycle industry.

With more TV than ever; magazines focussing more and more on ‘tech;’ sites like ours keen to bring pictures of new product to their readers, the Tour is the biggest shop window in the world for ‘bike bits.’

The look of bikes continues to change – Trek have dispensed with the rear brake bridge and mounted the back brake below the bracket to give a look alien to a traditionalist.

Meanwhile time trial bikes continue to evolve – the set designers for Star Wars must have had a hand in the new Campag Bora carbon chainset. 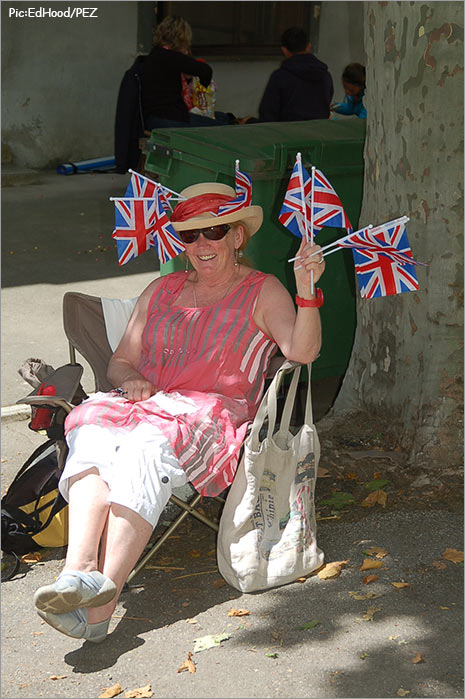 Whilst some have taken things to extremes – there was one guy on a mountain stage running naked alongside the riders – people do get emotionally involved in the race.

And if it adds colour and doesn’t endanger anyone, there’s little wrong with that. 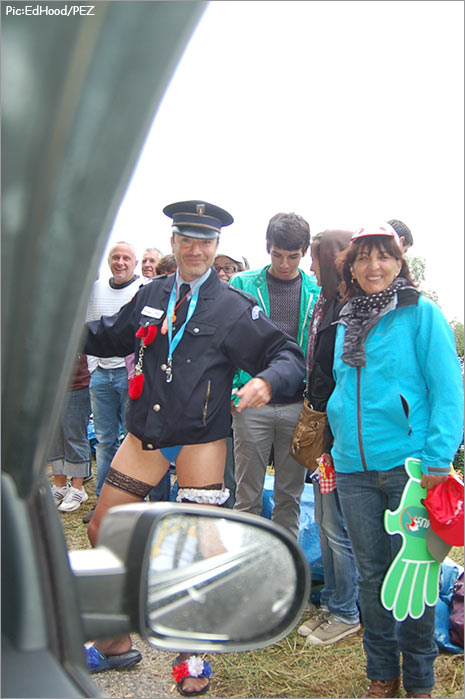 They’re here to stay, but I just wonder where they get their ideas from. 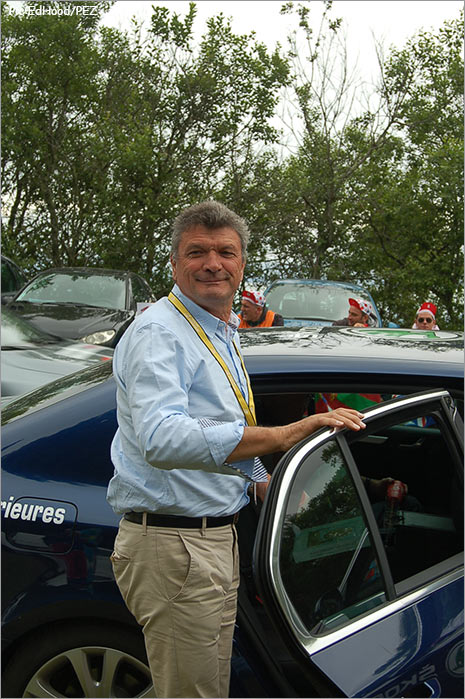 The Tour looks after its own; twice winner Bernard Thevenet and ‘eternal second’ Raymond Poulidor are always on the race.

Thevenet rarely frowns, has time for all the handshakes in the world and still looks in good shape. 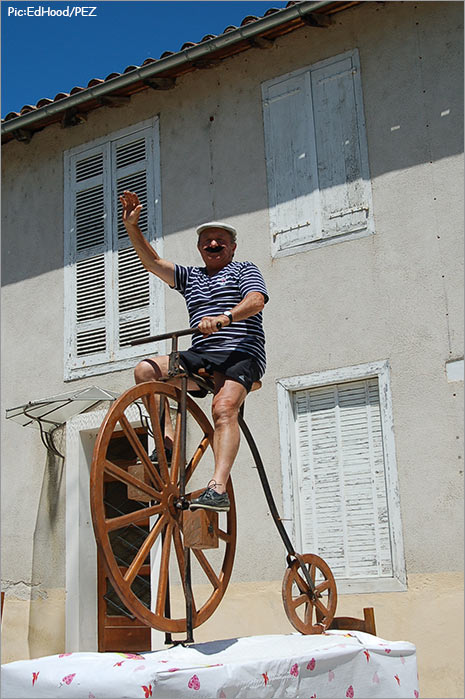 It may make guys like Viktor ill, but all of the villages along the way make their own contribution to le Tour as a visual spectacle. 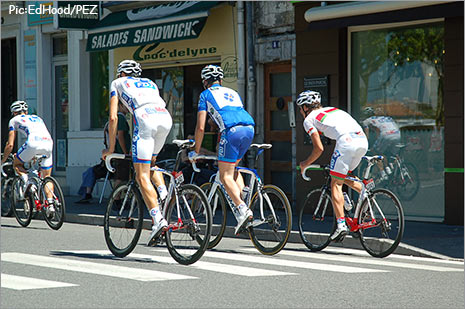 These days, a gentle potter out to a cafe – a chat, a coffee and maybe a cake have taken the place of three hour runs.

F des J ambled through the streets of Pau as we enjoyed our late morning kir. 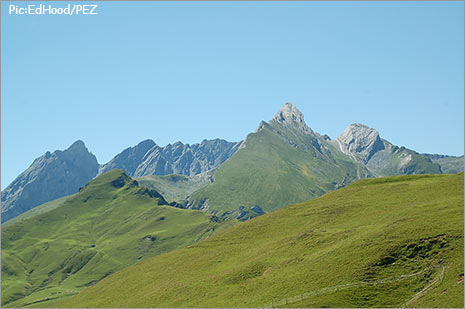 If there’s any doubt that shaping the planet was a violent affair, the Pyrenees quashes that.

The rock is stretched, bent, burst and broken on a vast scale – an awesome place to watch bike racing. 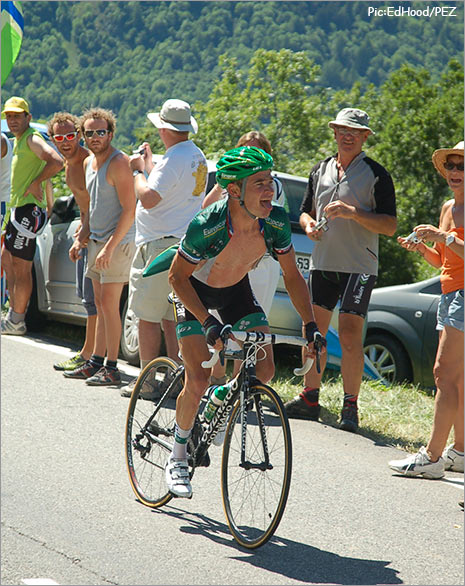 ‘Tommy’ Voeckler – even his nickname is bearable – love him or hate him, the race needs him.

Whilst we can all appreciate Sky’s dominant tactics, watt outputs and ‘clockwork soldiers’ approach – to see the Frenchman alone on the last climb with jersey flapping, tongue dangling, rocking and rolling his way towards the summit and glory, is what the Tour is all about. 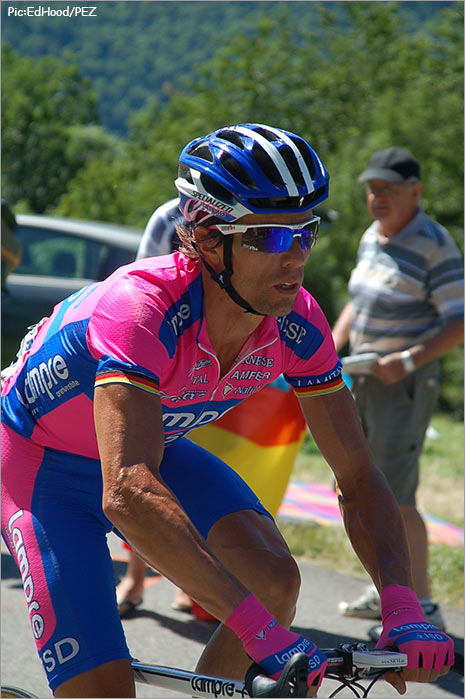 He didn’t win anything and his sell-by date is approaching, but Danilo Hondo is still the coolest looking man in the peloton – no other excuse required for showing his picture. 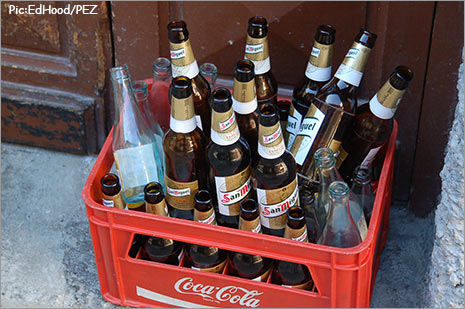 In the interests of the PEZ budget, we’d been sticking with low budget Formule 1 hotels.

But in the Pyrenees we had to cross over into Spain for accommodation.

There was no wi-fi in the rooms; but there was a good signal in the bar – and tapas, and beer.

Patatas bravas, cool San Miguel and your pictures flying into the ether – there’s nothing more a journo abroad can ask for. 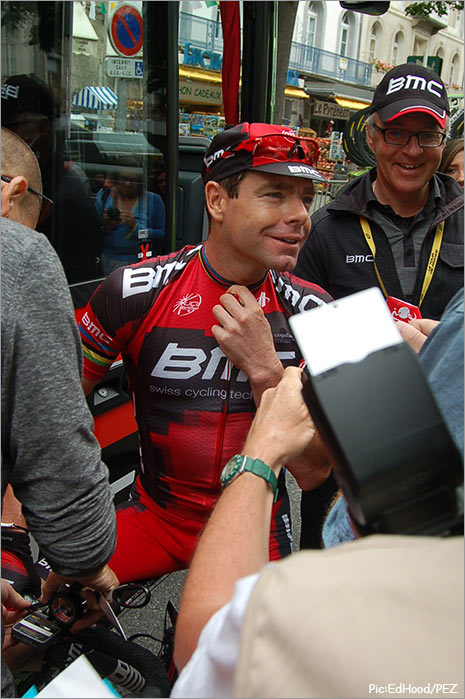 The Australian’s reputation of being ‘spikey’ was way off the mark in this Tour – dignified in defeat and with plenty of time for everyone, his bearing on this trip to the flip side of glory will have won him many new admirers. 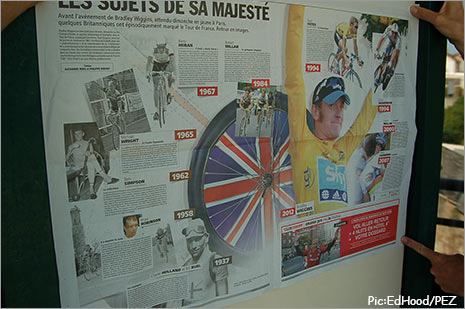 L’Equipe does it right; perhaps my favourite piece of the race was the double page spread they did on Great Britain riders’ performances in le Tour.

But there’s still a bit of me says the Gazzetta is just that bit better – but maybe it’s the pink paper? 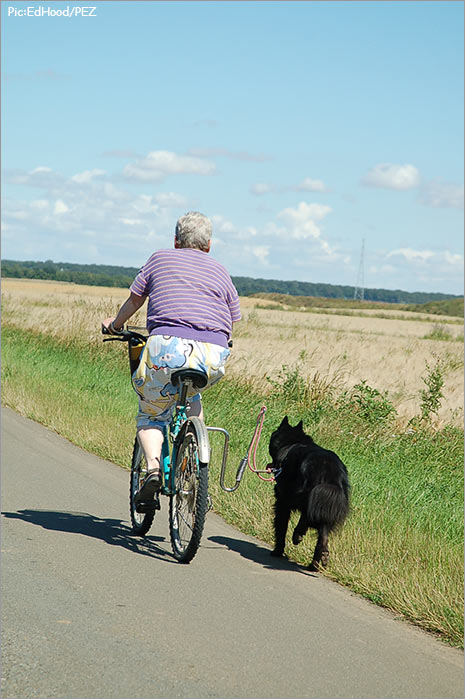 The big cities in France are pretty much the same as they are all over the globe – crazy traffic, not particularly friendly, fumes, noise . . .

But leave the cities behind and the pace of life comes right down off the 53 ring – and a lady can take her dog for a walk without any horns blasting. 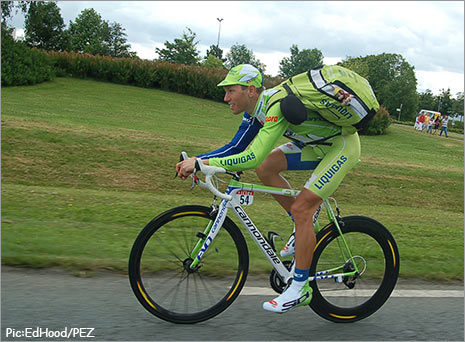 For all the air-conned coaches and cosseting of athletes; sometimes it’s just like riding the local time trial – you get your bag on after the race and pedal home.

We snapped Liquigas’s Kristijan Koren riding back to the digs after the final TT. 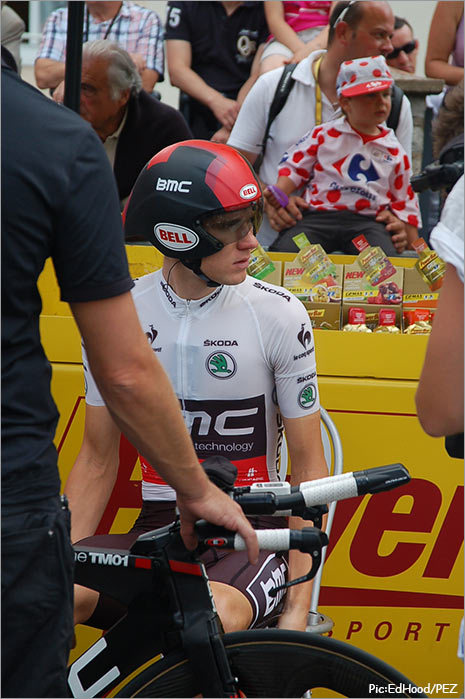 Tejay van Garderen reminded me of Greg Lemond – strong in the time trials, hard to drop in the mountains, determined, ambitious.

It’ll be a surprise if we don’t see him on the podium within the next few years. 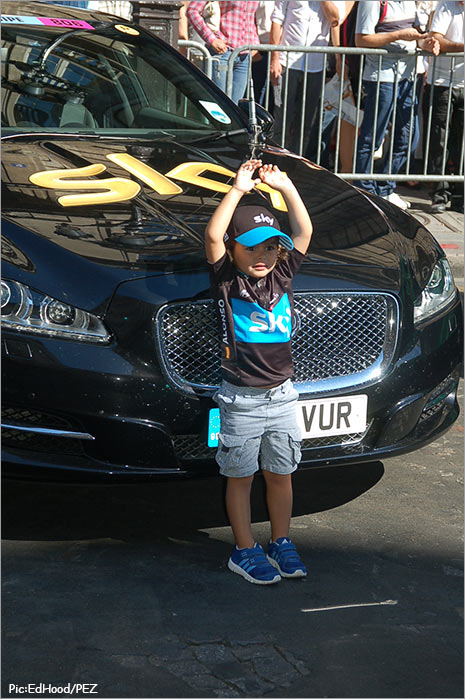 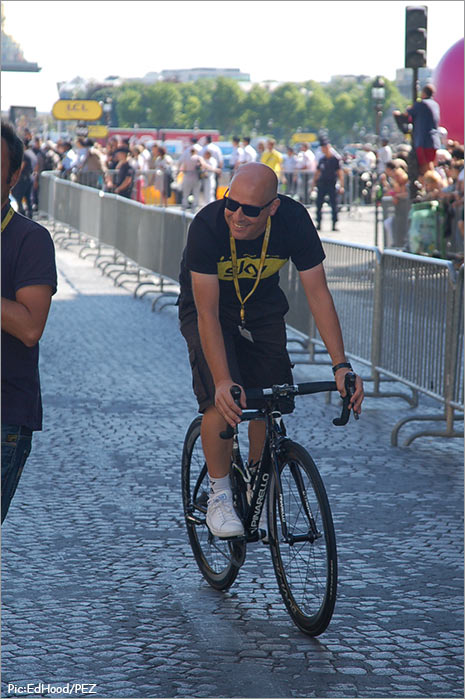 It’s perhaps not ‘edge of the seat’ stuff, but it’s brutally effective – and they won the race.

Respect to Sky Procycling and Mr. David Brailsford – he dared to dream. 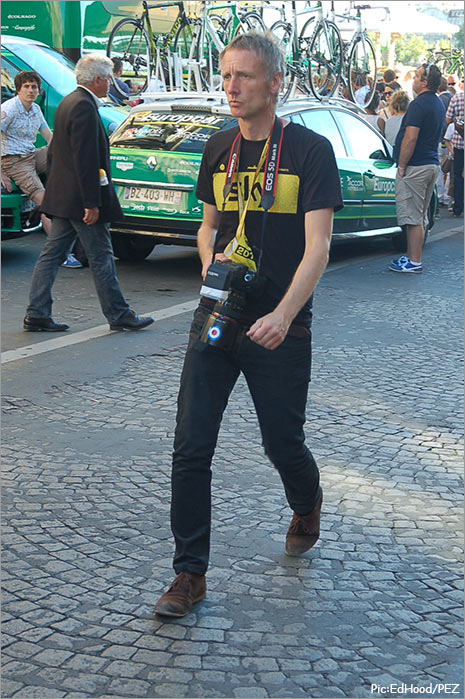 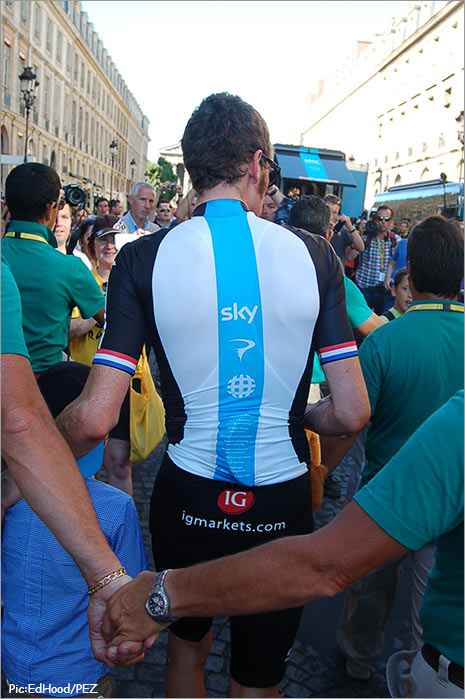 Personal photographers, ‘laddish’ victory speeches, swearing at the media – I guess I’ll have to get used to all of that.

But to Bradley Wiggins, congratulations and respect.

I didn’t think you could do it – I’m happy to be proved wrong.

And before they put me back in my box until the Vuelta, I’d like to say thank you to:

Richard Pestes for again trusting me to record the world’s greatest stage race on your behalf.

Chris Selden and Jered Gruber for all their behind the scenes work which makes the site look as good as it does.

Martin Williamson, for all the kilometres driven, wi-fi wrestled with, pictures edited and for putting up with me – no easy task.

But most importantly to our loyal readership – without you there’s no point to it all.