It’s Rest Day #1 at Le Tour, and while Gord’s fantastic week 1 Roadside Reports got us off to a flying start, there are 11 stages still to go. The PEZ baton has passed to Cap’n Ed Hood & Martin, and Ed filed this update on his pre-Tour predictions…

The end of the first semester, the classes were:

Before the Tour started, I forecast how Mr. McQuaid’s brightest World Tour pupils might perform. The first name I mentioned, at #12 was Samuel Sanchez (Euskaltel & Spain). 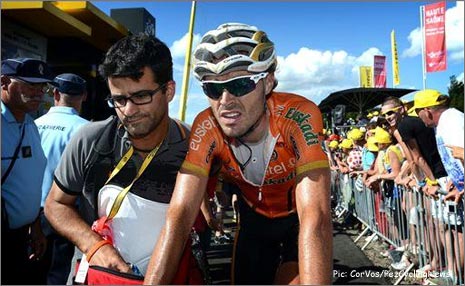 The Spaniard’s prologue wasn’t the best but the fortunes seemed to be on his side as he dodged the crashes and was looking comfortable. But approaching the crucial first time trial, his luck ran out, he came down and was forced to quit with a broken hand.

Not a good start to my predictions.

At #11 I had Alejandro Valverde (Movistar & Spain) – caught up in the crashes and author of a poor time trial, to boot; he’s languishing in 28th spot at 10:46. A top ten looks a remote possibility and it proves again that it’s very difficult to come back from a long period of absence from the peloton to the top in World Tour racing.

Things get better at #10 with Denis Menchov (Katusha & Russia) – after a strong prologue he ghosted through the first week, lost a little time on Saturday, was there when it mattered on Sunday and was only a single second behind Nibali against the watch. He sits fifth on GC but to me that looks as high as he can go; he’s not a man to attack in the mountains – his forte is ‘always being there’ but that’s not enough against chrono specialists like Wiggins, Froome and Evans. 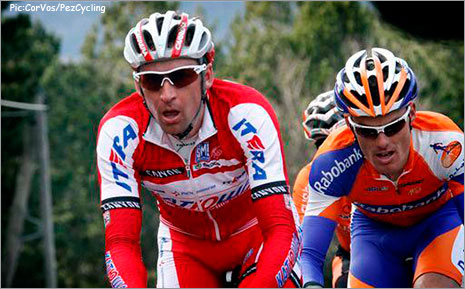 The ghost of the modern peloton, Denis Menchov has put in a very solid first week.

Robert Gesink (Rabobank & Holland) was number nine; it’s hard to believe this is the same man who won the Tour of California – he languishes in 58th spot @ 28:27. It gives him the freedom to make a bid for a mountain stage, but with his morale where his socks stop, it’s unlikely. 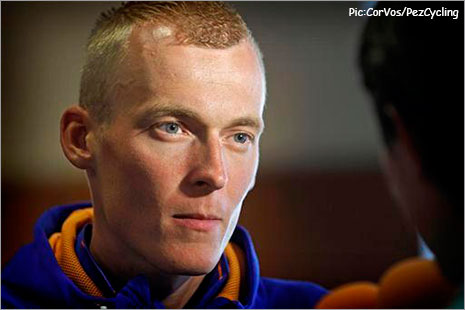 Gesink’s icy stare has been as strong as ever this week but he seems to have left his climbing legs in California.

Andreas Kloden (Radio Shack & Germany) at number eight rode a decent time trial but had two less than average days in the hills prior to that. He lies 15th @ 6:33; there won’t be a third Tour de France podium for Andreas. But for all the talk of ‘crisis at The Shack’ they still have two in the top ten – Zubeldia and Monfort with Cancellara wearing yellow for the first week. Meanwhile, in Austria, Jakob Fuglsang won the overall. 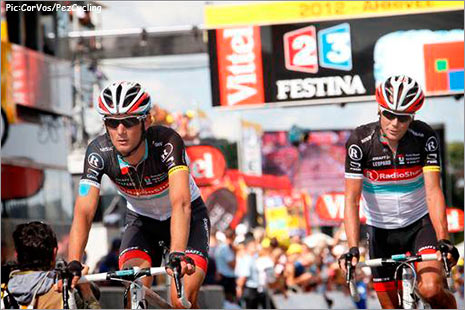 The Shack have been there in numbers so far this Tour but an individual podium place seems unlikely. Team GC looks good though, they currently lead Sky by 1m25s

Ryder Hesjedal (Garmin & Canada) was my ‘lucky seven,’ but it didn’t work out like that – felled in one of the many crashes which left the Garmin bus looking like a casualty clearing station – he’s home in Girona.
But the big man’s morale is hard to dent and he’s looking forward to the Olympics as Canada’s sole entry in the men’s road race.

Levi Leipheimer (QuickStep & USA) was at six but with his name being bandied around in connection with ‘LanceGate three’ (or is it four?) it was always going to be hard to get his mind 100% right. The pros will tell you that World Tour races are always faster and more competitive than ‘normal’ races – and le Tour is faster and more savage, again. Levi’s third in the Tour de Suisse boded well – but here in France he’s 19th @ 8:34.

A man showing a bit of grinta after coming down hard then riding a not too disastrous time trial is my number five, Frank Schleck (Radio Shack & Luxembourg) – he’s well placed to be allowed to go up the road in the ‘haute montagne’ with his gap to Wiggins standing at 8:19 with the classement showing him in 17th place.

My first ‘podium possible,’ Jurgen Van Den Broeck (Lotto & Belgium) in fourth spot had desperate bad luck on Saturday, shedding his chain right at the start of the horrible finish ramp to the Planche de Belle Filles on Saturday. I hear that if you unship your chain with certain electronic gears, the controller has a bit of a nervous breakdown and it’s difficult to get it back on the inner ring. But for that, the big Belgian would be higher up the rankings than ninth at 5:20. He looks full of riding – he needs to be if he wants to enjoy the view from the podium in Paris, two Sundays hence.

Vincenzo Nibali (Liquigas & Italy) was our first man for the podium, we’re not too far away – he’s fourth @ 2:23. The press picked up on his ‘not impressed by Wiggins’ comments – I’ve not seen a translation of the offending l’Equipe interview but what’s he meant to say?

‘Wiggins is the best and we’re all riding for second?’

His time trial was very respectable and he’s full of spirit. Let’s hope he gets support from Liquigas come the mountains.

I had Evans (BMC & Australia) at number two, I got that right. Whilst there’s an aura of inevitability swirling around Wiggins bid for victory, nothing is certain ’til that last lap of the Champs Elysees. Evans is a shrewd old dog and will already have plans for how he’ll take the battle to Wiggins – and perhaps not where we might expect it. On the minus side, he knows that he’s going to lose more time to Wiggins in the 53 kilometre stage 19 time trial. 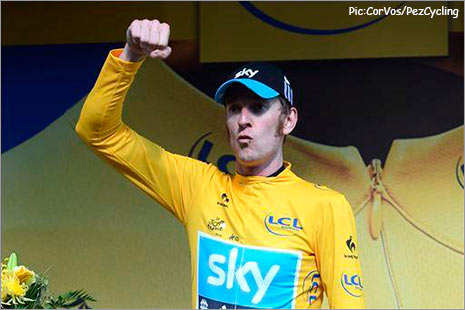 And I got numero uno right, Bradley Wiggins (Sky & GB) hasn’t put a foot wrong, so far – good prologue, ducked the crashes, well there in the first hills to grab yellow and thermo nuclear weapons deployed in the time trial. His team is strong, and whilst it’s inevitable that some of them will falter; so will Evans’ cadre – and the Briton knows now that he holds an ace for that final chrono. 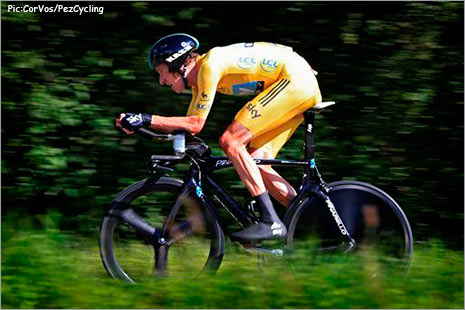 With his time trialling skills and a strong team, Wiggins is certainly our A grade student after the first week.

But what of the interlopers?

Chris Froome (Sky & GB) sits in third spot, but breathing down Evans’ neck. Froome almost won the Vuelta, last year – winning a very tough mountain stage, beating Wiggins in the long time trial and coming a close second on GC. His Tour shows a similar pattern with a tough hilly stage in the bag, a stunning chrono ride and a podium looking well possible. It’s unlikely he’ll ride for any motive other than Wiggins GC ambitions, but with the King of the Mountains weighted towards the big climbs, that competition is well with his grasp – as is a podium. 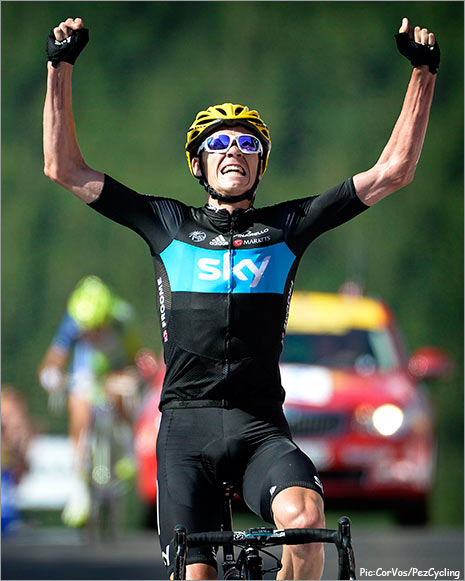 With one stage win in the bag, 2nd place in the KOM jersey and 3rd on GC the Tour has certainly started well for Froome.

Haimar Zubeldia (Radio Shack & Spain) sits in sixth spot. The Spanish climber turned in a good time trial and had us checking the record books to confirm that he’s been twice fifth overall and once ninth in the Tour. The ‘bigs’ won’t cut him too much slack in the mountains with those results on his CV.

The most exciting prospect in the top ten has to be Evan’s 23 year-old team mate, Tejay van Garderen (USA) in eighth spot. Despite his youth he’s been on the podium in the Tour of Turkey, Dauphine Libere and Tour of Colorado. His time trial was outstanding and whilst the main goal of his team is to place Evans on top of the podium in Paris; en route that goal he may well be able to retain his hold on the white jersey of best young rider.

It’s hard having a famous dad, ask Axel Merckx; ‘he’s not the rider his father was,’ the critics remind us, sagely. But who the hell was? Nicholas Roche (Ag2R & Ireland) has the same monkey to carry and a bit of roller coaster form to contend with. He was 15th in le Tour and seventh in the Vuelta in 2010 but apart from a stage win in Beijing, last year didn’t stand out.

This year, his Ag2R equipe is ‘all for Nico’ – without that pesky Gadret character – and a top ten is well possible. Apart from anything else, his dad needs the name awareness to sell more copies of his biography.

The next term starts tomorrow, subjects include:

– dealing with blocked legs after the rest day.
– holding your own on mountain passes.
– worrying about the cell phone bill.

And last, but not least:
– dealing with Lance questions at the press conference.

We’ll give you another progress report on the second rest day, meanwhile – keep it PEZZED.

Toolbox: So Many Questions

Tour Coach: As it Looks From the First Rest Day