Two weeks ago, I was sitting in a departure lounge in Geneva airport. My Tour adventure over for another twelve months, I was priming myself to readjust to real life – since I got home, Wiggo’s been on the front pages of every major newspaper in Britain, the headline story on every national news broadcast, congratulated by Queen and country. Now that I’ve decompressed from twelve days inside the Tour bubble, what stood out for me this year? A few personal observations…

The Champ
Race to win. Prepare like a f*cking maniac. Take every event by the balls. That might not be quite the language the Sky Professional Team’s boffins would use, but that was the philosophy. Go hard from the start, because a pro rider’s shelf life is short. The rarely-in-doubt champion started a full-on assault on the Tour basically the moment his 2011 challenge ended on a roadside verge on the way to Chateauroux. 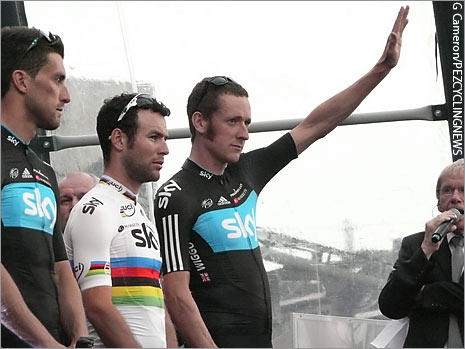 Bradley Wiggins transformed himself from a serious Tour contender when he started Paris-Nice in March to a live favorite by the time he stormed through the Criterium du Dauphine to a bona fide patron by mid-July. Pre-race he was making the right noises, with a slightly bolshy performance at the Sky press conference. 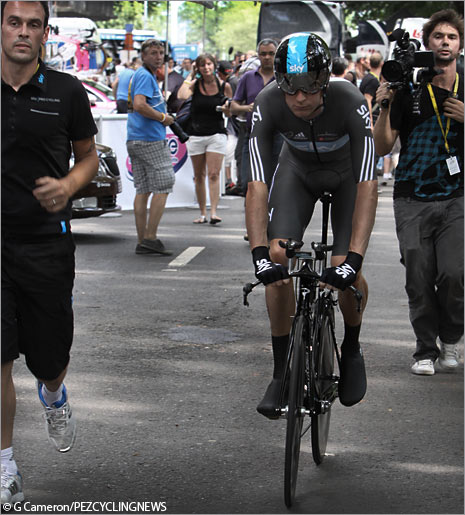 On the bike, he was ferocious. He was always a beast of a time trialler, but now he was better. This was the Tour he had to win. He did it brilliantly. Shipping only seven seconds to a reborn Cancellara in the opening TT was basically as shoddy as the whole Tour got for Wiggins. It was a masterful performance.

There were moments of controversy, but these seemed to be magnified more in the UK than in France. The host nation seemed to approve of his opinionated, fluent-French-when-he-felt-like-it, Mod individualism. 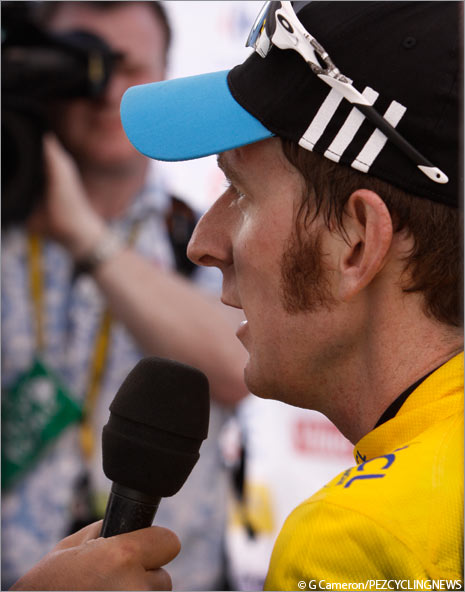 I can’t honestly say I consider myself a flag-waving Brit. However, as a cycling fan, looking at the impact Wiggo’s win could have, I’m f*cking proud of him. Everything bike-related should get a boost in the UK, from local bike shop sales to policy pressure on politicians.

The Sky ‘machine’
All around Wiggins, the organisation seemed perfect. Sky played a blinder, with Wiggo never lower than second overall. And they pulled it off with only seven team-mates for most of the race after losing Kosta Siutsou on stage three. Knees was steadfastly reliable. Boasson Hagen immense on the front. Porte and Rogers remorseless on the slopes. Even the world champ was fetching bottles, sitting on the front when he could. 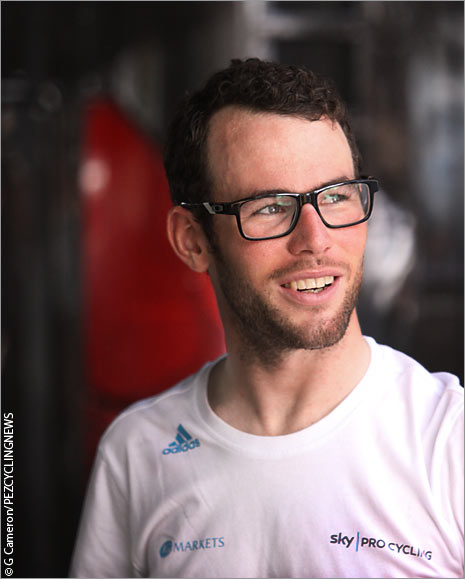 You’re something special when you spend most of the first week of the Tour picking yourself off the tarmac. And when most people think you’re having a quiet Tour with little to ride for … and you end up on the ‘plane out of Paris with three stage wins, and a fourth in a row on the Champs Elysees. 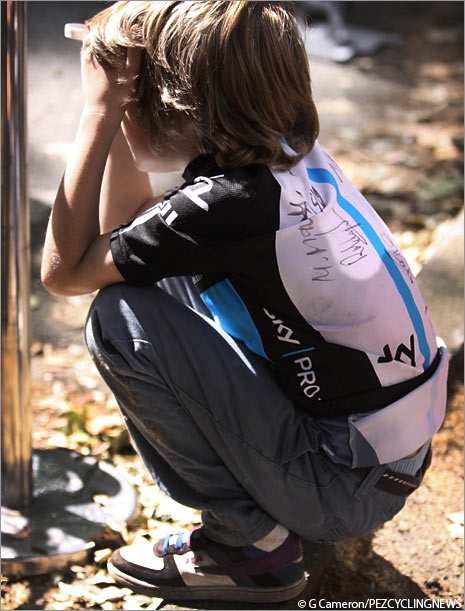 Around the team buses this year, Cav seemed like he was on a cloud, happy, almost pressure-free. Maybe the Sky set-up isn’t geared to a sprint train, but Cav doesn’t really need one anyway. He posed with his girlfriend, posed with his baby, shot the breeze with Brian Holm and Rolf Aldag before the prologue, smiled for photos, signed kids’ shirts. He looked like a man at ease. 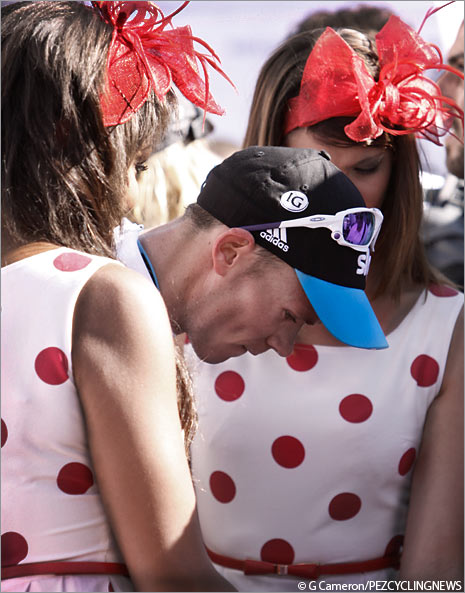 The only times the team message seemed to get scrambled was when the slopes got to their most intense. Chris Froome looked immense at La Planche des Belles Filles, even more so at La Toussuire and Peyragudes. Did it ever look like mutiny was seriously on the cards, though?

Froome did his job. A mountain top stage win, and a lot of kudos gathered. The fact that he bottled up whatever frustration might have been brewing before delivering his team leader to Paris will have been carefully noted by everyone else.

Froome didn’t lose a Tour win as much as store up a tankload of favors for a bright future. Loyalty commands respect and a premium …

Contenders – ready?
Cadel Evans battled bravely but was unlucky to get sick, Hesjedal and Gesink were unlucky to crash out, Valverde won a great stage but that was all, Menchov disappeared without trace, Vinokourov’s best days are gone. And as for Frank Schleck?

The last contenders standing at least tried to raise a bit of a fight. 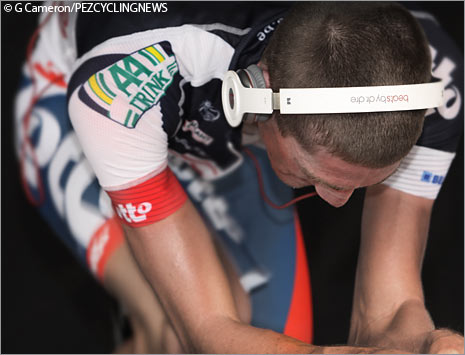 Given that he made it to Paris intact and with a few attempts to break the Sky stranglehold along the way, Jurgen van den Broeck can be happy with his Tour.

The Lotto-Belisol man had the backing of a strong squad – even if they spent the first week or so delivering stage wins for Greipel. A more challenging route next year, and the probable return of Contador and Andy Schleck should open things out a little. 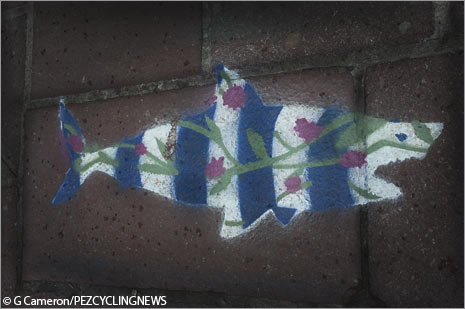 I was impressed by Vincenzo Nibali who was the only guy offering any real resistance to Wiggins and Froome, even if he was pissing against the wind by being forced to do it all by himself. The Shark of the Straits gave it a dig up hill and down dale, but he needed a bit more fragmentation of the race to make a difference. Four Sky (Wiggo, Froome, Rogers, Porte) vs Nibali wasn’t a fair fight. 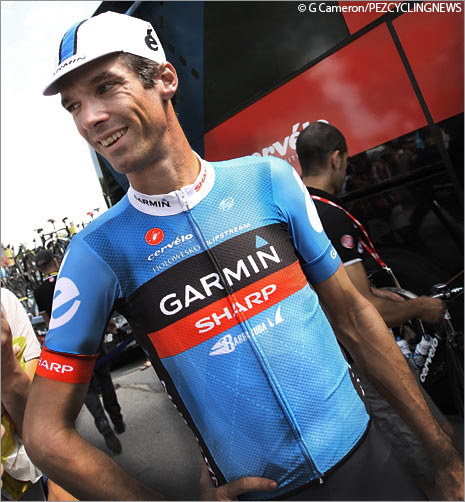 Now, I have to be honest. I took a very late and suspiciously lengthy lunch break when David Millar was in the break. Just as well the neighbours were away as I roared my fellow ‘Scot’ to the win.

Millar divides opinion, his born-again anti-doping stance sticking in the throats of a vocal minority who won’t accept that some people can – you know – change. Regardless, at 35-years old, and with a ton of experience behind him, that stage victory was as fine a tactical masterclass as I’ve seen. Race craft, nous, experience, desire. 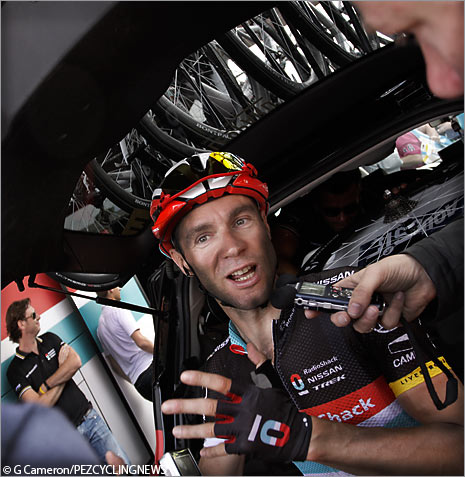 Even older is Jens Voigt, who didn’t get the win he probably deserved after attacking like crazy and working like a fiend. For his interview with the UK broadcaster ITV4 alone, he deserved a reward.

How many times did he tell his legs to ‘Shut up’ when he was giving it the big stick? Every cell in body was screaming ‘Stop it, Jens! We’re tired! Millions of them!
Hopefully, the German will stick around for at least one more year – please, Jens?

Speed
Cav got three stage wins. So did the impressive Andre Greipel. Valerie was outside the Lotto bus in Abbeville when Greipel came out to speak to a journalist who was hanging around. 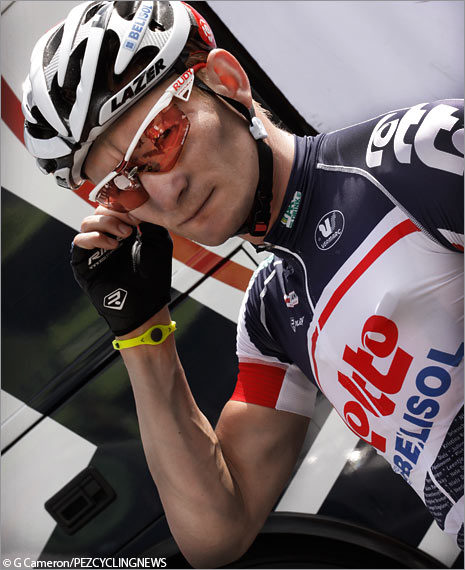 “Do you want an interview?” Greipel politely enquired.
“Errr, well I’m actually waiting for someone else …”
“Oh, uhh, OK …” Greipel turned and started back up the steps of the team bus.
“But good luck for today …”
Greipel won that afternoon in Rouen! 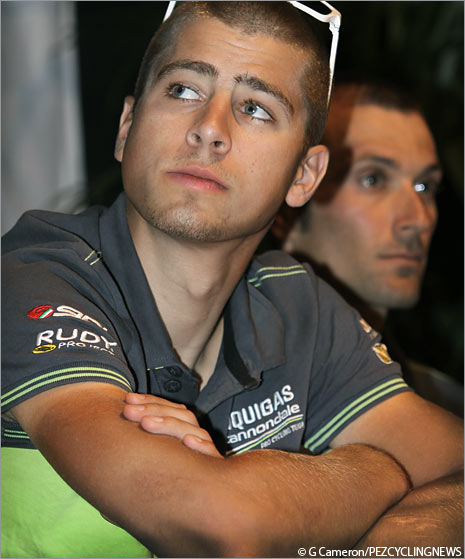 No surprises that I’m also hugely impressed by Peter Sagan. The kid oozes star quality. Even after such a mental season, there were still questions about him going to the Tour. Yeah? Really? In the pre-race press conference, he just looked the part. Assured, confident, a bit cocky – the perfect star? 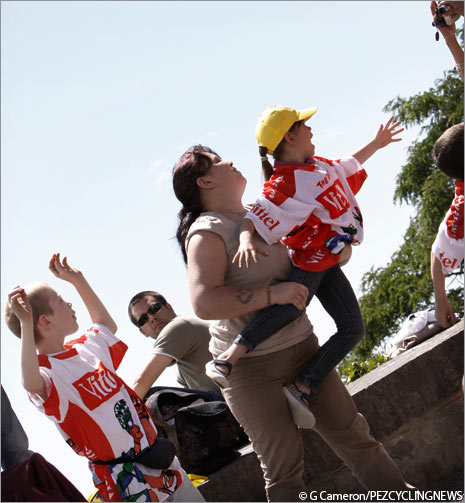 The riders make the race, not the terrain, is what we’re always told. Well, the fans make the race, too. Without them, there is no Tour. There’s room for everyone, from the youngest to the oldest. 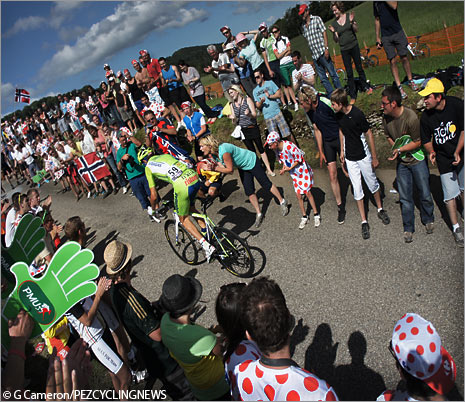 Regardless of who their favorite might be, everyone gets cheered on. Up on the Col de la Croix, Alessandro Vanotti was the beneficiary of a whole lot of Tour love … 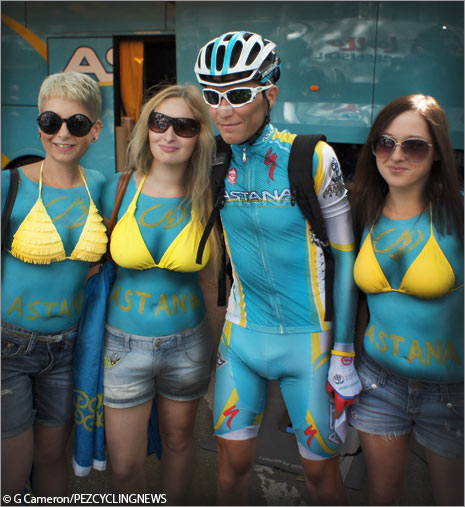 Less forcefully, the very photogenic and equally charming Team Astana Girls have travelled Europe following their team: Paris-Roubaix, Liege-Bastogne-Liege, Giro d’Italia and the Tour. Gracefully handling a lot of requests for pictures, they knew their stuff about bike racing and brightened up Liege. (You can follow them at: twitter.com/TeamAstanaGirls) 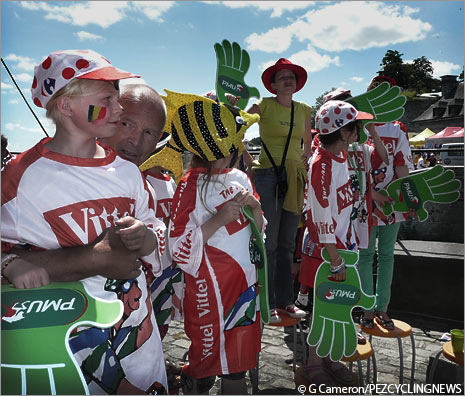 High above the River Meuse, as we sat waiting for the race to roll by, multitudes of kids were singing, dancing, craning their necks вЂ¦ 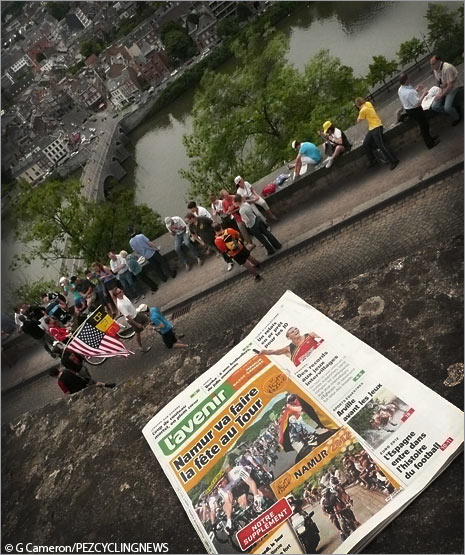 There’s a lot of waiting at the Tour. Sitting in airports, standing by the roadside, hovering at team buses. And it is surprisingly less tetchy than you imagine it will be. Namur’s citadel walls made for a pretty pleasant venue to clockwatch as the morning of stage two heated up. Check the watch, read the paper, have a sandwich… 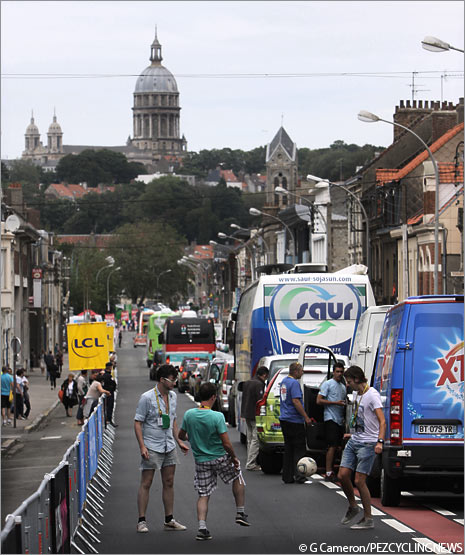 The next day, on the road to Boulogne-sur-Mer, everything got so snarled up on the final climb that different entertainment was required. Even the cops were understanding about the race route being utilised for non-Tour sporting activity. 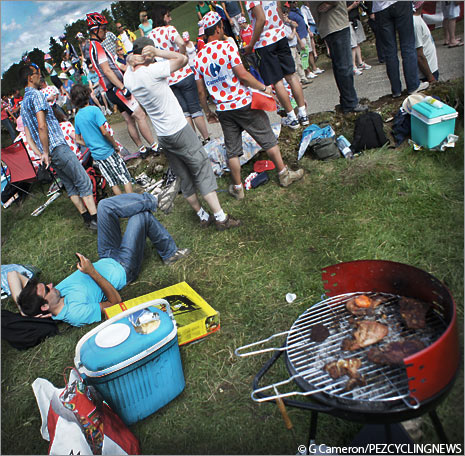 The Tour is about families, too. On the Col de la Croix, our penultimate Tour venue, all generations were by the roadside. Some of the kids were sleeping by the time the race came. Some of the grandparents (or even great-grandparents) had smartly protected their garden with electric fencing to optimize viewing capabilities. And everyone had a good time! 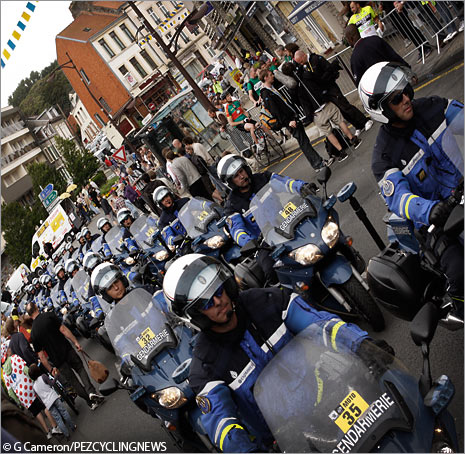 … but it’s just not practical to expect the whole of the race route to be policed. Generally, the fans do a pretty good line in self-regulation. Over-enthusiastic at times, yeah, but infrequently malicious. ‘Tacky Sunday’ was an exception, but you have to hand it to the motorcycle outriders who do an incredible job.

Thirty-six of them steamed past us in nine lines of four after the stage to La Planche des Belles Filles. Once they had passed, we could only see one, as they were so perfectly aligned. 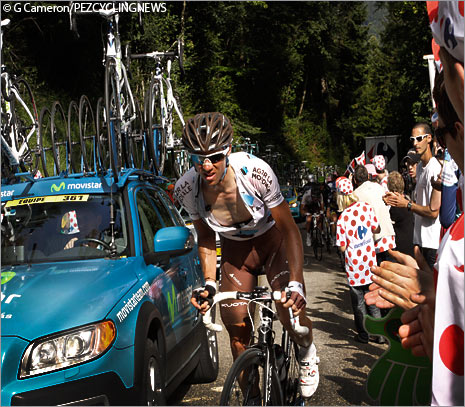 The riders have a lot to contend with, and the big wipe-outs this year were dreadful (Get well soon to all riders, especially Pez favorite Davide Vigano!). It’s at the back of the field, where security gets a bit scatterd, that you realise how precarious an existence it is, with coureurs weaving between team cars and fans on the narrowest fragments of tarmac. 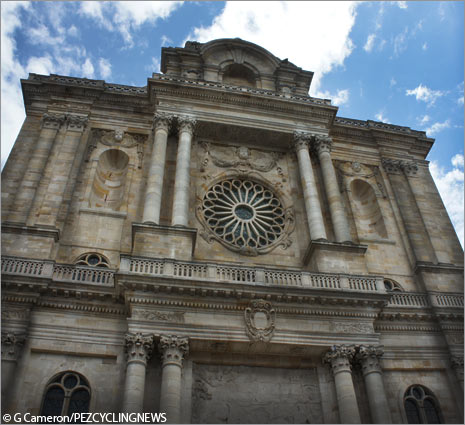 Sometimes faith is what you need to have to sustain you. 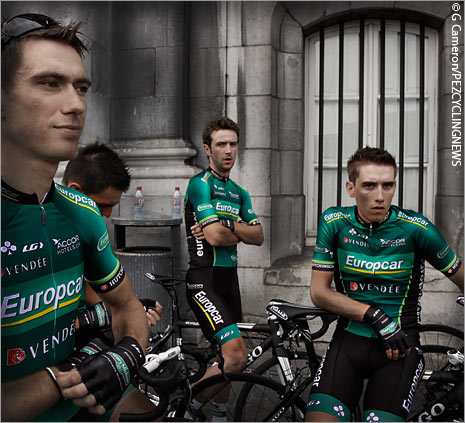 … or grinta. They’re not the biggest team in the world, but Europcar punched above their weight again. Pre-race they looked like an up-and-coming indie band with a point to prove. By the time Rolland and Voeckler had worked their magic, the audience enraptured. 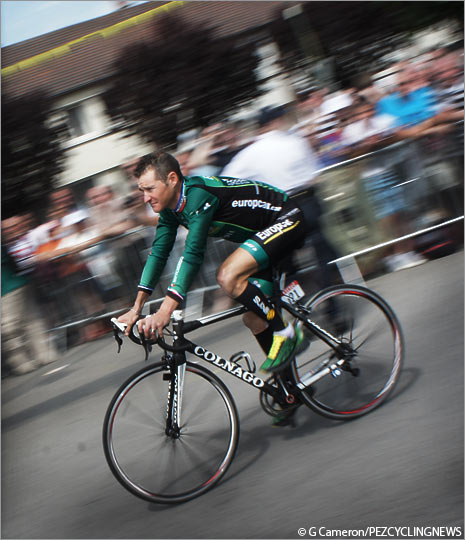 Two stage wins and a King of the Mountains jersey was a fitting reward for an attacking Tour for Tommy V. I’m sure he couldn’t care less that he’s less popular within the peloton than on the roadside. 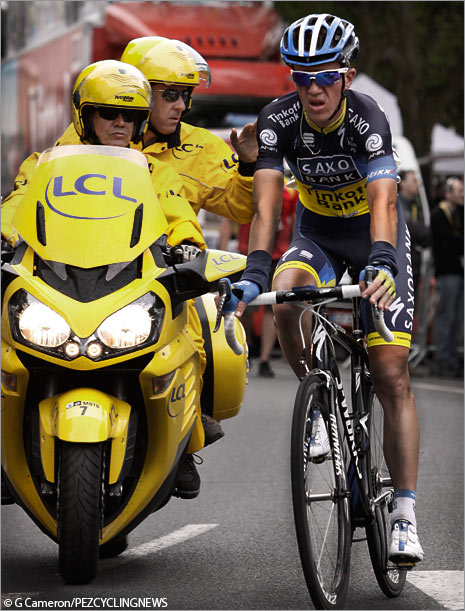 And a tip of the hat to the most combative of them all, Chris Anker Sorensen. He never gets much of the limelight, but constant attacking and an ambitious mid-race attempt at home amputation makes him worthy of a round-up pic!

Thanks for reading, and thanks for your comments! They are much appreciated!