Ed Hood always knows how to sniff out a good time at Le Tour and today’s rest day was no exception as he found himself invited to the Vacansoleil Mussels Rest Day Party. Hhmm, yum! 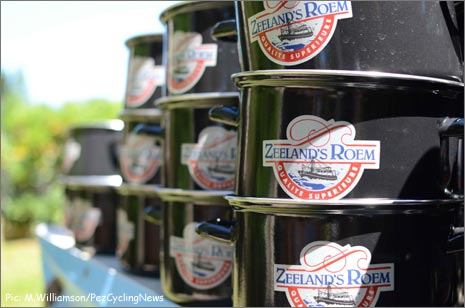 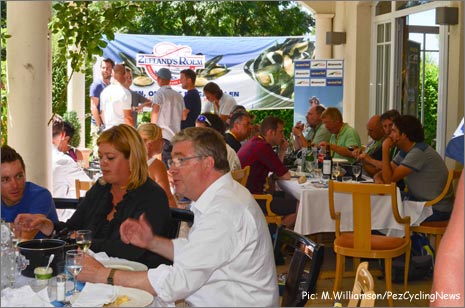 After a week on the Grande Boucle it’s our rest day and there’s only one place to be – that’s the Vacansoleil-DCM mussel party. 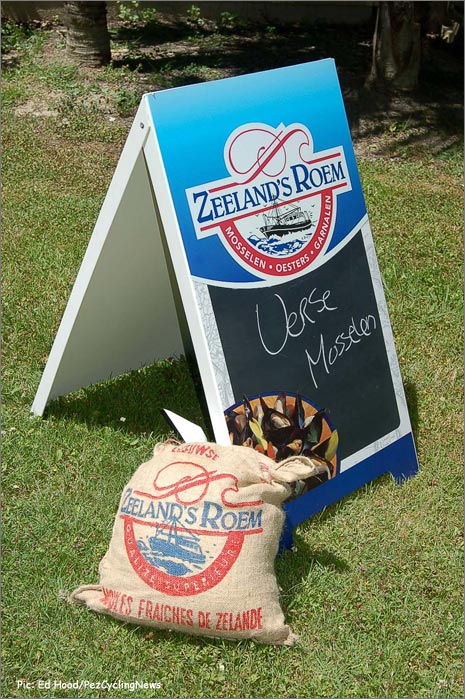 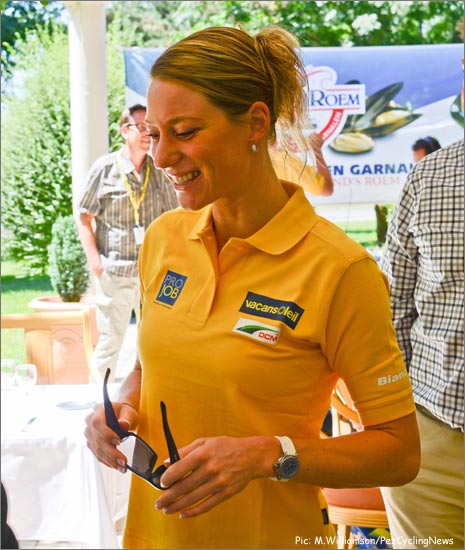 This year the Dutch team’s rest day ‘bash’ was held in Pau – food, vin, sunshine, celebrities and a chance to meet the stars. 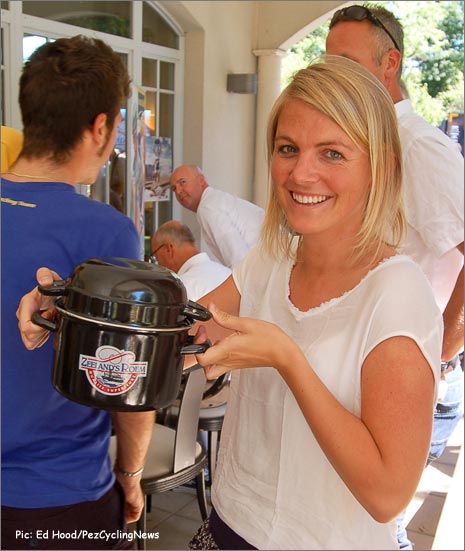 We were seated beside Ms. Els de Ceustar from co-sponsors, DCM when the pots of Dutch molluscs arrived. DCM manufactures specialist fertilisers for sports grounds and uses the team as a vehicle to grow their message across Europe; with the USA the next market to develop.

But back to the stars of the show – the ‘moules’ – which are cultivated from larvae in Yerseke in Zeeland in Holland and can take up to two years to reach maturity. 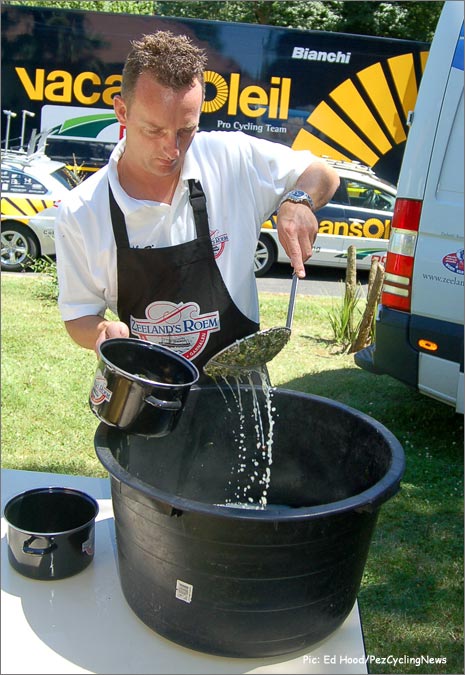 But as Martin says; ‘then we scoff them in three seconds!’

At the next table was six day man and former road star, Leon Van, down in Pau as a guest as the last man from Holland to win a Tour stage in the city. 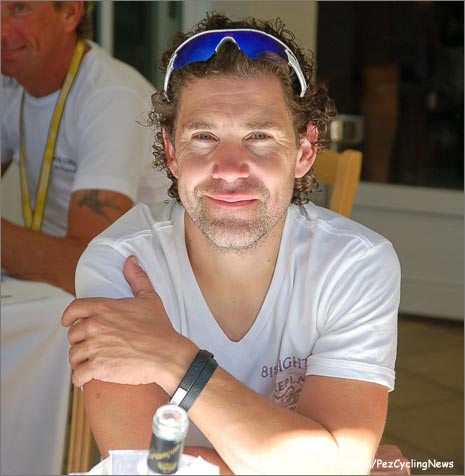 That was in 1998 when he beat some guy called Jens Voigt to the victory. On our table was the team’s Tour rider, Kris Boeckmans, who was eyeing the frites longingly – and no wine either for Kris, although he did produce a sachet of recovery drink and mix it with water. 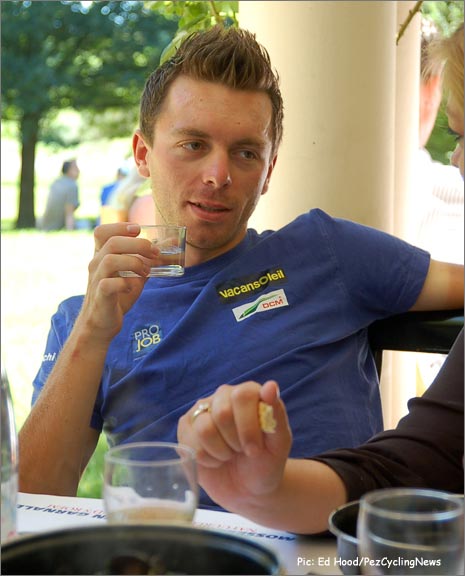 Also on hand was legend (and we use the word in context) Felice Gimondi, whose long association with Bianchi continues. 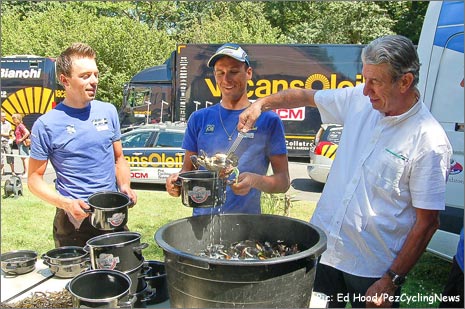 There was a great photo op. when Sr. Gimondi served mussels to Johnny Hoogerland – who’s always keen to fool around for the camera. If you read our Tour sprinters’ piece on PEZ you’ll have seen that the Dutch team ride Bianchi’s celeste gems for 2012. 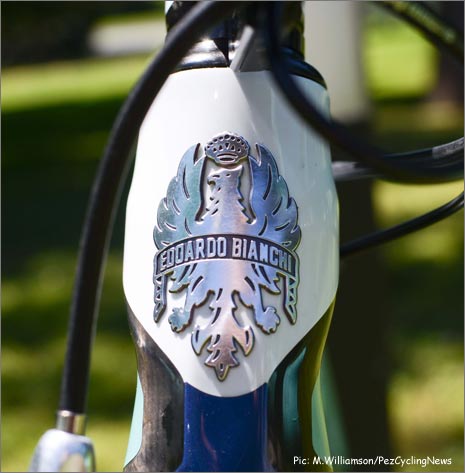 Albeit, we had one reader write in, aghast that a Bianchi should have any other groupset than Campagnolo fitted to it – Vacansoleil-DCM run a mix of Shimano and FSA.

As well as ‘moules’ there were oysters on the go; but with no Lea & Perrins sauce or Guinness – which are the traditional British accompaniments to the monarch of molluscs – we ‘passed.’ 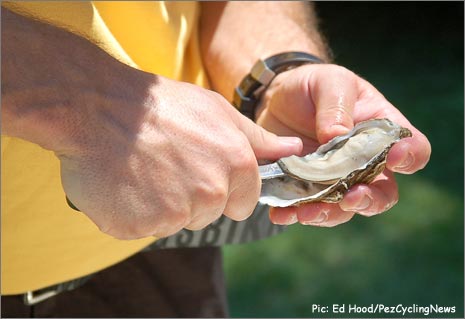 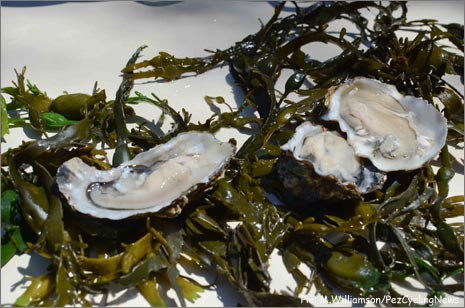 Recording the guests, sea creatures and general goings on was ace Dutch photographer, Wessel Van Keuk – whose work for Cor Vos you will be familiar with on PEZ. 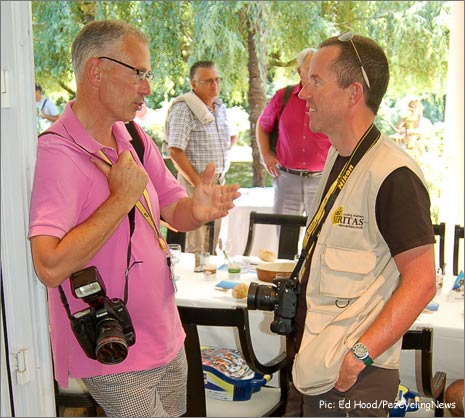 But amid the wining dining and schmoozing, PEZ had a job to do.
Johnny Hoogerland is the man who we all recognise for his aggressive riding and for that horror crash in last year’s Tour. 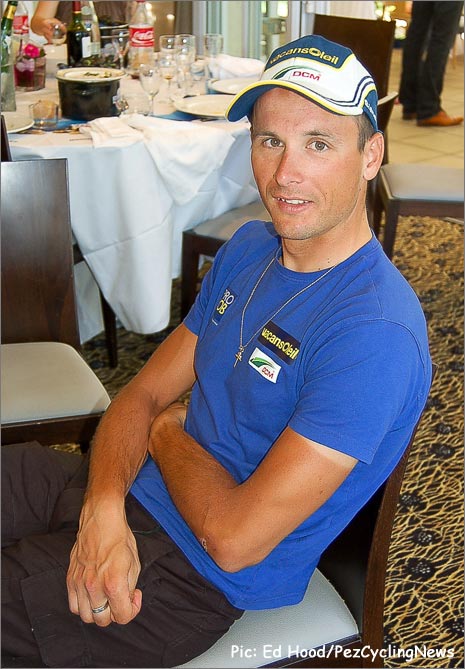 Johnny has spoken to PEZ a few times and was happy to chat – meanwhile, behind us, the ‘moules’ vat just kept on boiling. 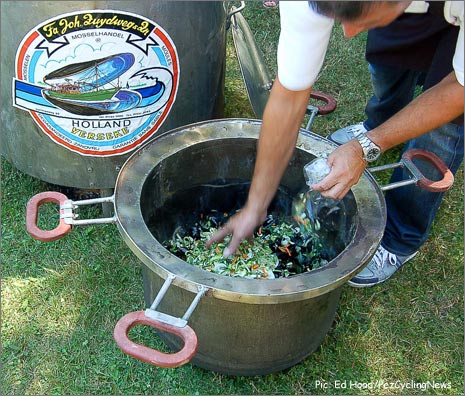 PEZ: You had a very strong start to the season, Johnny, including fifth on GC in Tirreno – you must have wintered well?

Johnny Hoogerland:: I actually did less than I did the previous winter, I started in December, usually it’s November, but I had a very heavy season and felt that I needed the rest.

PEZ: Were you happy with your run in to the Tour?

JH: I did the Classics; Amstel and Liege were goals but didn’t go as I would have liked.I rode the short Tours like Luxembourg and Suisse, plus in May we had a five day training camp here in France. We rode the Grand Colombier and the two Pyrenean stages – so yes, my preparation was good.

PEZ: Are you happy with your Tour, so far?

JH: Before the race I wanted to go for a stage; twice I’ve been in the breaks from which the winner came, however I’ve not been close victory. But are two beautiful days in the Pyrenees coming where I hope to be in the breakaways.

PEZ: Why do you think it’s been such a dangerous Tour?

JH: The Tour is always dangerous and it’s nothing to do with the parcours. It’s always nervous and everyone wants to be in the front – sprinters and GC guys, but they all want to bring their helpers and it becomes too crowded. When you touch a wheel at 70 kph you get a crash like you did on the Metz stage.

PEZ: Losing five of your team mates to injury must be hard on the head?

JH: For me personally it’s not a problem for morale, but yesterday, I could see that it was a beautiful breakaway but with us losing Kenny (Van Hummel), it makes things hard. And of course it’s not nice to start with nine then one by one see them dropping out. 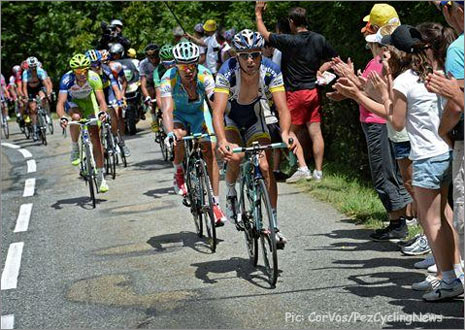 Johnny leads Vino et al on the road to La Toussuire on stage 11.

PEZ: Which has been the hardest day for you, so far?

JH: The Metz stage where we lost Wout, you get injuries if you’re a cyclist – but not like those Wout sustained. That was a really difficult stage for me.

PEZ: What about the incident with the tacks?

JH: I was at the rear of the big group so didn’t really know what was happening, I was confused but I didn’t puncture – but it’s not something you expect in a race, is it?

PEZ: What about the Wiggins/Froome situation?

JH: Froome has to work for Wiggins. I think they will be one and two on the Champs Elysees, there’s no one can beat them unless there’s a crash or injury.

PEZ: How is your legal case going regarding the big crash, last year in the Tour?

JH: It’s not something I think about on the race, but the fact that I’m being ignored isn’t nice, shows a lack of respect.

PEZ: Will you be riding many post-tour criteriums, as you did, last year?

JH: Not so many, I’m really motivated for the second part of the season but last year I did the Giro and then the Tour and then too many criteriums. They are very stressful, you get home late – I need rest and to train properly. I’ve still to decide if I’m going to ride the Vuelta or maybe some smaller stage races – we have a meeting about that, today.

The Tour of Britain is one I really like and there’s not so much time to recover between the Tour and Vuelta. And of course, I’m looking forward to the World Championships in Limburg; I know the course – and it’s very hard!

PEZ: And final question – do the mussels still come from your uncle’s farm and how is his business doing?

JH: Yes, from my uncle’s – and I think he’s doing OK if he can afford to sponsor this! 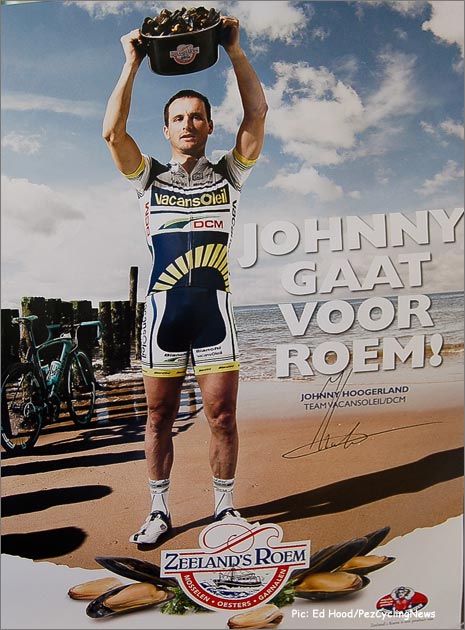 And just to remind us that we’re still on a bike race; Marco Marcato was buzzing away on the rollers – as he had been, since we arrived. 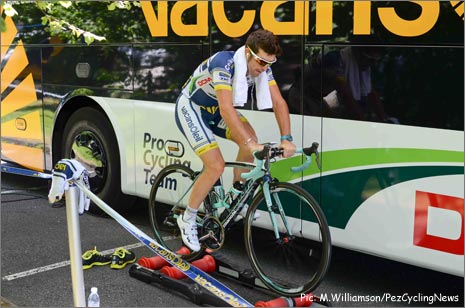 Pyrenees tomorrow; just two days left for Cadel, Jurgen and Vincenzo to bump the Wiggins/Froome tandem off the sprinter’s line.
We’ll be there on the Peyresourde to give you the inside line – a demain.