Roadside: The show begins again, in one of cycle sport’s most important towns. Every April, some of the hardest men in the bike racing game roll out of here for leg-snapping, out-and-back combat between Liиge and Bastogne. June is ending and it’s a sporting war once more. The hills and valleys around here have seen plenty of real battles, the roads will see friendlier duels this week. 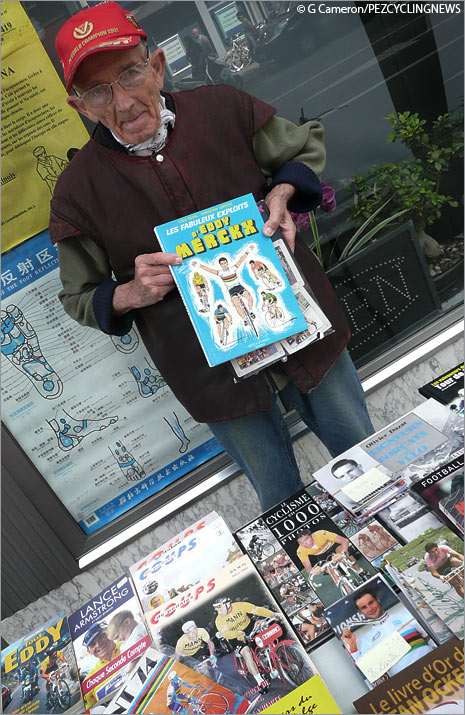 10.30am: Tucked in on the corner of Rue de Serbie, as the hustle and bustle of continental cafe culture hots up, this old fella was setting up shop. He looked as if he might just have seen all of the champions listed in his books racing in their prime. Maybe he even raced against them? Whatever, he had the stamina of his youth as he was still there at 6pm, with a cracking vintage Flandria tricot pulled on over his long-sleeved shirt. 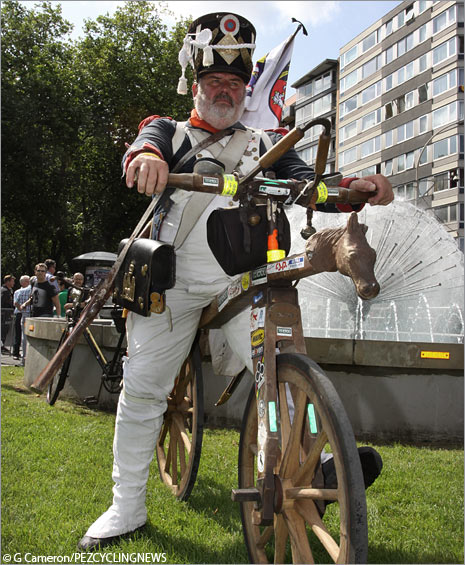 I’m debating the merits of risking the wrath of law enforcement and my girlfriend as the world’s most beautiful policewoman directs traffic across Boulevard d’Avroy. Self-preservation wins out, so you’ll all have to do with an old soldier on a vintage velo instead. 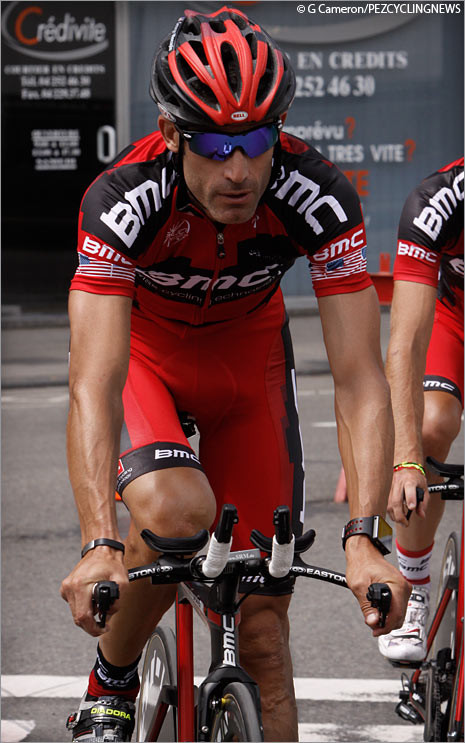 If you want to talk about battles won and lost, campaigns waged, great victories and few backward steps … this is your man. Fifteen Tours de France completed and one to go for George Hincapie. A winning pilot for Armstrong, Contador and Evans, he was trundling round the course with Tejay Van Garderen under his guidance today. 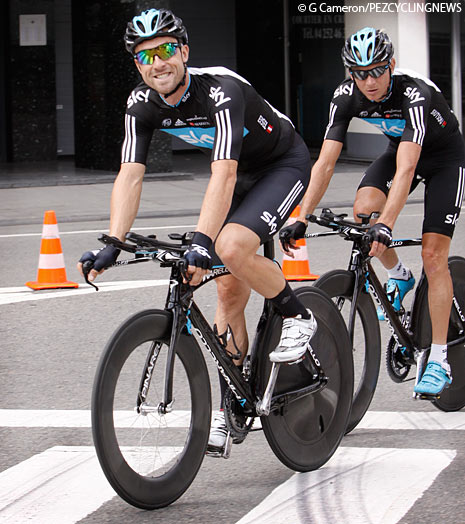 The atmosphere seemed pretty relaxed for the start of the Tour. With such a short course, the top guys shouldn’t lose too much to each other. It’s not like the havoc of the opening road stage last year which screwed up Contador. Bernie Eisel was in fine form as he tried to pick a line through the fans in the warm-up. 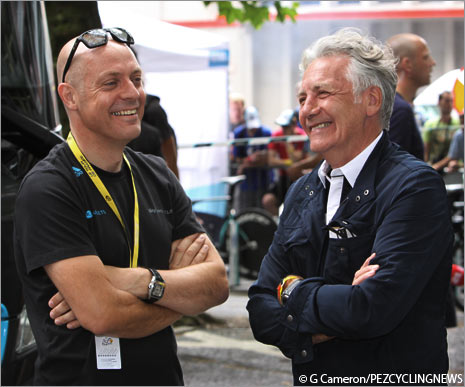 The Sky boss Dave Brailsford was also very chilled out: “In many respects, our job (as a management team) is done now. It’s over to the riders now … it’s not pleasant telling some of the guys that they hadn’t been selected, but in a sense it’s good that the decision was so tough for us to make.

Now it’s about helping the riders relax. It’s important from a staffing perspective that we do our jobs properly which is to be pillars of strength, so that the riders can concentrate on their race.” Brailsford certainly seemed to be enjoying himself, sharing a laugh with fashion designer Jeff Banks. 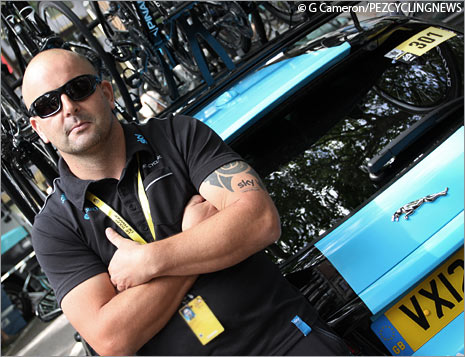 Also enjoying himself, as a Tour debutant, is Martin Ayres, the performance engineer in charge of Sky’s fleet of Jaguar cars. “It’s madness, but also really exciting! I’ve been looking forward to this since I did the Giro with them. We’ve just had a police escort through the traffic to get here!” (Martin’s blog on his Tour experiences is here: https://blogs.independent.co.uk/author/martinayres/) 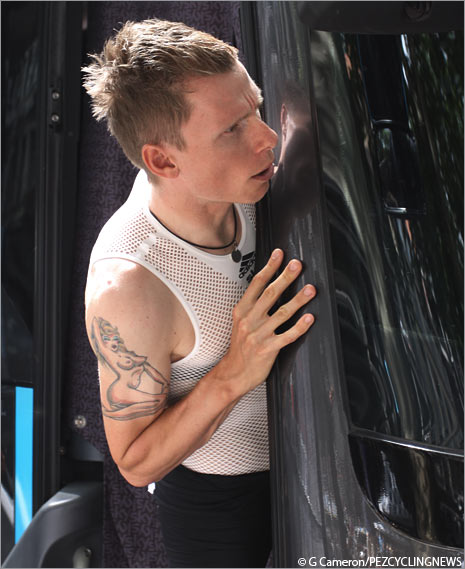 Mid-day: “Mama? Mama!” It’s nice to know that even hardened road veterans look for their mums sometimes. Christian Knees mother Rita has driven over from Germany to watch her son thunder down the start ramp. “It’s his seventh Tour. Mine too! But I can’t do the whole thing … I have to work at home!” 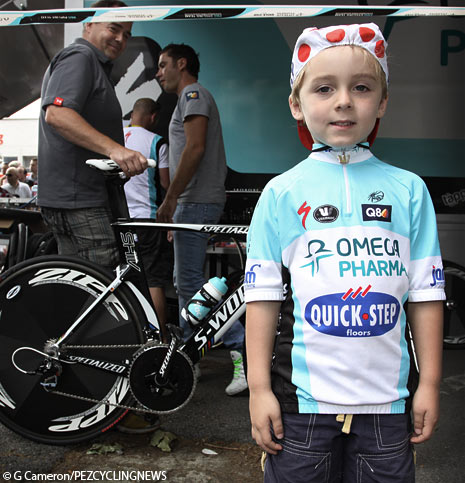 There might not be a genuine American contender for the overall, but there were plenty stars-and-stripes on show around the OmegaPharma-QuickStep bus where Levi Leipheimer is now ensconced. Maxwell’s dad is a Pez fan, and the little fella was proud to pose in front of reigning TT world champ Tony Martin. 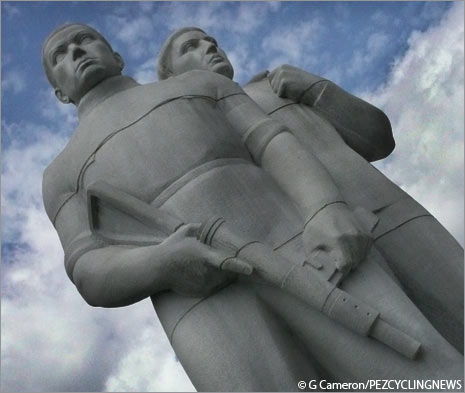 Just beside the Avenue Rogier sits a beautifully brutal reminder that if it wasn’t for past heroes, there’s a fair chance little of what we’re enjoying would be happening today. 17,000 members of the Belgian resistance lost their lives battling for liberty against the Nazis. Statues on either side of the Parc d’Avroy are a reminder of real sacrifice. 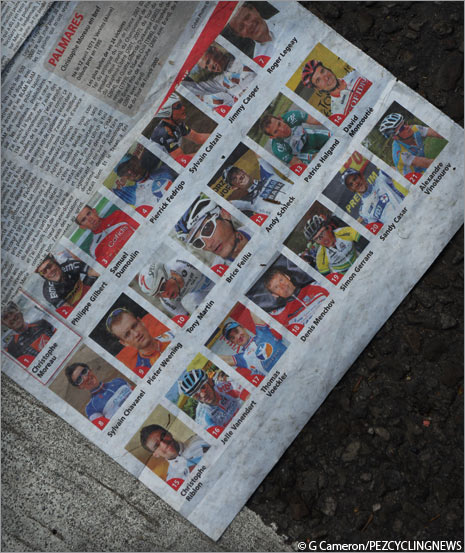 Of the thousands of papers given away on the Tour, more than a few will fall by the wayside. All that sporting effort turned into newsprint turned into detritus. 21 riders who had the joy of winning at least one stage of the Tour; 21 little photographs being trampled underfoot. 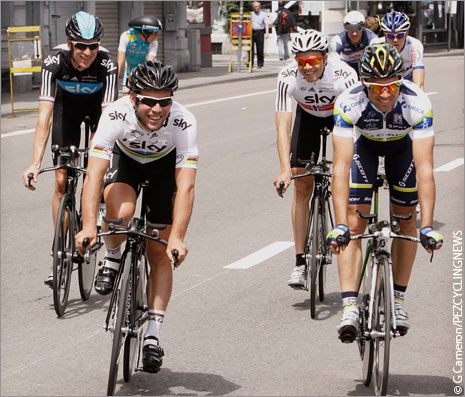 Less than two hours to the start; riders are rolling through in twos, threes and pre-race laughing groups. Not sure who cracked the joke, but everyone was laughing as Cav, EBH and Wiggo cruised by. The start and finish lines were separated by about 200 meters, and the team buses were right by the start, so … happy riders and managers. If you didn’t want to linger amongst the fans, escape was at hand. 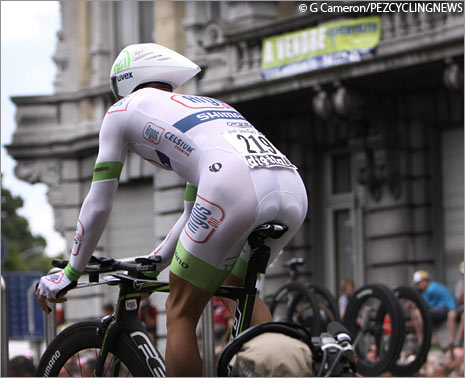 2pm: show time. Up the Avenue Rogier comes Tom Veelers, who will never forget the day he was the first starter in the Tour de France. Off comes the ice vest, precariously up into the start house, sign on, countdown … GO! 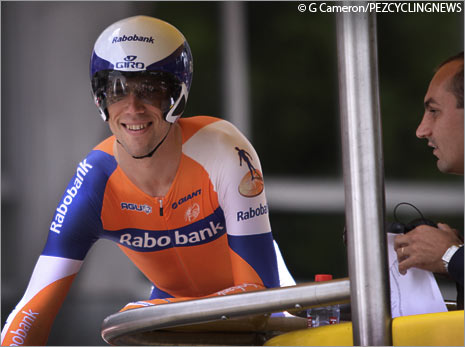 Rabobank veteran Martin Tjallingii is along shortly after, with his family right beside me at the ramp. A little blond boy chews on a waffle as he looks up at his papa, wonders why pap’s smiling back but then pedals away. 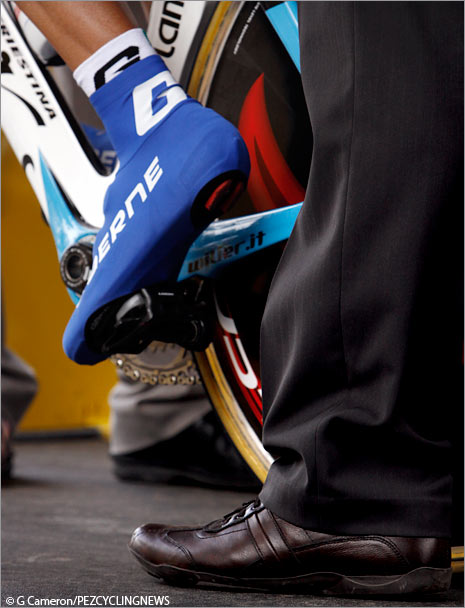 The most nervous man in the start house is the guy holding the riders’ saddles. The contrast in working footwear is pronounced; so are the instructions from Bernie Eisel who gives a stream of directions as the pips count down from thirty to twenty to ten to five to … GO! 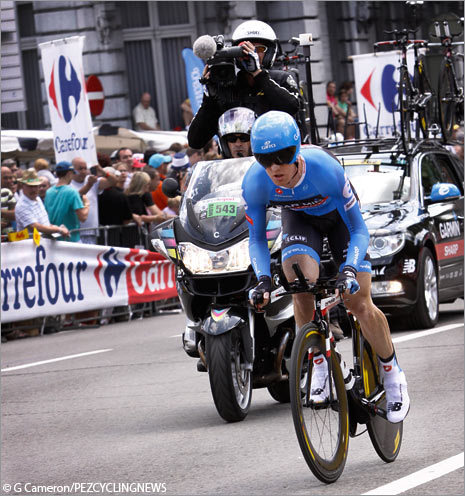 Tyler Farrar hasn’t had such a stellar 2012 yet, but he looked strong on the course and posted a satisfactory time so hopefully he’s on his way back to top results. 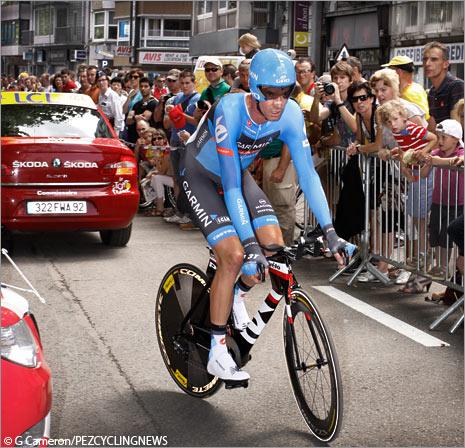 Also on the way back is David Millar, from his sickbed earlier this week to 16th today. And very nearly back in his sickbed but for a nifty bit of manoeuvring between two vehicles which should have known better. 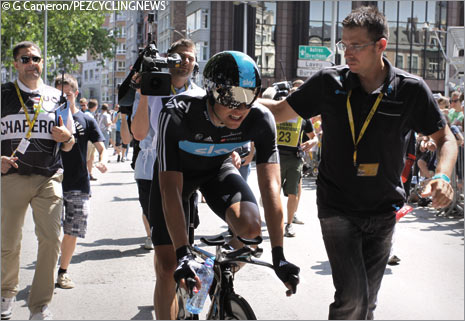 Edvald Boasson Hagen is the scout today, checking out the enemy tram lines, the bunkers and pot holes. It’s a blistering ride from the Norwegian who comes in fifth, and promptly reports all the intel back to base. 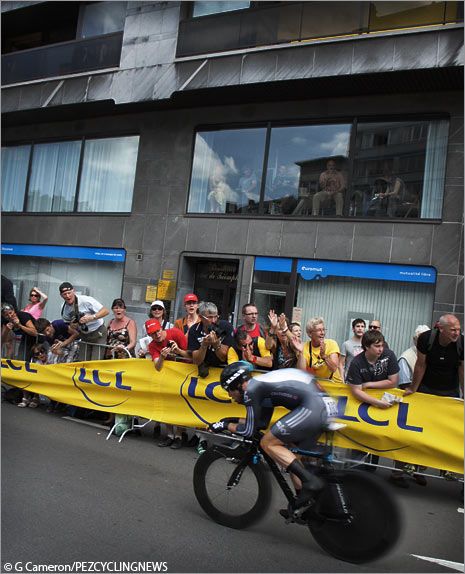 Just like in the Giro, Mark Cavendish caught out a lot of people because in regular Team Sky civilian clothing rather than world champion’s uniform. He blitzed out along the Boulevard d’Avroy and under the footbridge … hammering. There’s no-one else in sight down the road behind him; the spectators just haven’t reacted to the speed of his passing yet. 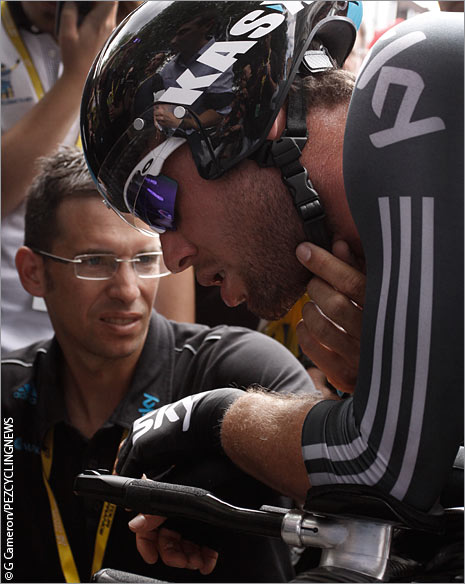 Moments later, he’s back down the other side of the Boulevard, and comes to a halt … wrecked. Dario Cioni leans in to unhook the helmet strap as Cav gasps for air. 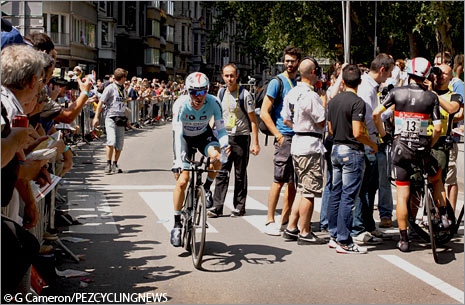 Dries Devenyns drifts by after Tony Gallopin finished for RadioShack and the fans are looking in all directions. Later, the biggest roar of the day is a swelling crescendo as Philippe Gilbert flew down the finishing straight and into ninth. Lord knows what it would have been like if he’d won. 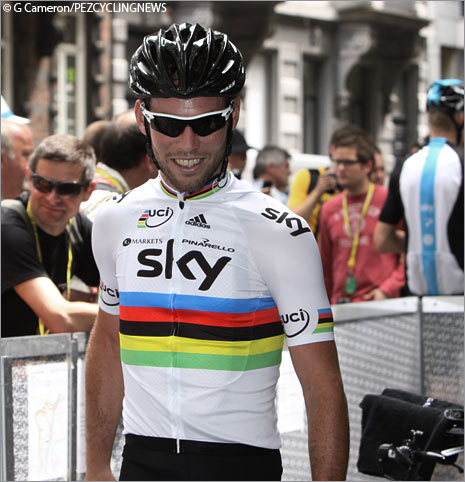 Cav’s girlfriend and daughter are here, so there’s a smile a mile wide once the day’s work is done. 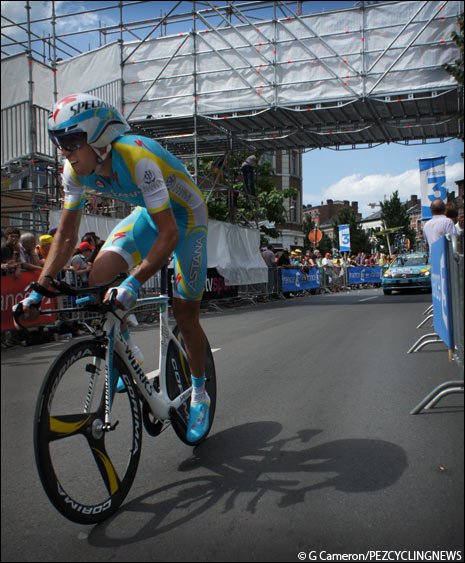 Robert Kiserlovski swung under the sea of humanity that I’d been swimming in on the pedestrian footbridge. The Croat cast a neat shadow but it was a cloudy performance, at 42 seconds back. 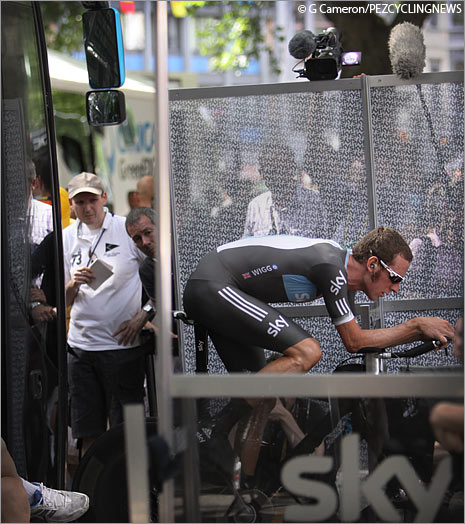 Team Sky have made their mistakes in PR and learnt lessons. There are no more tall screens to keep the fans’ eyes away. Wiggins had cameras clicking from every conceivable angle. 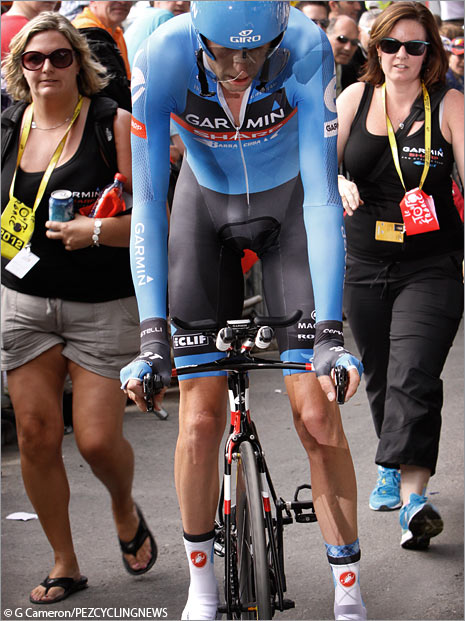 Canada’s Giro champ (doesn’t that sound nice?) Ryder Hesjedal was solid again as he came home one place ahead of team-mate Millar. Ryder looks skinny as … so it’ll interesting to see how he handles the next three weeks with that Grand Tour win in his legs. 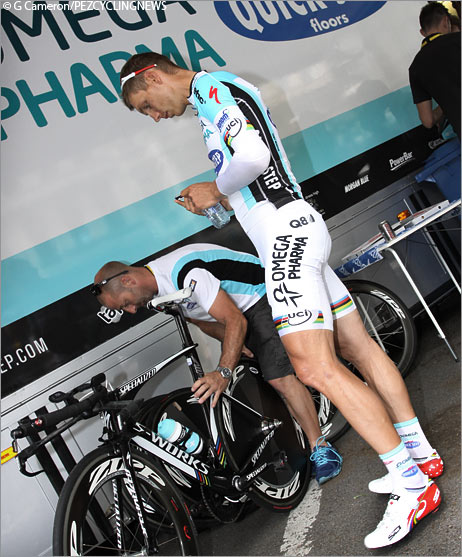 The world champ lost today’s skirmish to a puncture, but with two longer TTs to come there’s a chance to even the scores 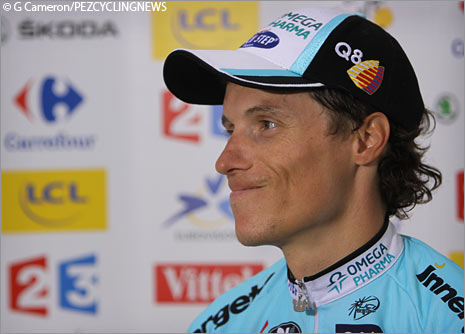 Looking like making the French fans very happy for a time, Sylvain Chavanel looked resigned to the inevitable as Wiggins tore towards the finish. Close, but … for Chavanel. 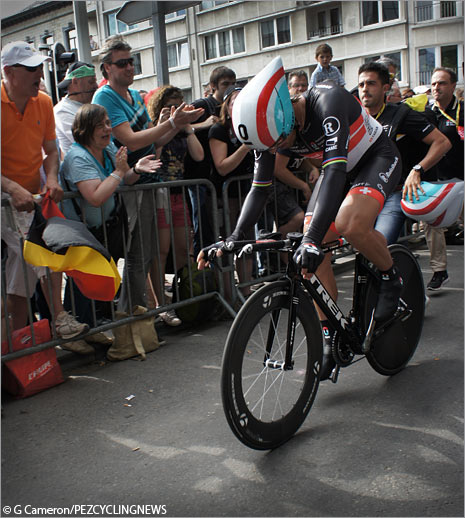 The Fabster is back! Just as good as in 2004, the Swiss knocked seven seconds off everyone else in less than seven kilometers to take the yellow jersey. 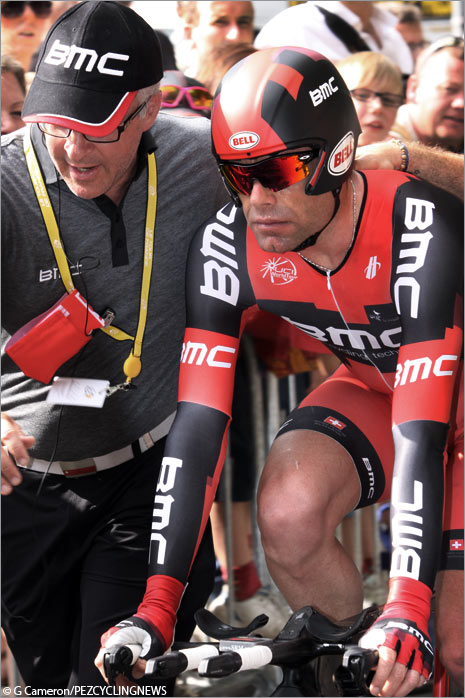 The defending champ did a pretty good job at starting his defence: ten seconds is nothing at this stage. 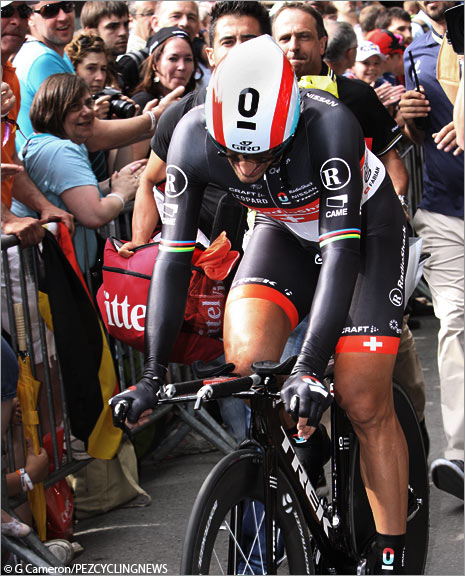 Cancellara’s back on top. It’s an uphill finish tomorrow in Seraing, so he could well hang on for at least another day.