Roadside St.4: The sun is blazing down on the Boulevard Vauban pretty much dead center in Abbeville. Cofidis and OmegaPharma-QuickStep are the first to set up shop in the square, but the riders stay safely hidden from view. No matter. We’ll get to speak to some of them to find out how the peloton is feeling after a nervous first day back on French soil. 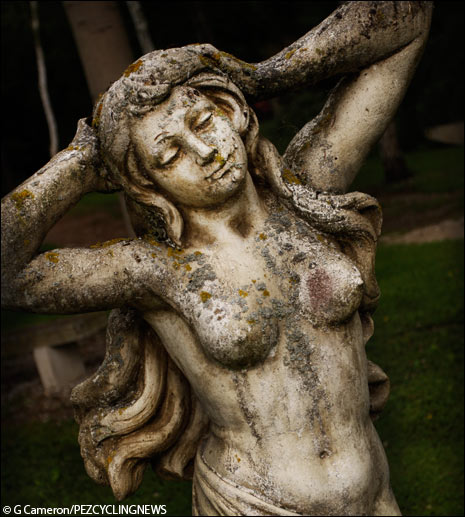 Just for Pez, we spotted this proto-Daily Distraction in the garden of our hotel before the off. Just something a little different to the regular feature! She resides in a fabulous jardin of fruits and vegetables, neatly kept grass, shady trees. 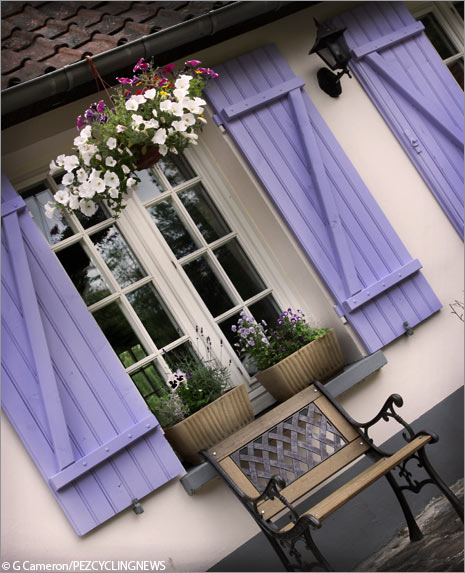 La Maison de l’Epousйe on Abbeville’s outskirts was an absolute cracker. Catherine, the hostess, and her husband ran a lovely little bed-and-breakfast, tucked just off the A16. No traffic noise, no neighbours. Perfect. Even better, they were only a couple of kilometers from the stage start. 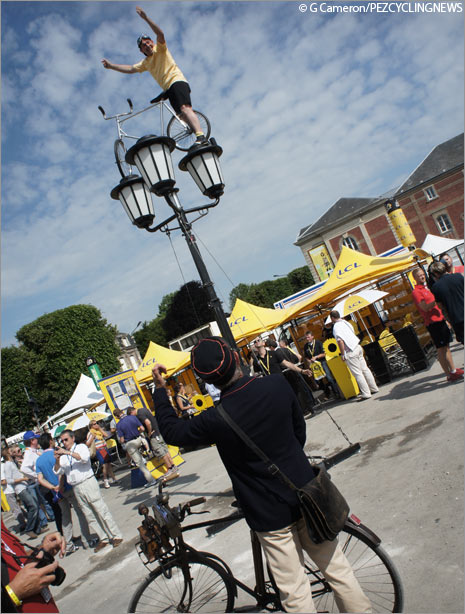 The Tour’s departure village performers gave the crowds a bit of a show. An old man beside me spent a good three minutes shuttling various family members in and out of his camera shot as life-or-death, or something like it, unfolded behind them. 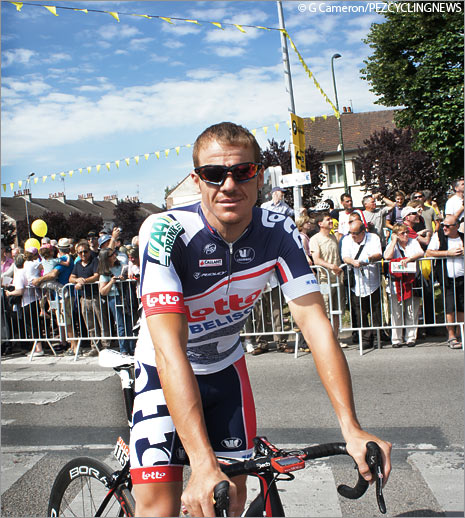 Lotto-Belisol are out of the blocks first today, maybe they mean business. I catch Adam Hansen on his return from the sign-on to find out how the first few days have been. “It’s looking good. Today should be a good day, it’ll be a real sprint finish. Not so tricky in the final, and not as hard as yesterday, so we’ll give it a go. 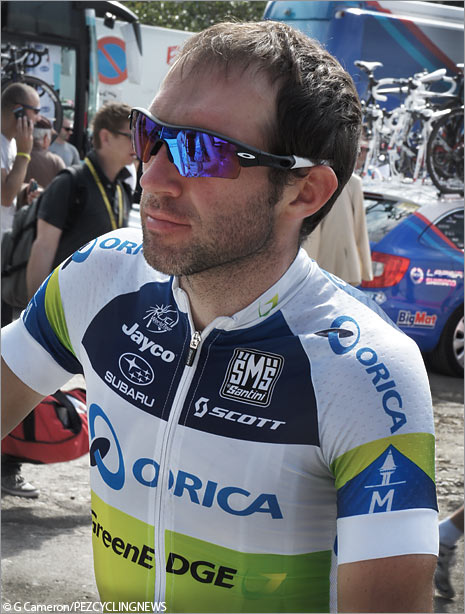 Orica-GreenEdge’s Michael Albasini has had a great year with numerous stage wins and an Olympic qualification sewn up long ago: “I’m quite happy with my Tour start. The first few stages we’ve always had somebody up there fighting for the win. I think we work well together as a team and if we keep doing this, sooner or later there will be success.

Can Goss win the green jersey? Has he more experience than Sagan to ?: “Why not? There’s a long way to go to Paris, so anything can happen … but, you know, Sagan is really young. He doesn’t care about experience!”

Can you win a stage yourself?: “I hope so! That’s the goal for the Tour.”

Albasini’s mate Daryl Impey is in the big show for the first time. As a Tour debutant, how are the nerves?: “It’s going alright. It’s been hectic. It’s a lot bigger than every other race I’ve ever done so there’s a lot of stress. As the race is going on, I’m starting to adapt to it, and guys are beginning to settle down in the group. Yesterday, as you saw, everyone was still nervous. I presume today should be a sprint day so it’ll be carnage again!

I’m quite nervous before the start. Usually I’m not but I think it’s just the hype around it. I try to treat it like every other race, but when you see the amount of fans running around, well, who knows how big it is!”

What will your responsibilities be in the race: “Every day’s looking after Gossy … we’re still looking at the green jersey. Although there’s quite a few points difference, Sagan could have a day where he misses out on points so we’re keeping that in mind and still fighting.” 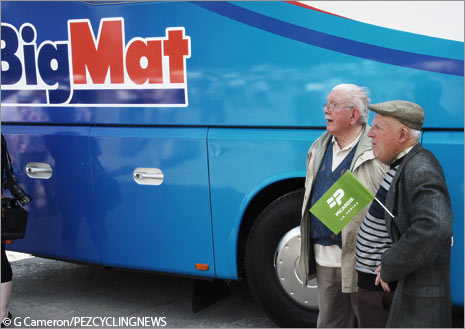 In the shade of the Rabobank bus, a couple of old pals shoot the breeze. I’m not sure how they could wear so many layers without collapsing, but maybe it has something to do with the jaunty angle they displayed their freebies at? 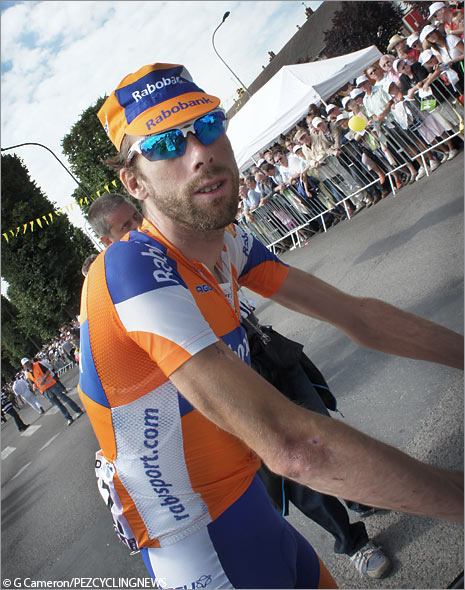 Rabobank’s Laurens Ten Dam knows all about bad days on the Tour.
“What do you think with all those crashes?! Of course, it was stressful. It was OK for me, because I got through, but there was a big disappointment for the team because Martin Tjallingii broke his hip. That was the worst thing of the day. But we still have three guys up there including Robert,so things are going really well. I have a support role so I’ll wait for the mountains.”

Your family was with you at the start … : “The start was just 20kms from my home, so it was good to have them with me. They’re home now, enjoying their holidays! My wife doesn’t bear to watch because of all the crashes. My little man is just two weeks old, so he’s not watching TV yet!” 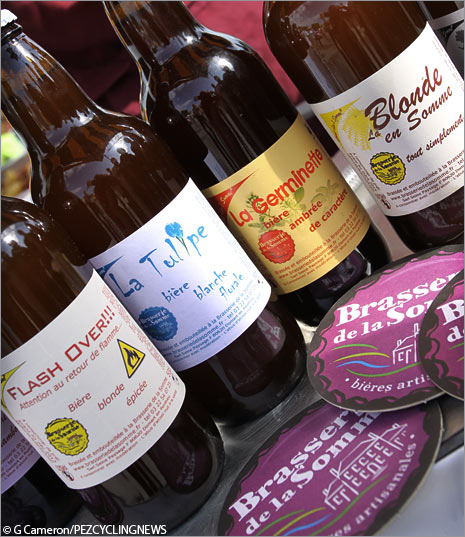 I take a stroll down to the village again, to get some shade and to knock back a couple of glasses of Picardie jus de pomme. None of this cracking looking stuff for me today, as I’ll be driving down to Rouen later, and there may be random breath tests in the offing. There’s a zero tolerance policy on alcohol now and no-one wants to take chances. 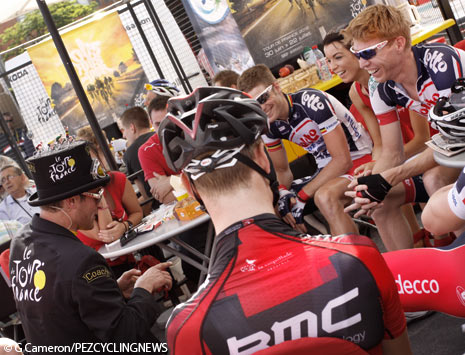 When you’re about to face 214 lumpy kilometers in the balmy heat, with a nervous bunch, a good few laughs are the best way to take your mind off the job. Being hassled for quotes by journalists isn’t the best preparation! 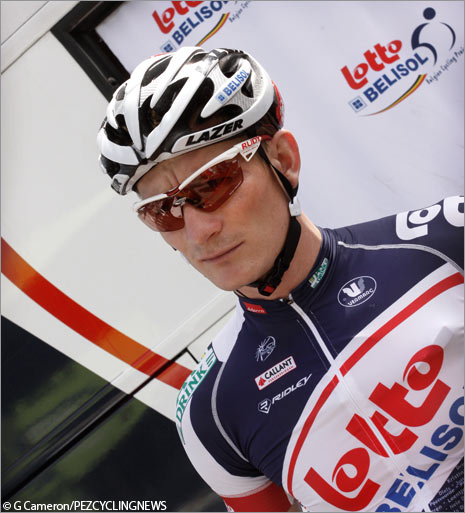 Andre Greipel was having some low-tech remedial work done on his helmet straps with a cigarette lighter when I spotted his pilot fish Marcel Sieberg rolling towards me: “I hope that we can have a sprint finish today, and we’ll try our best just like the second stage and we’ll see who’s first. We saw the first days that our sprint train is working really well.” Just then, Erik Zabel arrived in a Katusha team-car for a German sprinters’ love-in and Marcel was off down the road. Maybe he picked up a few more tips from the great one? 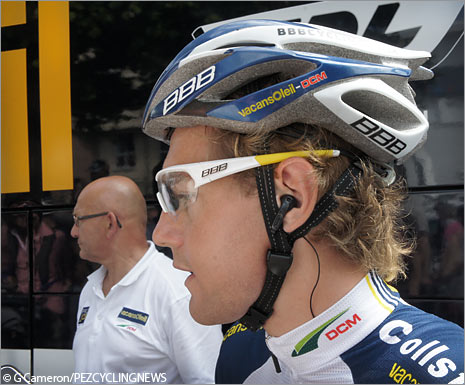 Holland’s Rob Ruijgh I starting his first tour for the Vacansoleil-DCM squad and was in the mood to chat, signing autographs as he rolled along the crowd barriers. “I’m doing OK so far. Yesterday there were a lot of crashes, but I think it was good for the team. I hope to get through the next few days with good feelings.

We hope we can do a good GC, but we have a few guys in the front of the GC right now – then’ll we’ll see in Paris. It’s also important to try and take a stage win … we’ll try to do that in the next few days.

The Tour is stressful, but I like that. That’s what the Tour is like! It’s the biggest experience of my racing career.” 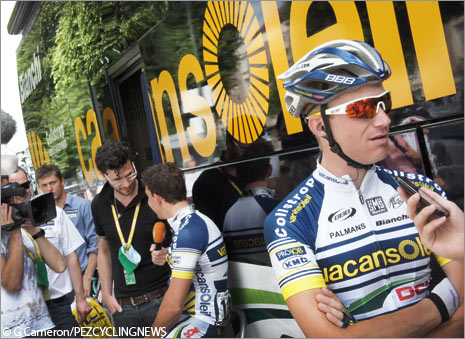 His elder, Lieuwe Westra, has come into himself in the last few seasons. Now the Tour is a real goal and ambition, but probably the GC will have to wait until next year. “Aaaah … before yesterday, it was good! But yesterday, 50 k’s from the finish, I crashed hard with a lot of people. Then I come back – good! But I go to the front then 30 k’s to go I crash for the second time and then it was over. I lost a lot of time.

I’m physically OK, but the overall classification …. phffft, it’s gone. Now, normally we’ll have three stages for sprinters so I’ll have a little recovery and then see in the mountains and the time trial.” 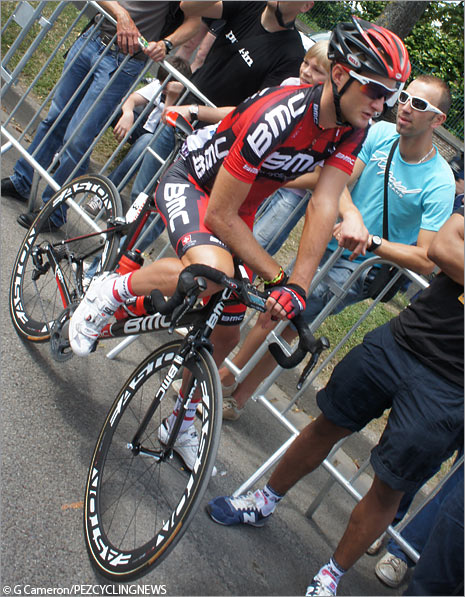 How is life treating ex-Discovery Channel pro Steve Cummings?: “Pretty good. We’re here to help Cadel and he’s where he should be, so it’s so far so good. Tejay is also going well so everyone’s happy. With the next few stages It’s just very stressful, very nervous. Everyone wants to be in front and the peloton’s just like a washing machine. You just have to try and stay calm, help the guys and keep them topped up with bottles as it’s going to be hot today.”

You must be pretty thrilled to be selected to such a strong Tour title-defending team?: “Yeah, I think especially after everything that’s happened this year, being injured a lot … it’s been difficult, but to get picked is great.” 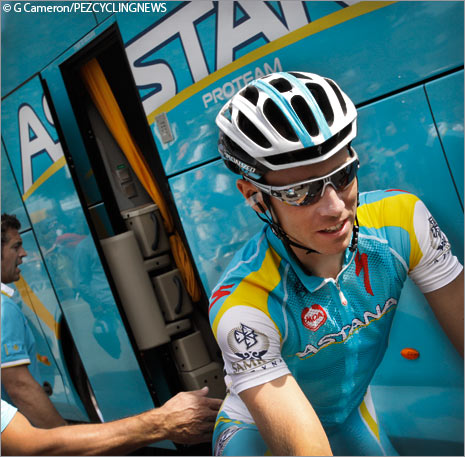 This time last year, Astana’s Fredrik Kessiakoff was taking out his frustration at missing the Tour de France on the mountains of the Tour of Austria which led from stage two to the end. Instead of defending that title, he’s at the Tour. Is he proud?

“It’s a good feeling. It’s one of those things that you have to accomplish as a rider. You have to be here, and I’ve done it. It’s proof that you’re a real pro, you know, so I’m happy to be here.

I wanted to get that hard day after a couple of days sitting in the bunch and also now another tow or three days where I can save my energy. Yesterday was a good day just to get a hard ride through.” 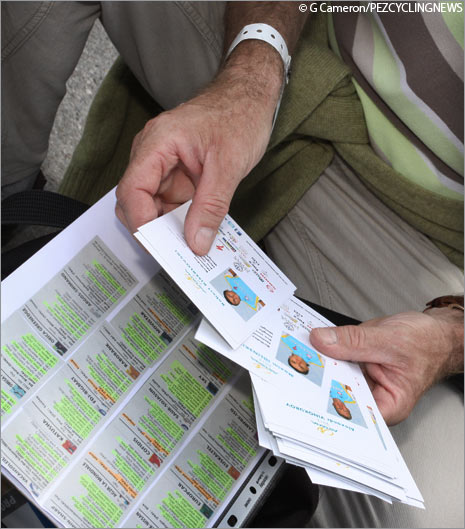 As Fredrik coasts away, one of the seemingly scores of middle-aged men who roam the cycling world with ring-binder folders of rider cards is busy checking his Astana successes of the day. Don’t think he got Fredrik! Sorry about that! 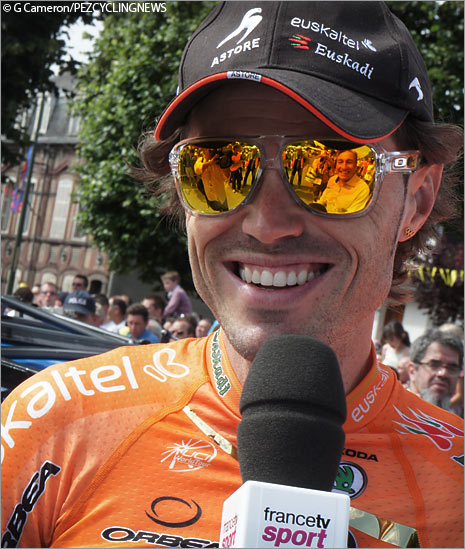 The Olympics Games are just around the corner. They might not be a big deal in pro racing, but Sammy Sanchez is making the most of his remaining time as a defending champ. The Euskaltel star just looks the epitome of cool; with a rock star smile, he manages to pull off the oversized shades and gold-flashed kit! 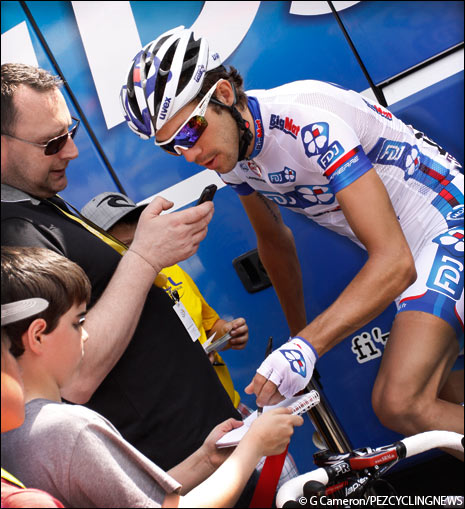 One little boy at the barrier spends about 45 excruciating seconds trying to get Francis De Greef’s attention as the lanky Belgian fiddles with his radio, checks his saddle, does up his shirt. Eventually, he turns, takes the pen and flourishes a signature on the little guy’s book. Ecstasy. With FDJ, it was a much more simple process! 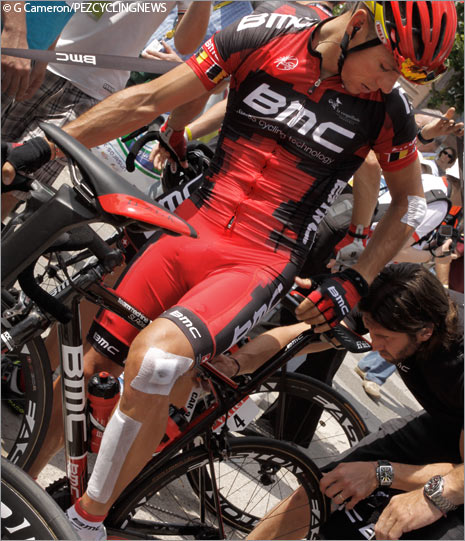 Covered in bandages after only three stages is not how you want your first week to be going on the Tour! Philippe Gilbert has the consolation of knowing that he got his ovation at home in Liиge, and that the next few days can let him recover. 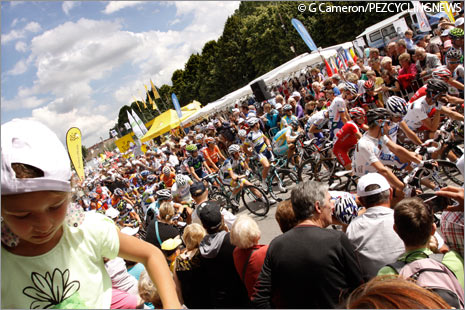 The bell for the on-course cars has long since sounded, and the flag is about to drop. Last minute adjustments on the line. A wave from Cadel, Greipel kisses the necklace charm he wears, signs of the cross. 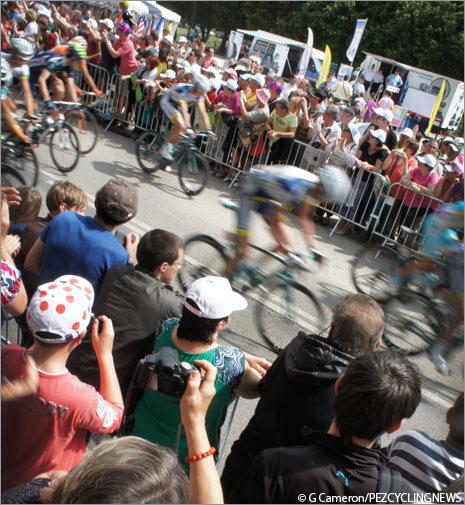 The riders whizz away and do a 180 turn at the end of the boulevard. The fans tear-arse it down a side street to see them as they shoot by in the other direction seconds later. Time for us to get the air-con on … it’s a long drive ahead.