Roadside Stage 9: Besanзon is famous for being a number of things: UNESCO world heritage site, birthplace of Victor Hugo, home to the citadel of Vauban. It’s also reputed to be ‘the heart and soul of watchmaking’, which makes the city the ideal host for a Tour time trial.

Due to travel arrangements, we couldn’t stay until the end of the day. The clock was ticking a little too fast for us. We didn’t see Wiggins turn up to smash everybody including Cancellara. But in a lot of ways, for us the day was about how the fifty-five minutes or so passed for some of the less well-known names. It was also about the incredibly casual affair such a stage was. 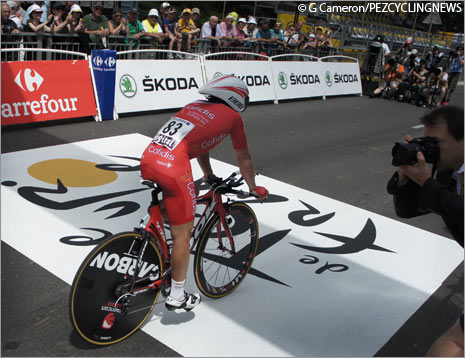 Aside from the VIP spaces adjacent to the finishing line, we miraculously had pretty much unrestricted access today. I don’t really understand how that worked but I’m not complaining. We ambled through the technical zone, round the back of the arrivйe. Riders were finishing in varying states of apparent effort. And onve they’d got their breath back, it was so easy to talk to them. 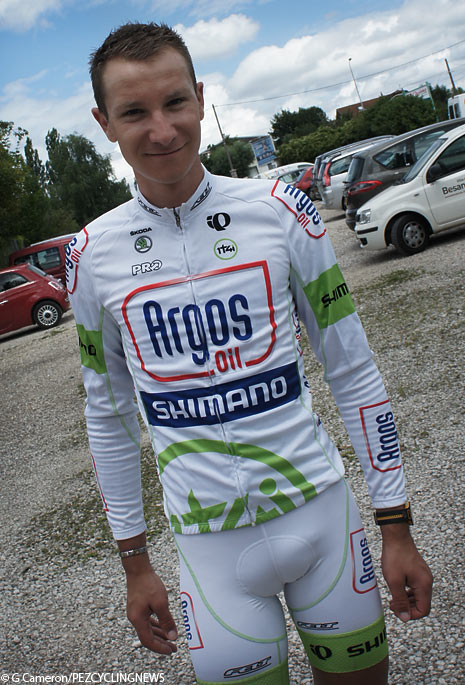 We’d had a bit of a drive down from Mulhouse, but we were in time to see most of the earlier starters coming in, some in better shape than others. One who was satisified with his morning’s work was Argos-Shimano’s young German rider Patrick Gretsch. How did he feel out there?

“Yeah, it was a hot, challenging course. Like usual, I suffered a lot, like always in a TT. But I felt pretty good and I’m really satisfied with my ride and I hope it’s a good result at the end.”

Now a rest day to recuperate a bit …?
“I think it’s important for everybody to have the rest day. It’s always a weird kind of feeling to restart the next stage after a rest day but I think everybody is happy to rest. Tomorrow, I guess I’ll do a maximum two hours to recover. But it’s also important to clear your head, to go for a coffee with your team-mates.” 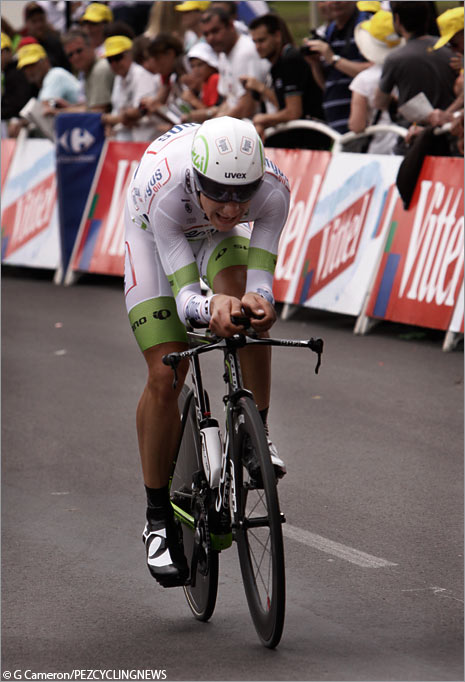 “The Tour is the biggest thing I ever saw. Last year, I did my first Grand Tour – the Giro. But you can’t compare the Tour with any other race. It’s crazy! So many spectators, everything is so big, so much interest from the media. When you are a young rider it’s always a dream to do the Tour de France and when you do it, it’s amazing.” 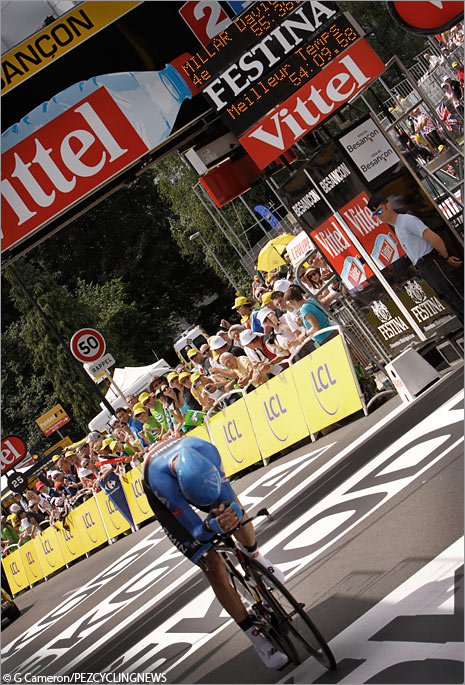 Scotland’s David Millar had a lot of support and crossed the line for fourth best as things stood, before being chased down for interviews. It was a pretty good result considering this spring’s injury problems. 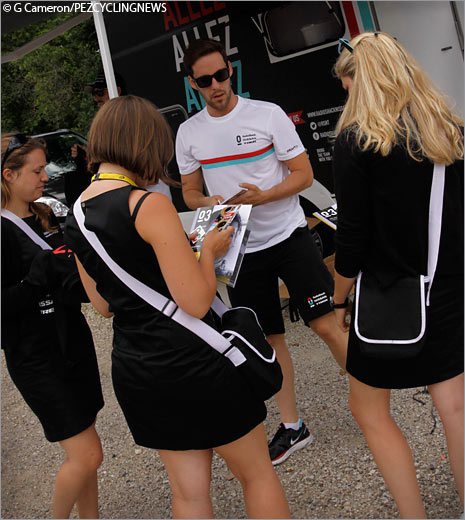 RadioShack-Nissan-Trek were embarking on a major publicity drive handing out what looked like a publicity caravan-sized consignment of tee-shirts, stickers and magazines. Every man, woman and child in the town had an ‘Allez, Allez, Allez’ logo in team colors. 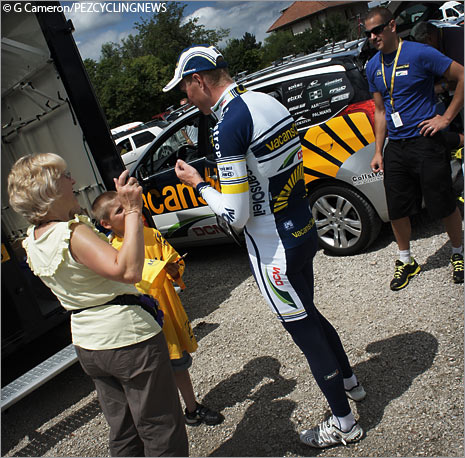 Vacansoleil’s Lieuwe Westra had knocked his team-mate Gustav Larsson out of top spot with his 54’09”, but Tony Martin had bettered that when we caught up with Lieuwe, who was on autograph duty.

“Yeah, it was a very hard parcours with the climbs at the end. In the beginning the feeling was not so good, but in the second part it was better so I think it was a good race for me. Last week, I crashed three times and I was a little bit worried about the feeling … but I lose thirty seconds on Tony Martin so I’m happy. For me it was very important to stay in the Tour, and I have nothing broken!”

Then Lieuwe briefly joined in with a soccer kick-about with Dutch TV, launching the ball miles over everyone’s heads to great amusement. 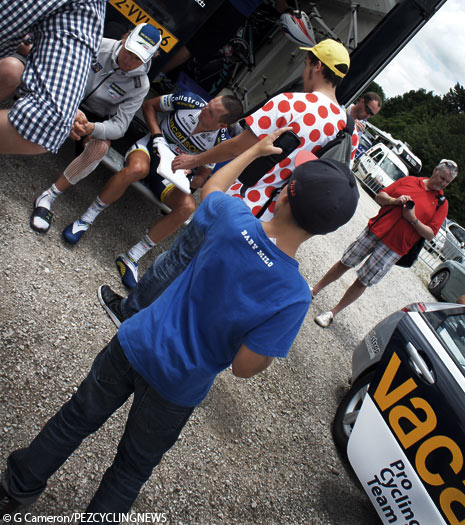 Lieuwe’s team-mate Johnny Hoogerland rolled back to the Vacansoleil camper van pretty much unmolested by fans and sat on the step for a drink. Neither Vacansoleil, Argos-Shimano or FDJ were in the fenced off area and people were just ambling back and forth unable to believe they could get so close. 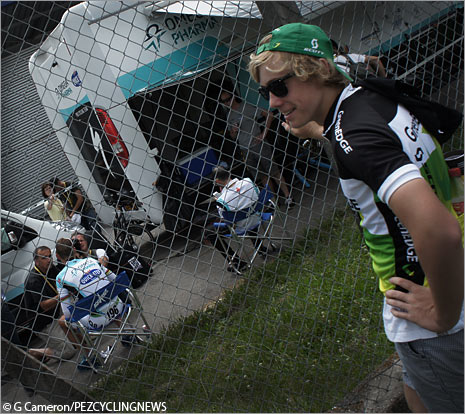 On the other side of the road, OmegaPharma-QuickStep had set their bus up to avoid press contact. It just meant that the riders had their backs to the fans pressed against the fence. Credit to Tony Martin – even with a broken hand, he set a benckmark time and then came over toe sign autographs. The mark of a champion. 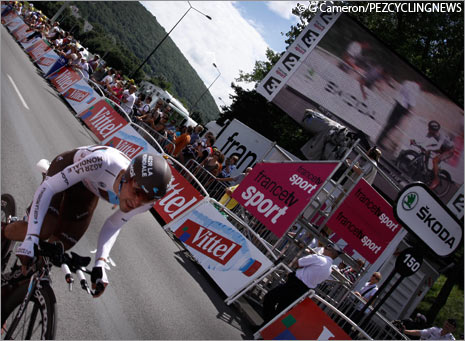 Up on the big screens, the action was playing out. Fans could keep up to date with everything, including the French TV commercials earlier in the day, and build up to a frenzy when any French riders were coming through. Christophe Riblon got a massive ovation when his turn in the spotlight rolled round. 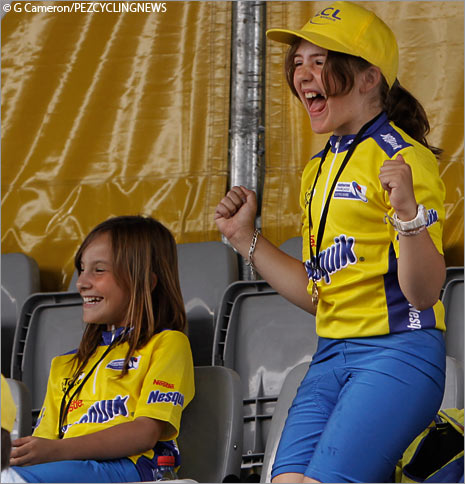 Up at the finish line, the spectators’ stand was gradually filling up. Most of the noise seemed to be coming from one person. Small, but with a mighty set of lungs. It was like a switch going off: quiet and serene/manic and hollering/quiet and serene with every rider’s arrival. 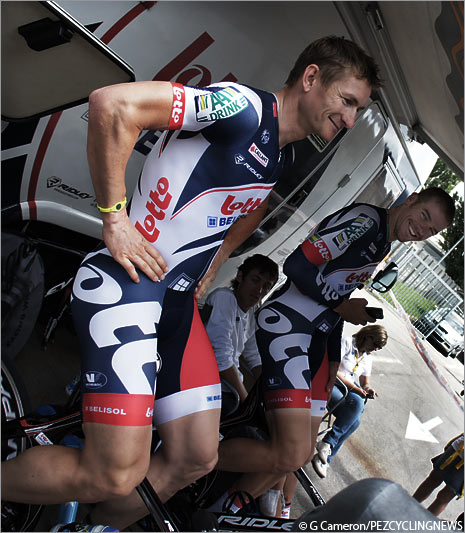 Since Marcel Kittel dropped out last week, Andre Greipel didn’t have to do too much to reclaim his crown as my favorite lantern-jawed German sprinter. You know what they say about photographers with big lenses? They can’t take photos when you’re next to them. 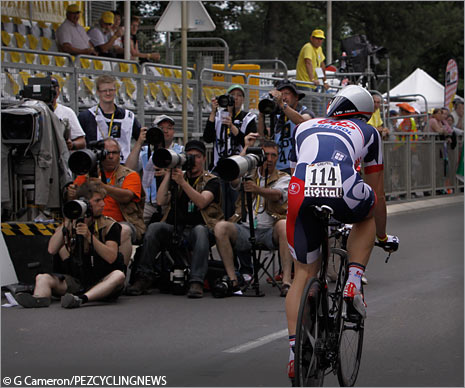 The TT didn’t seem to be too much of a drag for either Greipel or his team-mate Adam Hansen. Two sprint wins in the bag – the Tour’s already been a huge success for Lotto-Belisol. 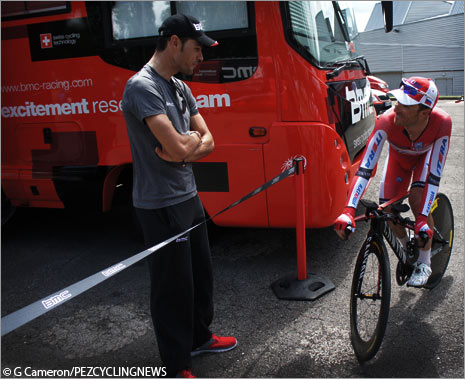 Another early finisher, Manuel Quinziato, was shoting the breeze with fellow Italian Luca Paolini when I spoke to him. Here was his take on the Tour’s week one.

“Well, you know we are title defenders so there is some pressure but I’ve never seen Cadel as calm as (he is) this year. I think that’s because he’s pretty confident. Last year, he knew the team was here for him 100% and I think this year we probably have a stronger team. We are confident we are going 100% so there is no reason to be stressed.”

In terms of the first week, there were a lot of accidents. Was it difficult to stay out of trouble?
“Yeah, it wasn’t easy but at the end it was about not spending energy. We had a really strong team for the flat, a lot of Classic riders, and our job was to bring Cadel to the end of the first week completely safe. We managed it. Maybe we were a bit lucky, but the better you race, the luckier you are.”

How was the TT for you?
“The first climb is after ten or fifteen kilometers … it’s hard because if you look at the time, it’s just 41 kilometers, but at the end the time will be closer to that for a fifty kilometers course so it’s a hard one.” 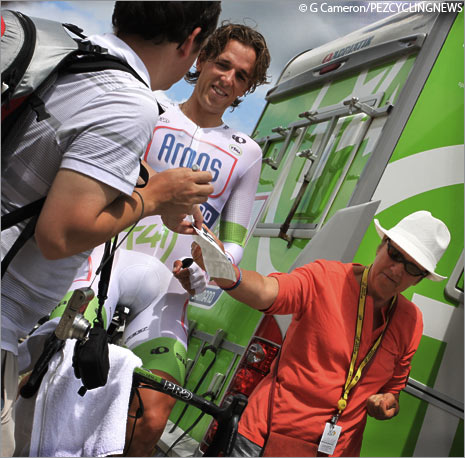 Dutch Aussie (or Aussie Dutch?) Koen de Kort safely navigated the TT. During a very amiable warm-down ride with fans casually wandering over to chat, he even had his own safety pin roadie to remove his race number. Autographed, and handed over with a smile. de Kort is the sort of rider that every team needs: he understands both his job when he’s racing and his public responsibilities. A top guy. 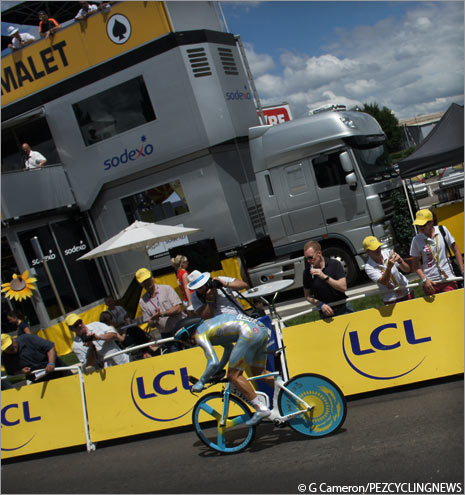 Assuming he stays upright, this was definitely, positively, the penultimate Tour de France TT for Vinokourov. The Kazakh isn’t the guy he once was on the bike, but he’s still got fight. Just a shame the VIPs seemed like they were on lunch-break when he went by. 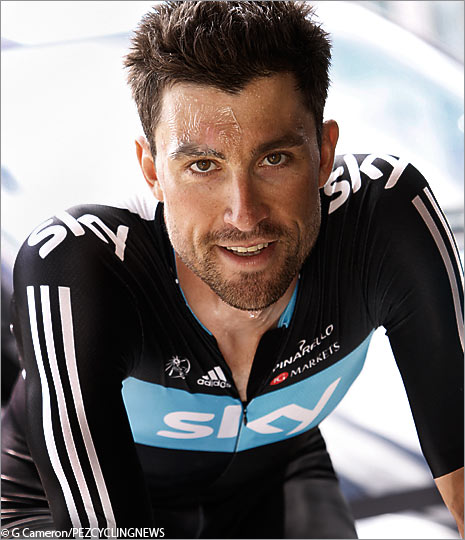 I had a quick word with Bernie Eisel as he warmed down … did he have to pay extra attention to the course today so he could feed back info to Wiggins and Froome?

“Nah, not at all! They know the day already, they did the recon so they know what they have to do, they know how many watts they have to sit on. I just had to sit on and at a certain point, when it started to hurt too much, I was like: “I’ll go a bit easier!”

So it was just a steady day?
“Yeah, not killing myself, but you still have to go pretty deep. But you should never kill yourself if you’re not able to win this thing.”

Could anyone get time cut today?
“Nah! The time cut is 25% so Westra did 54 minutes? The best guy is going to be 52 minutes, so with 52 minutes, you’ll have more than 12 minutes (before you get time cut). You can walk around the circuit! If you get eliminated today … you just didn’t really get the feeling of riding. If you go easy and you have a puncture or a crash, then you can be in trouble.”

How are you feeling after last week’s tumble?
“I’m healing up really well, but I’ve got wounds all over my body. Everyday, I’m finding new spots that I didn’t know I had wounds on! I’m a bit stiff when I get up in the morning and move around, but I’m getting there.”

Things must be great within the team?
“Of course! We defended yellow yesterday in one of the hardest stages in this year’s Tour. Everyone was fresh and waiting for that day. Everybody attacked each other. I saw riders attacking their own shadows! And dropping them. Really! I’m pretty sure that Jensie (Voigt) dropped his own shadow once, then came back, just to see!! I was not even able to stand up any more and people kept attacking. I just sat up … it was a hard day but a good day.” 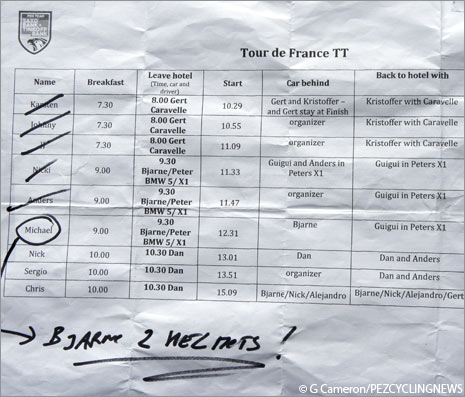 The logistics of such a TT have to be well-thought out. The course runs south-north (more or less) for 41 kilometers. The off-course route is 40 kilometers back south, and that’s the way the race is heading after the rest day. So, how do you ensure the riders get ride support and then are taken to the hotel quickly and aren’t left sitting on their arses too long? This is how SaxoBank-TinkoffBank did it. 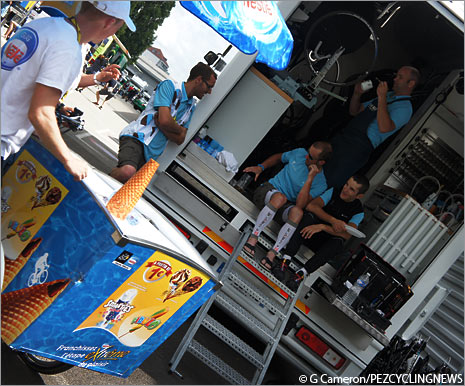 You couldn’t blame her for trying but the Tour’s official icecream seller had no luck at the Ag2r lorry. It wouldn’t be the done thing to get melted mint choc chip on your compression shorts. 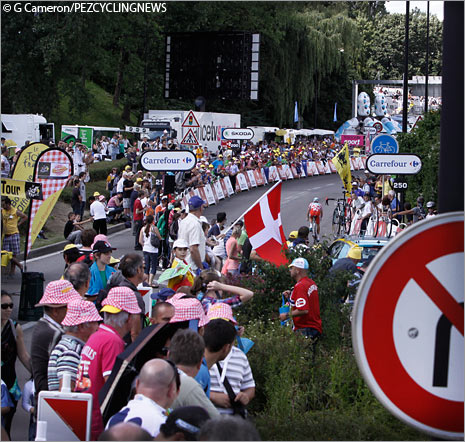 To say goodbye to the Tour, we took a quick dash down to the last big corner with 350 meters to go. The polka dots of Fredrik Kessiakoff got through safely and zipped up the finishing straight. 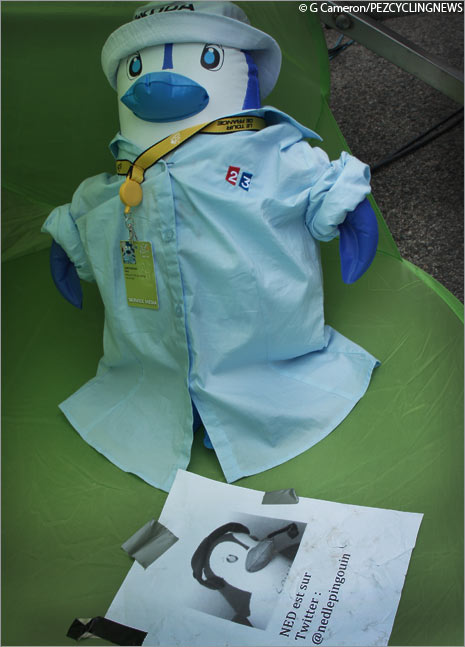 On the way out, we made friends with the best-accredited penguin in the western world, press pass hanging round his neck. If he can get to such lofty places as the Tour, then maybe that’s why we were on an even footing today.

Toolbox: So Many Questions