Roadside: There’s a hell of a row going on outside our hotel window tonight, in one of Liиge’s less prepossessing hinterlands. The descendants of all those Italian mineworkers and factory men, those who went bonkers when Nibali was off the front in Liиge-Bastogne-Liиge in April, are tearing up the streets. Even in the heartlands of cycling, other events sometimes take precedence!

Yeah, Mario Balotelli, the brooding child-man of inestimable footballing talent and spectacularly questionable temperament, has blasted the Squadra Azzuri into the final of soccer’s Euro 2012 championships. Carloads of flag-waving, anthem-singing Italo-Belgian youth are screaming up and down the street, not even bothering to look at what’s on offer in the window of the ‘Madrigal’ a few doors down. Maybe once the race starts on Saturday they’ll have a new preoccupation?

They will if Nibali can win the big one, after coming so close in LBL, undone by Maxim Iglinsky in the closing kilometers. Once we’d picked up our credentials, it was straight off to the Liquigas-Cannondale press conference … to read the body language as much as listen to the answers, to see Nibali’s future.

The boss Roberto Amadio hails a complete squad that just ain’t Nibali, Basso, Sagan + six. There are guys like Daniel Oss, Alessandro Vanotti … strong, hard men capable of a lot in their own right. Amadio has Sagan on his left, in centre-stage. Basso is next, Nibali is on the end.

Sagan looks super cool, with white shades almost floating like a halo on his head. Basso looks hard, a face set tough with razor cheekbones and blade-like jaw. He looks better than he did at the Giro! Nibali looks a bit sullen, bored but determined.

The first question is for Nibali. Basso reaches out for the microphone, flicks the cord loose, hands it to Nibali. Will this level of co-operation continue? When questions come in English, Basso gives Nibali the gist of them before the official translator gets a chance. Most of the questions reference Sky and Bradley Wiggins; Nibali pads them back gracefully. He grips the mic like the second best MC in a rhyming contest.

They share a few jokes – Nibali the punchliner, Basso the laugh. If Basso does what he says he will and works hard, Nibali’s got to be up there in Paris, no? 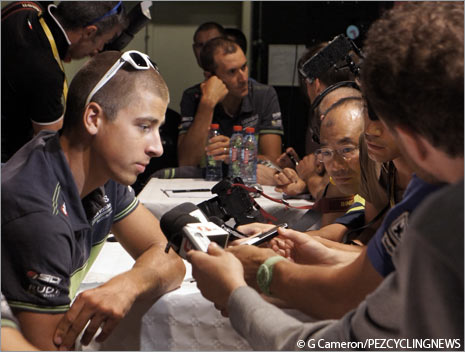 Sagan has been silent. Amadio reaches out and gives him an avuncular neck-rub. The Slovak sensation leans in with a smile. He still lacks the weight of pressure, maybe doesn’t realize yet just how good he could be. He switches from ‘miles away’ to singularly focused when the questions come, fixing his gaze on the journalist.

There’s a very pricey elephant in the room, you can’t forget. Nibali looks like he’s offski next year, to Astana, or maybe even BMC – so it wouldn’t do not to reference Evans in any discussion of the podium.

The official press conference breaks up. Basso signs autographs, Nibali fields a question or two … but it’s Sagan who gets the attention. He’s got double the journos around him compared to Basso and Nibali combined. Interesting … is the smart money going on a stage one win in Seraing and a possible yellow jersey for him?

Liquigas go, OmegaPharma-QuickStep arrive. The riders climb the steep steps to the conference room, down and up again, like miserable geriatrics. Surely there must have been another way in? 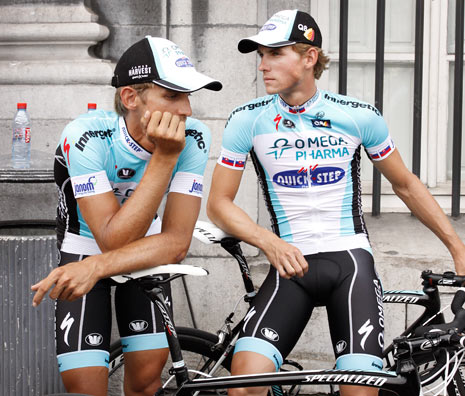 Outside, an autograph hunter bravely makes a stab at which Velits twin is which as he pulls out his fan cards. To be honest, I’ve no idea if he got the right brother, but he looked happy enough.

It’s roasting this afternoon. The teams’ presentation is next up, and I’m strongly advised by the ASO crew that driving there is a very bad idea. It’ll be a traffic nightmare, so we go to wait for the shuttle bus for the ride to Place Saint Lambert.

I overhear a lovely soundbite – paraphrasing, we’re welcome to get out of the sun and into the bus, but as the bus is f*cking boiling, that’s also a very bad idea. 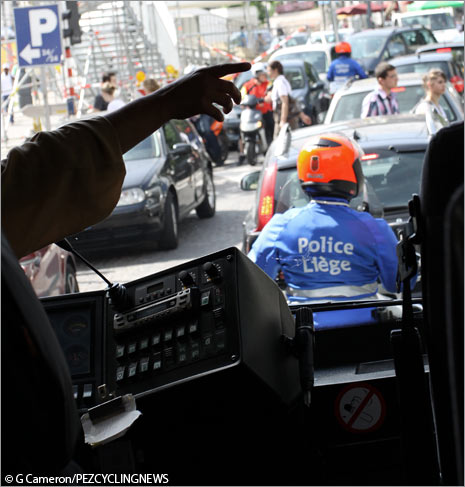 It’s a school outing for journos and photographers, sitting cheek-by-jowl on the navette. We’ve got a police escort and immediately plough straight through a red light. Everyone waves out of the bus at the cooked, cranky commuters lined up at the junction.

Down alongside the dirty brown Meuse, and thunder into town. The motorcycle outriders practising their stunts, overtaking with the narrowest of margins, cruising one-handed.

Disembark and it’s over 30 Celsius. We’re melting as the sun scorches the Place Saint Lambert. A guy with a Tilff-Bastogne-Tilff medal round his neck hands Valerie a flower. Welcome to Liиge! 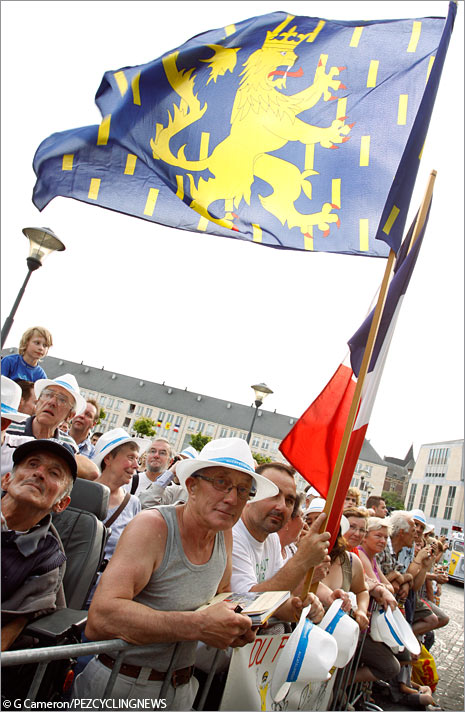 The band is warming up, but they’re already checked into the “’Otel Californ-yah”. The fans are starting to congregate. The officials become more numerous. We duck across the road, smile at the security guard and we’re into a courtyard in the municipal building along from the stage. It’s beautiful: ornate, cobbled, and cool. Vaulted cloisters surround the square. 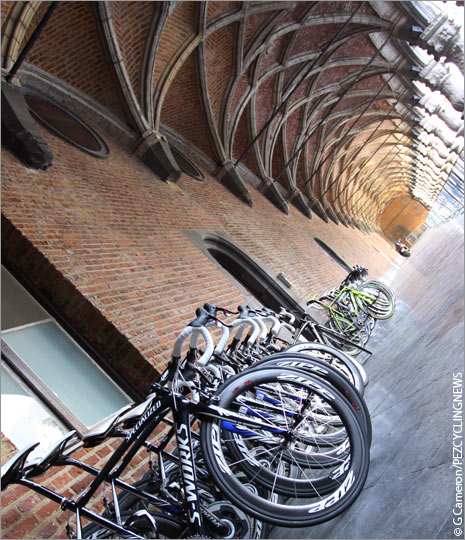 Lined up along the walls are a few hundred thousand Euros worth of top-end racing bikes. If the single currency does go down the pan, we could do worse than flog a few of these machines to plug the gap. 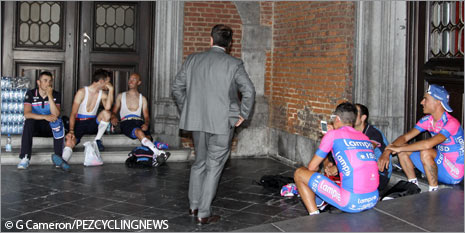 Everyone seems to be in a good mood. I chat with Davide Vigano, recovering from a few bashed-up ribs at the Tour of Switzerland. The Lampre man is smiling and ready for a few big weeks, working with Danilo Hondo to set Petacchi up in the sprints. His colleagues work on their outfits for the night.

Last year, Andre Greipel out-dragged Cavendish for a sprint stage win. With a terrific lead-out crew in 2012, he’ll fancy his chances. How would you like Hansen, Sieberg, Roelandts, Henderson and co. to pull you to the finish line? 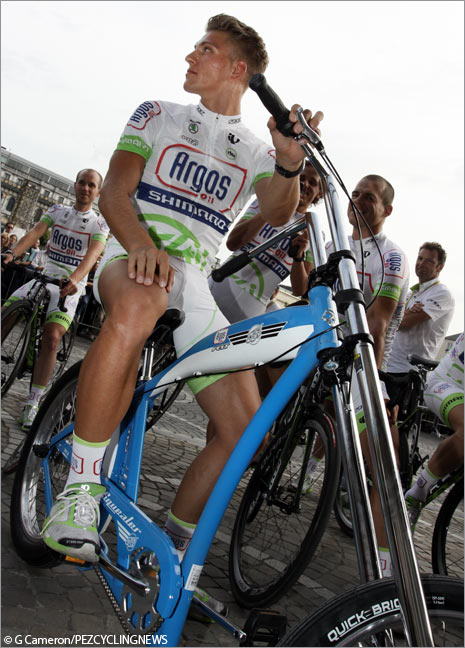 There’s another German blonde sprinter on the block these days, one who’s already a name. Marcel Kittel did his team’s PR no harm by heading off for the presentation on a very cool, but not-so-practical Felt cruiser. He even needed a shove to get him back up the cobbled slope backstage. 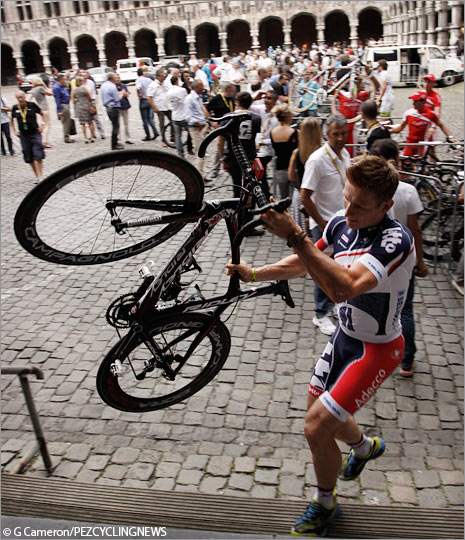 The elder German is not messing about once his stint in public is done. He practically hurls his bike up the steps and is gone. 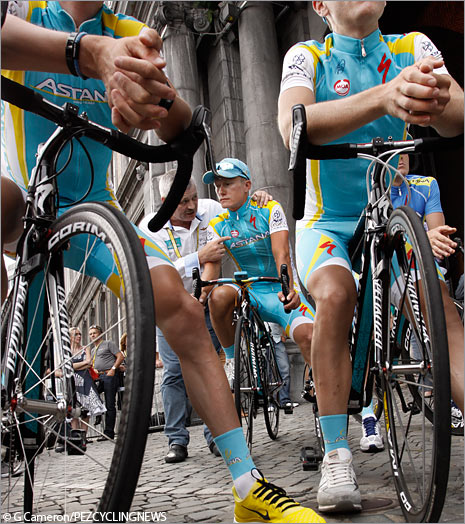 The generation of the late ’70s or so is moving out of the limelight. Tucked behind the front line of Astana talent headed by Jani Brajkovic lurks Vino, still the guiding hand of the team even if he might not quite have the legs these days. Bans and injuries have taken their toll, and he gets a hug and words of encouragement he’s probably heard a million times already. 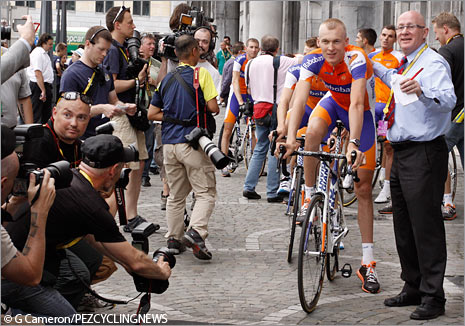 Robert Gesink took the Tour of California in May, but this Tour might not suit him so well. Too many time-trialing kilometers. Still, he looked in great form, joking with Steven Kruisjwijk on the stage. 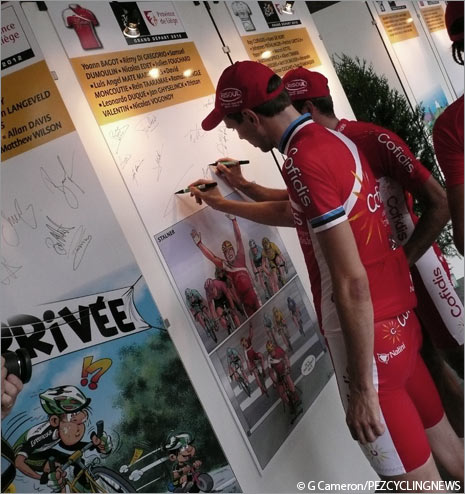 There’s a little girl who is in complete control of the black Sharpie pens backstage. I wouldn’t mess with her, even if she was only about seven. Rein Taaramae and his Cofidis buddies were carefully marshalled to sign their names to the boards, and then hand the pens back. 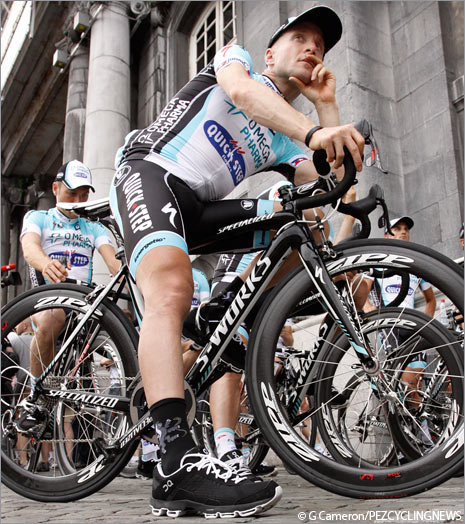 American hopes for the overall probably still lie with Levi Leipheimer; tonight was just one of those things you’ve got to get through as a rider, and Levi looked like it couldn’t have ended fast enough. 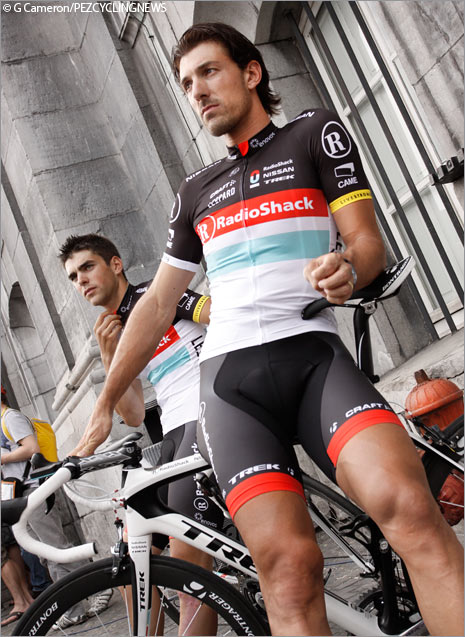 The Fabster will fancy his chances of another prologue win on Saturday, eight years on from thrashing everyone the last time the Tour started here in Liиge. He was his usual self, but don’t try this at home. His eyes alighted on a water hydrant: “Come on, guys! We have to make fire!” 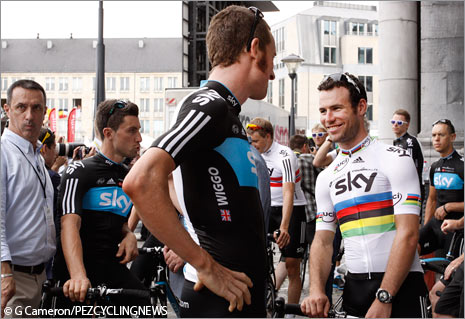 Team Sky take the stage. Directeur sportif Sean Yates looking like he played on it with a metal band back in the day. Wiggins faces a long barrage from Tour ‘speaker’ Daniel Mangeas: “Yeah, uhhh, yeah ….” The crowd laughs heartily as the Brit dissects the question. 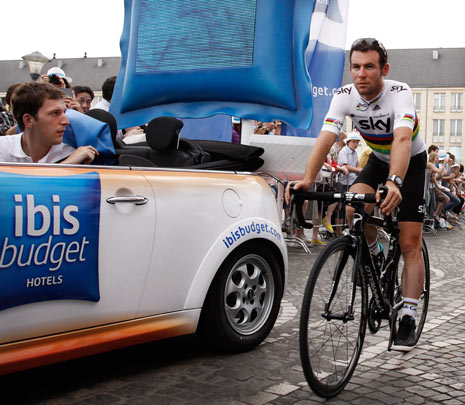 Behind Phillipe Gilbert, the biggest roar of the evening goes to the World Champion Mark Cavendish. It’s nice, still a little surprising, just how his character has grabbed hold of people. 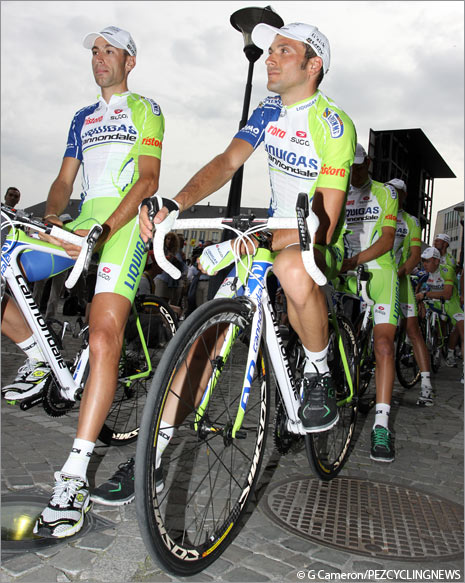 The Nibali/Basso double-act rolls from press center to team presentation and it still looks as if everyone is on message. The elder Italian, even with his not-spotless past, gets a terrific roar … but then Liиge is a bit of a home crowd anyway. 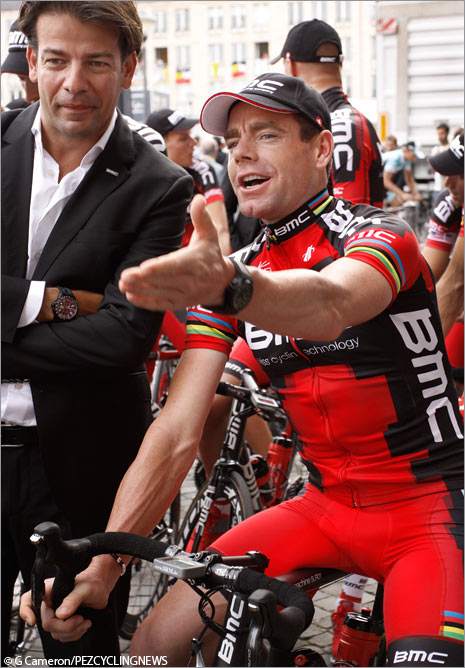 The best way to distract yourself from the tedium/waiting around of a team presentation is to ask someone about their t-shirt. Defending champ Cadel Evans spots a French journo in a fabulous ‘historic jerseys’ tunic and asks him where he got it. 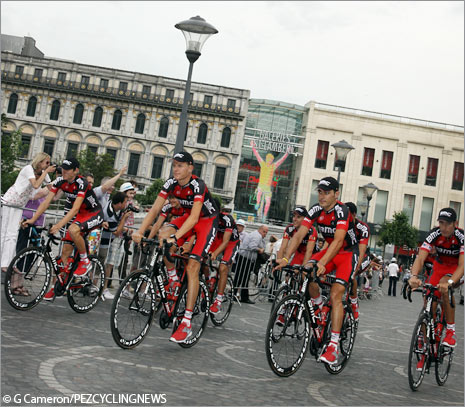 With his BMC squad completing their parade lap in the shadow of a giant mural, maybe we should be asking ourselves a … a yellow jersey, a Champion? If not Nibali, or Wiggins, maybe Evans again this year?

A Name To Remember: Joe Dombrowski