Roadside St.5: After a hectic week on the Tour it was high time we had a jour touristique so we took the opportunity to explore a region of France we’ve never properly experienced before. In the process, we made our own little pilgrimage in tribute to one of cycling’s most famous figures, a son of Normandy.

He was a guy who felt he never got the praise he deserved during his lifetime. Given the number mentions of his name today, it’s more likely that you never miss things until they are gone. Jacques Anquetil was a one-off, capable of wild partying and staggering performances, often within the same 24-hour time frame. 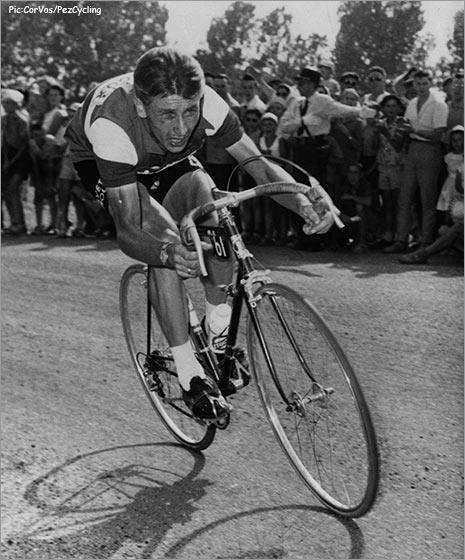 Jacques Anquetil was the first five-time winner of the Tour de France, a precocious time triallist who shot to fame when he won the Grand Prix de Nations in 1953. He wasn’t even out of his teens then and was blasting past riders who had started over a quarter-of-an-hour ahead of him.

After what was the stage start in Abbeville yesterday, we opted off the route of the stage and looped south-west and gently inland. There were a couple of stops on the itinerary and we had all day to do it. 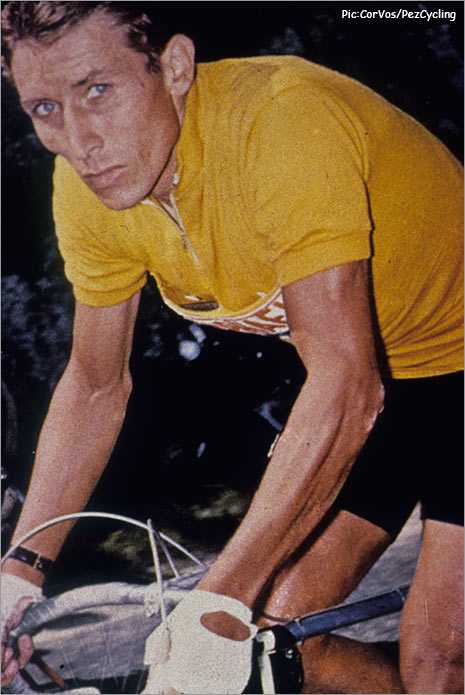 Off down the A28, we made for the little town of Quincampoix, where Anquetil spent the bulk of his youth. He’d moved there as a kid from his original home in Mont-Saint-Aignan which sits in the north-west of the city of Rouen itself. The family then moved to Bois-Guillame a couple of miles away before the war changed the course of their lives.

Anquetil’s papa was in the construction trade, and decided that taking on work for the occupying forces was neither ethical nor healthy. With work and money getting scarce, in 1941 they moved again to Quincampoix, a little further out of Rouen. His father took up agriculture. It’s what Jacques aspired to probably. He always seemed to have a hankering for the outdoors. It’s what he turned to, more as a hobby than anything else, after he hung up his bike for good. 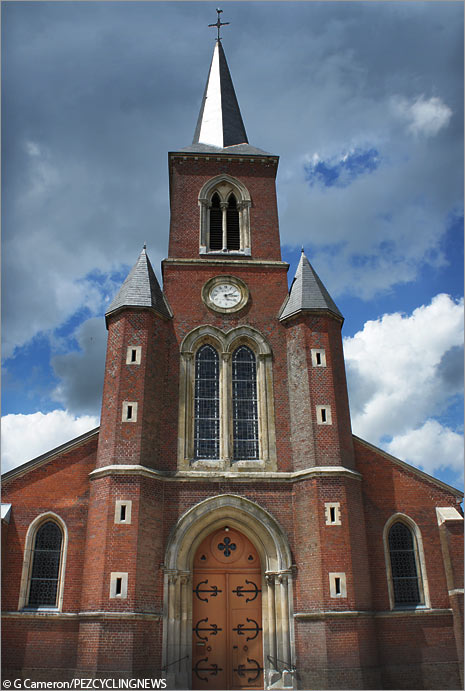 The church spire is visible from a long way out. The D928 slopes into town and the building – as you’d expect – is the central architectural presence. We stretch our legs after the drive. A grandmother is out walking her grandkids; I ask if she knows where the Anquetils had their family home. She scowls. Jacques is in the cemetery now, she says. She points back along the road. 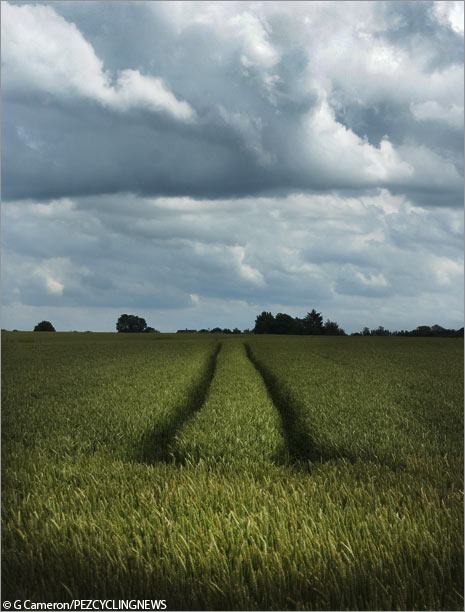 The soon-to-be-great Jacques grew up in an area of farms, rolling open fields, orchards. A very natural setting. As I walk and drive around, I can see that even with such obvious natural ability, the terrain here is a pretty good place to hone your skills, to work on your technique, to develop that fluidity and style that mean some experts still think Anquetil was the greatest time-trial rider of all time. 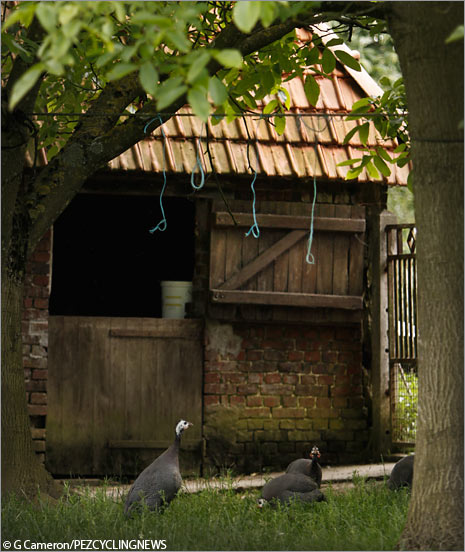 Today, Quincampoix looks a bit like a town on the rise; there are cute shops on the main drag and a lot of money has come in judging by the size and dйcor of the houses. It’s relatively close to the coast so within easy reach of wealth from the south-east of England steaming across on the Channel ferries or through the tunnel. We saw a lot of British cars, and what looked like a lot of holiday homes in the area. 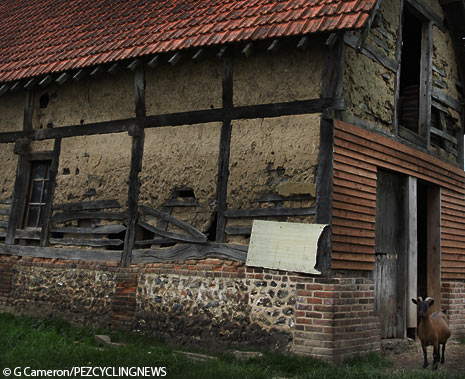 Of the main route, it still has an artisinal feel though; goats and cows stroll around on small family lots. Decrepit barns and sheds are held together with string, canvas, tape and prayer.

We’d arrived at lunch-time and not much was happening. A housewife sat reading a novel. Two kids pedalled furiously past on little bikes. The post office was open but no-one was sending anything. We wandered around taking photographs. Cars slowed to watch us; we’ve got Tour stickers on our auto so everyone knew why we were there. 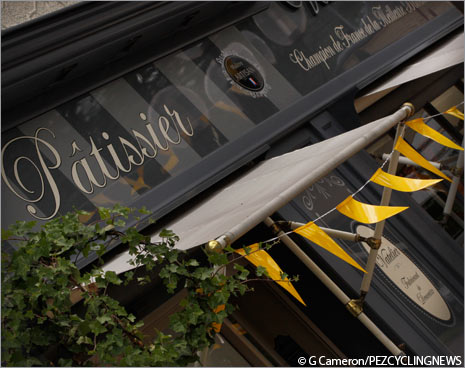 Yellow bunting flutters and cracks in the air when the sun slips behind clouds and the wind rushes through. The supermarket is asleep. The butcher has put away his apron and cleaver for a while. 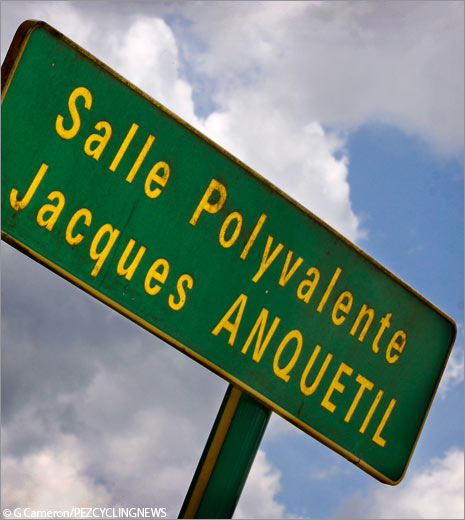 The Jacques Anquetil sports hall is probably not worth your time if you’re planning a trip. It’s as impressive as a small-town venue can be. There’s an irony that such a building should seek to inspire good health in the youth (especially) when it’s honouree was such a legendary party-animal and acknowledged doper. 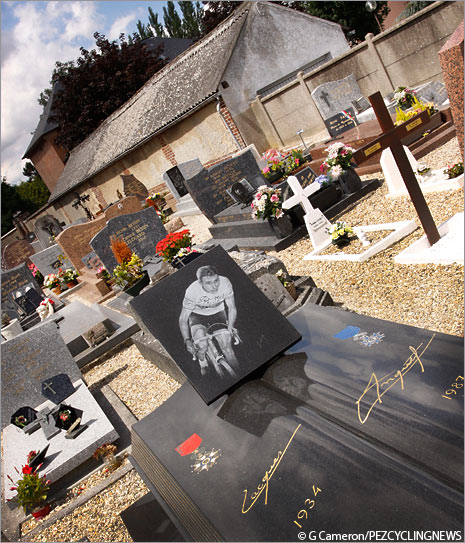 Walk in the main cemetery gates and turn right. You’ll find Anquetil’s tomb easily. It’s more modest than I expected and somehow sits nicely in with the other memorials. Polished black marble reflects the clouds and blue skies above. The man’s signature rendered in gold. His Legion of Honour and his Legion of Merit are represented in red and blue on either side.

His parents, Ernest and Marie, and his grandmother rest next to him in the family plot. Family was always important to Anquetil – it’s just that in his later, very complicated life, he had a less orthodox interpretation of relationships than most. 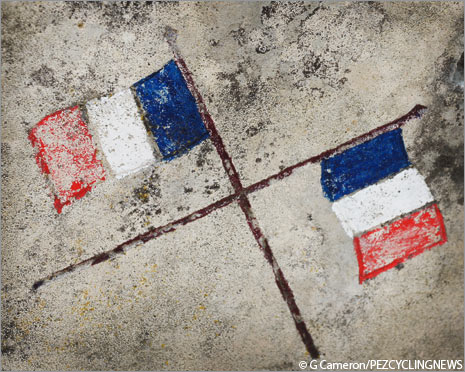 There’s a heartfelt message from the members of the Sottevillais racing club, where Anquetil always maintained a membership. 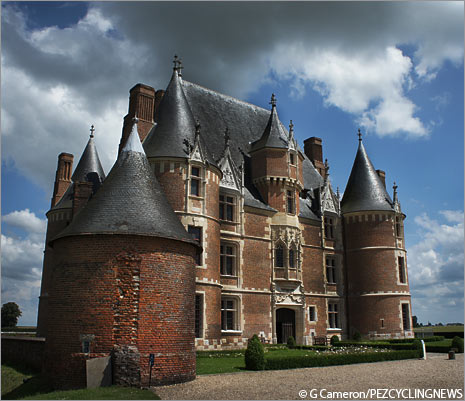 We say our farewells to Jacques, and take the car our of town along twisting backroads to Morgny-la-Pommeraye and onto the D12. Loop around and down to Martainville-Йpreville where the stunning 15th century Chateau de Martainville is incredible, and now a museum to regional traditions. A little church sits in orchard-lined grounds next door. Vast, historic farm buildings complete the scene.

These buildings were here long before Anquetil was ploughing his way up and down the roads, toes pointing down and legs gliding round. They’ll outlast him by centuries, too. Anquetil was only 53 when he died from cancer in 1987. 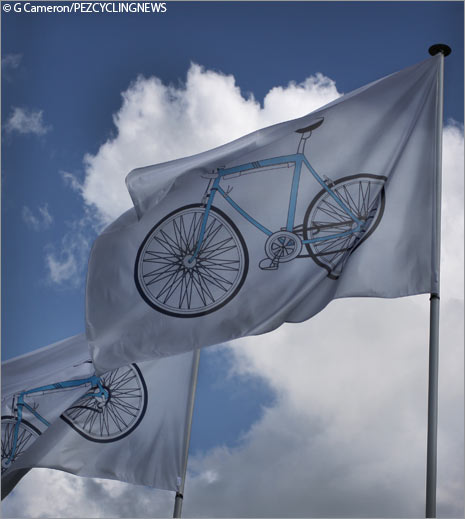 We zip along the straight edges of the D13 towards la Neuville-Chant-d’ Oisel. There’s a little roundabout on the way out of town, and a narrow track leading away into trees. A huge yellow jersey sits against the neatly-kept grass slope. Flags ripple above us. We’re debating, like tourists, whether to follow our noses when a local in a battered Renault car pulls up alongside. 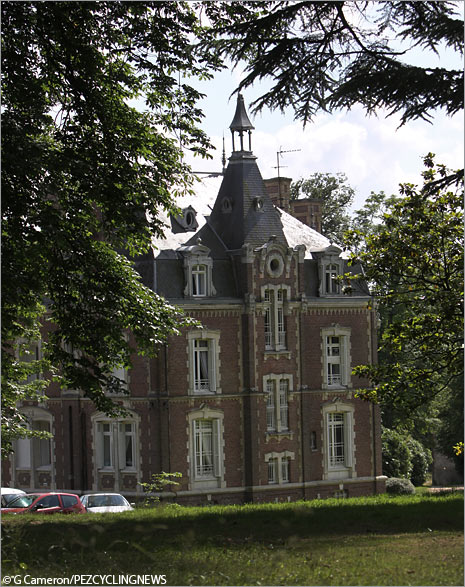 Just go, he says. It’s a circular route, you can come out the other side. It’s Chateau Anquetil peeping through the trees, a massive building surrounded by marquees and well-dressed folk. It’s a wedding day. Bad party music squeals towards us, so we keep a distance. It used to be Guy du Maupassant’s home and was surrounded by vast lands. It was known as Domaine des Elfes or even Chateau des Elfes back in the day. Anquetil took it over in 1969.

It’s the sort of country pile that most of us don’t even ever dream about. Five Tours de France, two Giri d’Italia, a Vuelta Espana, a hat-full of Paris-Nice wins and a very acute business sense (money was pretty much everything) bought it for Jacques. 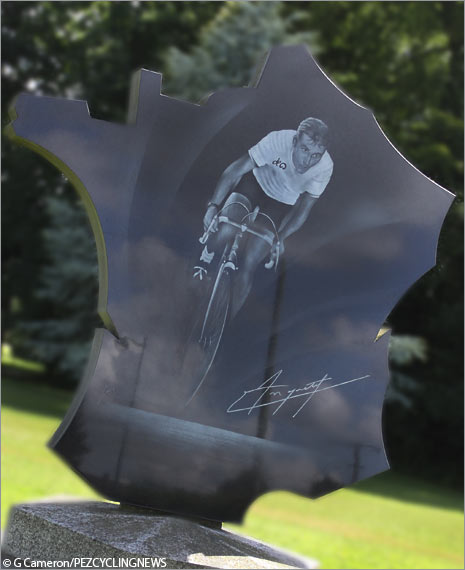 Sunlight glints off another black marble monument: an image of Jacques in out-of-character out-of-the-saddle pose is etched onto the shape of the home country he always felt a little slighted by. Why did the ‘people’ prefer Raymond Poulidour, who only ever finished second. Why did they seem to value Pou-Pou’s pluck and not Anquetil’s brilliance? 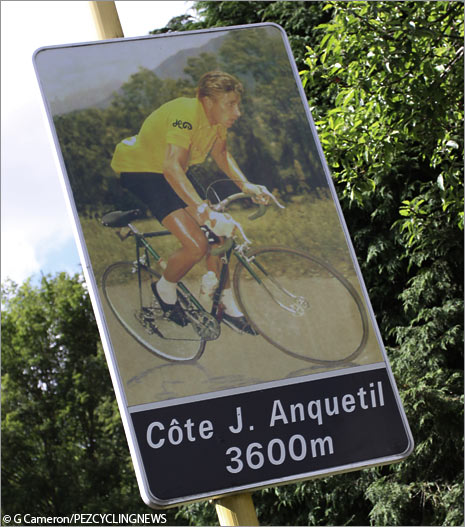 On down the Cote de Jacques Anquetil, a steady but painful gradient which rips and curls down for 3600 meters to Romilly-sur-Andelle. There can’t be many better training hills in the region: keep a steady effort going on this, repeat a few thousand times, and could call yourself a pro. 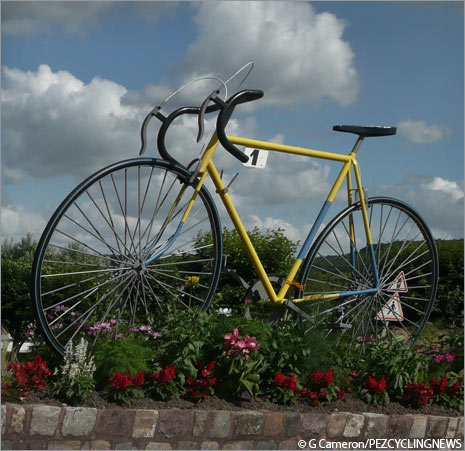 Right at the traffic lights at the bottom and away along D321 towards our hotel, we see the final symbol of reverence to the great man. Our little Anquetil pilgrimage is over. We’re heading to le-Mesnil-sous-Jumieges. 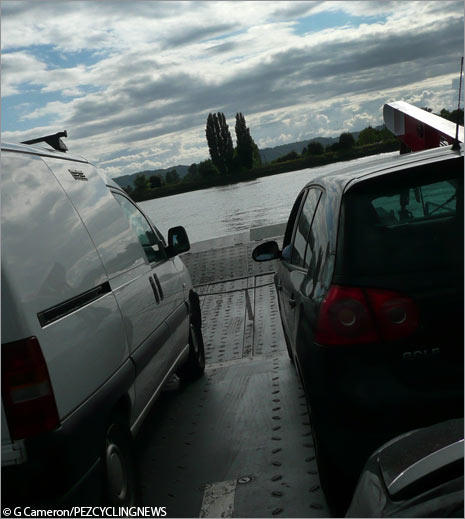 The sat-nav has us steaming towards what we think is a bridge. Oops, no. It’s a narrow ferry crossing, and it’s not even a jump that the Dukes of Hazzard could make. 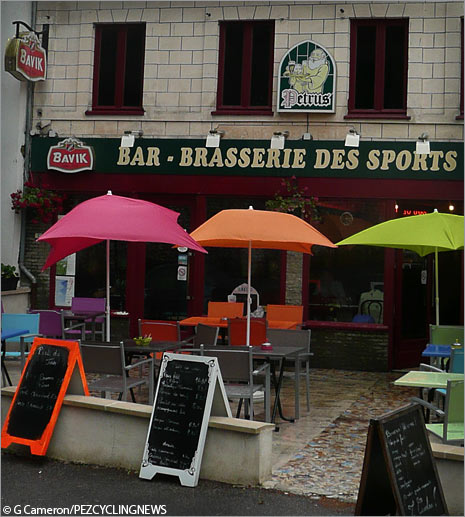 The hotel is at the dead-end of a cul-de-sac on the banks of the Seine. The owner has a bar in town so she says: Follow me, you can eat there. A classic car enthusiast in a little Porsche Carrera is also in residence. We set off in convoy. Even he has trouble keeping up as we screech round corners. I’d give you directions into town if I could, but I drove a lot of the way with my eyes closed.

Predictably, we missed the turn-off for the hotel on the way back. It looked very different at 50 rather than 100kph.

Jacques crashed the first car he bought as a pro at least twice, so he’d probably have approved! Tonight we’ll raise a glass or two to Maоtre Jacques, the first man to win all the Grand Tours.