Roadside Stage 11: Our man on the scene at the Tour, Ed Hood stopped in at today’s stage start to talk Tour with some guys who really know their stuff – the team directors. Here’s what they said…

The half way point has been reached and Bradley Wiggins is one day closer to Paris. Despite the efforts of Nibali and Evans on yesterday’s first real mountain stage, it was only the big Belgian, Van Den Broeck who chipped any time back from ‘Wiggo;’ and not so much as to cause the men with the (now not so) thin blue lines up their backs to lose much sleep.

And as Dave’s statement that; ‘the Tour is Wiggins’ to lose’ becomes more and more relevant – who’s capable of beating the Londoner, and how do you go about it ?

We thought we’d talk to a few men who might provide answers to those questions, before the start of today’s Alpine stage from Albertville to La Toussuire. 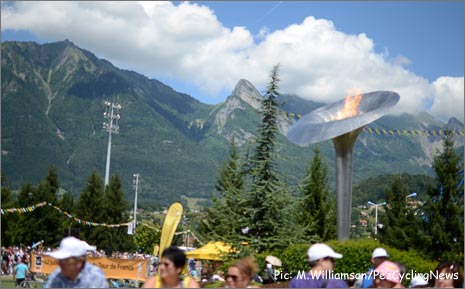 We started with a man well qualified to talk about winning le Tour de France: Stephen Roche, who won the race as part of his ‘golden treble’ along with the Giro and Worlds in 1987: 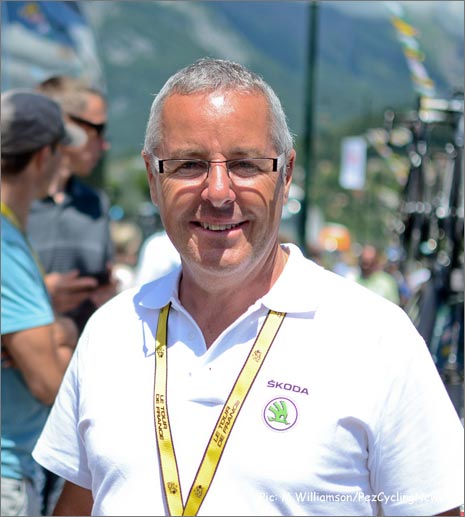 ‘There’s only one way to do it, get away from Wiggins!

I don’t think Evans has it in his legs – and some of the signs he’s showing aren’t the best if he’s trying to win. Yesterday he made that violent sprint at the end, that’s not going to achieve anything, that’s energy that would be best kept for climbing the Madeleine, today.

The thing is that Nibali, Van Den Broeck and Evans all need four minutes if they’re going to beat Wiggins, because he’ll take time back in the final time trial – they’re riding into his hands.

If I was the DS of one of the challengers, I’d be telling him to have a chat to the others. Attack Wiggins in turn, don’t counter each other and leave Sky to do the chasing – ride with intelligence.

Back in ’87 they were different days, we all had our own agendas, there are always races within races but things happen on the road . . .”

And how is it having his son in le Tour? 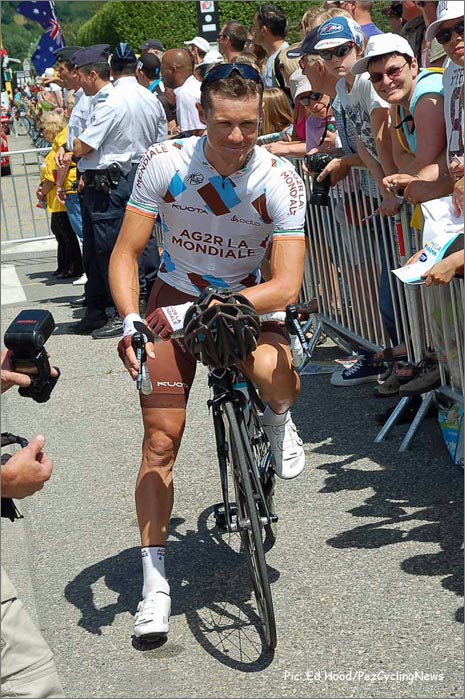 “We speak about racing but don’t go too deep into it, I never tell him what he should be doing – but I do tell him to be careful! We had a cup of coffee this morning, in the village and he’s good.”

On the subject of Cadel, we had a quick word with Fabio Baldato: 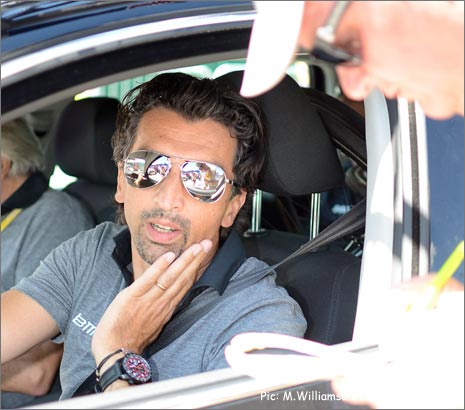 As Martin said, maybe the Italian DS is sick of asking the same questions but the there didn’t seem to be a good vibe in the car.

‘Tactics! Ha! Be in the front!

It’s not just about our team and Wiggins’ team, there are other teams in this race who have their own agendas and it depends on what they do. We have to watch for Liquigas, Radio Shack and Lotto – many things can happen so it’s hard to start the day with a plan where we say; “do this, do that.” 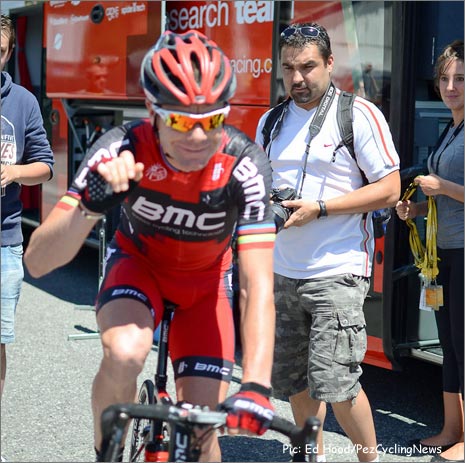 “But Cadel’s morale is good, he’s an intelligent rider and the team is good. It’s the last week that makes the difference in le Tour.”

In a better frame of mind was a man who during his own career always had a good grasp of tactics, Dag Otto Lauritzen, a former winner on l’Alpe d’Huez. 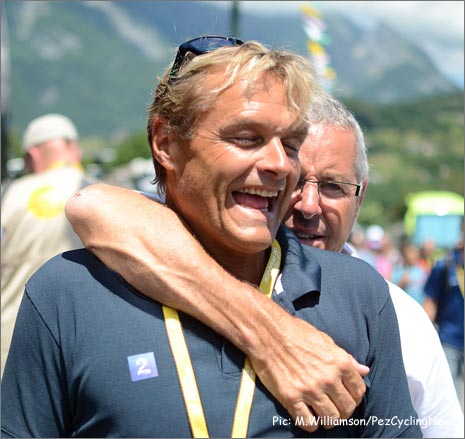 ‘It’s been a nice Tour, the parcours have been good and Sky have been very strong. The others must attack, last year the Schlecks should have attacked more – and this year Wiggins’s opponents have to attack, not just sit and watch.

“Nibali tried yesterday, it didn’t work, but he tried. The Shack have a number of guys who could go on the attack, Van Den Broeck, Nibali and Evans all have to try. The thing is that none of them are strong enough in the time trials – they have to attack in the mountains, they have to attack, now!

“Back when I used to race, the Cafe de Colombia guys would attack from 70 kilometres out. If that happens today, it’ll be a very difficult day for the sprinters – they’ve waived the rule that if there are more than 70 in the gruppetto then you can’t be eliminated, so it could be a very tough day for a lot of guys.

But getting back to who can beat Wiggins; Evans looks good, Nibali is strong, so is Van Den Broeck – It’s just a pity the Belgian came down in that crash and lost stupid time early – and Menchov is good, too. He’s quiet, but very strong.”

Over at Team Sky there’s an air of quiet confidence; we spoke to DS and former Paris-Roubaix winner, Servais Knaven: 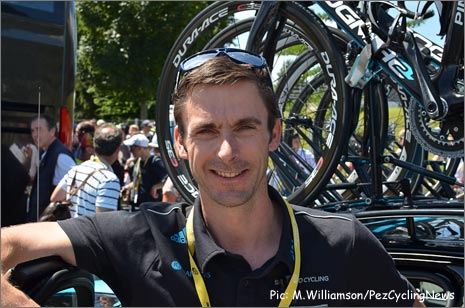 ‘We’re really happy with our first week. We haven’t had to deal with too many attacks; our opposition won’t attack for the sake of attacking – they want a result. Everyone waits for their moment, Nibali attacked yesterday on the descent of the Colombier and gained 40 or 50 seconds but our guys caught him; it’s always difficult to find the right moment to go.

“We’ve done a lot of work on the front for sure, but that’s just the weight you take when you have the yellow jersey. It’s not so bad in the mountains because you have to remember that everyone has to climb the same hills. Evans, Nibali, Van Den Broeck and Zubeldia are all experienced riders, we’ll have to be aware all day – it’s going to be a hard stage but I don’t think anything will go on the Madeleine, it’s too far from the finish. 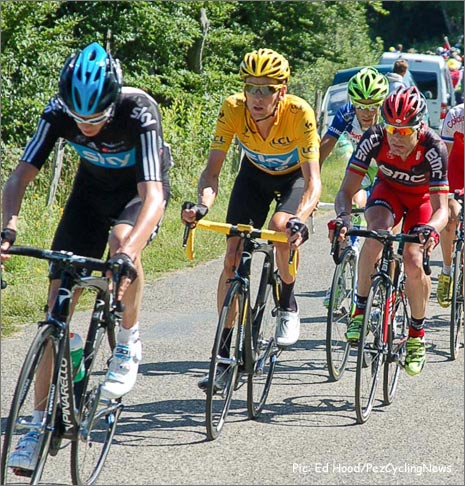 “Bradley’s really relaxed, really confident, he’s been performing at a high level all year – and he’s actually at a higher level here than he was in the Dauphine. He’s ready.”

And we had to ask Servais if he misses riding le Grande Boucle?

“Not any more – I rode it nine times but never liked the mountains. But now I do, I climbed the Galibier recently, with my wife – I enjoyed it but it was at my own speed!”

One of the Sky man’s friskiest challengers has been big Belgian, Jurgen Van Den Broeck; his manager Marc Sergent always has time for PEZ: 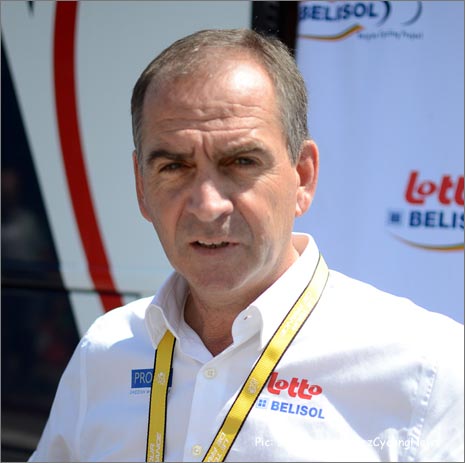 “‘Jurgen lost time when he crashed on Saturday, a rider took his front wheel away from him and then when he went to re-start, his chain had dropped off. What was unfortunate was that just 300 metres past where he crashed, a lot of guys were sitting up, their job done for the day and Jurgen had to pick his way through them.

“Sky have been doing a lot of work and they were suffering on Sunday when Jurgen attacked. But it’s not just Wiggins, Froome is strong, too. And as the race goes on and the gaps open up it becomes easier to control because the riders in the break are not dangerous; Sky are riding on the front, but they’re not riding so hard.” 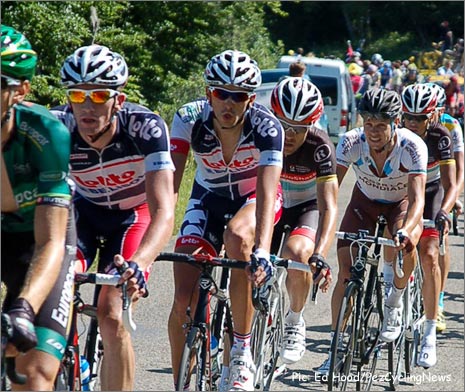 “Today it will be the last climb which is decisive – but Jurgen is the only one attacking and we’re going to wait a little and see who else attacks. Whilst Evans didn’t come here to be second it’s difficult to see how he can gain enough time – and there’s still the last time trial to come where Wiggins will take more time. In the time trial in the last week it’s survival of the fittest.”

We closed by asking him if it looked to him as if Wiggins would win, he shrugged and gave a little smile; ‘I think so.’ 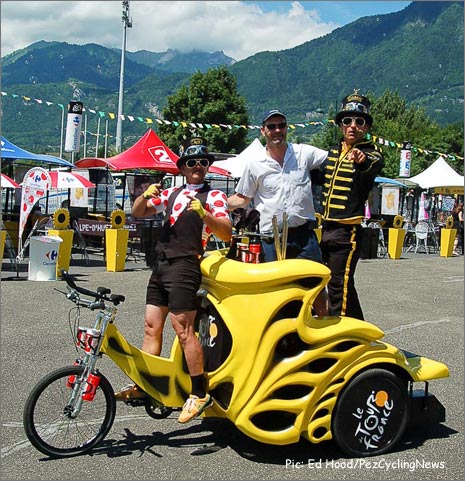 You heard it first on PEZ. 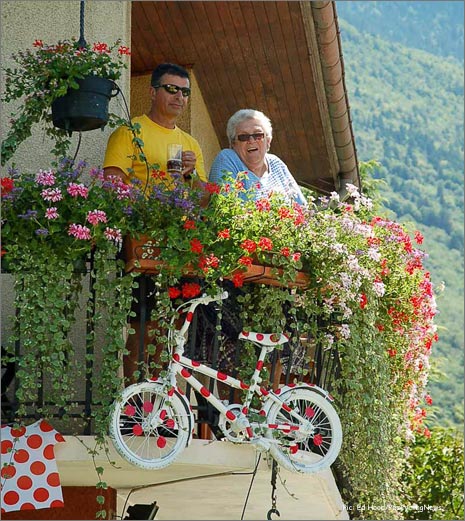