As I found out last month in France, getting there is only a small part of the actually covering the race. You can be 5 feet away from Lance, or a major story, and still miss it because the current changes so fast at the Tour. I now offer Part 2 of my tips for aspiring journalists, Tour watchers, and interested racing freaks… 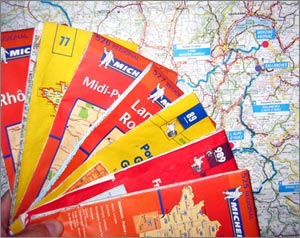 Don’t leave home without ‘em – that is if you want to get anywhere. Part of the official press kit is a Michelin map of France with each day’s stage marked out.

You Can’t Get there From Here
Getting around this country with 59 million people packed into an area barely twice the size of Colorado (that’s 547,000 sq. km), and a new town just 5 minutes up the road in any direction, it’s surprisingly difficult – at first. The country is so squished together, with maps so detailed that 1 cm = 2km of land, us Westerners just aren’t used being this close to the action. Step 1 – get your self well-mapped – I went loaded for bear with about 8 foldable Michelin maps (the best for France), a 2 pound Michelin road-map book, and was always on the lookout for more maps when I was there. If you don’t know how to navigate, learn fast, go with someone who does, or stay home!

Now, I’m usually a pretty good navigator myself, having successfully taught the directionally-challenged Mrs. Pez to guide us around Italy on our last vacation. But it only took me 30 kms out of Lyon (having arrived in France only hours before), on my way to the Alps, to miss a huge auto-route turn to Grenoble, and 30 minutes later found myself thinking “I’m not in Kansas anymore” as I sat at a toll booth plotting a new route from Chambery to my destination to the south. Lesson learned – take time to know where you’re going, note all major interchanges, and stop to recheck the map before you make that turn… Getting lost can cost you hours in France, and time is the most precious commodity when chasing Le Tour.

The distances covered are much longer than they appear – and you should expect to be in your car 3-5 hours each day getting from stage to stage. This is simply because you’re not traveling on the fast autoroutes, and everything else comes with lots of unpredictable traffic. As the race winds it’s way through the mountains, plan on taking about 1 minute to drive every kilometer – we’re talking 40 miles an hour here – ! 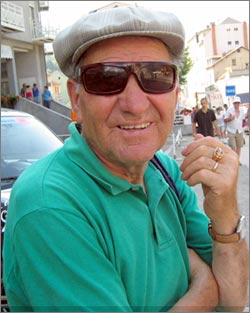 If you’re lucky, you’ll meet someone like Romeo here, willing to offer directions to anywhere you need to go…

At The Race
Finding your way around the race is probably the easiest thing to do during the Tour, since most of France can tell you “ou e le Tour”. The routes are lined with gendarmes the whole way, and they usually won’t let you onto the course if the race is due within 2-3 hours. The exception of course is to official press vehicles. Every registered vehicle gets 2 stickers – a wide banner for the front window and a smaller number to go in the back. The stickers are different colors depending on your credentials designation, and allow you different types of access at the starts, finishes or on the course. Journalists like me got a blue sticker, which appeared to be the lowest level of access. I was allowed to drive the closed course ahead of the race, provided I was about 1 hour in front of the publicity caravan. I could also follow the race, but behind the whole entourage, which meant a relatively slow ride to the finish town. 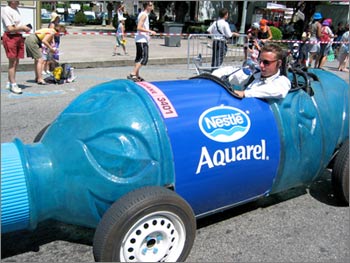 The fastest way to the finish town of each stage is along the closed route. You’ve got the road to yourself, the picnicing fans are all waving happily as you pass by, and you can relax a bit and fully enjoy your status as Tour Press-Guy.

You gotta behave though. One false move and a Tour official could (and would) rip your stickers off the car and ban you from the race. I know some guys who got banned from the press area for trying to sneak into the press room as well – bs-ing the French officials is a tricky game best played with a full comprehension of their language, and some insider experience gained the old-fashioned way – ie: you’ve done this before.

I drove the last 40km of Stage 11 from Narbonne to Toulouse on the closed route. The roads were freshly paved, lined with big shady trees rolling though sunflower-soaked fields – beautiful. I thought I might actually get to drive across the finish line, when a gendarme waved me off within 200 meters and directed me to a lot for other blue-stickered cars. Knowing the exit would later be plugged with hundreds of cars, I tried to leave myself a clear escape. 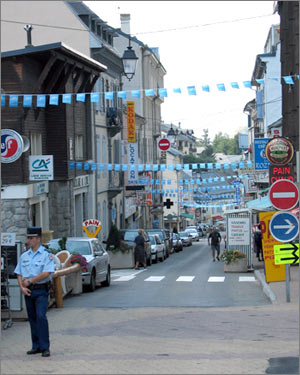 The guys in blue are also happy to tell you where to go.

Getting out after the stage was another story. There seemed to be one road out, that everyone was funneling into – press, team vans, race fans, it was walking speed at best. Not wanting to sit any longer than necessary in the 100 degree heat on this airport tarmac, I wandered around looking for anything interesting, and actually got myself into a vip tent where they were serving up the strongest sangria I’d tasted, and some type of French oompa band was literally blaring away. Eventually I figured out that using my press creds would allow me to drive out the race route the way I’d come in – along relatively empty streets past the clean up crews, and headed in the right direction back to my hotel!

Fortunately the Tour press kit contains a book of very detailed maps of all stage starts and finishes, showing how to get in, where to park, the locations of the press rooms, vip areas and so on.

Meeting Riders “You’re Name’s Not On the List…”
Obviously, one of your main objectives will be to meet riders, team directeurs and personnel – and with any luck you’ll get a scoop. Of course I thought this would be a no brainer – since everyone in the racing side of the biz is at the Tour, I’d have a packed schedule of meetings and interviews – heck, I had visions of fighting ‘em off with a stick… 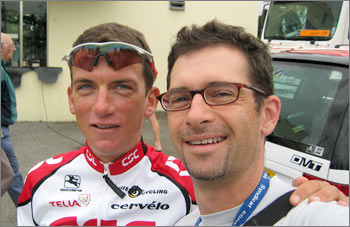 Don’t laugh – you’d do the same thing if you met Tyler!

Okay, back to reality. The teams are at the Tour to race. Period. They don’t want to talk to you, me or anyone, and the less distractions the better. The Tour press kit even comes with a book listing all hotels for each team by stage, but just try getting a call returned…

The best bet to meet insiders is at the Tour Start Village, the daily shmooze-fest before each start. I discovered the riders tend to stay away from these as well, since they seem pretty easy to get into, and are pretty jammed with autograph seekers and googly-eyed fans. At the start in Bourg d’Oisans, I ran into Rudie Campagne – the big boss of Vittoria Tires who are a main sponsor (and provide the Team bus for) the Bianchi Team. He took me over to the bus, but even he wasn’t allowed on while Jan and co prepped for the days 3rd Alpine stage.

I also observed the riders are pros at focusing on the task at hand and blocking out whatever’s around them. At the stage 12 TT start in Gaillac, Richard Virenque sat spinning on a trainer for about an hour, completely oblivious to the fans staring at him from the other side of the barrier, I called out to Tyler Hamilton as he warmed up 5 feet away from me, but he too was in the zone listening to his disc-man.

As humbling as it was, I realized that “PezCycling News” is not the journalistic-juggernaut of my dreams – yet. So it’s back to building the network one person at a time – and treating people with respect and courtesy to make the best impression possible. Someone once said: “Be kind to people on your way up, because you’ll meet them again on your way down.”

Hey – why not read Part 1 again – just for sh*ts and giggles?