One of the integral aspects of “le Grand Boucle” is the pomp, circumstance and promotion that goes with the event. Being a race of epic proportions, it requires an epic beginning, and the French deliver the starting festivities for each day with their own “savoie faire”. Nowhere is this more evident and in your face than in the race village – or “Village Depart” (say vee-lajj day-par). It must be seen to be believed, but I’ll do my best to give you the jist… 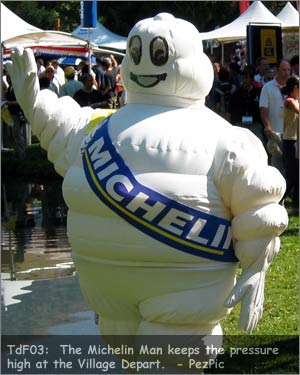 The Village usually opens around 9:00AM before each stage, and is located very near, or adjacent to the riders’ sign-in area, and official start line. I arrived at village in Bourg d’Oisans for the start of Stage 9 at about 10:00, and had I been 3 cars earlier, I’d have made it to the proverbial “other side of the road” where my official media parking was located. Instead I got to see the Tour caravan pull out and start it’s 200km promotional journey across the Col du Lautaret, Izoard, and to Gap. It’s a parade of cheesy sposnors’ floats, the ubiquitous euro-pop a-blaring, and Young French hotties flogging various products. It is pretty cool to watch, especially since it’s got plenty of that European difference – which is the main reason it’s so entertaining. 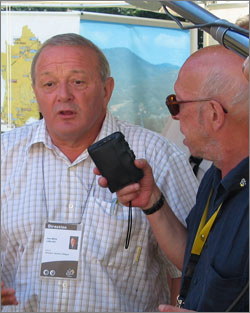 The caravan passed in about 15 minutes and I was soon headed to the Village on my bike after parking about a km away. Of course the barriers were up, lining the race course, and there’s the army of gendarmes blowing whistles and generally giving directions to anyone within ear-shot. These guys (and women) do love telling the fans the proper way to behave. The coolness of the ride in was not lost on me, as I was inside the barriers on the actual race course, while the rest of the fans – the great unwashed – were packed 5-10 deep on the other side. The general envy was awesome.

Upon arrival at the Village gate, I immediately distinguished myself as a foreigner by attempting the completely incorrect move of taking by bike inside. The two guys minding the store refused to let me pass, and there was no amount of bargaining or pleading that was going to make them changez-vous their minds. Their main argument was that there was “no room” inside for my bike, even though the village was about the size of a medium sized grocery store, all fenced in, with plenty of room for one bike. Yeah right, buddy. I ended up leaning my steed against at fence and hoped it would be there when I returned. 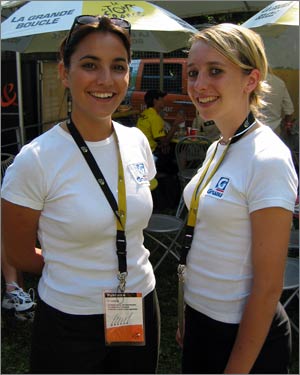 Inside, the place was packed with media types, Tour guests, and Tour-wannabees doing the full-on schmooze, and their best to grab as much of the free stuff as they could eat, drink, or carry. And let’s not forget the promotional girls. They get hired to work the Tour start and finish every day, and are usually students or models, basically all being cute and distracting. Not a bad summer job…

Sometimes you’ll see a rider in the village, but as CSC’s Andrea Peron told me, most stay away because it’s way too nuts, especially before the start of a stage. In fact, the only riders I saw were a couple of young pros I didn’t recognize, and ex-Tour stage winner and ONCE super-domestique Neil Stephens. Neil is cool. He looks great, really fit, and laughed with me about how my two buddies at the gate even hassled him about getting in. Apparently knowledge of cycling is not a pre-req to get a job at the Tour. 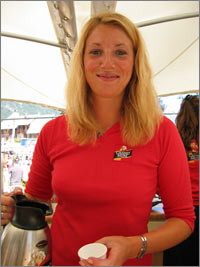 All the sponsors have set-up booths or tents, displaying their wares and offering free samples. There’s the coffee bar, the water bar, the Coke bar, and of course the wine bar. 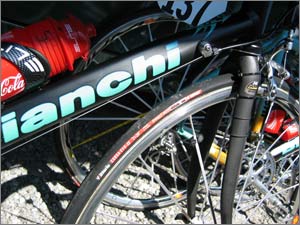 Then I bumped into my old boss Rudie Campagne from Vittoria Tires, who provide the bus for Team Bianchi. He gave me a quick look at the team’s bikes, but access onto the actual bus was verboten, seeing as we were minutes away from the riders signing in.

The stage was due to start at 11:45 in about 20 minutes. There was a huge crowd watching riders sign in – Virenque got the biggest cheer I saw. Then one of my buddies at the gate started ringing this huge Cow-bell –the signal for all schmoozers to report to their cars and hit the road – that is if you want to drive the Tour route ahead of the race and make it to the finish in time to see it, and write your daily stories. So off I went – my bike was where I left it, and I admit I was pretty excited as I got back to the official Pez-Tour mobile. By now the fans were all on the other side of the barriers, and then I heard someone call out of the crowd – “Hey Pez!” – (okay they were new friends from the Experience Plus Alps tour, but it was still cool). 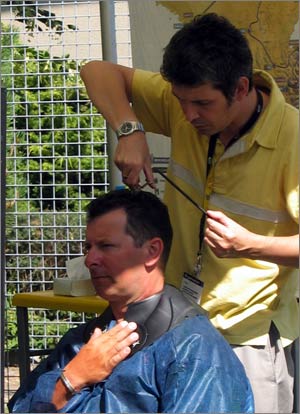 Coiffures by Jacques – I’ve heard about, even seen it on tv, and now here it was before my very eyes – the famous “salon du Tour”.

The Tour route is by now pretty much closed to traffic, and I was headed up the Col du Lautaret to catch the action over the first climb of the day. I actually thought about riding the 40km myself, but it was another blistering day, and the route itself had way more climbing – albeit through a spectacular gorge – than I could handle after my own battle with Alpe d’Huez the day before.

One thing that will always be with me is the memory of the fans along the route, waving and cheering as I drove by, for no other reason than I had a media sticker in the window, and I was on the “inside” of the race. So there I was driving along with a stupid grin on my face, waving and honking back.

Pez Note: I gotta say, the pace of the Tour being frantic is entirely true. Getting anywhere in France on a schedule seems almost impossible- and all the driving between stages has really eaten into my own hoped-for riding time (hey – you didn’t think iId come all this way and not get in a few rides?). Then there’s the issue of getting connected to the internet. It’s a whole new ballgame in every town. Most of the hotels offer only dial-up 56kb connections. The days are long – usually I’m on the go from 7:00 till 10:00, then working till about midnite. And did I mention the heat? Oh I did…

Thanks for reading and you’ll hear from me next in the Pyrenees.