Yesterday I caught the action at the stage finish in Toulouse, driving ahead of the caravan for the last 40km of the route. I made it to within 300m of actually crossing the finish line, and saw some quintessentially “Tour” stuff on the road, which was only outdone by what I saw at the finish…

Where To Stay
For this half of the Tour I’m staying with the guys from Inside Track Tours, who specialize in showing vacationing guests the “inside track” at major races. Joe Tonin and Frances Kelsey (Inside Track owners) have been coming to the Tour for years, and really know how to see the race, do the great rides, and stay in unique, out of the way hotels that in themselves are amazing spots. My first night with them was in the Provencal hilltop town of Gordes, in a hotel that belonged on “Lifestyles of the Rich and Famous”, situated atop a high ridge with a breathtaking view to the south. 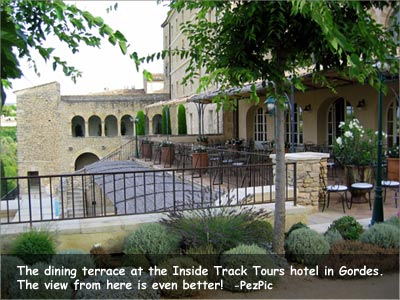 On To The Tour!
The day of stage 11, I needed to get about 100km from another amazing hotel to Toulouse. The best way was to connect with the actual race route, as these are closed to traffic before the race, which makes them the only roads in France not packed with traffic. Much like my drive up the Lautaret 3 days ago, the fans were out in force, set up with their picnics, lawn chairs, umbrellas, and patiently waiting another 2-3 hours just to see 30 seconds of the Tour.

The route itself was beautiful, roads shaded much of the way by ancient oak trees, I’m guessing planted by the Romans, and endless fields of blooming sunflowers covering the rolling hills. It’s the only way to see France! 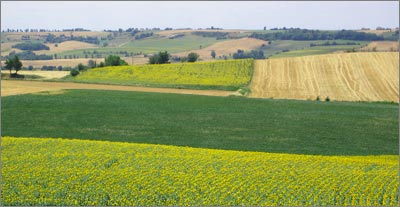 As I crested a hill, my heart skipped a beat as I saw I was about to have another “Must Do” moment to make my Tour visit official – I was about the meet “The Devil” himself! We’ve all seen him on tv for years, traveling around France in his micro-minivan, towing an impossibly huge bike sculpture-thing, dressed in his red tights and waving the pitchfork like a nut. Apparently he speaks on German, so I have no idea what he said, buy he loves posing for pics. 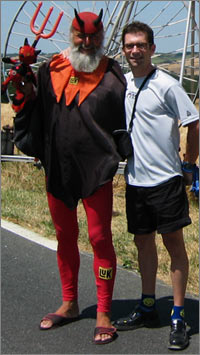 You never know who else you might see, but I could recognize Steve Bauer’s pedal stroke anywhere. Steve now operates his own tour company. 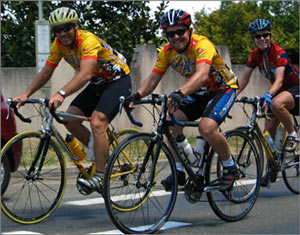 The Pez Is On The Course
In France the “rule” book is almost as thick as in Italy, and I was expecting at any moment a gendarme to pull me off the route for some reason only he could invent. I could feel my own adrenaline build as I crossed under the 10km kite, and then the 5km kite without incedent – how far could I get?

Then I passed the 3km and 2 km kites – I was completely inside the barriers, driving alone in 2nd gear to soak up every bit of the experience – then 1km, 900, 800 700 meters to go – I could see the finish line – was I early enough to actually drive across it? My heart pounded, my eyes raced from side to side, no gendarmes took notice… Then: at 200 meters to go, up went the hand on the man in the blue shirt and my bid was done – I was shown to the press parking lot. Aah mannn… 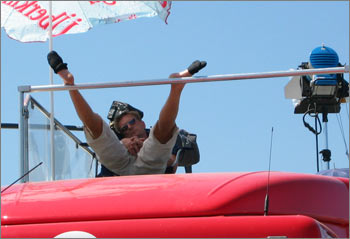 The race wasn’t due in for a couple of hours, so I followed this guys lead to relax.

The Finish
As the race approached, I positioned myself just after the finish, near the team busses to catch the riders. There were hundreds of fans jamming the area, and within seconds of the finish, a stream of riders rolled through as fast as they could, bee-lining it for their buses. I saw Rolf Aldag give a little girl his bottle, I saw some Euskaltel fans tear the number off one of their riders and clutch it like their own Holy Grail. 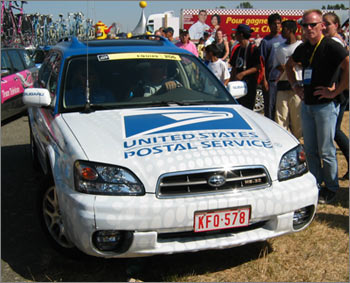 Where’s Lance?
This crowd was near frenzied, and ready to explode at any appearance of the race leader. But minutes passed and no sign of Lance. I knew the jersey presentation was just finishing, so I sharpened my lookout. Then out of the crowd emerged a USPS Subaru Outback, complete with all black windows on the sides. It had to stop because there were still so many people. But then a distraction created by the appearance of Richard Virenque road by in his polka dots, drew the crowds attention, which opened a space for the USPS car to go. Then it hit me, of course – the team has a car waiting for Lance behind the podium so he can escape unimpeded – and by now the team bus had already left. I looked closely and sure enough, there in the back seat, wearing his dark USPS jersey, was the race leader. You’ll be glad to know I managed to retain my dignity and did not pull a Wayne Campbell “I’m not worthy” bow.

Finally, the crowd began to thin and the rest of the team busses were able to inch their way out, by now about an hour after the finish. Of course, there was still plenty of time left for the Saeco driver to lay on the horn – . 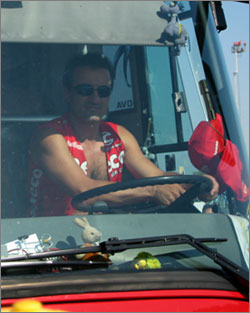 There’s so much more to tell, but now I’ve got to get to the TT start in Gaillac – the weather is sunny again – perfectly “distracting” – I’ll be back in a couple of days!