Most of you know I’ve just returned from covering my first Tour de France as a member of the official “press”. I’ve followed Grand Tours several times as a fan, but discovered that this type of “working vacation” is a lot more work, and requires way more organization than just pedaling the big climbs and screaming at the top of your lungs as Lance & co flash by… Here’s Part 1of my PEZ-Guide to covering the Tour as press… 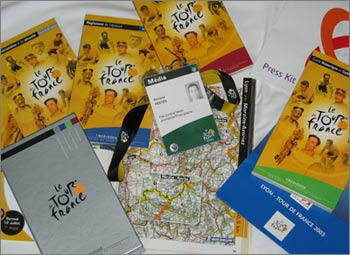 Getting Credentials
Going to the Tour is a great experience no matter how you slice it, but let’s face it, if you can get the press creds – it kicks the whole thing up a notch. It separates you from the “great unwashed”, and is the best way to
impress any TDF fan, oh, and it gets you into some cool press-only places as well.

There are several levels of credentials you can apply for, ranging from teams, sponsors, media (with various levels of press), and a few more. The process is a lengthy one, fully supported by the French love of doing things the “correct” way. I originally applied online in February, as did several other journalists I know. Response from the organizers was sporadic, some
of us received some prelim info after a few weeks, while others, like me, heard nothing until I sent several follow-up emails. Then, about 4 weeks before the Tour start, I received a package, addressed by hand, with another set of forms to be filled out and returned. Unlike most of the North American races where creds can be applied for, approved, and issued online,
the Tour system favors lots of paper work, inconsistent follow-up, and confirmation only when you ask for it via repeated phone calls and emails. But hey, I was told they receive over 5000 individual requests for Tour creds, so I suppose I should cut ‘em some slack.

When I arrived at the Stage finish in Lyon to pick up my creds, everything went quite smoothly, although I did have to return a few days later to collect the full set of docs and press materials, which were somehow missing in Lyon.

The Plan – Get There & Get Organzied
If you’ve ever organized a trip you’ll know you need to get there, a place to stay, a way to get around – all of which takes a fair bit of organization, unless your wife/partner/assistant is kind enough to make arrangements for you. But, for the Tour – as the 21 stage travelling circus it is, you need to repeat these basic steps in part or unison every day. Getting to France was pretty simple, get on the plane, make your connections, and boom in about 12 hours you should be munching a baguette with bags under yours eyes. 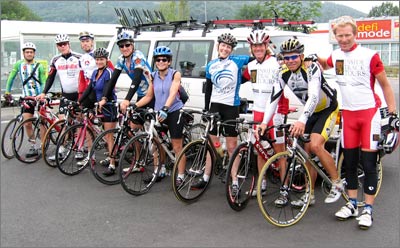 Stay Somewhere
My lodging was covered by choosing to stay with 2 different tour companies who took care of hotels, breakfasts and dinners, and provided all transfers and detailed rides each day. I was with Experience Plus in the Alps and Inside Track Tours in the Pyrenees – both very well organized and with great knowledge of the France and the race. Travelling with these guys made my ambitious Tour coverage a lot easier since I didn’t have to deal with organizing and negotiating a new hotel every night (which is way tougher in France than it should be…) or figuring out French menus at the end of my long and tiring days, and more enjoyable as I ate meals with their guests – all of whom were avid cyclists and nice people. I fully recommend using a tour group like these as an awesome way to see the race and ride in France – they take care of the details so you don’t have to. 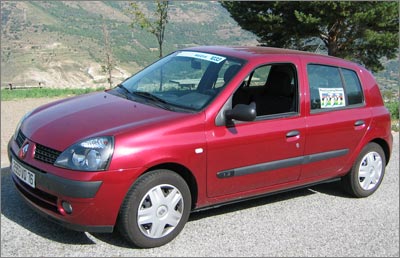 The mighty PEZ-mobile. This baby’s 1.2L engine will actually get up to 150kmh…honest.

The Car
My plan was a bit ambitious, compared to folks who (smartly) give themselves a couple of days to adjust to an overseas flight and 9 hour time difference. I hit the ground in Lyon at 2:30 in the afternoon, after a transfer in Frankfurt, with plenty of time to get to the stage finish and pick up my creds. First thing though – pick up rental car. Should be a no brainer right?

My budget allowed for rental of a Renault Clio – which I discovered was not big enough to hold my bike box. (Note to self: “pack bungee cord on all trips.”) Unfortunately, an impromptu upgrade was “eemposSI-blhu” as they were out of cars.

A bit ticked off, but determined to skip through this, I slid the seats as far forward as possible, they jammed, twisted, and stomped the bike box until the hatch finally closed – success! Hey – who cares if my new headrest is made of cardboard? – I could solve this one later. (Which I did by ditching the box at a hotel in Orange that I’d be returning to at the end of the trip.) So I fired up the manual a/c (ie: rolled down windows), and blasted off in search of Lyon and the stage finish. 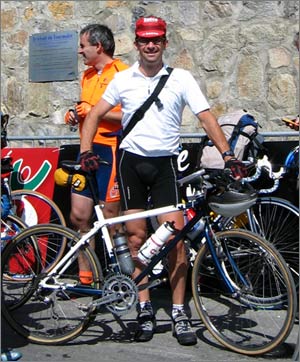 Atop the Tourmalet – it’s fun kicking ass on a mountain bike – try it sometime.

The Bike
The bike is perhaps the most crucial piece of Tour-covering equipment. I mean, how can you attend the world’s biggest race, watch it on the most beautiful roads, and not cut yourself a slice of the “cycling-in-France” pie? I did a few “Top 10 In My Life” best rides there. But my motivation was practical too – the roads getting into/ out of stage starts and finishes
are horrific traffic jams. The 15km descent of Alpe d’Huez for instance, was bumper to bumper, not moving, traffic for hours after the stage 8 finish. I heard stories of drivers taking 2 hours to get off the mountain the day before the stage! Bike is often the best and only way to get into the action fast – I’m no dummy! So I found the best plan to be – go by car, then by bike, then by foot – to see all the action and get where you want.

And one last note on choosing the bike to cover the race. When you’re lugging around a laptop, and 2 digital cameras worth several g-notes, the last thing you want to worry about is your $4500 two-wheeled super carboned-out pride and joy. I left mine at home, and took my sooped-up courier bike: steel mtb frame, skinny road tires just fat enough for comfort and no flats, special gearing of 39/50 x 12/28 – perfect for climbing the big mountains. Hey, I still rode with all the skinny tire boys, and blew enough of ‘em into the weeds on the climbs to satisfy my ego.

If you’ve read this far, you’ll probably know I’ve only scratched the surface on the logistics of covering this race, and by now you’re either late for that weekly status meeting or you coffee is cold. Don’t worry – there’s lots more to come – in part 2 about getting around France and getting to the riders…