The 100th Tour de France got off to a rip roaring start today, on the 168k opening relatively flat stage from St Denis Montergon to Meaux. It was Giro sensation Alessandro Petacchi (Fassa) grabbing stage glory from perennial Tour Green jersey Eric Zabel, ahead of a smash-up-derby style crash that stopped 80% of the field in the last kilometer. 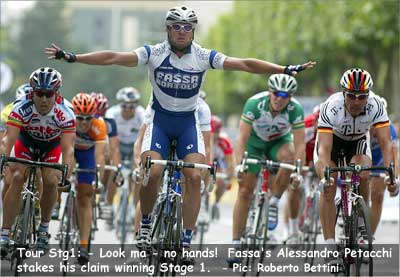 But earlier in the day… A typical suicide breakaway got away early, at the 19k mark, consisting of Christophe Mengin (FDJ), Walter Benteau (BLB), and Andy Flickinger (AG2R), who is coincidentally the tallest man in the Tour. The three escapees made their break a little less typical, by maintaining it almost all day long, with the AG2R rider separating himself from his escape partners with about 25k to go, but for no good reason other than extra TV time. As it came to pass, Lotto Domo, Fassa Bortolo, Vini Caldirola and Credit Agricole took up the liesurely chase and consistently closed the gap, then put the screws to it as the finish in Meaux drew near.

With teams and sprinters jockeying for position in the closing k’s, Erik Zabel had a bit of a scare and dropped off the back for a rear wheel change. His team smartly dropped back to pace him up with 10k to go, and sure enough, the magenta steam train got Erik to the front to factor in the sprint.

But it was Giro wonderboy Alessandro Petacchi who came to the good with help from his super strong Fassa boys, edging out Zabel, Bettini, and McEwen to take the first stage of the Tour de France 2003.

The finish was marred inside the last kilometer by a monstrous pile up, caused by Kelme rider Gutierrez losing his cleat in the last turn, and making a mess of a crash. Riders cascaded over him and those that went down immediately with him. All riders were within the 1k to go banner, and thus all were given the same finsihing time. Jimmy Caspar of FDJ.com was put in a neckbrace, but was giving the thumbs up sign as the camera neared him. All other riders, most of the field hindered in some way by the crash, came in slowly and in small groups. Yellow jersey Brad McGee was helped across the line by a teammate, but looked only mildly shaken.

Whisper: Our man on the inside – CSC’s Andrea Peron….just called Dunc to say Tyler Hamilton is in Hospital!! he got caught up in the accident and has hurt his shoulder, is having an x-ray….Andrea and Nico Jalabert were also in the accident…..all whispers and Hamilton crashes again but this time not his fault! We’ll keep you posted as the latest arrives.