Today’s second stage in the centenary edition of the Tour de France was slated to be another for the sprinters, but it almost wasn’t so. Jean Delatour’s Frederic Finot spent all but 9 of the 204 kilometers of the race off the front, attacking 5 kilometers after the start with fellow Frenchman Lillian Legou of Credit Agricole. The duo would build a maximum lead of just over 11 minutes on the roads to Sedan, but in the end it was an Australian on the FDJeux.com team who leapt out of the field, no – not race leader Brad McGee, but his teammate Baden “Cookie” Cooke; beating Jan Kirsipuu and Damian Nazon in a mad dash to the line. 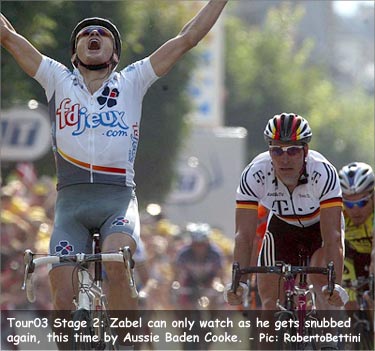 The talk of the day at the Village Depart was around the American Tyler Hamilton who, despite breaking his right collarbone in two places during the massive pile-up during the run in to yesterday’s stage 1, decided to continue in the Tour and try and recover before the big mountain come. “Tough as Nails” Tyler is no stranger to riding with pain, in last year’s edition of the Giro d’Italia the Marblehead, Mass. native finished an impressive second while racing with a broken shoulder blade. Tyler had his mechanics triple wrap his handlebar tape (sic) and managed to finish in the main field.

Less lucky was the Italian poster-boy Danilo DiLuca who was unceremoniously spit out of the back of the charging peleton at kilometer 25, supposedly suffering from a cyst. Also dropped were the sprinters Jimmy Casper and yesterday’s stage winner Alessandro Petacchi. The former was sporting a nifty neck brace and an extra short stem as a result from the injuries he suffered yesterday and the latter, despite picking up a time bonus on the road and moving himself within reach of the yellow jersey, was dropped 5 km from the finish on an uncategorized climb.

The new darling of France has to be Frederic Finot who, at one point, looked set to win the stage and take the yellow jersey. The Breton gave Jean Delatour (a much maligned selection on the part of the race organizers ASO) a much needed publicity boost. Finot would drop his break compatriot Legou on the final Cat 4 climb with 40 kilometers remaining and would keep the better part of a 5 minute advantage for the next 30 kilometers. It wasn’t until Cofidis’ David Millar, still fuming after his prolouge disappointment, launched a vicious attack that Finot’s advantage would be all but wiped away. Millar’s acceleration caused a split at the head of the race and yellow jersey McGee was the one to close it down.

With no Domina Vacanza in this year’s race, the sprinters lead-outs were as organized (and effective) as a clutch of drunken monkeys banging away at typewriters, trying to reproduce a Dosteovsky novel. In the end, Baden Cooke was able to come off of Kirsipuu’s wheel to give FDJeux a second stage win and bring more glory to the boys down under.