This year’s team time trial, the fourth stage in the Tour de France, proved be an exciting day for team US postal who won their first team time trial in the tour and even more so for their rider, Victor Hugo Peсa, who became the first Colombian rider to wear yellow in the Tour. His one second lead over Armstrong and the yellow jersey make for a dream gift, as Peсa celebrates his 29th birthday tomorrow. 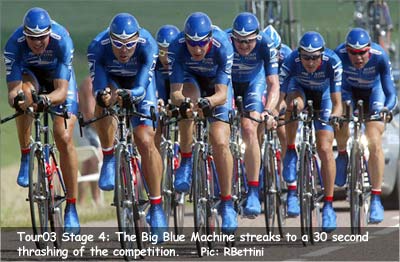 The team time trial again appeared to be a battle between the usual suspects, with the strong riders such as Armstrong, Ullrich and Simoni all looking to power their teams to a win as well as well as the prescience of the often dominate ONCE-Eroski team who has beaten USPS twice in past years. However, USPS came out on top thanks to a patient and tactical effort that concluded with an impressive charge with 10km remaining 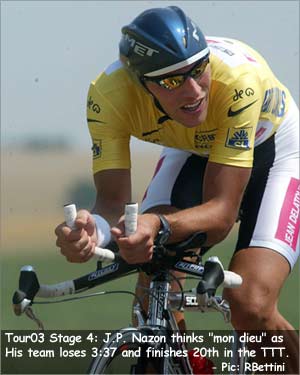 From the outset, Telekom were the early leaders, but were passed by four other teams at the 44.5km mark.

iBanesto.com gave an impressive effort that earned them a fourth place finish, but appeared more threatening in the earlier stages, prior to the USPS charge.

USPS was behind six other teams at the first of the time checks, but ended up besting the ONCE formation by 30 seconds with an average speed of 52.77 km/h.

Team Saeco and Euskaltel-Euskadi were both well off the pace over three minutes back which certainly damages the ambitions of their stars (Gilberto Simoni and Iban Mayo) in the General Classification.

This puts team US Postal first overall, with Victor Hugo in yellow, Robbie Mc Ewen in the green jersey and Christophe Mengin wearing the poka-dots.