To-day’s 167.5 kilometre stage from Charleville Mйziйres to St. Dizier is flat, very flat. A 4th. cat. climb after only 8.5 kilometres and three sprints to bring them to the finish, a sprinters gift? Maybe……

With the team time trial tomorrow, the top riders would have wanted to keep things nice and easy, but Jean-Patrick Nazon (Jean Delatour) and Jaan Kirsipuu (Ag2R) had a different idea. There was enough seconds bonous to put one of them in yellow. 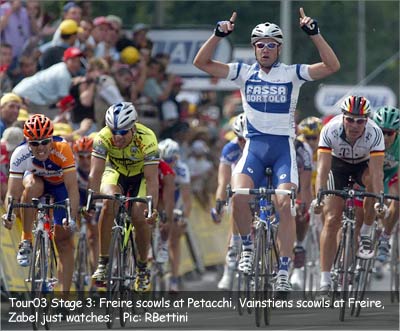 The little climb at 8.5 kilometres was taken by Paolo Bettini (Quickstep), then at the first sprint at La Chesne it was Kirsipuu from Nazon and the green jersey of Robbie McEwan (Lotto/Domo) in third. After the sprint a group of three, Unai Etxebarria (Eusaltel), Maryan Hary (Bioches La Boulagйre) and Carlos Da Cruz (F de Jeux) slipped off, F de Jeux were happy to let them go as it would take the time bonous sprints away from Nazon. The three never got more than a minute and were pulled back 5 kilometres from the sprint at Ville-sur-Tourbe (75 kms). The bunch was one long line and Tyler Hamilton (CSC) did’nt look too happy, but Jimmy Casper (F de Jeux) must be geting used to his neck brace.

The yellow and green jersey were at the front sprinting it out with Nazon and Stuart O’Grady (Credit Agricole), Kirsipuu did’nt seem to have the speed and it was Nazon first, McEwan and O’Grady, this made Nazon the race leader on the road.

With a cross wind David Muсos (Kelme), Nicolas Jalabert (CSC) and then Anthony Geslin (Brioches) tried lone breaks. Geslin attacked just before the feed with 80 kilometres to go and the bunch slowed to allow him a 2 minute lead. 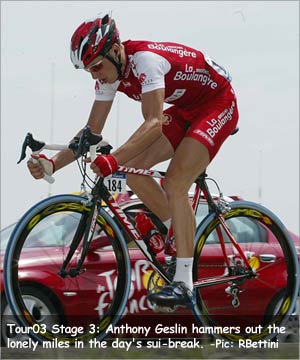 Joseba Beloki (ONCE) managed to have his toe-nails cut on the move and things settled down with Jean Delatour in charge. Geslin now had 3 minutes with 66 kilometres to the line and one more sprint to go.

A strike protest by “artistйs” slowed things down, but not much, Geslin was now at his maximum lead of 3 minutes 5 seconds.

Geslin took the sprint at Mogneville on his own, the battle behind was won by Nazon again from Kirsipuu. It was now all the sprinter teams to the front, Loto/Domo, Fde Jeux, Ag2r, Fassa Bortolo and a very tired Jean Delatour, all doing their bit to pull back Geslin and put their sprinter in a good position.

Alessandro Petacchi (Fassa Bortolo) was in the best place, Romans Vainsteins (Vini Caldirola) had to be pushed aside and behind a tussle between McEwan and Rene Haselbacher (Gerolsteiner) rider put the German into the barrier. Petacchi hit the front for his second stage win and Vainsteins pipped a fast finishing Freire. Nazon was’nt in the first ten, but he was in yellow, the first Frenchman for a long time to do that.