Best Of 2016 – Roadside: From Tour Village To Mont Blanc!

TDF’16 Roadside: Ed Hood made his yearly visit to the Tour de France and day two for Ed was a definite mountain day; riders off the front and riders off the back and PEZ friend Dan McLay was in the latter group. From the Tour Village Ed takes in the two main climbs of the day and all the excitement that comes with them.

‘What a Difference a Day Makes,’ the Esther Phillips song goes; yesterday we were sitting with Dan McLay in the nice cool Fortuneo-Vital Concept hotel asking about those four top ten placings in the first two weeks of le Tour and his prospects on the Champs Elysees. 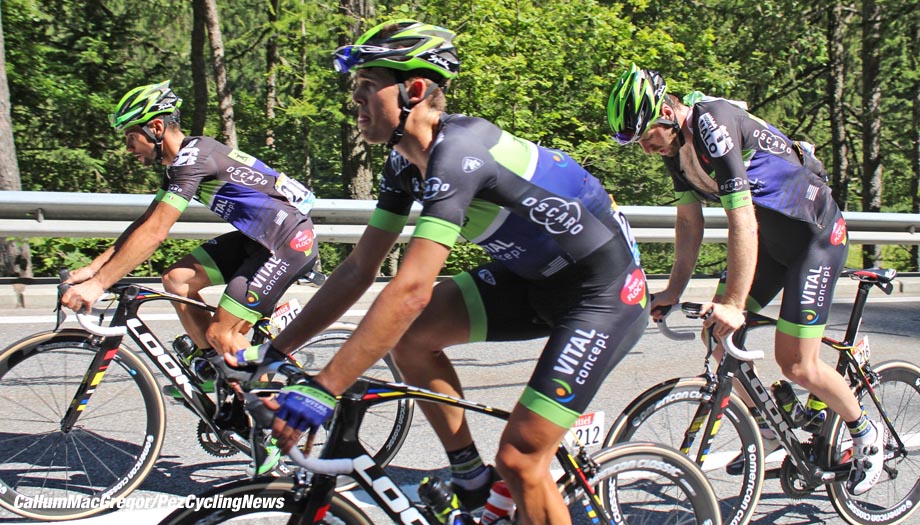 Today that robust, square shouldered frame of his isn’t the asset it is when battling out sprint finishes – not a couple of kilometers from baking hot top of the first Cat. Col de la Forclaz, 13 K @ 7.9% – and along with two of his domestiques, Breen and Fonseca they’re stone last. And there’s still the final horror climb to Finhaut-Emosson after this one. Jersey open the waist, out of the saddle Dan battles the grade, it looks savage. We feel his pain but all we can do is roar encouragement before we jump into our car, join the convoy and drive off the mountain. 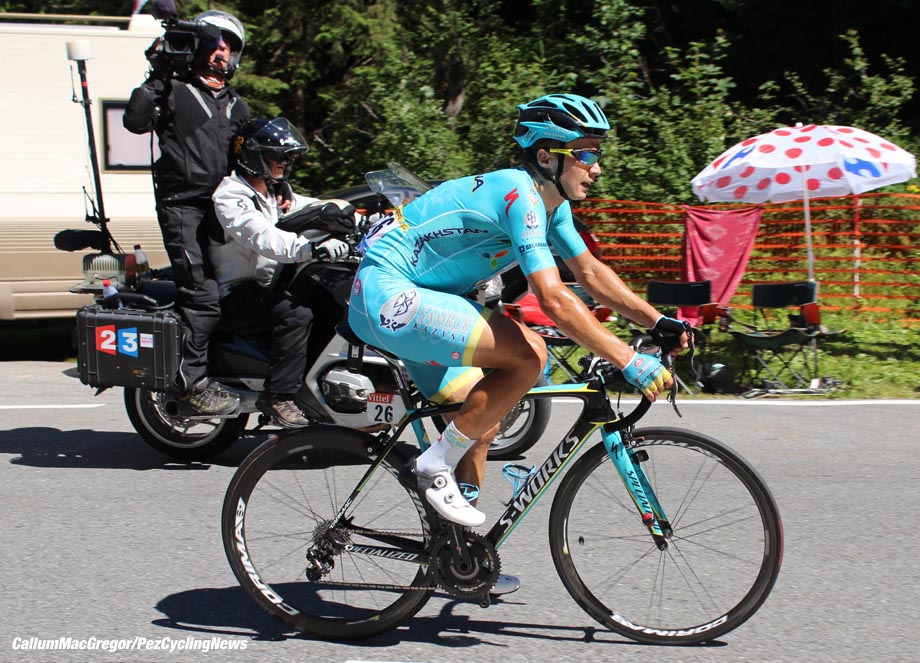 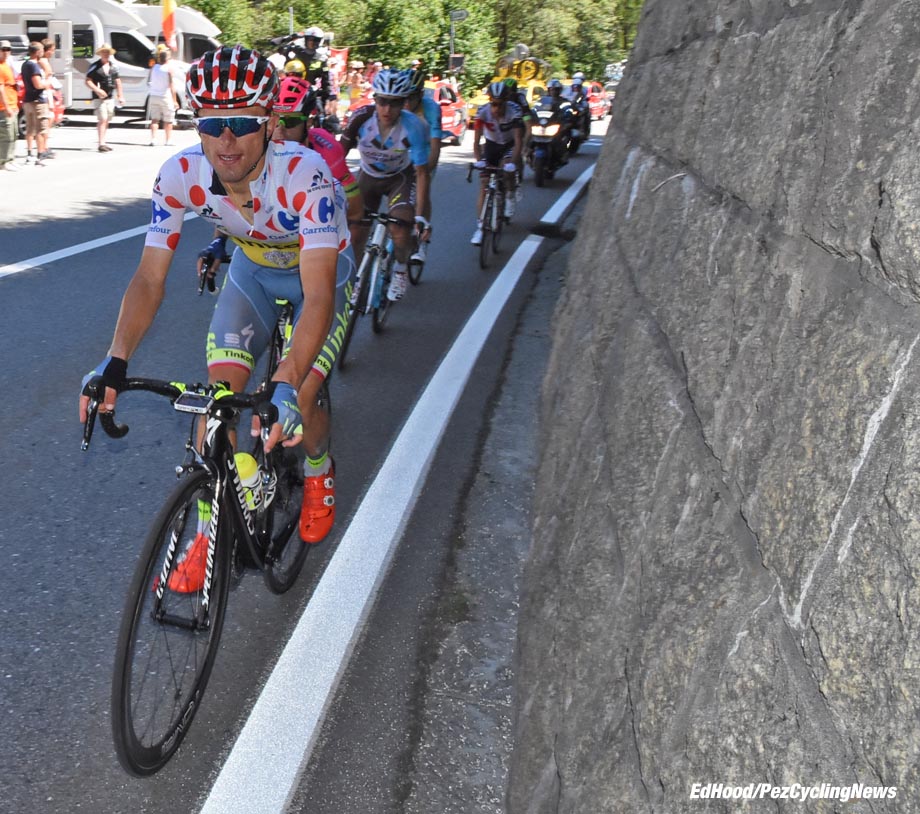 First up this beast was Lutsenko (Astana) but not by much, an IAM and Tommy V are in hot pursuit with maillot a poids Majka (Tinkoff) right there too and the man who had that horror crash in the Giro, Ilnur Zakarin (Katusha), Costa (Lampre-Merida), Pozzovivo (AG2R-La Mondiale) and another IAM – Pantano?

Then they come in ones, all had hoped this was their day – but it isn’t. 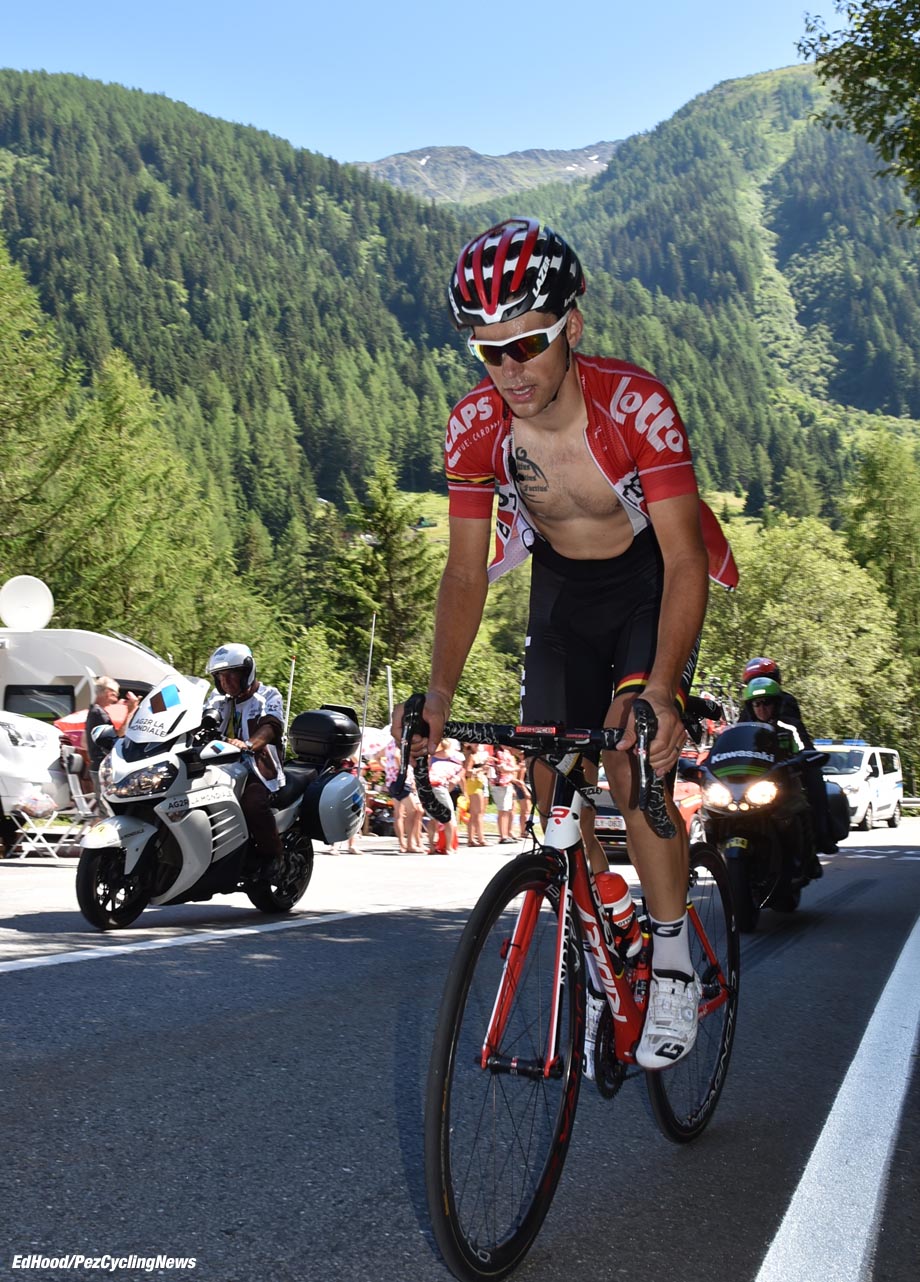 Tim Wellens (Lotto Soudal) is just off the pace, he was up the road with Lutsenko but has obviously run out of gas. 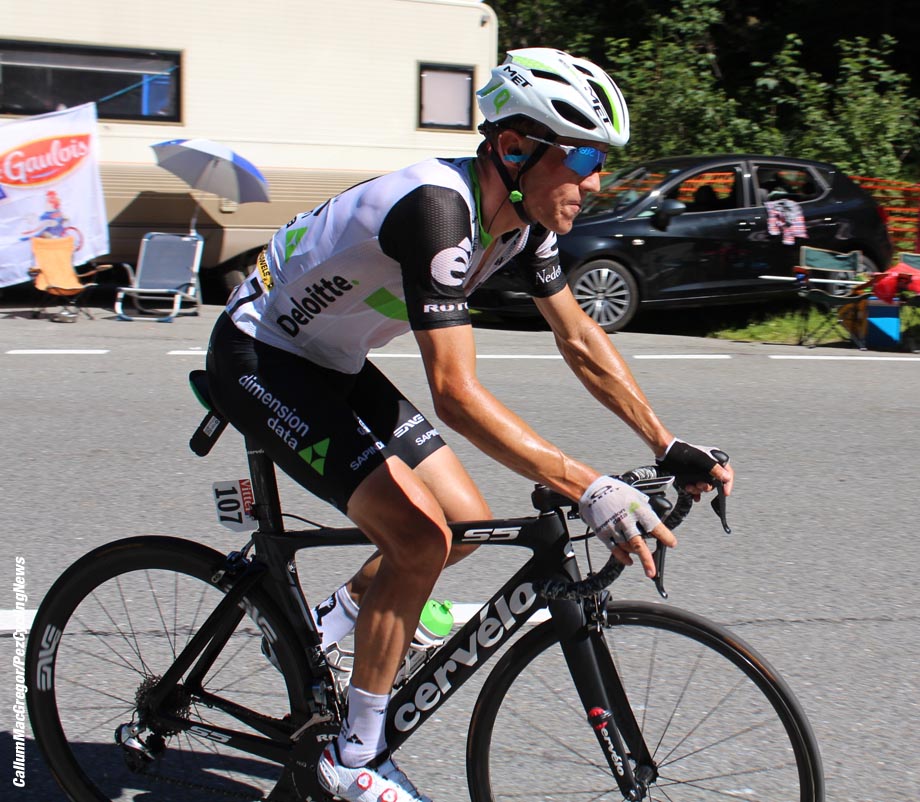 It’s a long way back to the Sky driven peloton where Geraint Thomas is on point. 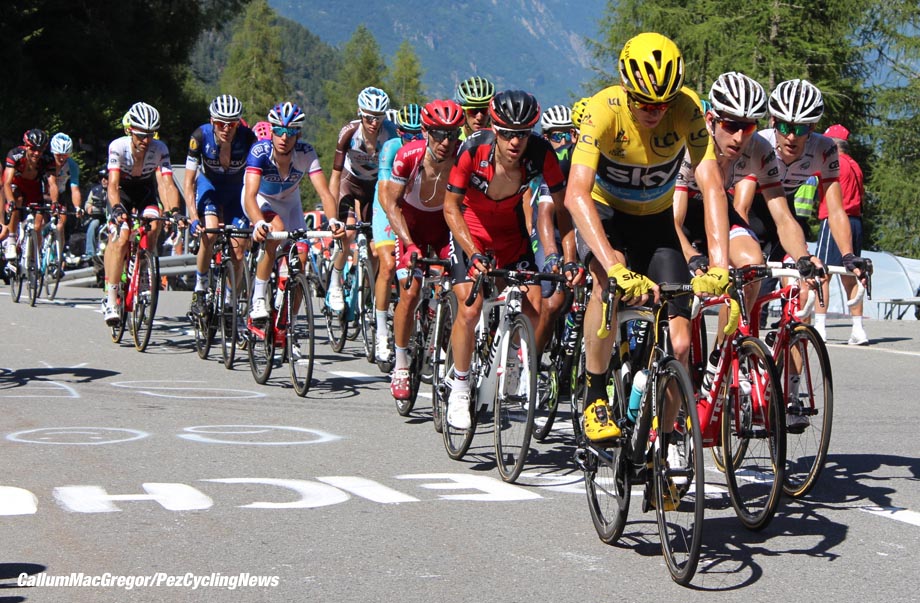 Froome is looking at his stem – as usual, barring disaster this Tour is won, it has been for days. 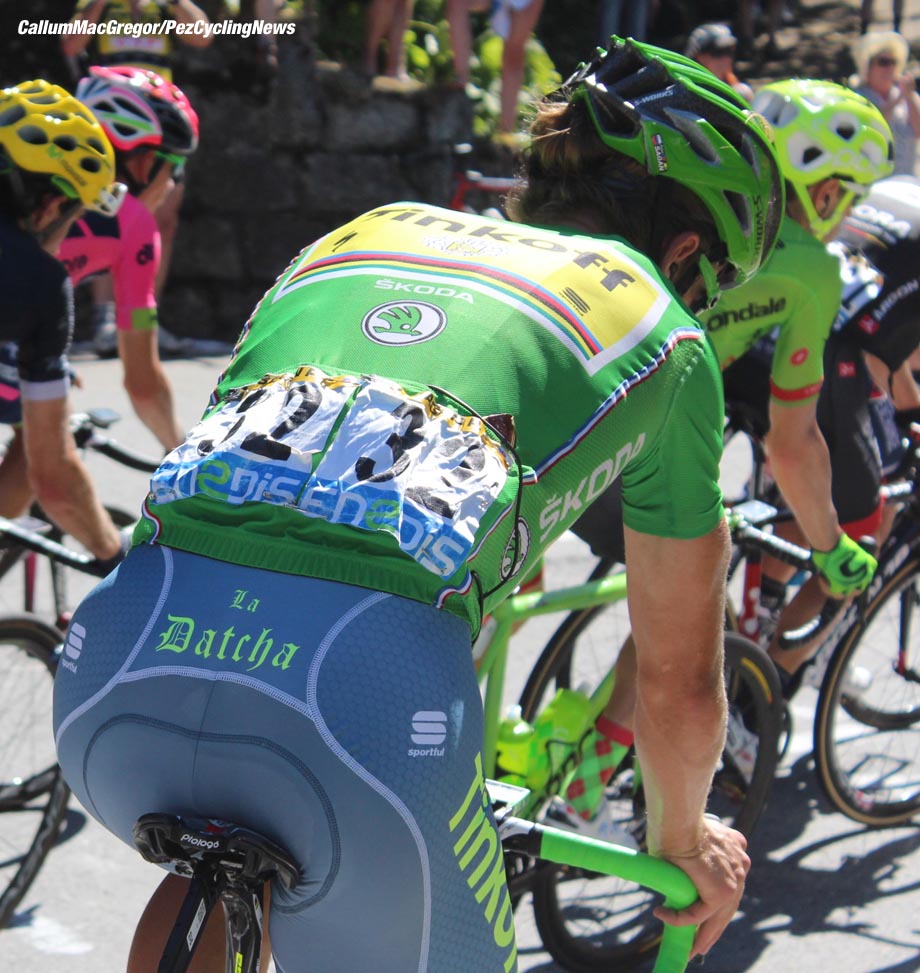 Sagan, remarkably is still with them but starting to slide back. Is that Tejay on his own, way out the back? 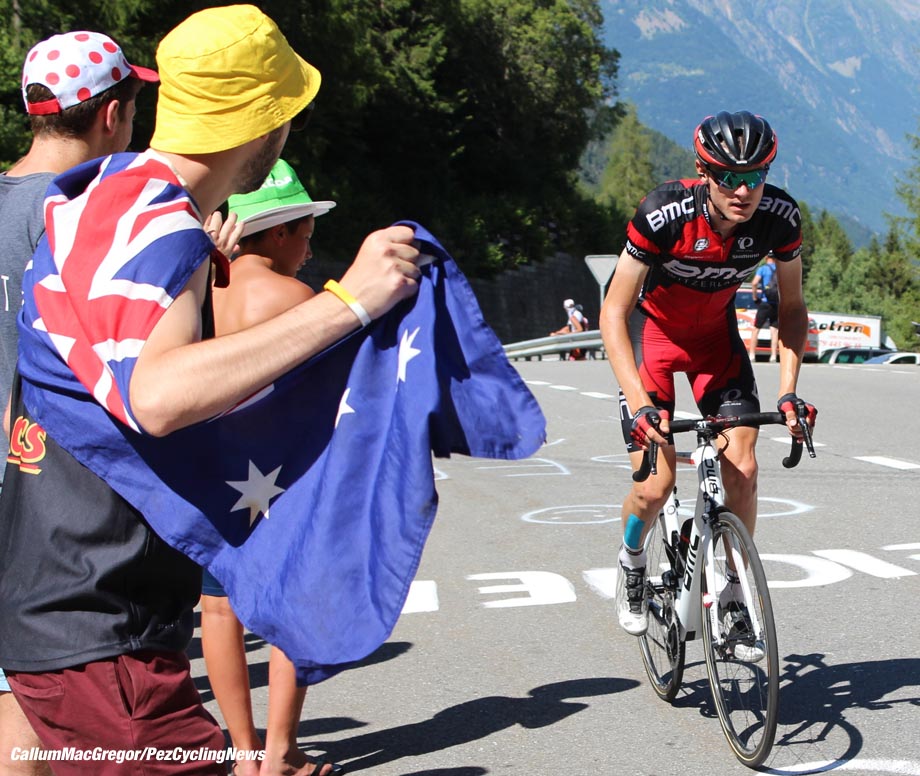 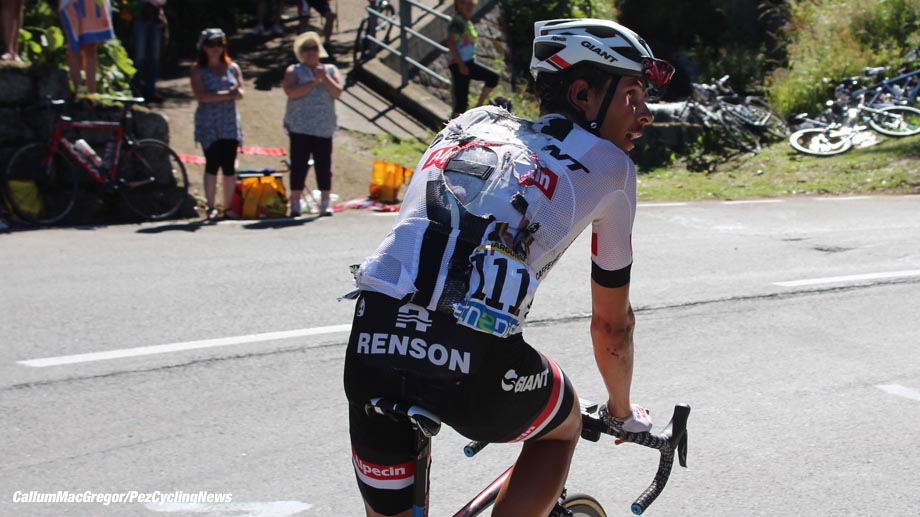 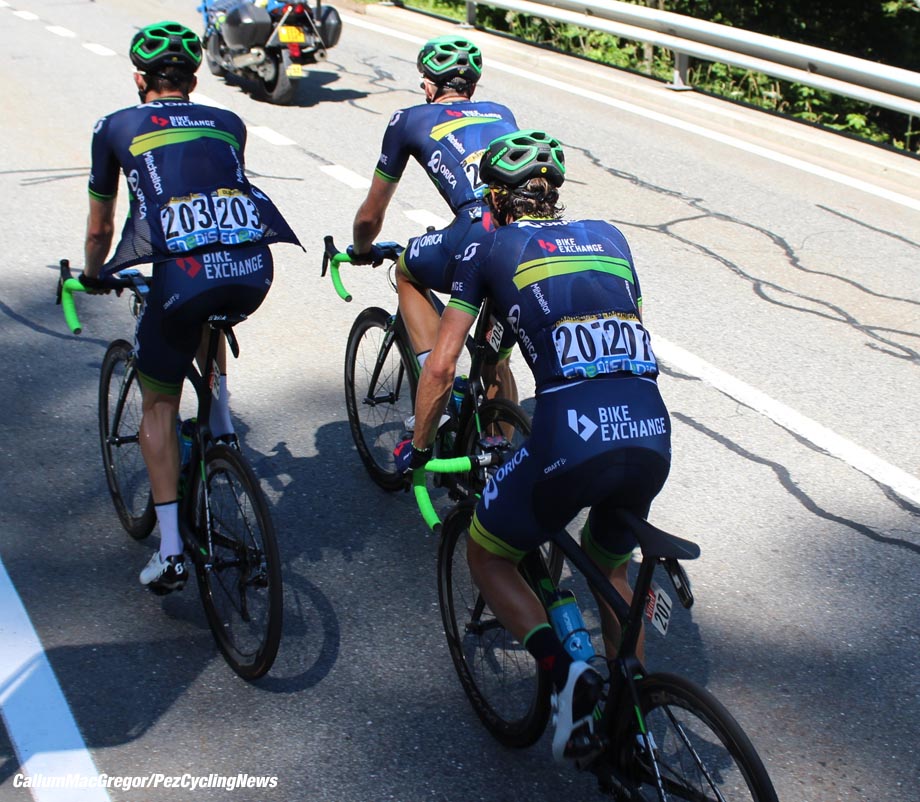 Then it’s the ‘men all over the mountain’ of folk lore, ones, threes, little groups; Barguil’s been on the deck and Matthews is HURTING. 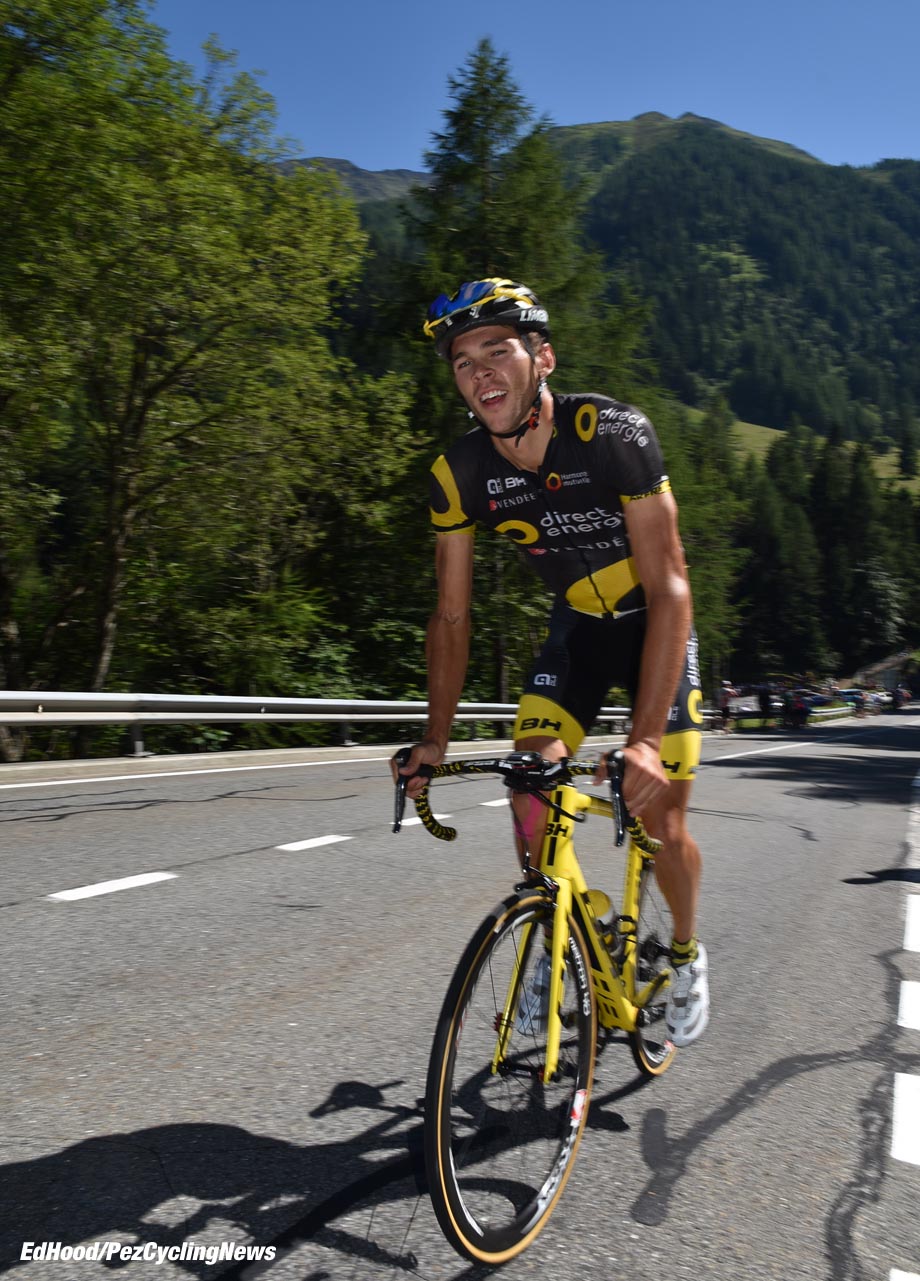 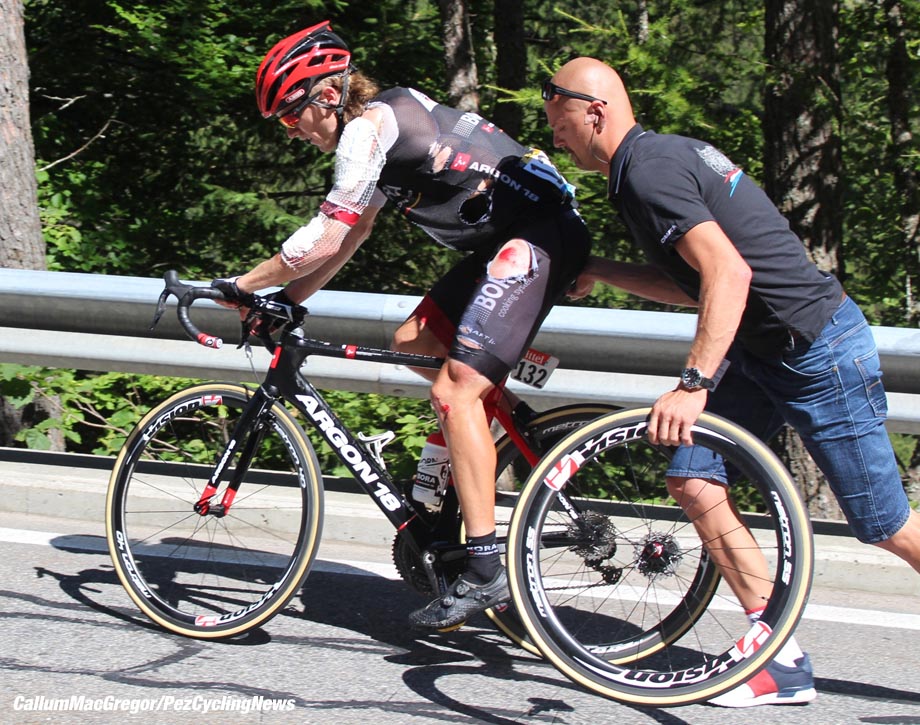 A Bora punctures, wheel change, he’s so wasted he can hardly get back on the bike, it’s our amigo, Shane Archbold Go Shane!

And then it was Dan and his amis. All we can do is hope he makes it before the cut.

We’d learn later that Zakarin won, Froome did what he needed to – as did Yates and it’s over for Tejay.

Some of the stages might have been a little ‘slow’ for TV but it’s been one interesting Tour de France albeit there’s been little doubt about who would win since the moment Froome pulled on the yellow jersey.

I had to drag Callum out of the start area this morning, the combination of Tour de France stars and tanned, leggy publicity girl was just too much for him. My mentor and cycling prophet, Viktor tells me that I spend too much of my time on le Tour in the village, eating cookies and drinking coffee. And I must confess that Callum and I did find ourselves at the controls of a coffee machine in the village – but not before we’d carried out the obligatory, ‘pester the mechanics’ drill. 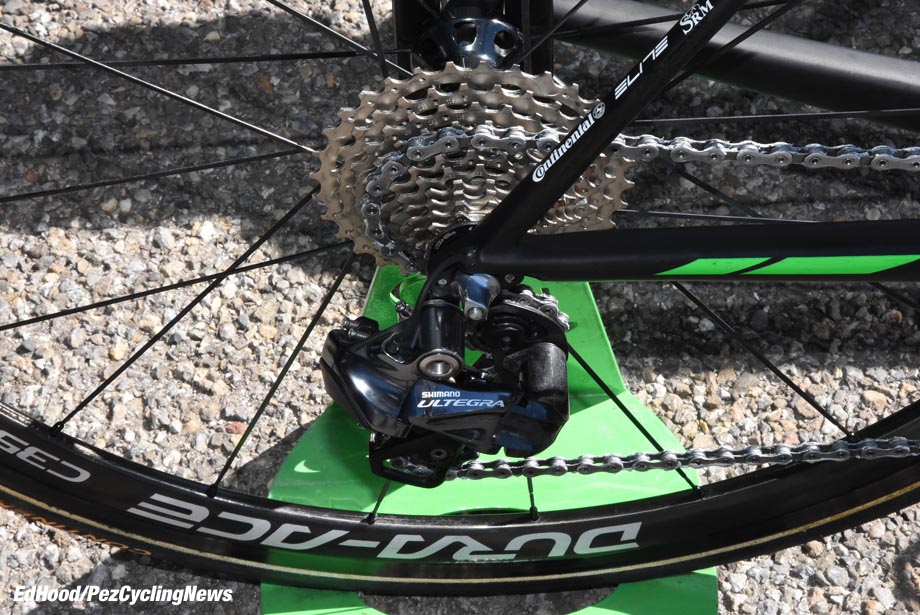 First revelation, Adam Yates was on a colossal 32 tooth sprocket; with an Ultegra electronic rear mech – you need the extended roller cage on the Ultegra mech to handle the big cogs. Meanwhile, over at Movistar our amigo and head mechanic – Thomas, ex of Euskaltel told us that Quintana and Valverde were on their usual 11 to 29 set ups. We also couldn’t help but notice that a lot of the Movistar riders are on dual pivot front brakes – generally they’re only fitted to the rear due to their extreme stopping power. 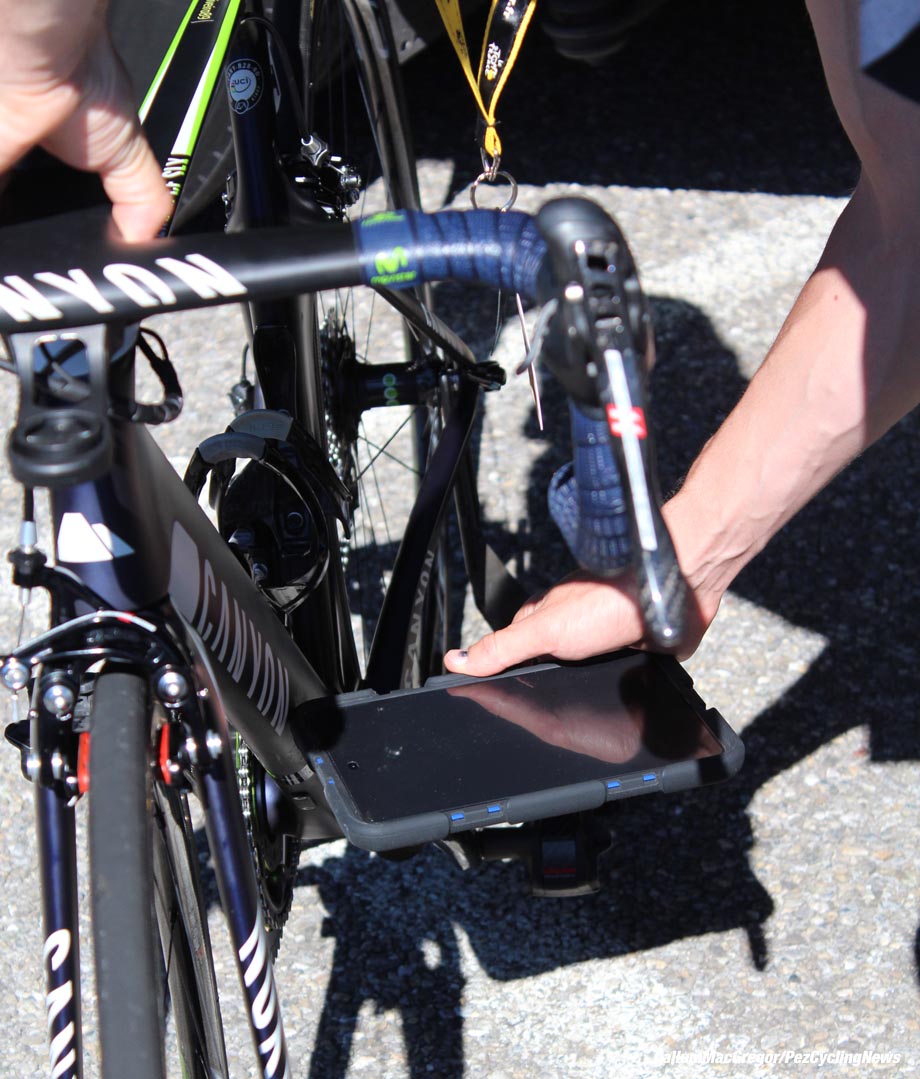 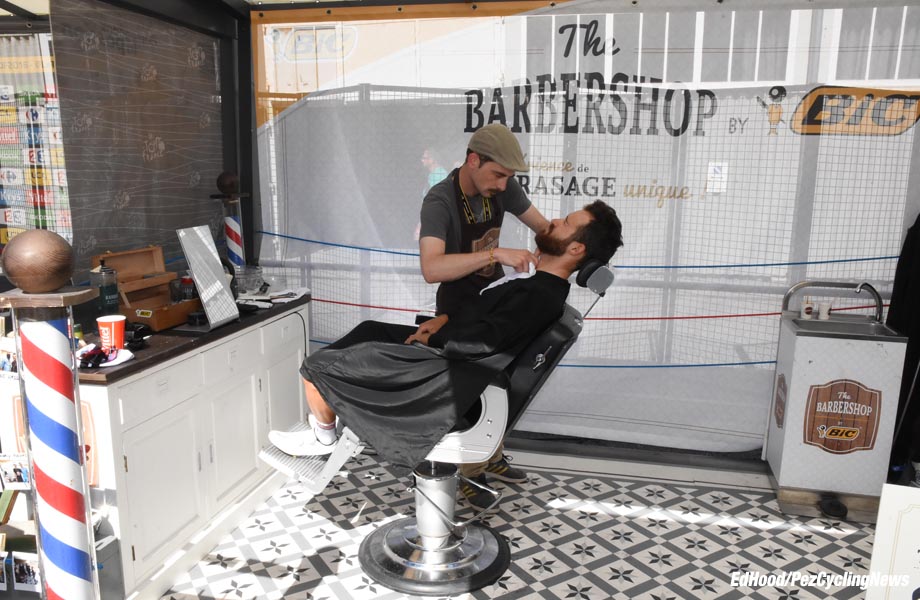 Less concerned with cogs, brakes and motors was last year’s winner at Pra Loup, Simon Geschke – a facial fuzz like that needs looking after.

We caught up with our big Amigo, Jean Michel Monin, he’s a former 1996 world and Olympic team pursuit champion who for the last 15 years has been the man in charge of the motorbikes on the race – but this year his driving a ViP car. 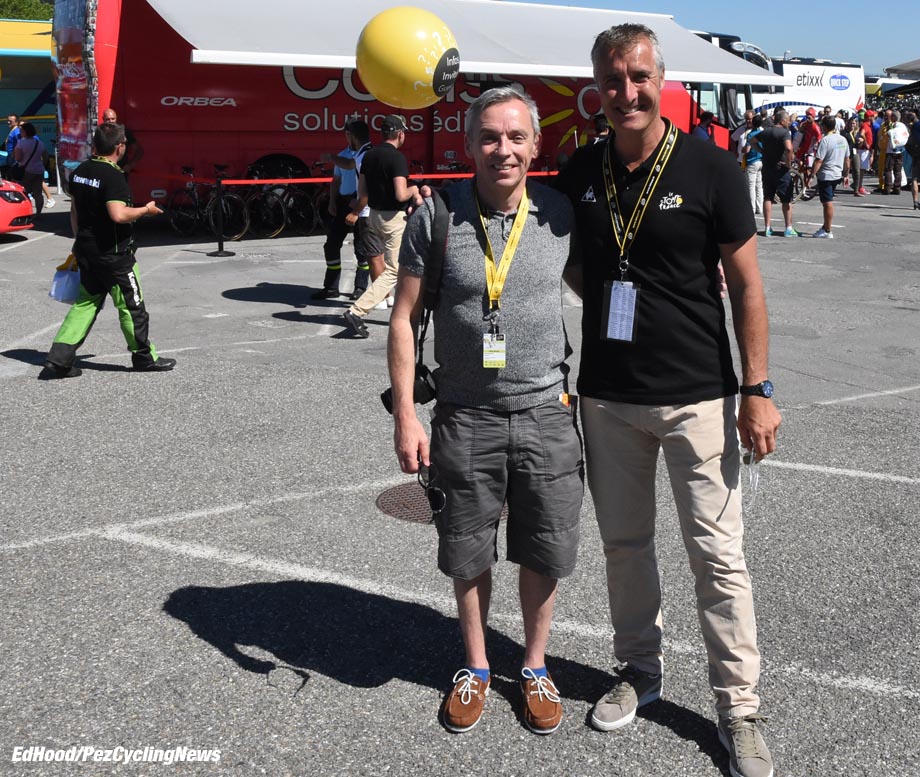 We asked about the Ventoux incident with Froome and he reckons it was down to a combination of circumstances:

* The wind made it too dangerous to ride the final six K to the summit.

* The wind also made it very difficult to get trucks to uplift and bring down the mountain the barriers which were already in place, further up the mountain therefore the organization only managed to barrier 600 meters down from the new finish line.

* The ‘public’ on the mountain were the same ones who frequent l’Alpe d’Huez – and there was A LOT of alcohol consumed.

All these factors combined to give a set of circumstances which caused the problems – but it’s certainly done no harm to Froome’s prospects. 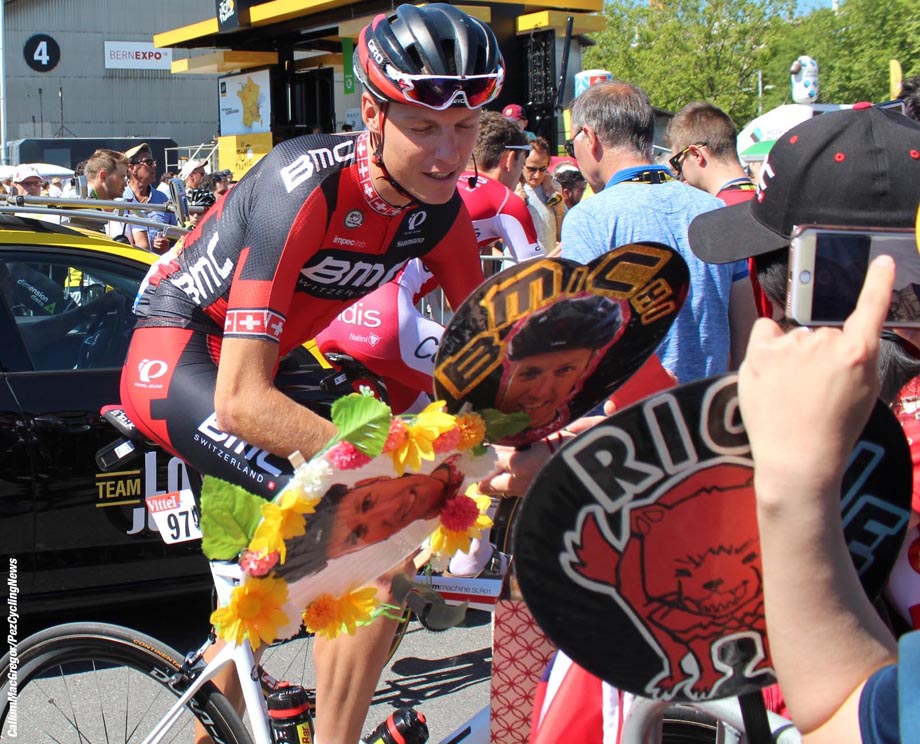 As I struggled to get us on the road, ‘Mickey’ Schar pulled up to talk to a young girl fan; it was hard not to be impressed by how nice he was to her – a real pro.

Today was perhaps the most picture post card perfect parcours, ever? 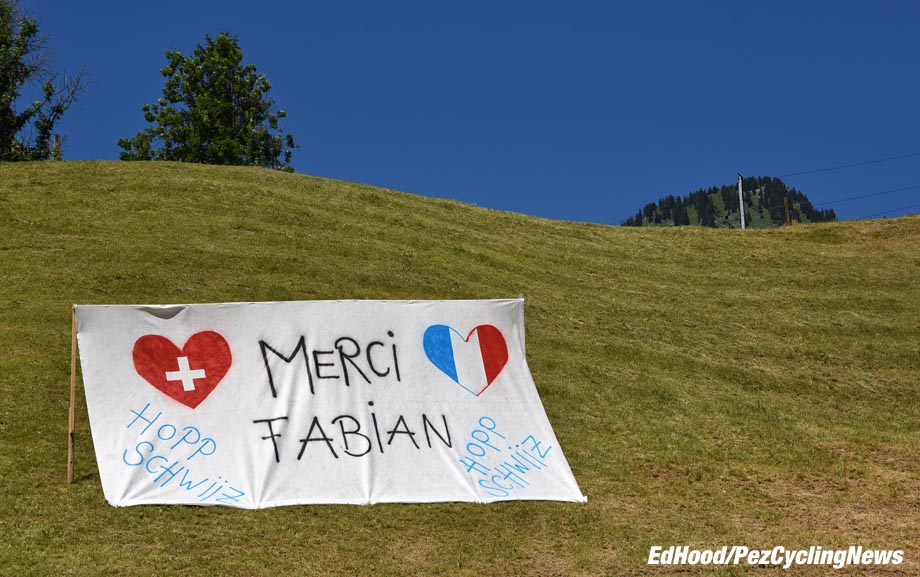 With even ‘thank you’ cards placed along the way…

From genteel, well manicured Bern along smooth tar across valley floors where each chalet out does the next for the place you’d most like to live. 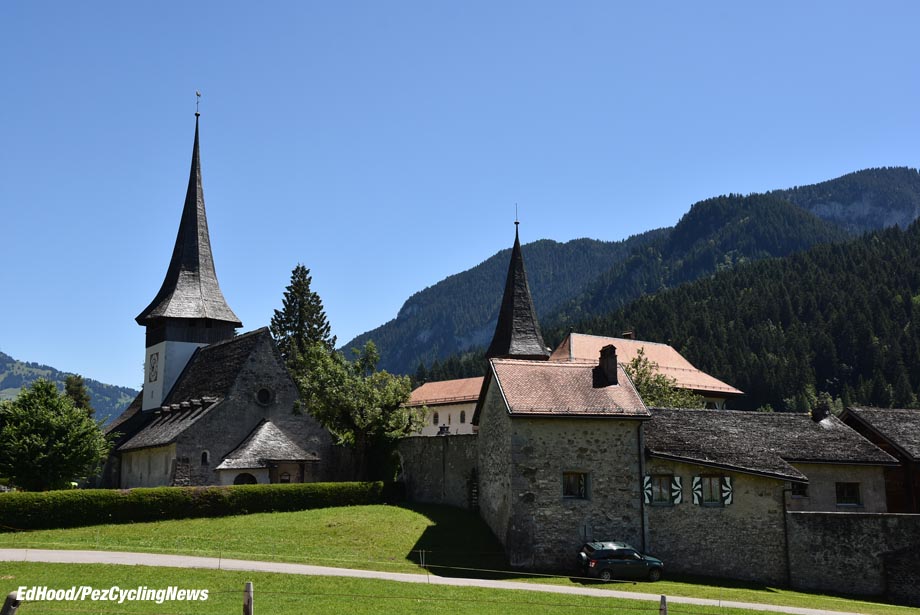 There were two third Cat. climbs along the way which weren’t too savage but it’s the third week, there are a lot of tired legs and some guys systems react badly, the day after a rest day. The descent off the second one, the Col de Mosses – where there was a lovely old Corvette Stingray at the top – was long and technical; ideal for getting back on – if you take the risks. 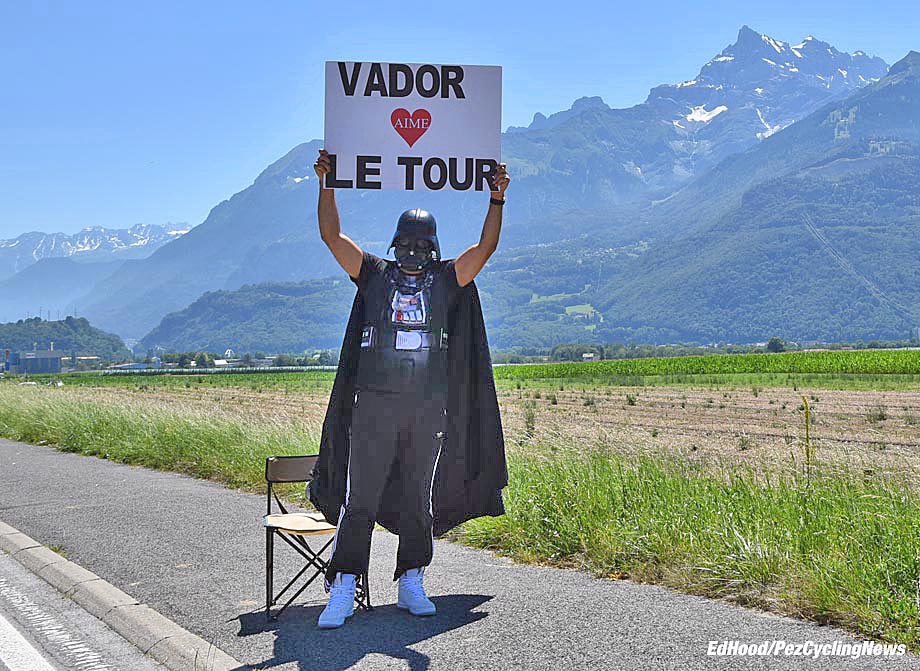 On the valley floor we felt a strange pressure on our necks; and the car stopped of its own accord – we had to promise the Dark Lord to publish his picture. But The Force is now with us…

Then we were on the Forclaz and we’ve told you about that already. 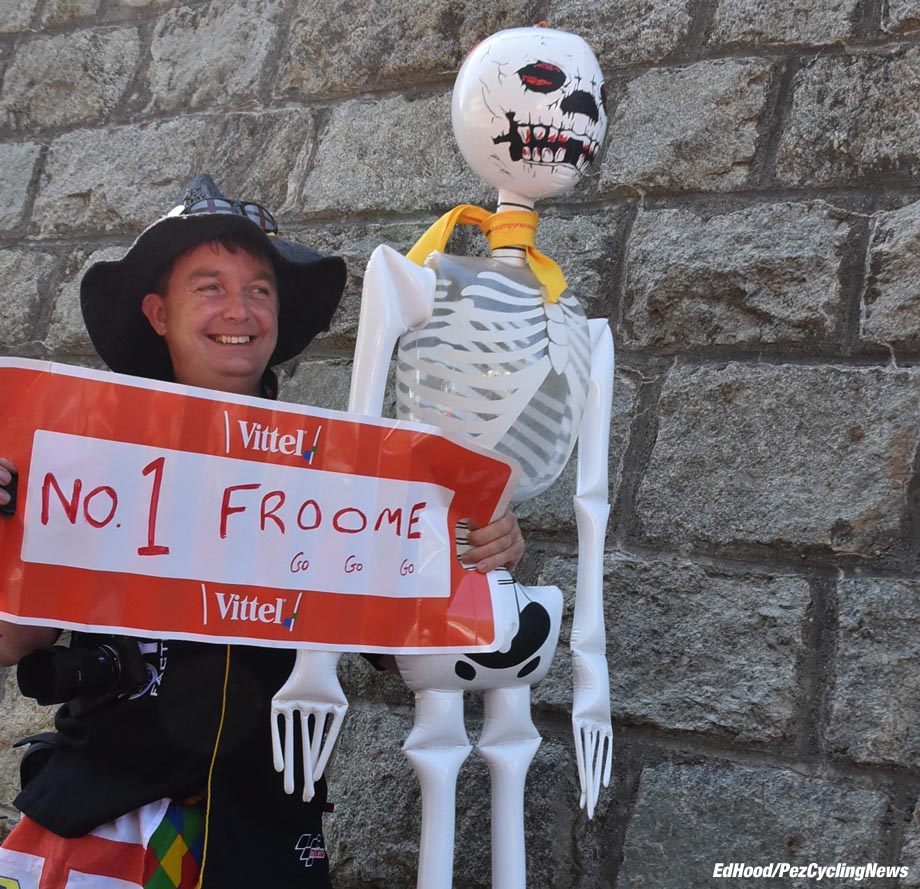 Froome firmly in charge, Yates must be thinking about that second step on the podium but the biggest deal?

Mountain test tomorrow, we’ll be there! 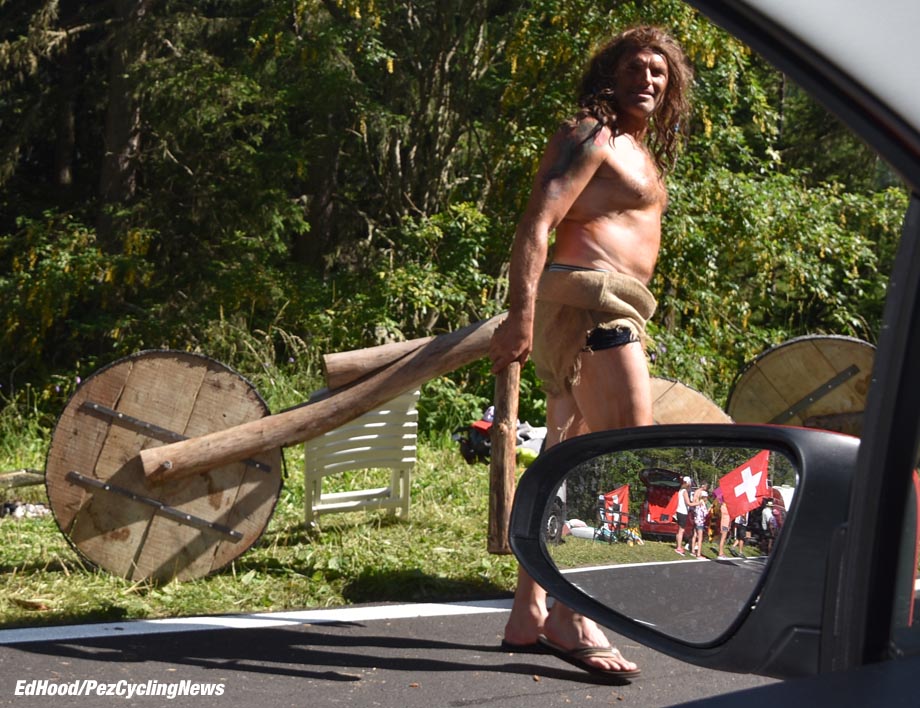 But what about those French fans, don’t they need to get more up to date?