Light-years behind the records of Eddy Merckx and nowhere as famous as the three other five-time winners of the Tour de France, Jacques Anquetil, Bernard Hinault and Miguel Indurain, a total of 67 riders have worn the yellow jersey for just one day (or even less) in their careers and exemplified the pursuit of excellence from a humble start. Back in 1986, Alex Stieda started his very first Tour with the very last race number in the peloton — 210 — pinned to his back. The Canadian surged to the top of the general classification in the first mass-start stage, beating LeMond to the punch to become the first North American rider to lead the Tour de France. 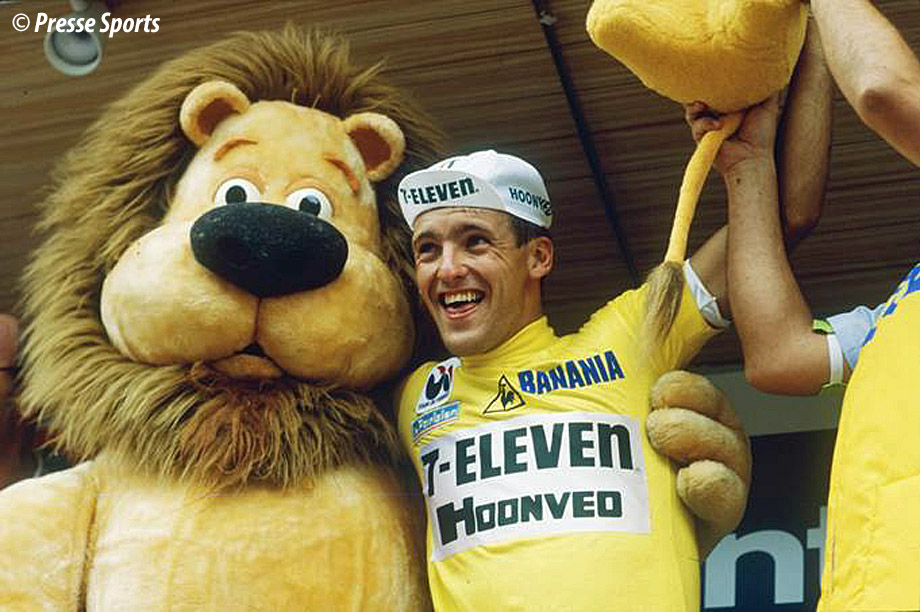 Cycling fans were still pondering several questions as the 1986 Tour got under way: how would La Vie Claire deal with the tension between Bernard Hinault, who was entering the race for the last time, and Greg LeMond, the rising star he had pledged to support? Would Lucho Herrera or Fabio Parra manage to take Colombian cycling all the way to the top and win the race outright? Would Système U and its leader Laurent Fignon be able to fish in troubled waters? Especially curious fans were also debating what 7-Eleven, the first American team to get a Tour de France wildcard, brought to the race. Some were looking forward to following five-time speed skating Olympic gold medallist Eric Heiden’s quest to finish the Tour de France, but only the most hardcore fans had ever head of Alex Stieda, whose only success to date had been a bronze medal in the Commonwealth Games.

The frisky young Canadian went on a solo breakaway in the very first mass-start stage, trying to manoeuvre himself into a distinctive jersey by grabbing “Catch” points along the way. The adventure also netted him a few bonus seconds and, even though he was eventually caught by another five men and finished fifth in Sceaux, behind stage winner Pol Verschuere, Stieda was still the best-placed rider in the general classification. The former medicine student hit a milestone in the globalisation of cycling, beating older and more famous cyclists such as Steve Bauer (then sitting in third place overall) and Greg LeMond to the punch to become the first rider from North America to wear the yellow jersey.

Hours later on that same 5 July, the joy of Alex Stieda and his 7-Eleven teammates turned to ashes in a calamitous 56 km team time trial between Saint-Quentin-en-Yvelines and Meudon. The team was knocked out of kilter by a crash and four punctures, one of which involved the yellow jersey, who was dropped and eventually crossed the finish line alone while his comrades posted the second-worst time out of 21 teams. While Stieda went from heaven to hell in one day, 1986 was a bumper crop for North America as a whole, with David Phinney claiming the first stage win for the continent in Liévin on the next day and, a couple of weeks later, the Stars and Stripes flying in Paris in honour of Greg LeMond as the first American to win the Tour de France.