Light-years behind the records of Eddy Merckx and nowhere as famous as the three other five-time winners of the Tour de France, Jacques Anquetil, Bernard Hinault and Miguel Indurain, a total of 67 riders have worn the yellow jersey for just one day (or even less) in their careers and exemplified the pursuit of excellence from a humble start. Back in 1987, Jean-François Bernard was taking part in his second Tour, the first one as the leader of Toshiba-La Vie Claire, when he added the yellow jersey to his race number 1 after a colossal performance on the slopes of the Mont Ventoux. However, things were about to go pear-shaped… 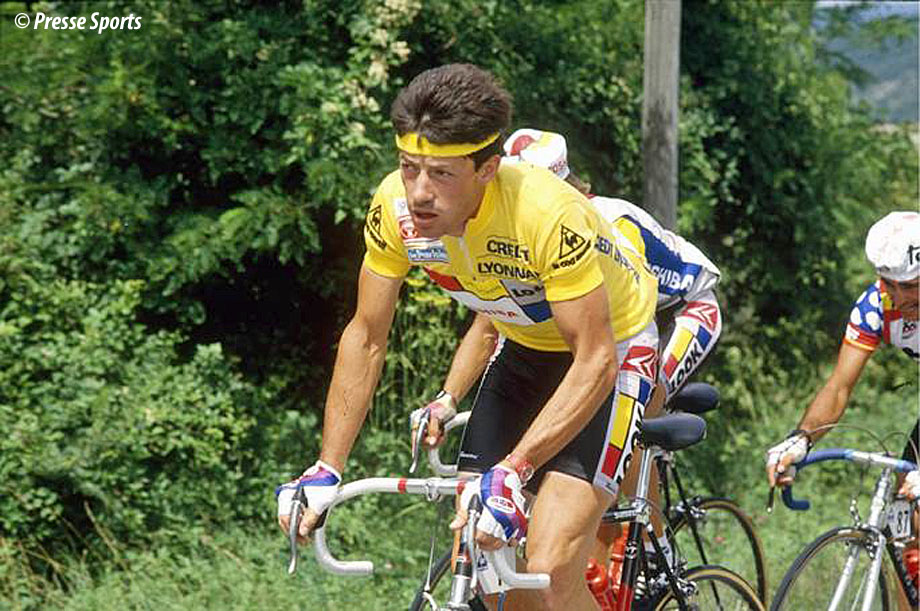 French cycling fans were looking for references in summer 1987. Bernard Hinault had just hung up his bicycle and Laurent Fignon was out of shape, while those who had fallen in love with Greg LeMond, an American with a lot of French character, in 1986 were left disappointed after a serious hunting accident forced him to sit out the race. The Tour had “changing of the guard” written all over it, with riders such as Charly Mottet, Pedro Delgado and Stephen Roche as the main favourites. However, it was another contender who burst onto the scene in stage 18, a gruelling time trial on the Mont Ventoux coming right after a rest day. It was a performance that turned Jean-François Bernard from an outsider into a hero: Hinault’s former lieutenant crushed the best power riders in the flat section between Carpentras and the foot of the mountain and then left the Colombian mountain goats in the dust on the slopes of the Giant of Provence. Jean-François Bernard’s stellar performance evoked memories of Charly Gaul, who had also won a time trial to the summit of Mont Ventoux, and turned him into the new leader of the race and the odds-on favourite to take the yellow jersey all the way to Paris.

“Bernard à la Hinault”, read the provocative headline in the next morning’s edition of L’Équipe, harking back to Bernard’s glorious origins and auspicious future. In his column in the newspaper, Pierre Chany wrote about the young Burgundian’s leap forward: “This rider who has just proved to be one of the favourites to win the race on the Champs-Élysées with this dazzling performance, maybe even the top favourite, showed in just under an hour and a half that he knows perfectly how to amalgamate his talent and the animalistic fire that burns within all extraordinary riders, without which talent means nothing or almost nothing.” However, Bernard was still not in the clear, with Roche, Mottet and Delgado within less than 4 minutes and four Alpine mountain stages left before the finish.

In the next stage, the yellow jersey suffered a series of setbacks that his rivals did not hesitate to use to their advantage. It all began with a puncture right before the Col de Tourniol, about 100 km from the finish in Villard-de-Lans. “It was insane: I had a flat, it got fixed and I got back”, explains “Jeff” Bernard, evoking the bitter memories of that day. “After that, bottlenecks formed in the feeding zone and then my chain came off on the Col de la Bataille. I was going crazy. I managed to hold on at 1′, 1′30″, until I just gave up 10 km from Villard-de-Lans after chasing for 90 klicks. I had nothing left in the tank.”

Bernard’s ordeal cost him 4′16″ to the stage winner, Pedro Delgado, and put him 1′39″ behind the new leader, Stephen Roche. Even winning the Dijon time trial on the eve of the finish in Paris was not enough to put him back in contention, and the Burgundian had to settle for the bottom step of the podium in the 1987 Tour de France.