A Day in Yellow: Jean-Pierre Genet

Light-years behind the records of Eddy Merckx and nowhere as famous as the three other five-time winners of the Tour de France, Jacques Anquetil, Bernard Hinault and Miguel Indurain, a total of 67 riders have worn the yellow jersey for just one day (or even less) in their careers and exemplified the pursuit of excellence from a humble start. Jean-Pierre Genet, one of Raymond Poulidor’s most loyal domestiques, went from finishing dead last in the 1967 Tour to taking the yellow jersey at the start of the 1968 edition. 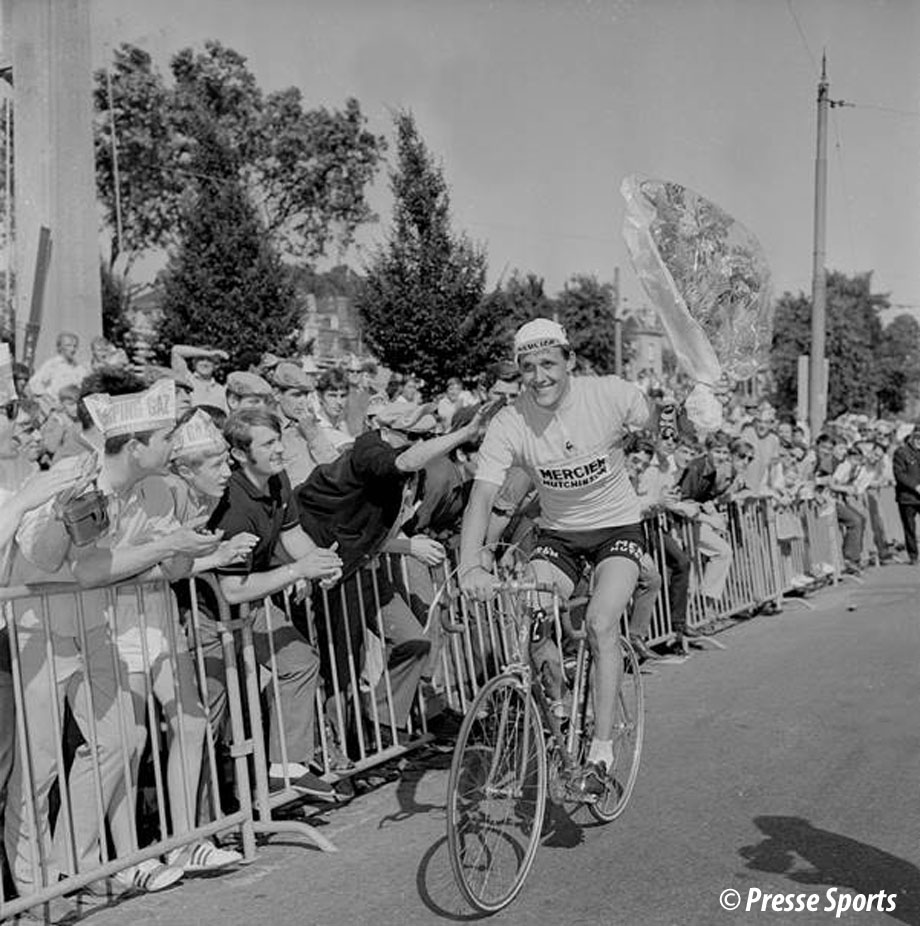 Back in 1968, Raymond Poulidor was still in the first half of his Tour de France career, but with a few weeks to go before the start of a race he was touted to win, the book Poulidor, or Glory Without The Yellow Jersey could already be found in every bookshop. Even though this edition was the last hurrah for national teams in the Tour, the ties forged throughout the season remained strong in the peloton, with “Poupou” receiving the support of some of his teammates in Cycles Mercier. One of them, a 1.83 m and 78 kg giant known as Jean-Pierre Genet, was as unconcerned about the general classification as he was hard-working and devoted to his leader. He had served Poulidor in every spring campaign since 1964, helping him to three podium finishes in the four previous editions. In 1967, Genêt had even dragged his wounded, aching body all the way to Paris, finishing dead last in the general classification (78th).

The Belgian and French teams carved up the first few stage wins after the Grand Départ in Vittel. As the peloton headed to Rouen on the fourth day of racing, Poulidor’s lieutenants at Mercier were on top of things. Jean Stablinski blew up the race going into the final third of the stage, only to be caught by a counter-attack including riders such as George Chappe and Jean-Pierre Genet. The rider from Marseille and the man from Brest worked well together and shared the spoils on 1 July: Chappe took the stage win by pre-empting the sprint, while the 3′26″ gap to the peloton was enough to catapult Genet past Van Springel and into the yellow jersey.

“Until now, he was a water carrier. From now on, he will play a more glorious role, with its fair share of trials and tribulations, as a gold carrier”, waxed lyrical Jacques Goddet in his column in L’Équipe the next day. Multiple articles in his newspaper hailed a self-effacing rider who offered his perspective on serving as a domestique: “I’ve always stayed true to my commitments and friends. I’ll freely admit that, some years, when I looked back, there were a lot of regrets and not a lot of money, but it turns out I was right to keep going at it. I got my reward, so I’m happy.” The first half-stage of the next day started at 7 am and took the peloton to Bagnoles-de-l’Orne. Sporting the ephemeral nickname Bouton d’Or (“Buttercup”), Genet had returned to his usual role by the end of the morning, surrendering the yellow jersey to Georges Vandenberghe… but another triumph awaited in the shape of a stage win in Saint-Étienne two weeks later. Genet would remain a “Poupou” man through and through, supporting his leader in every Tour de France campaign until the last one in 1976.