Light-years behind the records of Eddy Merckx and nowhere as famous as the three other five-time winners of the Tour de France, Jacques Anquetil, Bernard Hinault and Miguel Indurain, a total of 67 riders have worn the yellow jersey for just one day (or even less) in their careers and exemplified the pursuit of excellence from a humble start. Back in 2016, Mark Cavendish, who had claimed virtually every honour available to sprinters bar the yellow jersey, was finally rewarded for his patience. 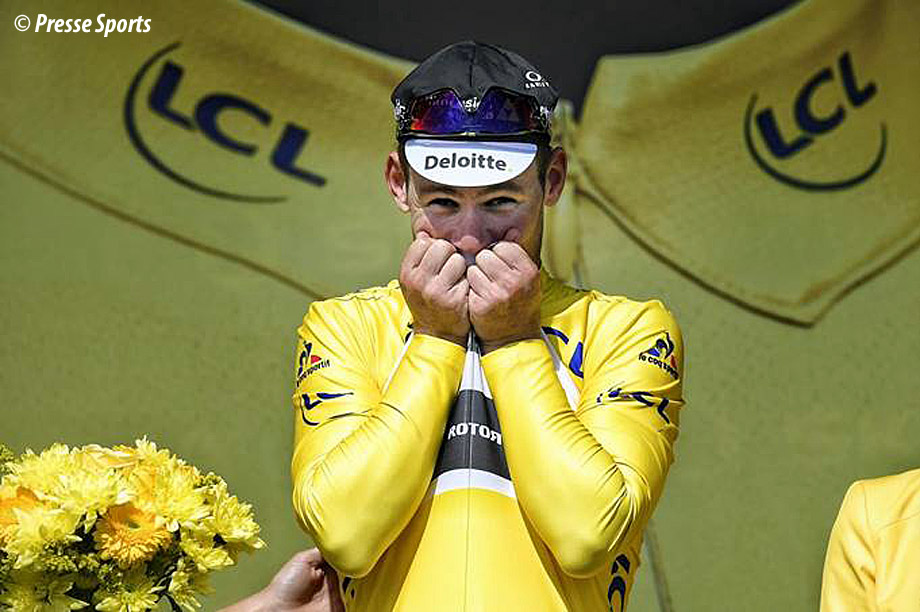 From time to time, the Tour de France puts the yellow jersey within reach of the sprinters with a flat opening stage in which the fastest men in the peloton can go toe to toe in a mad dash to the line, allowing riders such as André Darrigade and Rudi Altig in the 1950s and 1960s, as well as Mario Cipollini, Thor Hushovd and Marcel Kittel in more recent years, to wear the golden fleece for a while. Mark Cavendish, on the other hand, went into the 2016 Tour with 26 stage wins to his name and a history of near-misses with the yellow jersey. Although he had already pulled on the leader’s jerseys in the Giro and the Vuelta, the rainbow jersey after winning the 2011 Worlds, the green jersey in the 2011 Tour and the British champion jersey, the most coveted one of them all seemed to evade him. Some near-misses had been outright painful, such as the stage on home turf in Harrogate that had kicked off the 2014 Tour.

By the time that the race featured another flat opening stage two years later, the majority of pundits were adamant that the rise of riders such as Kittel, Sagan, Kristoff, Greipel and Matthews had closed the window of opportunity for “Cav”. Yet the Manx Missile fired again on Utah Beach, one of the scenes of the D-Day landings, beating Marcel Kittel by two bike lengths to take his 27th career stage win and the first with Dimension Data. Writing in the next day’s edition of L’Équipe, Philippe Bouvet explained how “It is a childhood dream come true for the sprinter from Isle of Man, who also made amends for the frustrating experience in Harrogate two years ago, when he missed out on the yellow jersey in front of the royals”.

It had been a long, long wait, but Cavendish had finally got his hands on the yellow jersey in his tenth Tour start. Other riders have had to bide their time for even longer: Henk Lubberding only found out what it felt like to lead the Tour in his 12th start (1988), while Alberto Elli finally got a taste of yellow in his 11th start (2000) and, like Cavendish, Sylvain Chavanel also had to wait until his 10th Tour (2010). 24 hours later, Peter Sagan, just as prolific but nowhere near as patient as Cavendish, toppled the Manxman and pulled on the yellow jersey for the first time after winning the stage to Cherbourg.

More information about the Tour de France on www.letour.fr/en/