Light-years behind the records of Eddy Merckx and nowhere as famous as the three other five-time winners of the Tour de France, Jacques Anquetil, Bernard Hinault and Miguel Indurain, a total of 67 riders have worn the yellow jersey for just one day (or even less) in their careers and exemplified the pursuit of excellence from a humble start. Romain Feillu’s stint in yellow, limited to about 40 minutes in the time trial stage around Cholet in the 2008 Tour de France, was as short as it was intense. 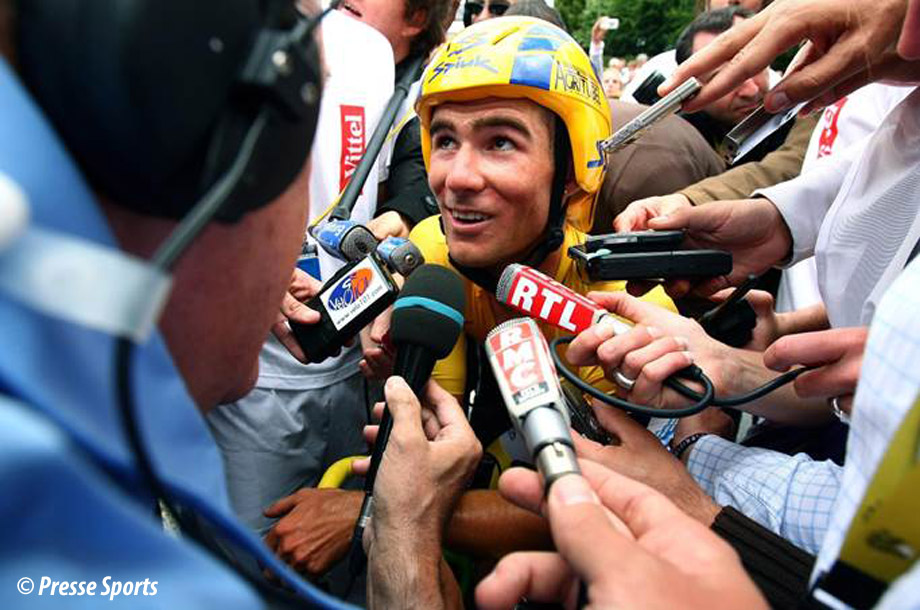 Back in 2008, there was no clear favourite to win the Tour, even though a duel between Australian Cadel Evans and the Luxembourgish Schleck Bros. seemed the logical outcome. France was having trouble finding leaders who could challenge the big names and waiting for the next generation of mountain goats and fast men to rise. Unable to tackle the world’s best climbers and sprinters head-on, many French riders tried their luck in breakaways instead. Shortly after the start of stage 4 from Saint-Malo to Nantes, American William Frischkorn attacked and took Italian Paolo Longo Borghini, Samuel Dumoulin and Romain Feillu with him. Caisse d’Épargne only mounted a half-hearted defence of Alejandro Valverde’s yellow jersey, raising the four men’s hopes of bringing their adventure to a successful conclusion. In the end, it was Dumoulin, then riding for Cofidis, who came out on top in the dash to the line, while their two-minute gap to the peloton was more than enough to make Romain Feillu the new overall leader.

Despite spending almost the whole night awake,
replaying the events of the previous day,
he savoured every minute of his ride in the yellow jersey

Feillu, still a young sprinter at the time, quickly moved on from the lost opportunity to win a stage and basked in the glow of the yellow jersey, especially after spending most of the season bedridden due to a bout of toxoplasmosis. “I was thinking about it all the time”, he said after pulling on the coveted garment. “Wearing the yellow jersey was something that only happened in my wildest dreams. As a kid, I used to watch Indurain and LeMond. Sure, I didn’t take it in a mountain stage, but even getting it in a flat stage is pretty awesome.” Feillu had just become the first French rider to wear the yellow jersey since Cyril Dessel two years earlier, but keeping it for as long as Thomas Voeckler in 2004 seemed out of the question.

The next stage was a 29 km time trial around Cholet in which the Agritubel rider appeared to have a snowball’s chance in hell of holding out against the Tour favourites. These long odds did nothing to curb the new leader’s enthusiasm and, despite spending almost the whole night awake, replaying the events of the previous day, he savoured every minute of his ride in the yellow jersey. There was to be no fairy-tale ending, however, and Feillu finished the time trial far behind Stefan Schumacher, who won the stage and took the yellow jersey, only to be later stripped of these honours following a positive doping test. History will remember Feillu as one of the most ephemeral leaders of the Tour de France, with 40′43″ in yellow, only a bit longer than Patrick Sercu in 1974 (11 minutes in the 9 km team time trial in Harelbeke) and another Belgian, Philippe Gilbert, in 2011 (25 minutes in the 23 km team time trial around Les Essarts).