Roadside Report: The Team BMC & Bora-Argon18 press conferences are contrasts, that would probably be an ideal situation for an aging party king – the day starts off early in what resembles a nightclub, and ends a hundred feet up in the air with some hi-tech gourmet cooking. Not my regular Friday … but then, it’s a long time since I could ever dream about calling myself a nightclub god.

An organized start:
A civilized 11am. The BMC team press conference is meticulously planned out, which helps to avoid the usual chaotic free-for-all scrums that can masquerade as a Tour press call. The riders get some easy warm-up 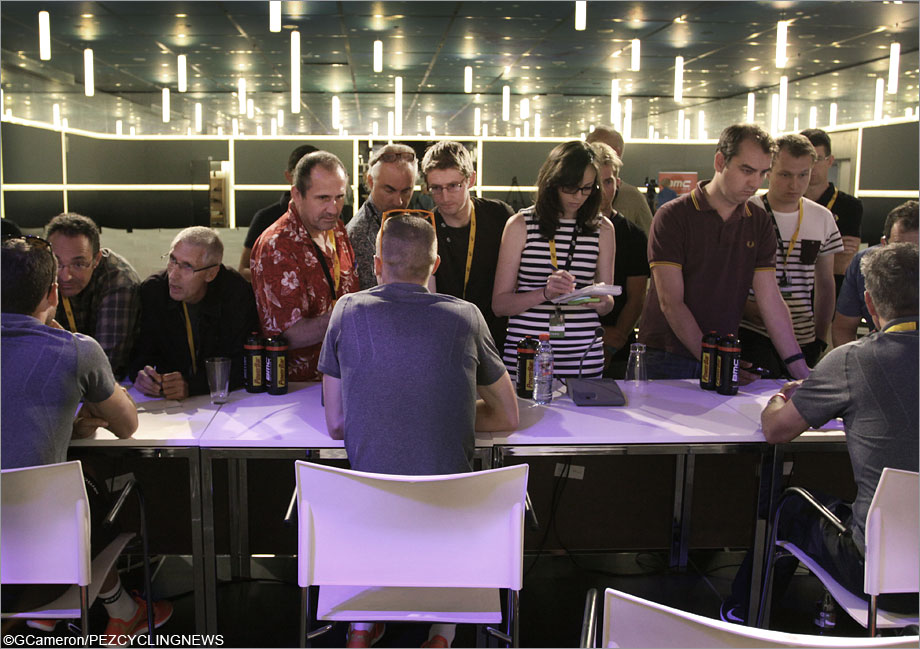 questions before the floor is opened.

The room for the presser looks a bit like something out of Tron, lots of fluorescent light strips along the floor and walls, and an almost-astral scene on the ceiling. Georges Lüchinger asks for the disco spotlights to be turned off, and we get down to business. 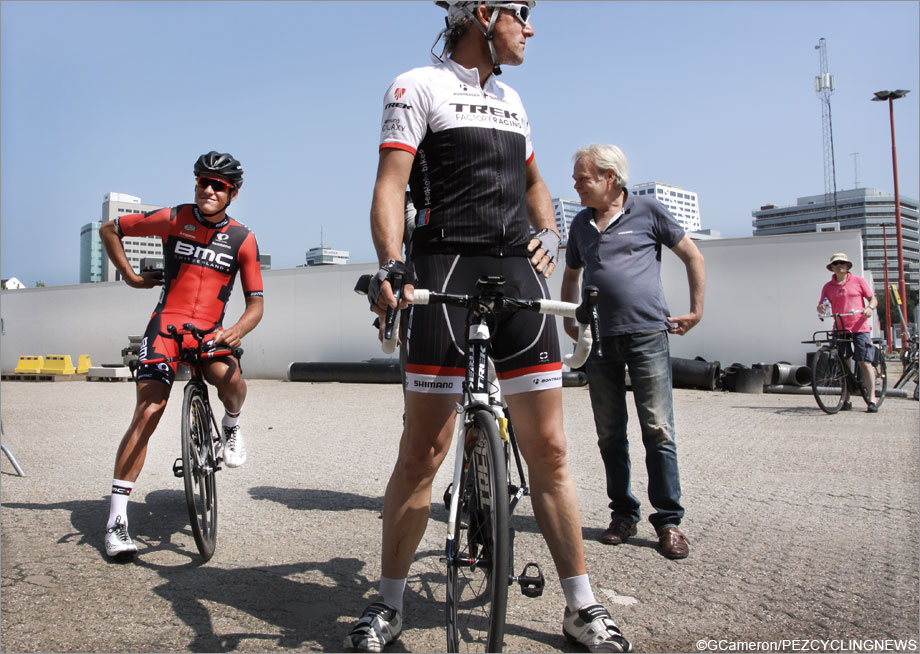 Then the English language media get Tejay Van Garderen and Rohan Dennis; the Swiss get Micky Schar and Danilo Wyss; the Italian cohort get Manuel Quinziato, Daniel Oss and Damiano Caruso. For the Belgians, and there were plenty there, we had Greg Van Avermaet, with Sammy Sanchez for the Spanish journalists. 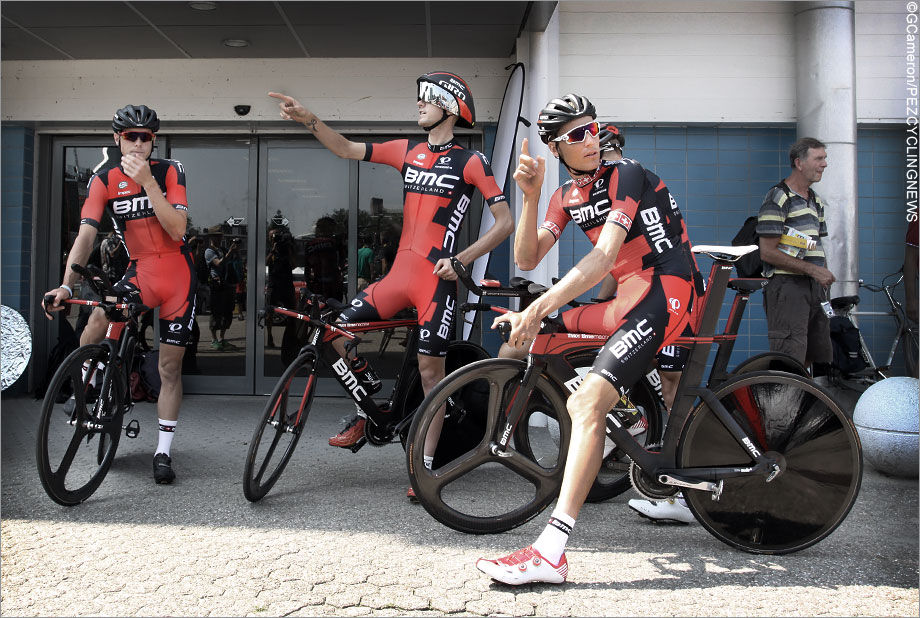 Jim Ochowicz says that the plans for Tejay van Garderen at the 2015 Tour started almost as soon as last year’s race concluded. As one of the few teams competing that has actually won the Tour, the podium is the priority, the focus on getting safely through the first week is paramount. “This is a team that can handle all obstacles … Tejay can go head-to-head with anyone in the peloton,” says the BMC boss. 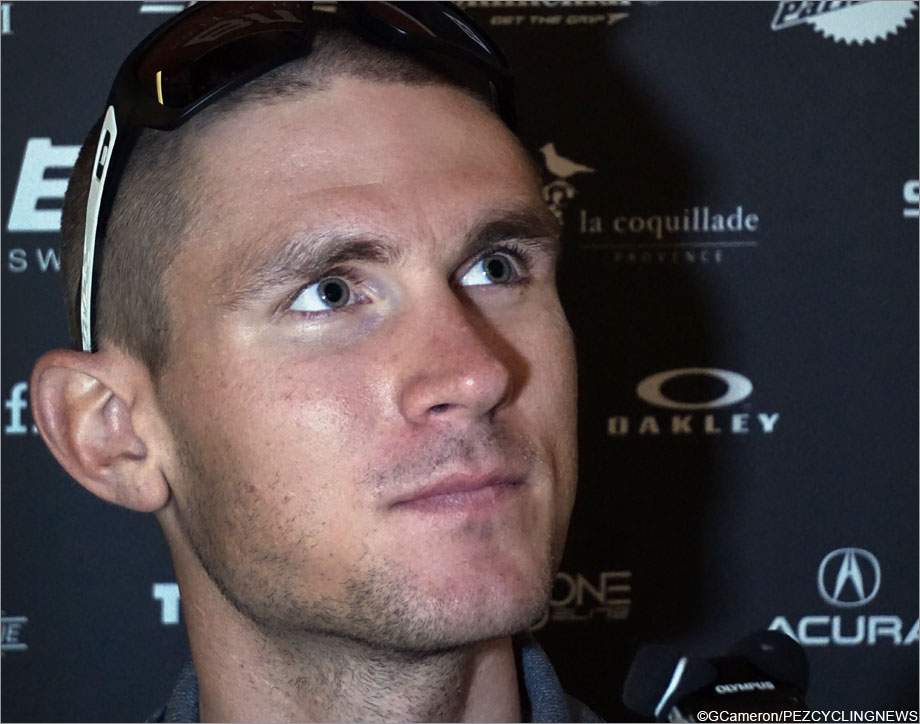 Once the formal part of the process is over, I catch a few words with the charming and well-rounded Quinziato, a music-loving rider with a lot more about him than most. 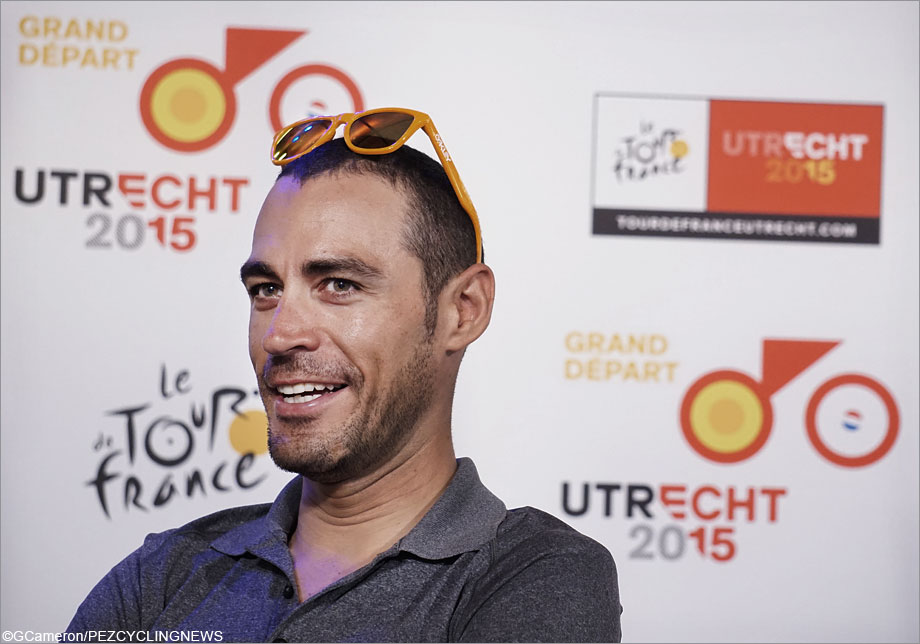 “You know, if you can’t be a little bit nervous about to start the Tour, then there is something wrong with you.

“We have the time trial tomorrow, then the second stage we could have a lot of cross-winds on the coast. The third stage already, you have the Mur de Huy; the fourth stage we have the cobbles … the first week is always stressful.”

“Everything is motivation for the race. We have a great team, a strong leader. Everyone on the team has the clearest idea about what they have to do. You can be either a winner, or someone who helps to make a win. There is no use to us if we have someone fourth in the sprint. We are looking to Tejay who is a big leader, and a big leader is motivating.” 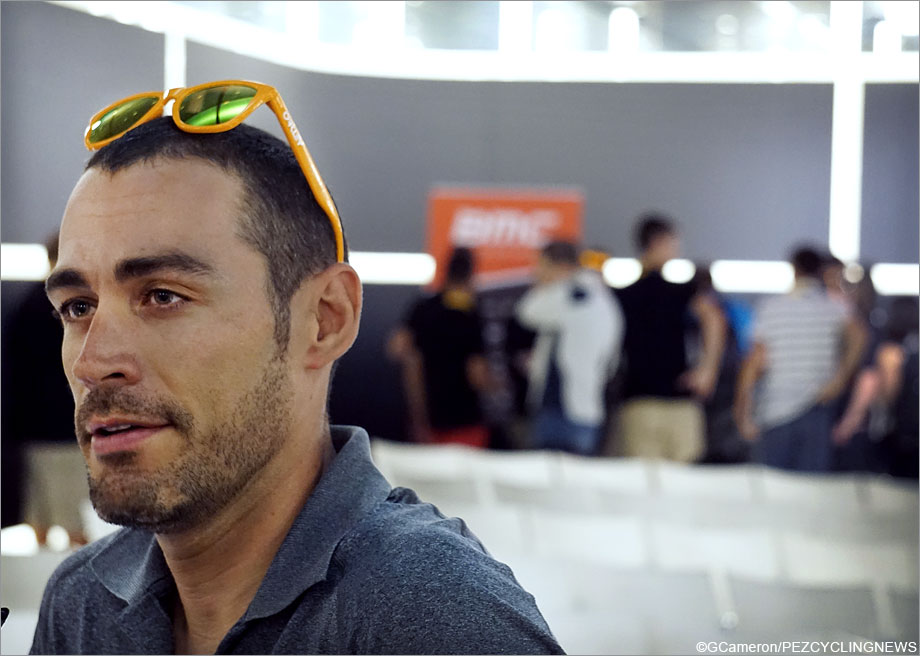 Quinzi is respected as a big engine and a crucial element in the functioning of BMC; before that he rode with Basso and Nibali at Liquigas. He’s been a guy who tends to stay with teams. That suggests how highly he is valued.

“I can be happy with that. I feel for sure I spent so many years in one team because they are happy with me. I’m not a winner, but I’m a pretty good helper. It’s when a leader is delivered that we can raise our hands in victory.” 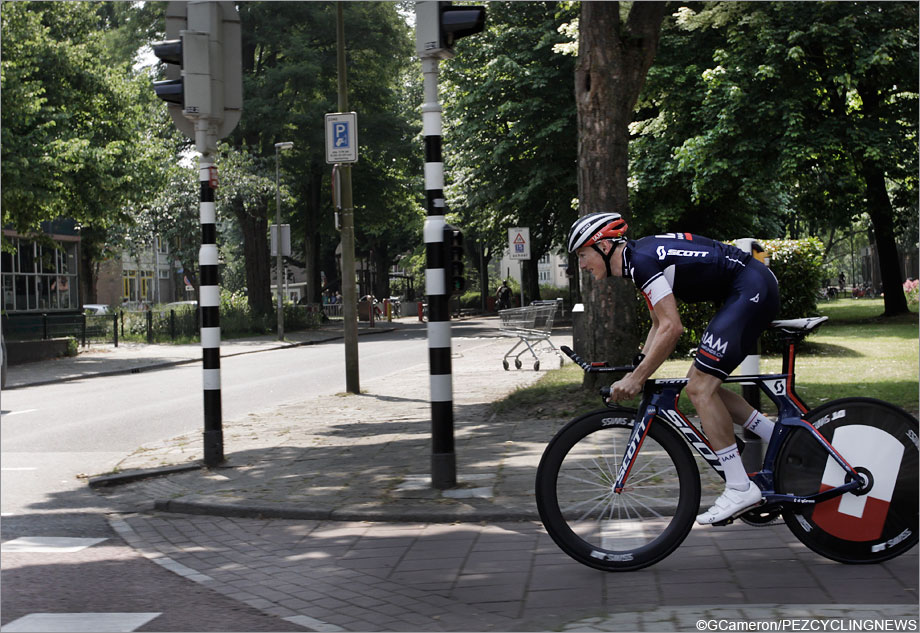 We keep pace with the IAM boys as they pick up a posse of followers, rolling along beside tomorrow’s TT course. We’re looping through Utrecht, heading for the Oud London Hotel and the Bora-Argon 18 cooking demonstration.

The German-backed team are returning to the Tour after Leopold Konig’s strong showing last year; as NetApp-Endura they made a good impression, and now it’s a new sponsor combination on the shirt. German kitchen systems and Canadian bikes. 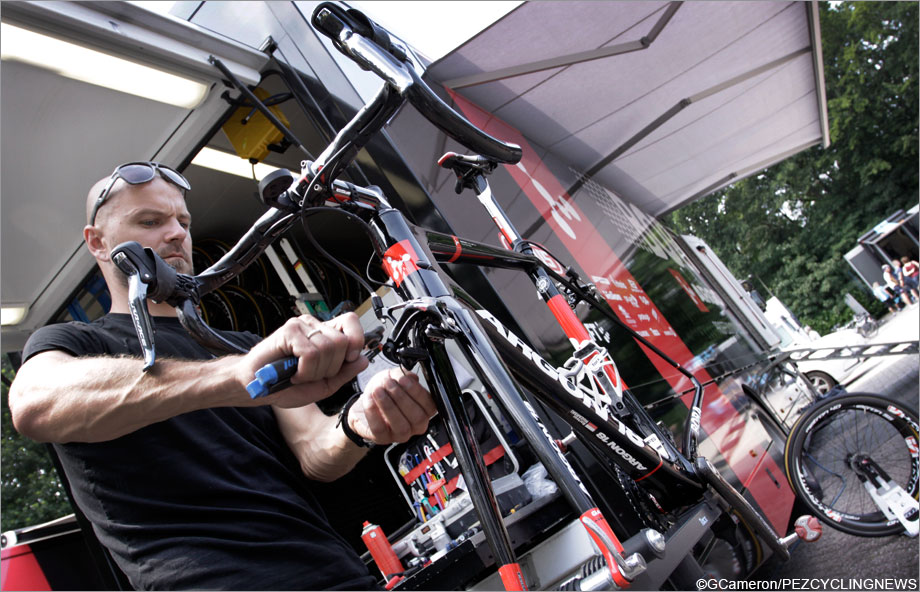 For 2015, they have Dominik Nerz, to lead the team. Barely old enough to miss the cut-off for the young rider’s classification, the German has been getting solid results for years, even if he’s been lower down the pecking order at Liquigas and BMC.

I have a chat with Bartosz Huzarski: “It’s a big deal, you know. Every rider in the world wants to go and start the Tour de France. It’s the biggest and most important race in the world. It’s a pleasure to be here with the team to show the jersey, to show our sponsors and our partners. It’s an honour. It’s important for us for sure.”

“There is always pressure. If there is no pressure for the general classification, there is the pressure for stage wins or to go in the breakaway. It’s cycling and every small detail, every small success is important. For the sponsors and for the team we want to participate as well as possible.” 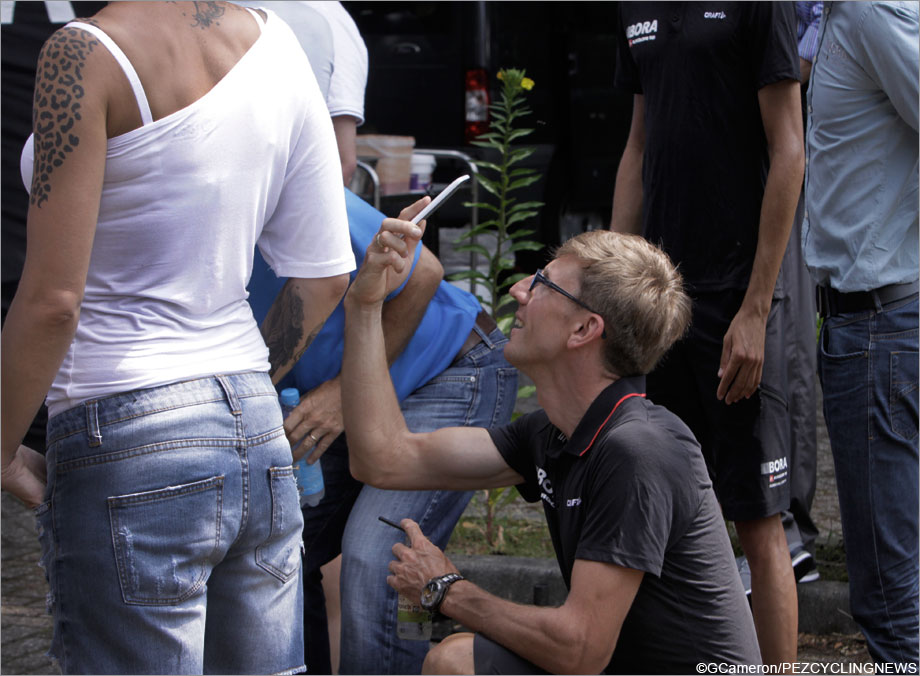 “Today we don’t feel the pressure, tomorrow maybe a little bit. But from Sunday, it’s going to be a really hard three weeks starting, and I hope we’ll do well.

The nutrition is the most important thing; our food is our petrol, so what we eat and how healthily we can eat helps how we can participate. 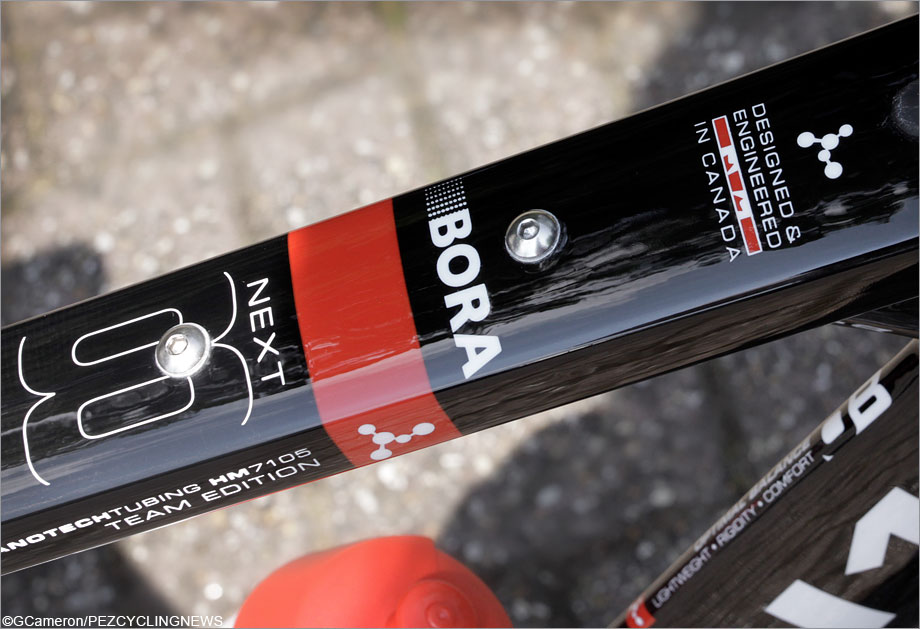 To have a partner like Bora, one really focussed on the best nutrition and the best process of food preparation, it’s really important. Compared to the last three or four years, we really feel the difference in the food with our new chef. It’s important that the team cares about the nutrition … not every team has a cooking system like we do, but that’s our advantage.” 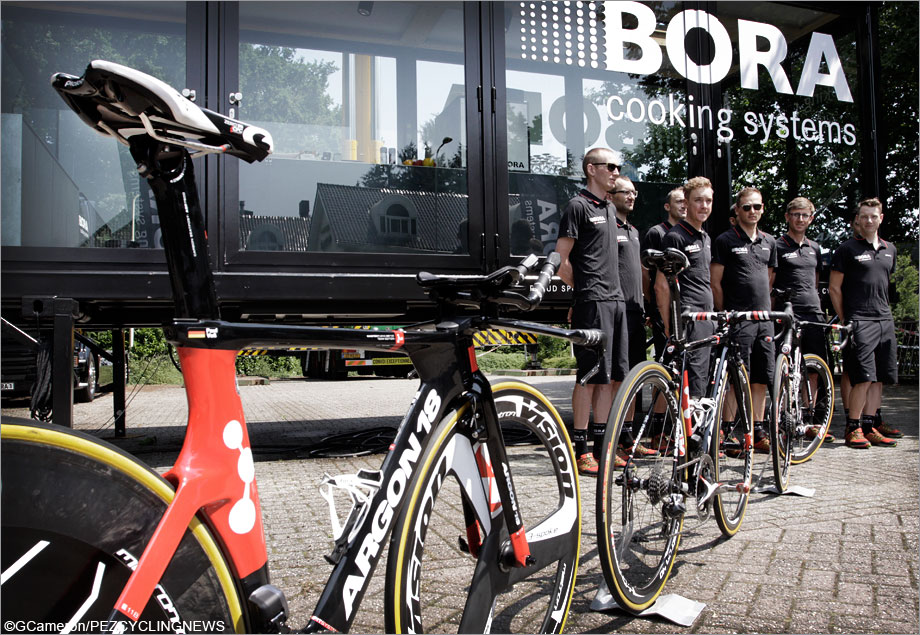 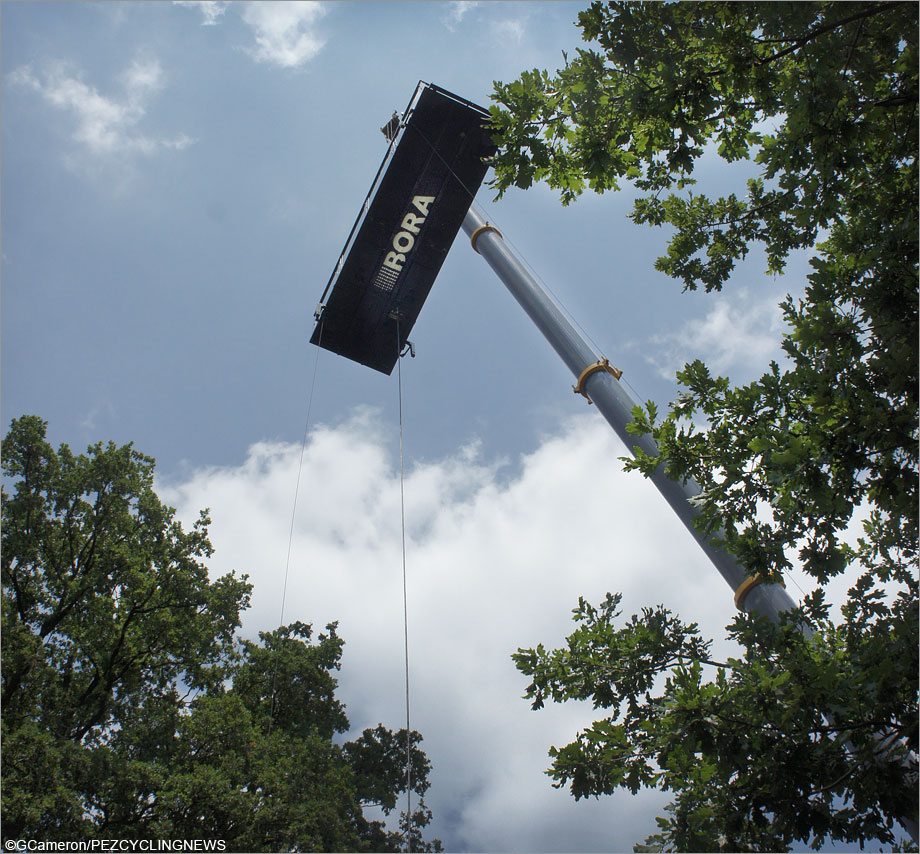 It’s at this point that the Bora kitchen lifts off and, as the first tranche of journalists sail heavenwards, I speak to Pez favorite Zak Dempster (we talked with him at last year’s Tour here), back for another three-week jaunt after last year.

“It feels good, a bit calmer compared to last year I guess, where you hear a lot of hype and buy into it a bit more. In all honesty, I’m just looking forward to getting the race going. That’s my primary focus. It’s a good feeling … the calm before the storm!”

“My aim was to make the team again, and not only that, but to be a significant contributor to the team’s success. If I get a chance to go for a result, they won’t have to ask me twice. It’s a long three weeks, and so much can change, that’s what makes it so dramatic.” 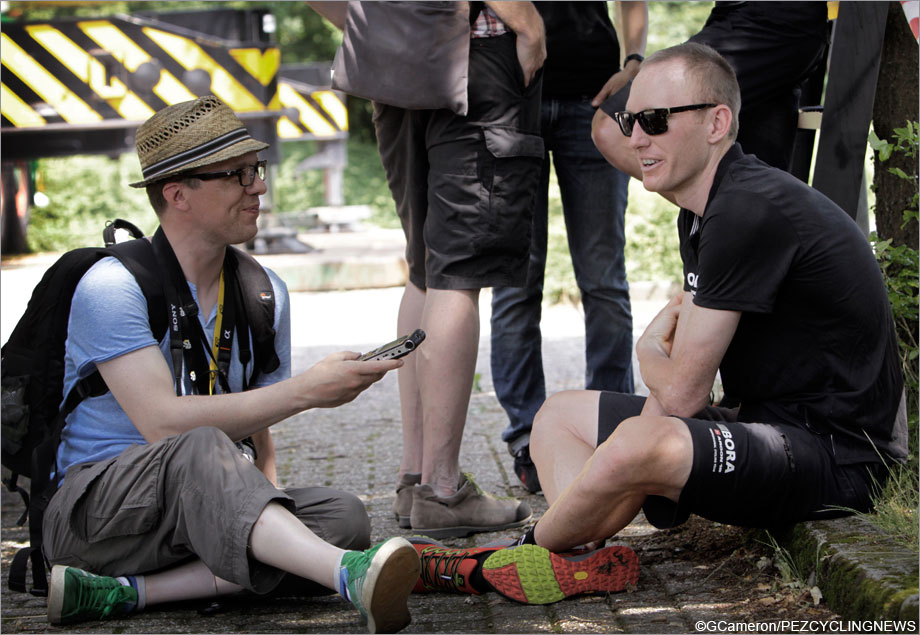 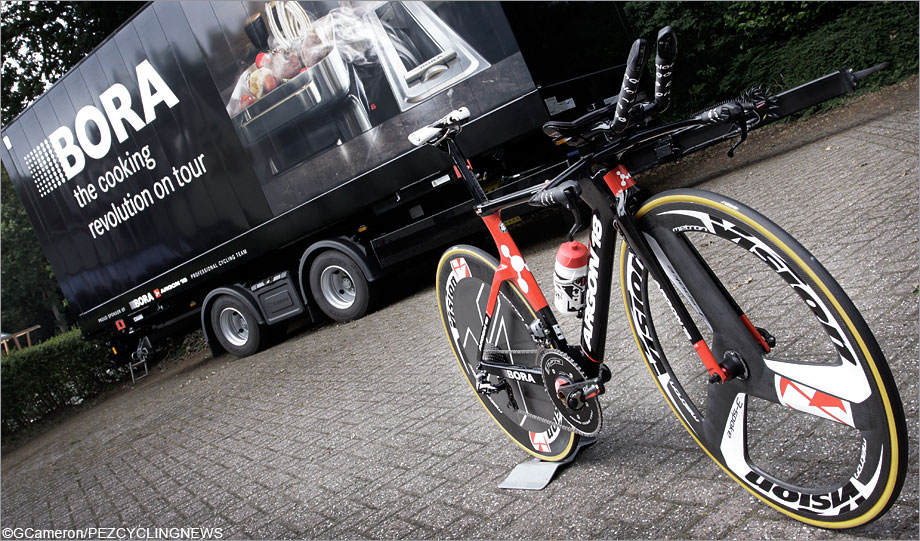 “You look at Bartosz Huzarski … I didn’t really know who he was when I came here to be honest, then you see he’s been second to Rodriguez in a stage of the Giro, top ten in the US Pro Challenge. These are good results … you don’t just tumble into a mountain stage finish!”

The whole point of coming was to see the Bora cooking demonstration; I just didn’t expect it to be in the sky, so I’m wondering what I’m about to experience.

Standing next to me is Willi Bruckbauer, the founder and owner of Bora Cooking Systems. He started the company in 2007, so they’re still relatively young, but anyone who has watched Eurosport will have seen their ads on TV. With a glass cube towed along with the Cooking Truck, everyone on Tour will be able to watch Claudia Eder, chef and nutrionist, prepare the meals for the riders. Pez reviewed the Team Bora Cook book earlier this year, and was duly impressed.

The truck is almost 19 meters long including a glass cube and a trailer, and has a kitchen with an integrated BORA cooktop and dining room for 14 people. Each rider will have an individual nutrition plan for all meals over the course of the Tour with all the best ingredients brought from Bavaria. The Cooking Truck means a consistency of approach regardless of which hotel is used.

Willi told me: “We are a sponsor since January, and we aim to get more brand awareness, especially in the north of Germany and the other European companies. We couldn’t do this with football; if we went to a top team in Germany it would be too expensive.

The perfect sport for us is cycling sport. The connection between nutrition, preparation and cooking, our products and the food needed by the riders is perfect.

The cooking truck is for roadshows, for our cooking academy, for product training and installation training. If we have dealers that are more than 500 kilometers away from us, we take this truck to them, set up in the car park. We have a trainer, and a chef. We explain the product, how it works, why it works, why it is more efficient than classic cooker hoods, and why it’s easier to get smoke downwards.” The idea of Bora’s system is that you don’t get cooking smells hanging around or on your clothes or hair; the lack of cooker hood looks better and saves space. 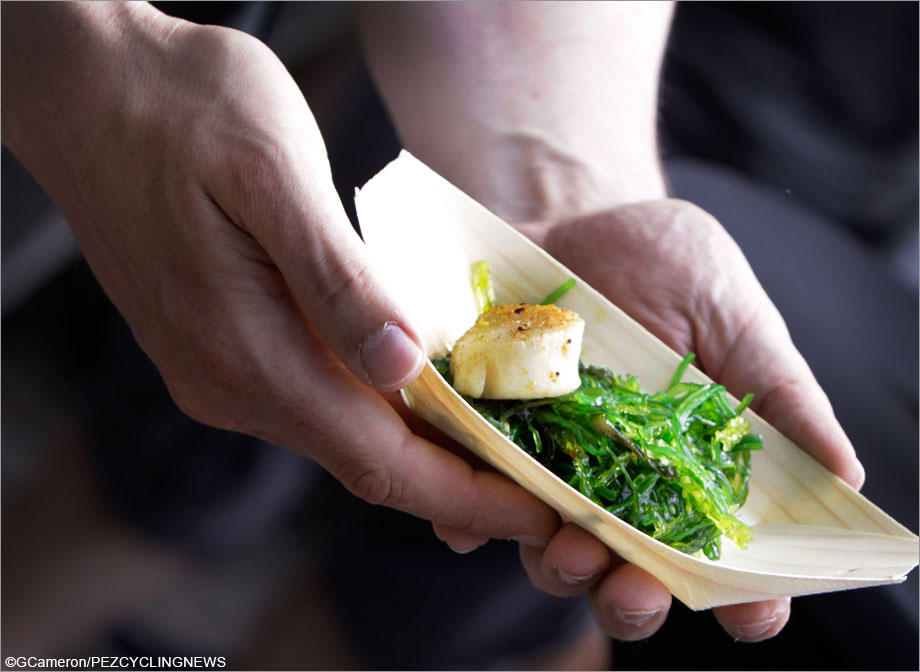 We climb into the training kitchen, a high-tech glass-sided box with recessed fluoro lighting – it’s becoming a trend. Paul Voss and Andreas Schillinger are the riders selected or volunteered or press-ganged into joining us. There is barely a lurch as the crane lifts us off the ground. 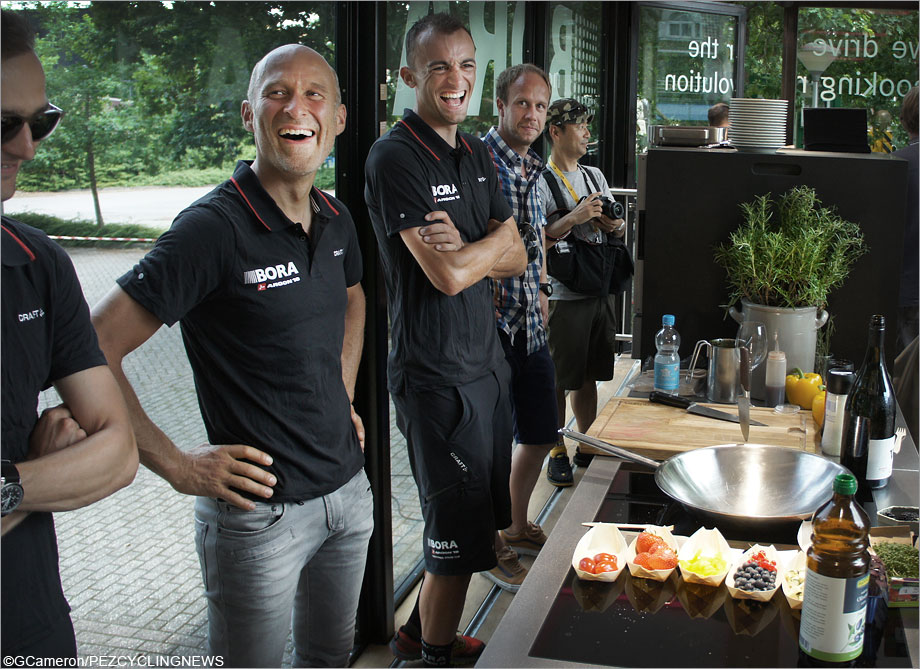 Willi hands out the paring knives, and with the concentration you see in junior school kids carefully cutting out shapes, the riders get to preparing the fruit and vegetables. Willi gets the oil heating and drops a couple of steaks on the grill plate.

And sure enough, the smoke does go down. Voss and Schillinger get their smart phones out when they realise how high up we are; the horizon is just trees as far as you can see. The Team Sky ‘Deathstar’ bus looks like a little toy way below. 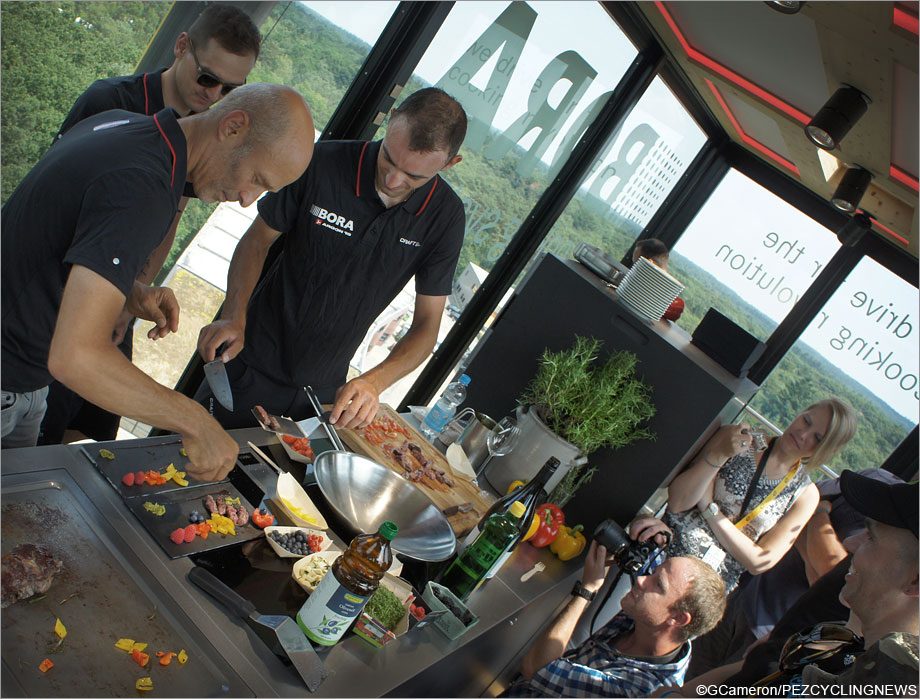 When I’m back on earth and wandering through the hotel, a bit dazed after my ‘flight’, Chris Froome is sitting unmolested by any press officers as he runs an interview with the BBC, looking relaxed and confident. By the time we get back to the press center, Nibali is on his way out looking fed-up. 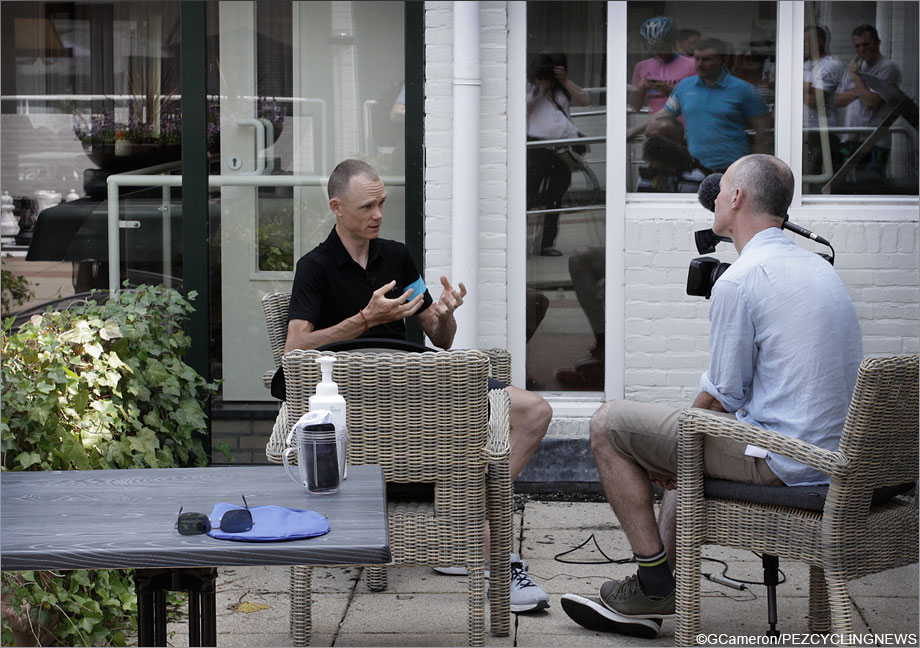