Tour’15 is in its final week and the Alps are on the horizon, all is not over for this French Grand Tour, or is it? Lee Rodgers casts his eye over the other side of the Tour in his usual unique fashion. Sagan the new eternal second, Ex-dopers on TV should be careful what they say and what will happen in the Alps? All in Lee’s Tour Lowdown.

“What do you want to be when you grow up, my child?”

“I’d like to be second on five separate stages at a single Tour de France, Ma!”

So enthralled to the idea of coming second was the little Peter Sagan that he had images of Raymond Poulidor, the Brooklyn Dodgers and Al Gore lovingly plastered all over his bedroom walls. 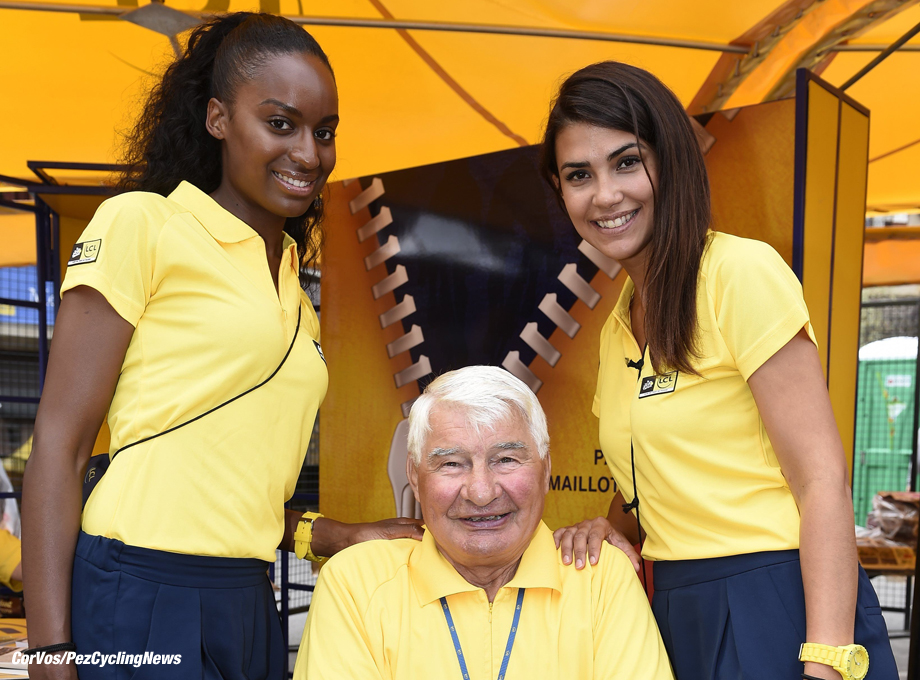 Raymond Poulidor: Not so bad being second

“Yes,” he said to himself as he stood gazing up at his shrine to second, his fist clenched and a single tear running down his cheek, “one day I will frustrate the living heck out of Oleg Tinkov.” 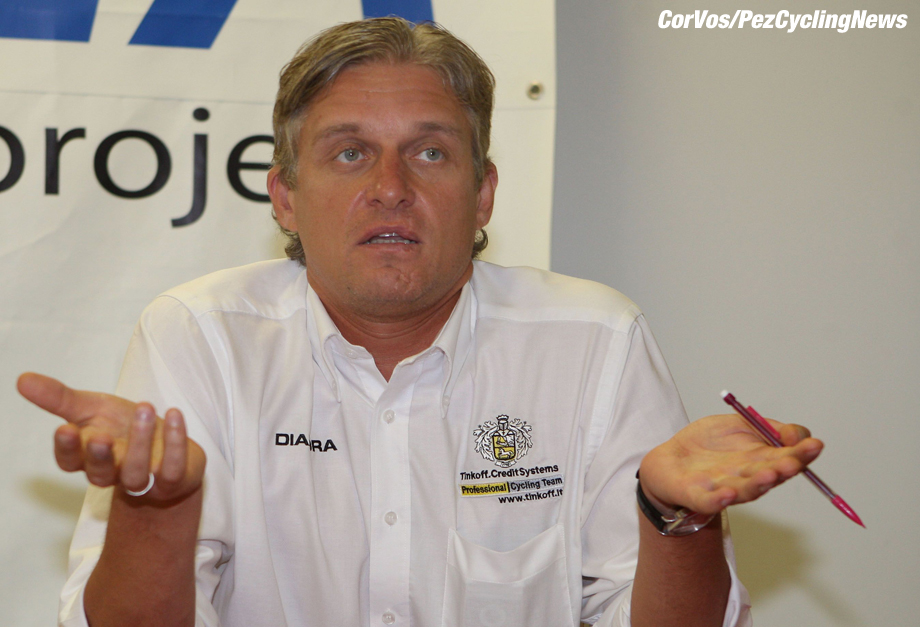 There is also the bonus of annoying Oleg

Forgive me the overuse of artistic license there but Sagan’s fifth second at the 2015 Tour might for some look like he’s actually enjoying all this. Nothing of course could be further from the truth, and the rueful smile each time he has missed out but still received the Green Jersey says it all: here’s a young man that seems like a nice fella who no matter what he does just can’t get the cards to fall for him, and yet he must also hold his hand up and take some of the blame too.

Yesterday’s second to Ruben Plaza of Lampre-Merida was a case in point. Sagan, away in the breakaway again, strung out his fellow escapees on a descent that was still some 45km to the finish and earned himself a gentle rebuke from Lotto’s Adam Hansen. 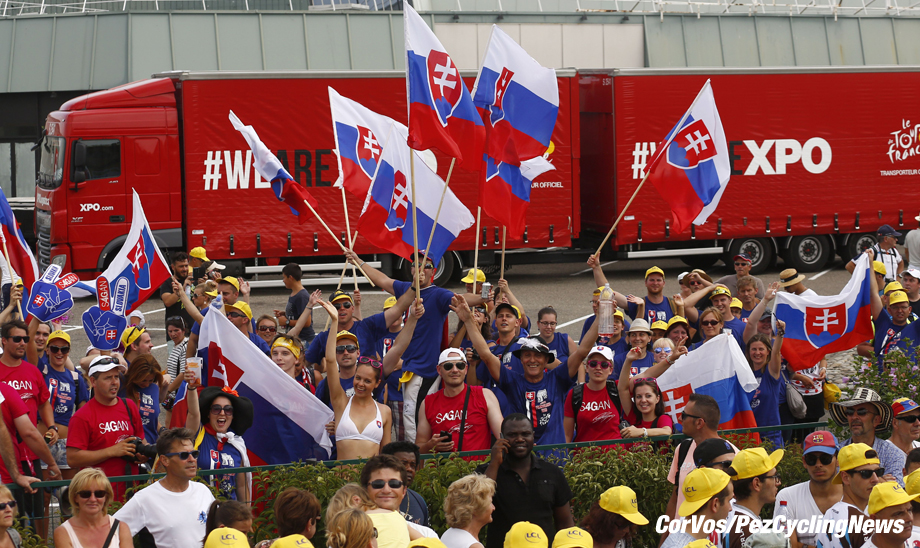 Later in the stage, after Plaza had escaped but was still catchable, everyone sat up waiting for Sagan to start the chase. Of course, Sagan was the most natural finisher in the group and no one would have wanted to drag him to the finish, but how many were also annoyed at having to risk life and limb to stay in contact with him on a hill that he was never going to win from? 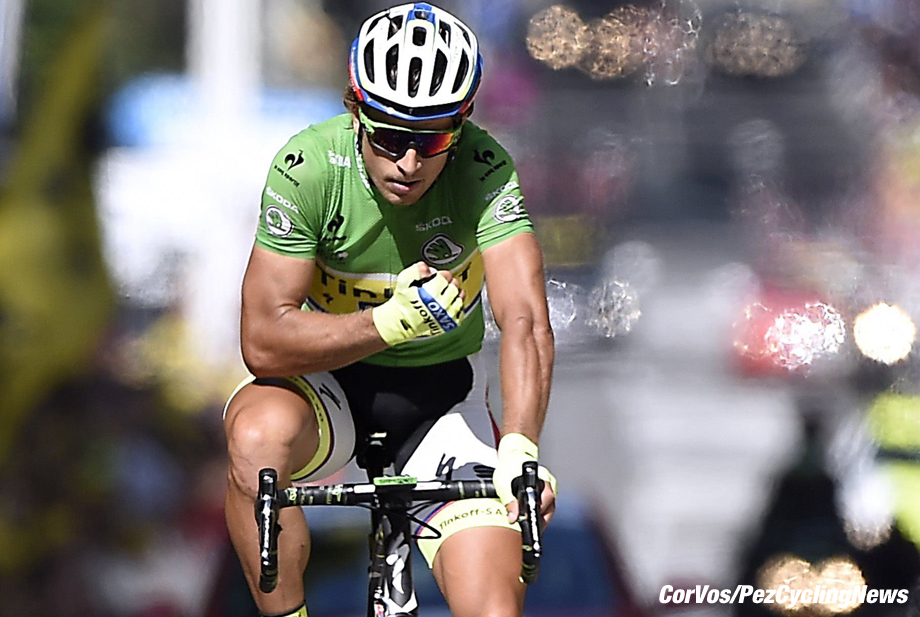 However, there’s no doubt that Sagan is winning many new fans over to his cause, standing out as one of the very few genuine personalities in a sport that is woefully lacking in charismatic personalities.

Speaking of personalities, Greg Lemond is proving to be a rather adroit and informative cycling commentator. If you haven’t seen his Lemond on Tour program that airs before the racing on Eurosport, you’re missing one of the most interesting segments on pro cycling around on the mainstream networks. His live work just before and after the day’s racing is also very good, he talks about the action with passion and excitement and when he does relate it all to his own racing experiences it is never overbearing or too self-absorbed. 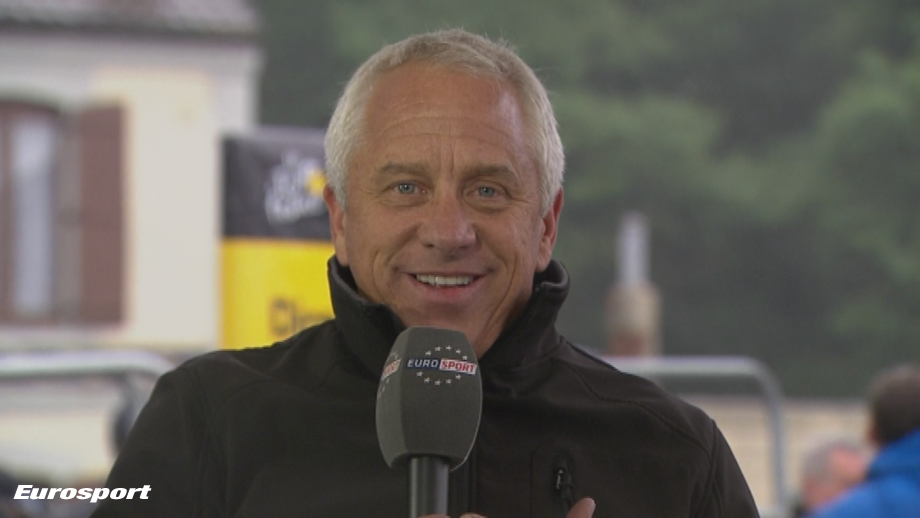 And yet, when you see Lemond standing and chatting away with Alejandro Valverde, it all feels a little disagreeable. This though is the world of cycling, where everything is, let’s face it, at least a little disagreeable. It’s also confusing, so much so that even a guy who was right in there like Lemond doesn’t quite know who to admire and who to not. Armstrong obviously gets short shrift form the only American to ever win the Tour de France, but why does he praise Pantani as a great bike rider? I’m not here to have a go at Lemond really, but to use this as an example to show just how confusing pro cycling truly is. 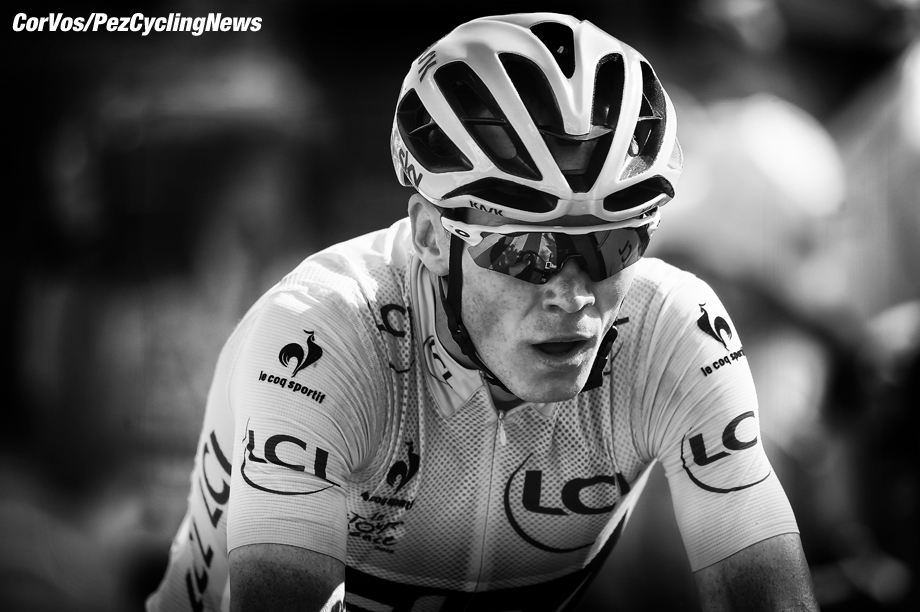 Froome: Getting a hard time off the bike

Look at the case of Chris Froome. The poor guy had a cup of urine thrown at him the other day and is facing daily accusations from all corners. Froome is annoyed and Brailsford is furious with it all, but what they are missing – just as much as are the fans calling for Froome’s head – is that people are fed up with cycling as a whole, having been let down by all involved.

It’s come to this, an absolute mess of a sport where many cannot believe what they see, where former dopers like Richard Virenque and Sean Kelly are welcomed with open arms but others like Armstrong and Rasmussen are treated with hostility. Why so? Did they not all dope? Or is it about how you smile as you cheat? 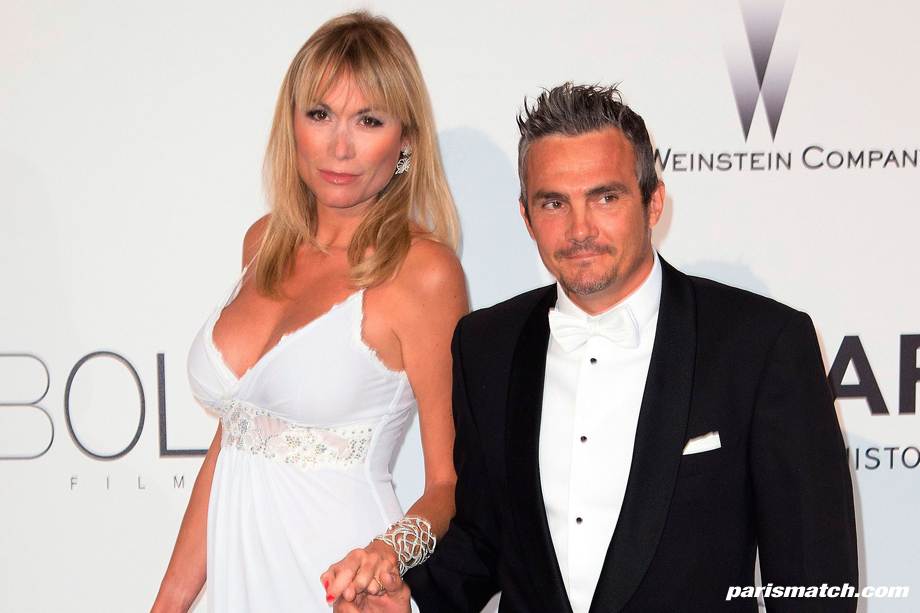 The Laurent Jalabert kerfuffle was a case in point. Jalabert quietly got away with being a former EPO junkie and cheating his way to a career as a pro and another as a commentator, and all was well until he had the temerity to say that he couldn’t believe what he was seeing when he watched Chris Froome climb. People were up in arms. But what is being said here with this reaction is that it is ok to be a former dope cheat and work in professional cycling as long as you never mention doping issues. 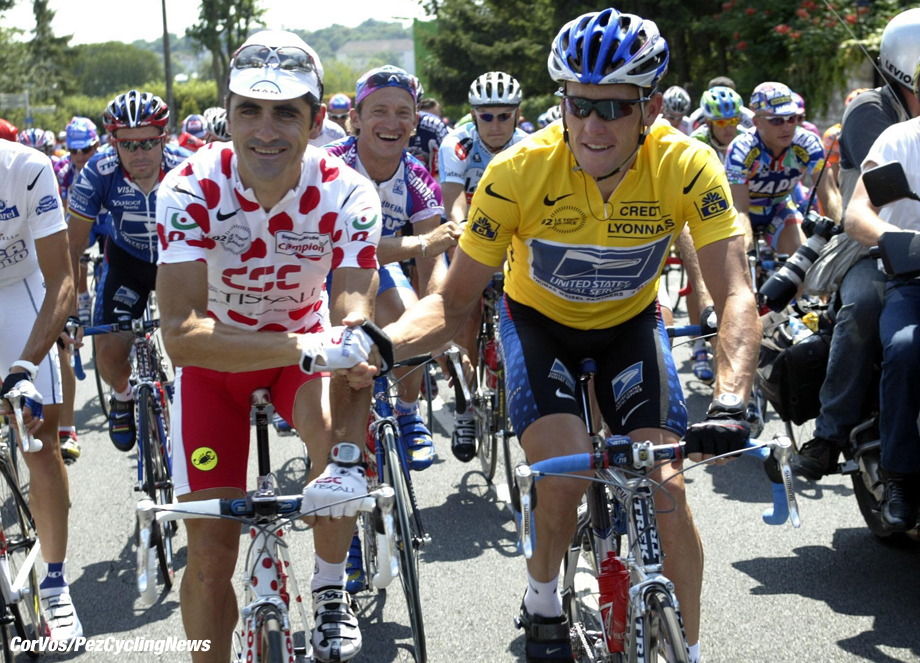 Laurent Jalabert with his mate who never won the Tour

Isn’t the only truly sensible option to simply not employ former dopers as commentators? And, to continue this, to not employ them as team managers, coaches and in other staff positions? As far as I can see, cycling and the Tour itself will never win back any confidence unless this becomes policy.

In other news, the Alps are coming! After yesterday’s stage Contador spoke about how strong Froome was yet insisted that he was still in the hunt for Yellow. The commentator reiterated that he had just said Froome was very strong but Contador explained that several members of the Sky squad were visibly tiring from all the work they’ve been putting in.

Expect attacks aplenty this next week once the road rises. Ok, expect an attack or maybe two. In truth, the race looked done after the Pyrenees but Nairo Quintana looks like he has some powder left yet, and if Froome has a wobble or an untimely mechanical then perhaps we could have a race once again. Well, maybe? 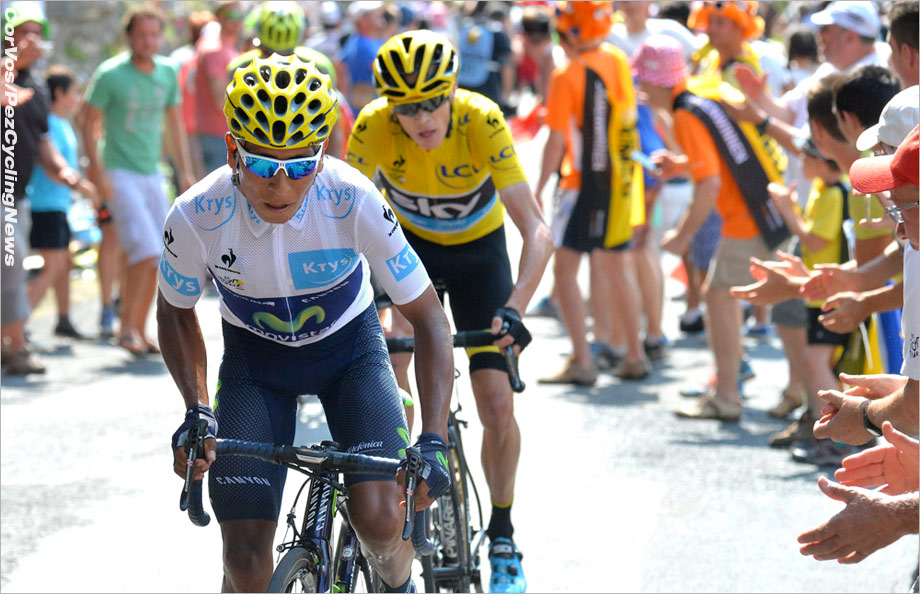 Has Quintana kept his powder dry?

Apparently Alpe d’Huez has been closed to camper vans since yesterday, with police expecting a record number of fans. Let’s hope everyone stays safe up there, particularly Peter Sagan, who has a date in Paris with his beloved second step on the podium…

With only the Champs to come for the sprinters, Peter Sagan will be looking hopefully for another spot on the second step of the podium. 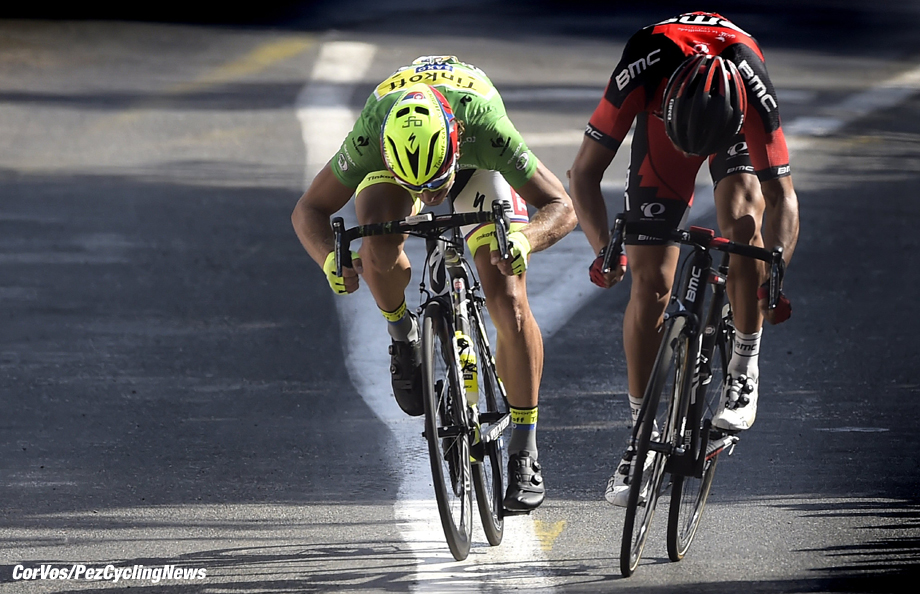 Another 2nd place for Peter

Parrinello 4th at the Trofeo Matteotti