At the end of a strangely subdued Stage One of the 2016 Tour de France it was the man many of us felt had won his last Tour stage, Mark Cavendish (Dimension Data & Isle of Man) who was best of the very best leaving Marcel Kittel, Peter Sagan and Andre Greipel in his jet wash to take the stage and the maillot jaune with a burst of speed harping back to his heyday with HTC.

Just last night I was chatting to some colleagues and we agreed that Cav had won his last Tour stage – we got that one way wrong . . . 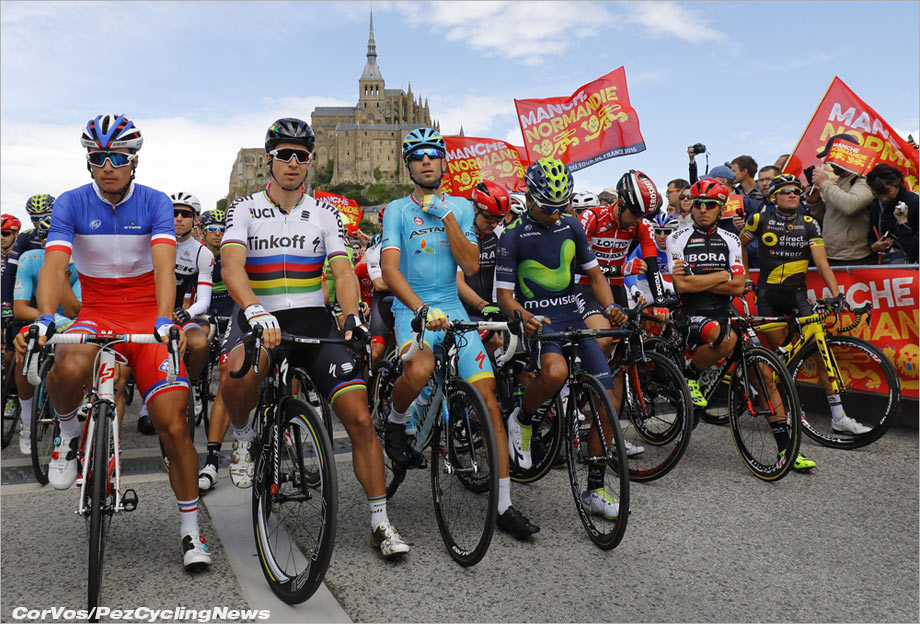 With a strong wind blowing hard beneath an English Channel grey sky heavy with clouds the 2016 Tour de France finally became a reality with Normandie’s stunning Le-Mont-Saint-Michel as backdrop.

A day for the sprinters but with a couple of fourth cat. climbs along the way as early spice to goad the lesser lights into a frenzy at the thought of all that Media attention the polka dot jersey attracts.

But also a day to be on guard for the GC riders; that wind means echelons – Stage One and already the proverbial, ‘day you can’t win le Tour but you sure can lose it.’ 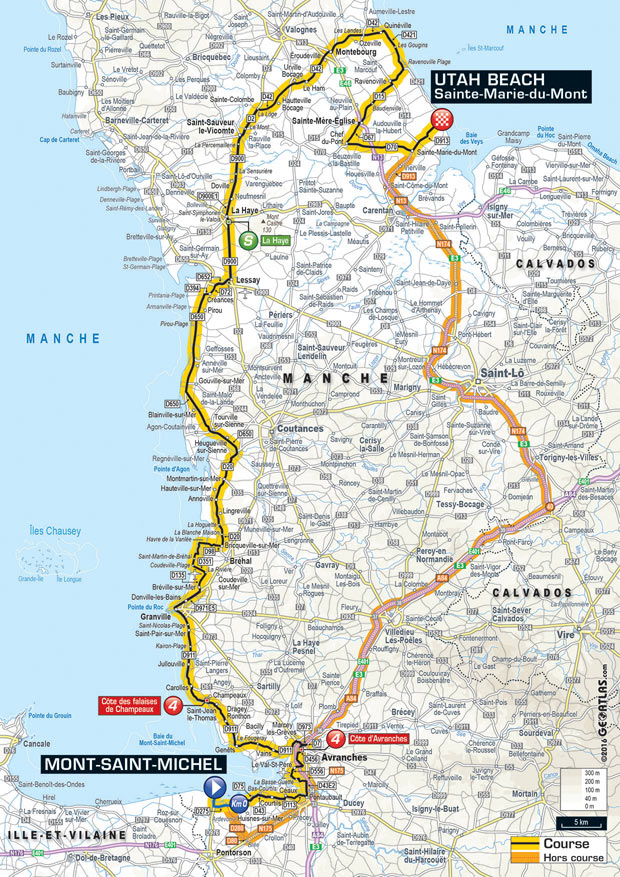 The first attacks came from the instant the flag dropped with Leigh Howard (IAM Cycling), Jan Barta and Paul Voss (Bora Argon 18) carving out a minute very quickly with Alex Howes (Cannondale) and Anthony Delaplace (Fortuneo-Vital Concept) trying to bridge. The three are riding as if they are in the last 10 K with one minute becoming three then four very quickly.

Voss clips off well before the first fourth cat. climb of the day, the Cote d’Avraches to take the points; Bora have obviously planned this one. Howard isn’t chuffed but grabs second spot from Barta.

With Barta taking his foot off the gas, Howes and Delaplace bridge up to make it four chasing Voss who’s 50 seconds up the road; well, three – Barta wouldn’t be contributing.

And Voss has the climbers’ jersey, taking full points on the Cote des Falaises de Champeux – nice job by Bora. Howard takes second place with an eye to tomorrow. Lotto and Etixx tap it out at the front of the peloton oblivious to KoM points with the gap on the prime line at four minutes – they’ll be happy to leave it at that for the moment.

Yes, off the hill, it’s all calmed down now; 125 K to go, five up front, Lotto and Etixx on the front of the peloton and the gap on three minutes.

Movistar are keeping Quintana well up front – an ambush from those Belgies and Dutch could come at any time when they hit those exposed coast roads, with this wind. The five are spelling nicely, the fans are out in force; the peloton is tranquilo – but depending on that wind it could all change in a heartbeat.

We’re at 100 K to go and the gap is 2:30, the finish is flat and fast so it should be a real sprint train shoot out; Etixx, Lotto, Katusha – they’ll all be out for yellow today.

And out of the feed zone it splits in the cross wind as the previously tranquilo peloton ‘radges oot’ – as they say in Newcastle. Eisel, Impey, Cummings, Voeckler are all popped as Etixx use their largest shovels to stoke the boilers – the gap to the break is now under a minute. 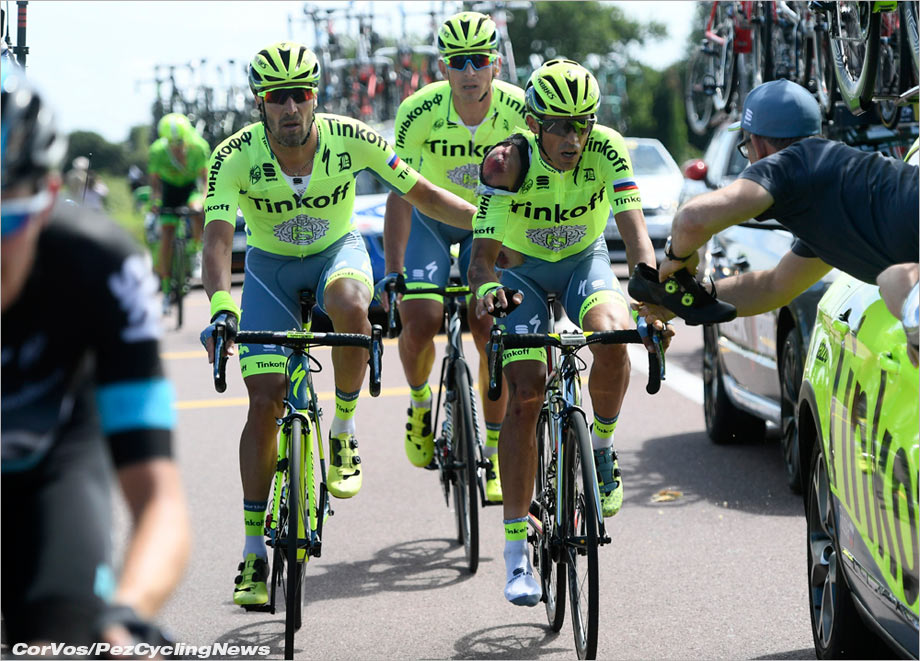 And the first drama of the race; Contador goes down – hard. He’s badly torn up on his shoulder – he has five team mates back for him; Tommy Voeckler has latched on to the Tinkov train as has Geraint Thomas.

Brent Bookwalter (BMC) and Luke Rowe (Sky) were down too, no sign of them as the peloton comes off the gas a little with the drama behind and the Tinkoff boys get their Boss back. Contador changes a shoe now, the ratchet having broken on his right foot Sidi – and there’s Rowe, he’s safe. 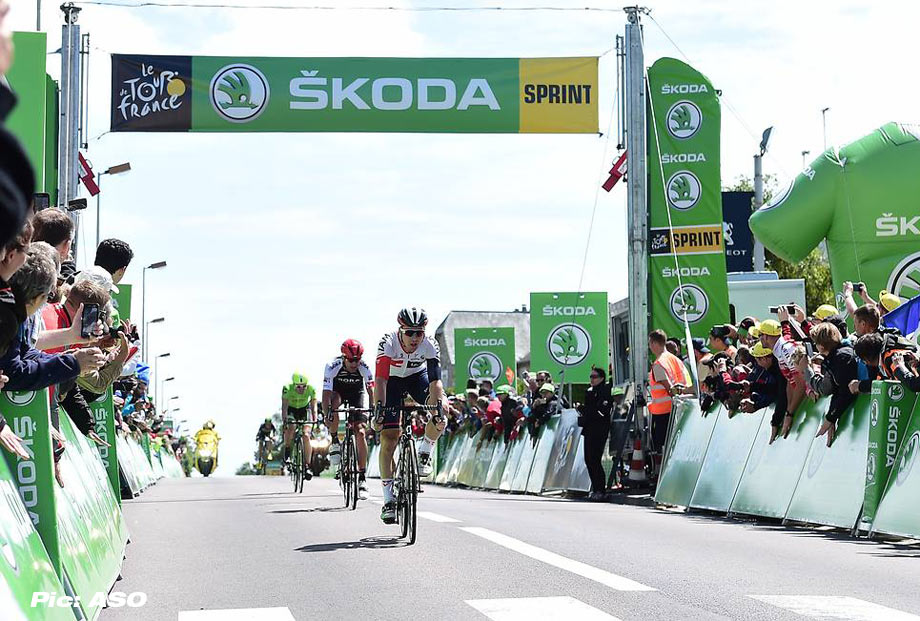 The only points sprint of the day – the break of five is now four, Voss has slid back and it’s Howard who takes the points.

Contador is back at the doctor’s cabriolet getting his wound dressed – nothing broken then, just abrasions; as Bookwalter battles his way back. And Cummings is back, too.

The break is still clear but the peloton eases and the gap stretches a little as Tosatto brings his Capo back up.

Local boy Delaplace drags Howes clear with 55 K to go, the Frenchman wants to show himself as long as possible – as a Pro Conti rider his sponsor will be loving this. Just the two clear now as Etixx and Lotto give us déjà vu inside 50 K to go.

The K’s click down and still they battle on, 37km to go now with 30 seconds in hand – good TV time for our desperados and the peloton is happy with the status quo.

They’re on the other side of the Cherbourg Peninsula now; it’s cross wind but it’ll soon be turning into a head wind so there probably won’t be an echelon-fest.

It’s a headwind now, 25 K to go and the break’s advantage has gone back out to 25 seconds with the peloton gutter to gutter. It’s 20 K and the gap is still 30 seconds; calm before the storm, for sure.

The two up front are attacking each other – it must be for that combativity price – and with 15 K to go the fact that Delaplace and Howes are still clear says it all about the pace in the peloton. 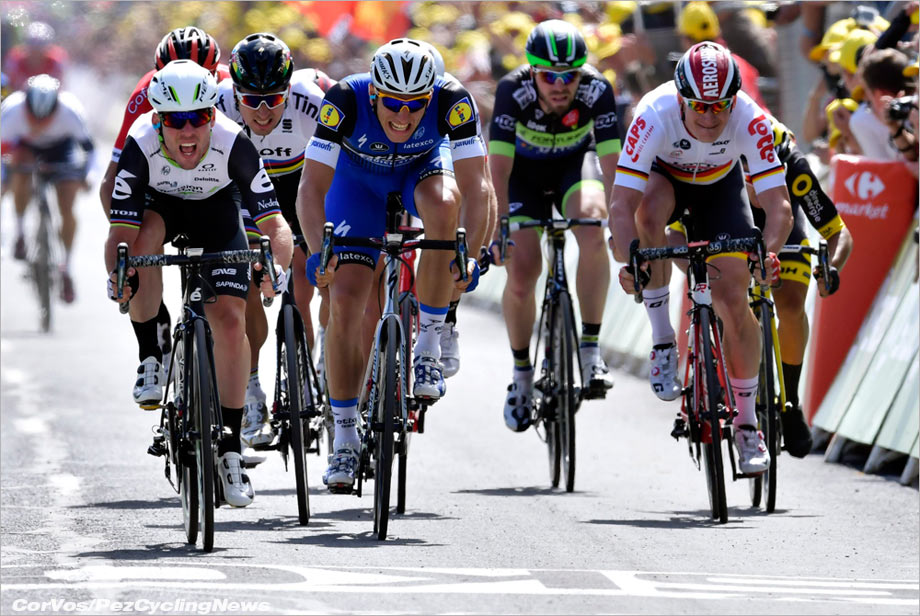 There are 13.4 K to go now as they turn with the tail wind; Etixx on the left, Lotto on the right, Sky and Movistar in the middle but it’s far from frantic.

At 10km to go and the dead men continue to walk, Howes and Delaplace are still clear; it’s a surreal finale with a becalmed bunch. Maybe it’s the sea air?

The five K banner and finally it’s over for the break as Lotto and Etixx turn on the super chargers with five/six riders each up front; four K out, status quo; inside three, slightly downhill; Lotto Jumbo now for Groenewegen; Katusha now with two to go; Boason Hagen looks back for Cav, where is he? 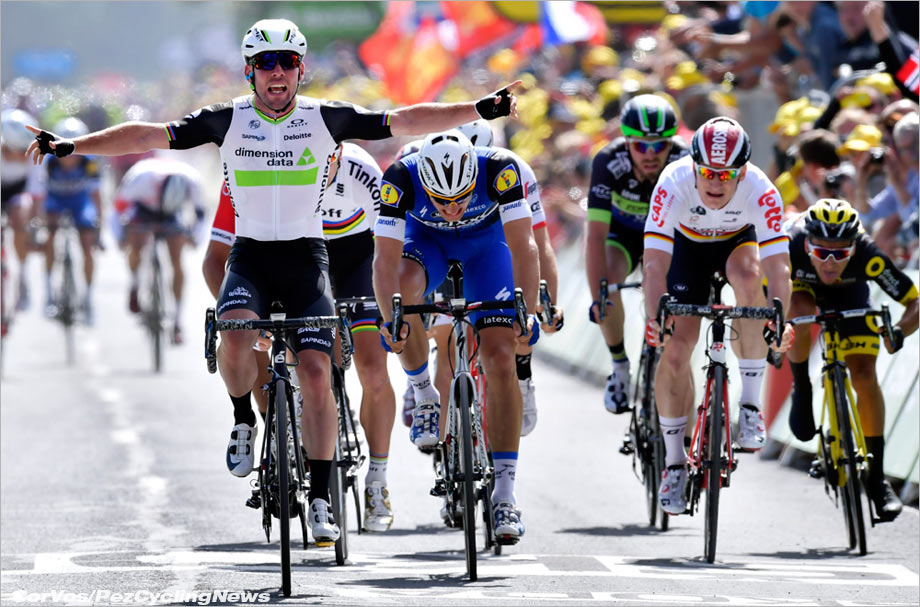 The maillot jaune for the Manxman – a full house of Grand Tours leader’s jerseys for him.

And there we were saying he’d lost his hunger . . .