Race report: Chris Froome took over the race lead with a sneak attack at the summit of the Col de Peyresourde, stunning his rivals as he road away on the descent to Luchon, for a most unexpected solo win, and gaining some valuable seconds ahead of Sunday’s huge stage.

As we watched and waited for either Team Sky or Movistar to make an uphill attack, the British squad played a masterstroke and Chris Froome flew, not up but down, hill to victory. He left the others teams with some serious questions to answer as they failed to respond and chase until it was too late. Chris Froome takes Yellow and with Adam Yates in White and Mark Cavendish in Green, and with 5 stage wins out of 7, it couldn’t be better for British cycling (we won’t mention that he’s actually Kenyan). 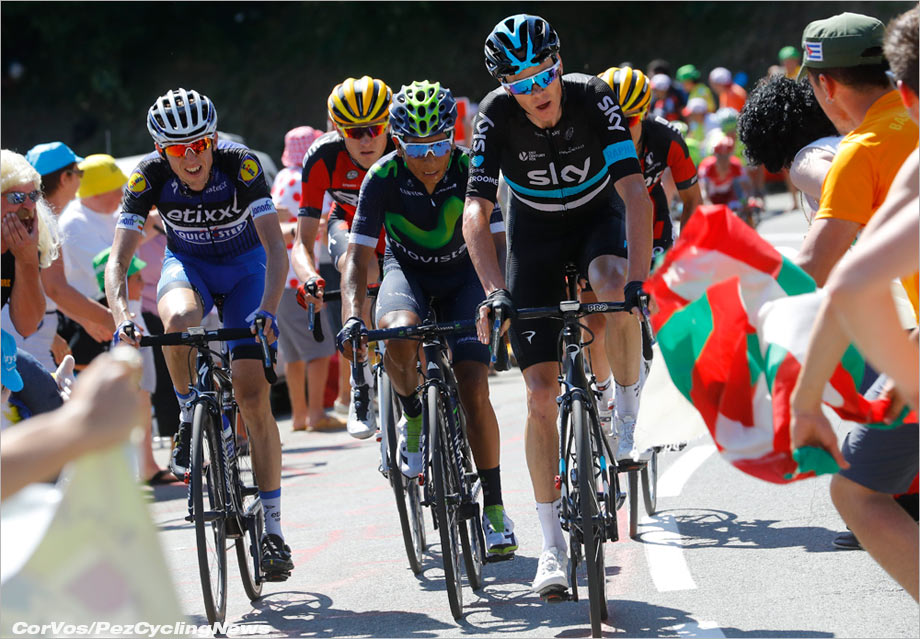 Furious Start
Quick, slow, quick, quick, slow…this race has been dancing to a changing beat ever since it left Mont St Michel but we’re into the mountains now and the riders were lining up to do the Pyrenean Two-Step.

Right from the moment the flag was pulled in we had riders firing up the road attempting to get clear. In fact, the action was on even before the race had left the neutralized zone as Geraint Thomas (Team Sky) and Jan Bakelants (AG2R-La Mondiale) were both on the ground at one point. 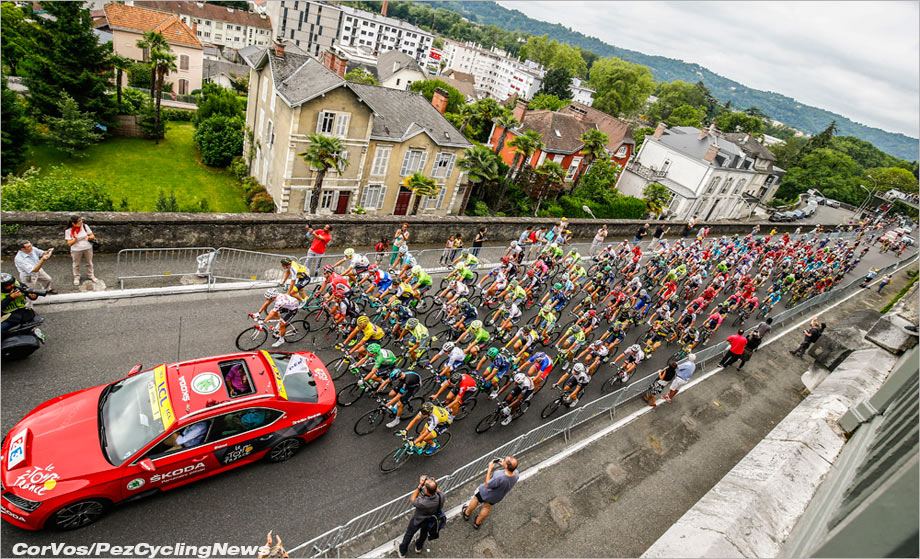 Fast and crazy, attack after attack, the first hour of racing saw 51km covered and the riders hoping for a quiet day with such big climbs ahead were not getting the easy introduction they’d hoped for. At 184km and with no less than 4 categorized climbs, and the first Hors Categorie monster in the shape of the Tourmalet, it was always going to be a hard, tiring day.

Hors Categorie
Coming into the Tourmalet a group of 13 riders held a slim lead but as they hit the slopes it began to break up… and then all hell let loose as first Julian Alaphilippe (Etixx-Quickstep) attacked only to be out-attacked by Thibaut Pinot (FDJ). Rafal Majka (Tinkoff) joined Pinot at the head of affairs as Greg Van Avermaet began to lose contact with the main bunch. Another to struggle to hold the GC group, being led by Team Sky, was Vincenzo Nibali (Astana) and he soon had Alaphilippe along for company as the young rider seemed now to be struggling.

The big surprise was that the lead duo had now been joined by another Etixx rider in the shape of Tony Martin who showed once again that he’s more than a time-trial one-trick wonder.

Crossing the high summit and it was Pinot who easily took the KOM points ahead of Majka with Martin just a little way back and ready for the descent. With the bunch coming along behind, the lead trio now had an established gap of 2:20. With Pinot still highly placed in the overall, Movistar and Sky were keeping the advantage to a manageable level.

Yellow Jersey Van Avermaet was now over 2:30 behind the main group and he would struggle to hold the jersey with more climbing to come. 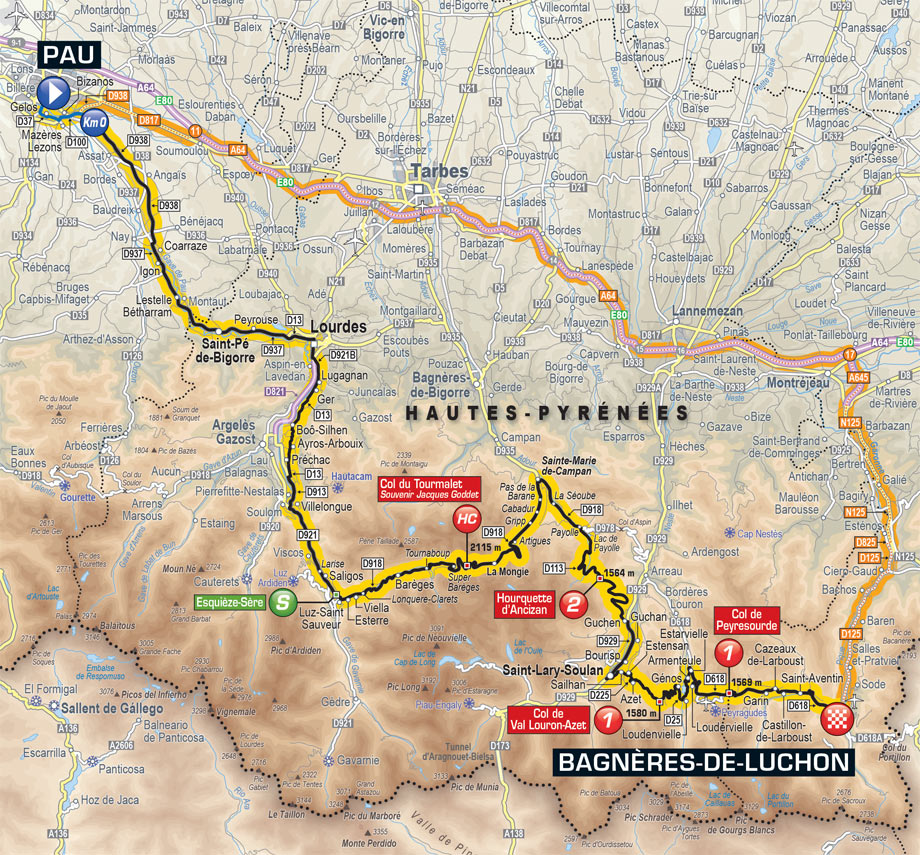 Hourquette d’Ancizan
The leaders were now on the second climb which at only 8.2km and an average gradient of 4.9% didn’t sound too bad. With a short downhill section playing with that average there were some seriously steep ramps.

Sky and Movistar had been alert to the danger and the gap was dropping as Pinot once again led over the top to take maximum climber points hoping to be in the spotty jumper tomorrow. 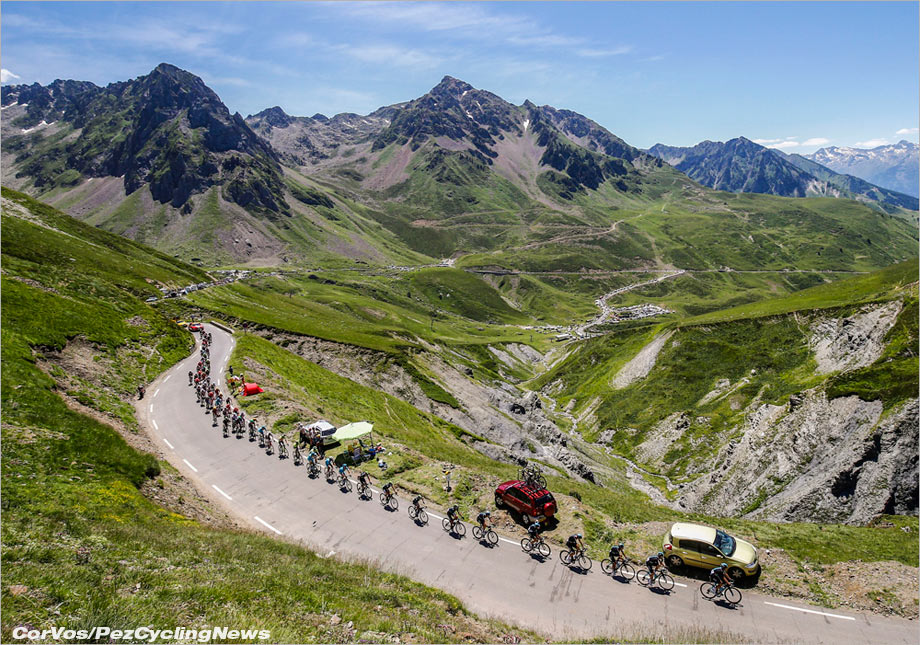 Val Louron
And that’s the way it stayed as the lead three hit the lower slopes of the Val Louron with a diminishing gap of 50-seconds. Movistar had noticed that Team Sky worker Mikel Landa was slowing and they took over the work at the front of the vastly reduced main bunch. Wout Poels (Team Sky) dropped his chain but Landa used the last of his energy to pace his teammate back to the group.

There was a feeling that the lead breakaway was simply a forerunner to the main action of the day and this proved correct as Pinot was cooked and left Majka to push on with Tony Martin struggling to stay with the Tinkoff man.

At the back of the race, triple-stage winner Mark Cavendish was now some 23 minutes behind the lead, and dropped from the gruppeto, and was set to have a struggle to finish inside the time limit, especially as he still had his least favorite mountain, the Peyresourde, to get over.

Six kilometers from the top and Majka and Martin were back in the fold…and then Pinot and Martin were promptly dropped from this group as Movistar pushed harder and harder.

And then the sad news that Michael Mørkøv (Katusha) had finally succumbed to the injuries he’d been fighting against since Stage 1 and had abandoned, the first rider to do so this year. While we’re on news, word had come through that Alberto Contador (Tinkoff) would announce on the rest day that he’s signed with Trek Segafredo for next year, a brave move for the Spaniard to rejoin the team that had cast him adrift in favor of Messrs Armstrong and Bruyneel.

Over the top of the mountain and Majka tried to move up to take the KOM points but Froome and his Sky teammate Poels blocked him out, leaving the Polish rider none too happy, although he’d done enough to ensure he would be ahead of Pinot in the Mountains Classification. Adam Yates (Orica BikeExchange) was still hanging in there in this group which was now down to about 30 riders but was both the White Jersey wearer and the virtual holder of the Yellow at that point.

Rolling a Tub
On the descent Wilco Kelderman (LottoNL-Jumbo) went down heavily on a slow right hand curve and it was apparent that his front tub had rolled off the rim. He was quickly on his way as a teammate stopped and gave him his wheel to keep him in the hunt. 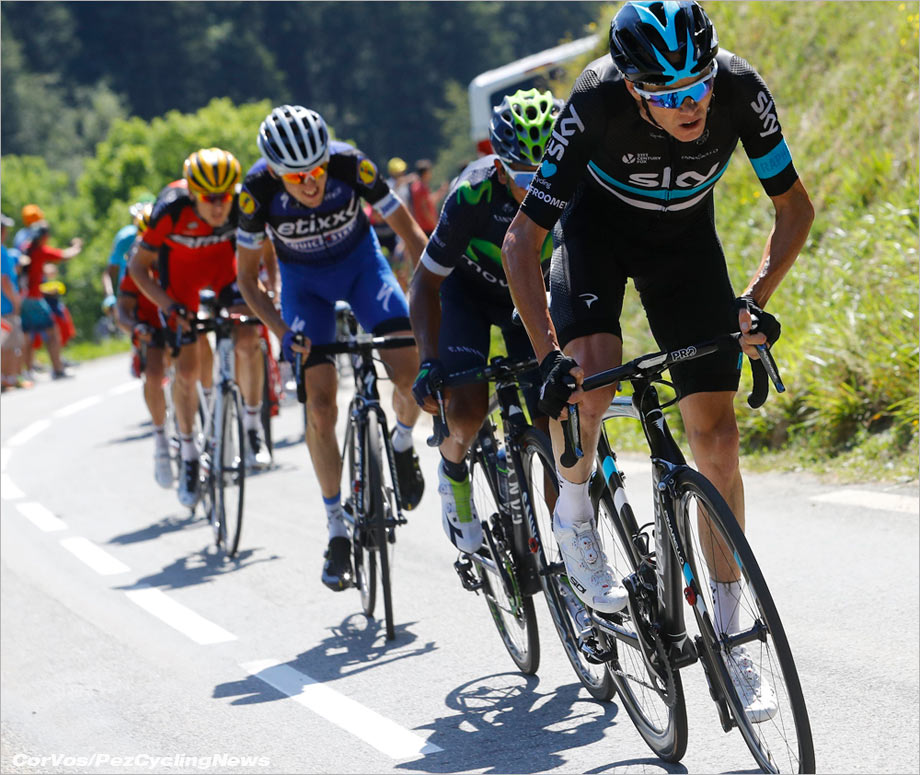 Col de Peyresourde
The main group was now on the lower slopes of the final climb and if the sparks were going to ignite this stage it would have to be here. With a 15km downhill to the finish it was looking like all of the work done by Sky and Movistar would be put to the test before the riders crossed over the summit.

Sky had five men at the front and they were pushing on, whittling the group down rider by rider. The jersey now sewn up Majka dropped off the back but his team leader Contador was looking stronger than he’s been in days.

One by one the GC men were losing domestiques and Sky was now the strongest with Froome having three riders along for support. Nairo Quintana now just had his Movistar teammate Alejandro Valverde for help and BMC had been reduced to just Richie Porte and TJ Van Garderen.

And the attack finally came with Sky’s Sergio Henao riding off the front and Valverde being forced to bring the group back to his wheel. Decent tactics from Sky and it shed some riders such as Aru (Astana) and Frank Schleck (Trek Segafredo) but Yates was still there and the longer this went on, the better it was for his chances to wear yellow.

And now a proper attack from Froome and the group was down to seven with both BMC riders and Dan Martin (Etixx) making the cut. Pressure off for a minute and the group came back to the leaders but Contador was slipping backwards. 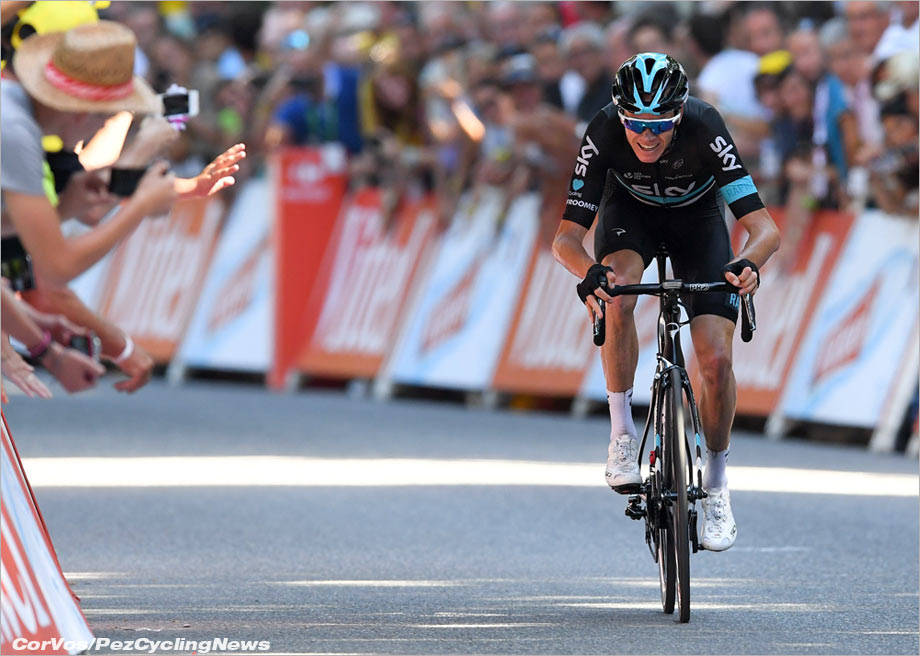 Master Stroke
Was it a push for points or had Froome pulled a surprise attack as he sprinted away from the top? Suddenly he had a gap over Quintana who had sat up preparing for the descent and the Colombian was now desperately looking around for help.

Froome was giving it everything on the descent, adopting a position we’ve rarely seen him in. Valverde was pulling the group in pursuit while the two BMC riders sat and watched the Spanish veteran attempt to pull the Sky rider back.

Like a man possessed Froome was attacking every curve and with 9km to go he had a lead of 12 seconds. Nobody was helping Valverde and Froome was playing out a plan that Team Sky had been keeping under their caps.

Just 2km of flat now and Froome is one of the best time triallists in the world…and he was showing us just why as Sky had played a trump card that nobody even knew existed. Sore one for Pierre Rolland (Cannondale-Drapac) as he crashed on the descent and had injured his left hand side.

BMC Finally Ride
With under 3km to run Porte and Van Garderen finally lent some help to Valverde but it was too late and with Froome flying to the win the others began to look at each other.

Froome had pulled a master coup from the team known for its tactical planning and he took a superb win with Dan Martin leading out the sprint for second and finishing just ahead of Joaquim Rodríguez (Katusha), the group just 13 seconds back from the Kenyan…or the Brit if you like as that means that out of eight stages British riders had now taken five and, assuming Cavendish finished inside the cut-off, would also wear three of the four main jerseys.

Now the others will be forced to attack. Bring on the rest of the race!