Race Report: With a last-second bike throw, Mark Cavendish drew level with the legendary Bernard Hinault on 28 stage wins in the Tour de France after a chaotic sprint in Angers. Side-by-side with Andre Greipel, both men punched the air on crossing the line, but it was the Manx Missile who was heading for the podium.

A frustrated Marcel Kittel got boxed out of it, in a hectic finish to a lethargic day in north-west France. We had the obligatory break, although this was solo and painful for the most part, a counter-attack, and a long, steady chase. None of the major overall favorites had any problems, so it was left to the fast men to sort themselves out for a sprint. 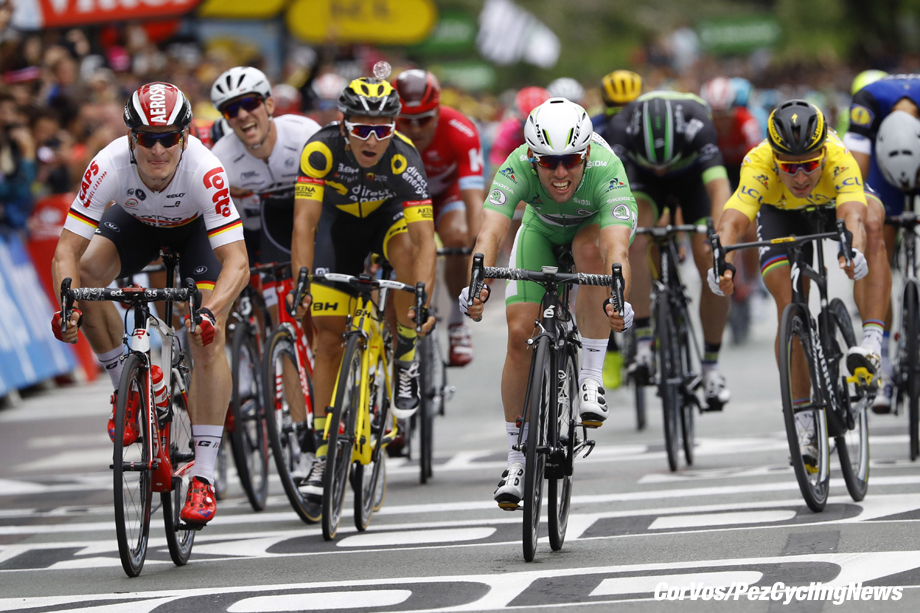 It took the camera to split Cavendish and Greipel

How it went down: Today’s start town is Granville, a town that’s been kicking for around 1000 years. Some people suggest it’s the ‘Monaco of the North’, apparently. Less glamorously, in the UK, Granville is a name associated with a hapless sit-com character of the 1970s.

From the off, today was a little like a scene from a teen movie involving cruel bullies who convince some gormless sap that all the hot girls at the house party really, REALLY want to see him naked. When the sap strips off and turns round the bullies are laughing and his clothes are in the swimming pool. When the flag dropped today, we got the cycling version of that “Guys? Guys? Err … GUYS?!” moment.

Out of the traps like an over-excited greyhound spying a rabbit at 50 paces was Armindo Fonseca from Fortuneo-Vital Concept. Following him… no-one. The peloton just let him get on with the self-punishment. The gap ached like the track lengths on an album of ghastly, overblown ’80s power ballads: five minutes, then six-and-a-half minutes after just ten miles, up to eleven minutes after 16 miles.

Such a long, lonely furrow to plough. Fonseca is actually from Rennes, not too far off today’s route. His team is HQed in Rennes, too, so it was valuable but hard earned publicity.

Behind him, the peloton rolled along, anticipating a sprint Royale in Angers. Tom Boonen won a bunch gallop the last time the Tour visited in 2004. Peter Sagan was in yellow. Mark Cavendish was keeping green warm for him. Jasper Stuyven wore the polka dots, while Julian Alaphilippe sported the white jersey. 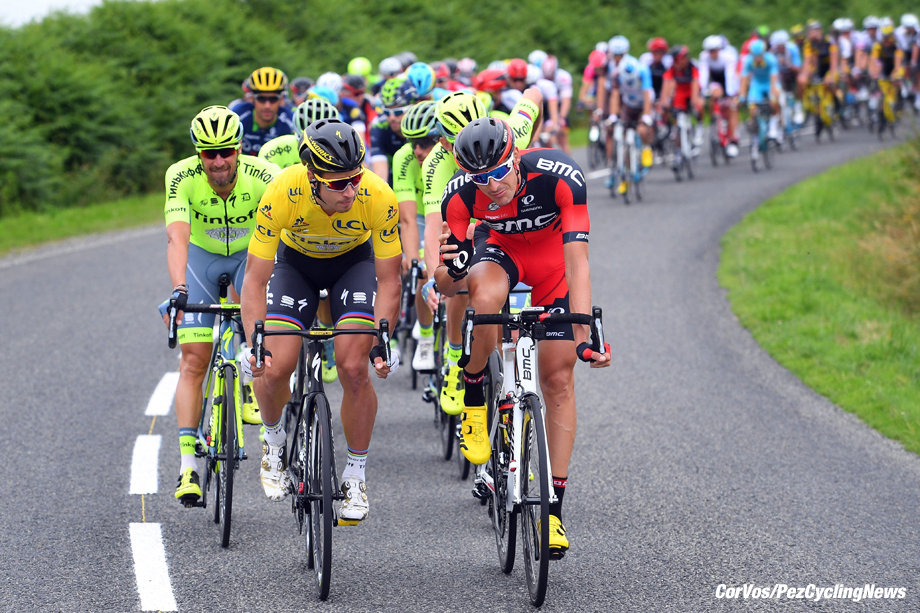 No rush lads as Sagan and Burghardt have a chat

Today was not an all-out fireworks display of a stage, but still a critical part of the big picture. As Alberto Contador and Richie Porte have found out so far at this Tour, little errors or bad luck start to accumulate – before you know it, you’re tumbling down the classification before the race has really begun. This third stage was simple on paper, but needed complete concentration, start to finish.

By half-distance, Fonseca was grinding along, still with three minutes and change in hand, the main field showing little inclination to up the pace. Each Tour stage has a fast, medium and slow schedule… and today was waaay slow.

It was too much for Thomas Voeckler (Direct Energie) who took off in pursuit of Fonseca with 87 kilometers to race. The gap he had to close then had stretched out to over five minutes, and the peloton just watched him go. All of this lethargy must have been particularly appreciated by the likes of the bashed and bruised Alberto Contador and Sam Bennett, nursing wounds from the crashes of the last couple of days.

Fonseca had been out front alone for about 85 miles when Voeckler caught up with him, less than ten clicks after jumping from the peloton. This was the fire under the peloton’s collective ass… Lotto Soudal were having none of Voeckler’s shenanigans and the gap withered on the vine. 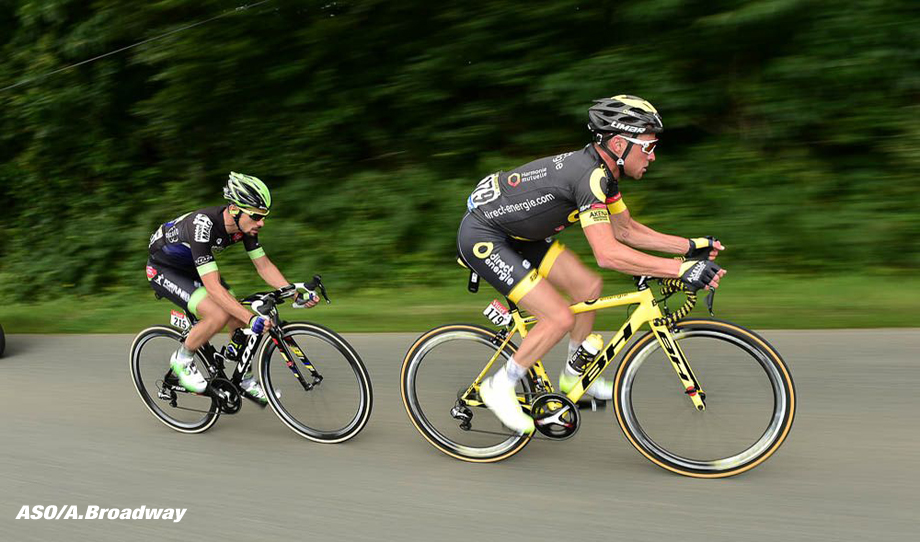 Voeckler and Fonseca – The break of the day

60 kilometers to go, and Voeckler/Fonseca had 2:15. At the intermediate sprint with 53 clicks to go, it was around a minute as Voeckler allowed the hardworking Fonseca to take the points. Kittel took third ahead of his sprint rivals.

Voeckler carried on rocking-and-rolling his way through the countryside, and the lead held at 44 seconds as he and Fonseca went through 20 kilometers to go. Tongue lolling, it was down to 11 seconds with ten kilometers to go as the sprint trains sort of organized themselves.

Eight kilometers to go, and the break was caught. The main field, especially riders from Sky on the right of the road, frantically gestured to the fans who’d encroached onto the road to get the hell out of the way as the speed ramped up.

There was a lot of road furniture on the run-in to Angers, roundabouts and traffic islands, as the peloton split and regrouped with Etixx – Quick-Step seeming to lose track of where Marcel Kittel was inside five kilometers to ride.

Etixx regrouped and drilled it under the red kite, and all the top favorites were there. The last 1000 meters saw riders switching and diving around and out of the mayhem emerged Cavendish to edge Greipel by centimeters. 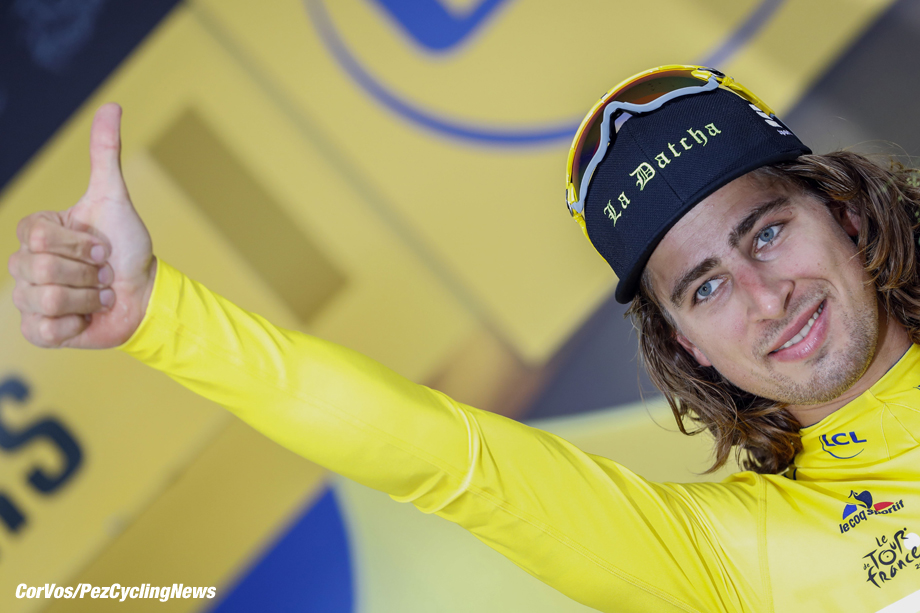 Another day in yellow for Peter Sagan

Keep it PEZ for everything Tour!

Trentino Travelled the World with the 40th #GdTM