Race Report: Giant-Alpecin’s Tom Dumoulin put his time trial expertise to great use to solo his way up the final climb of Arcalis in Andorra. The break of the day managed to hold off the GC men to the line, but there was attacks aplenty from all sections of the Tour peloton. Alberto Contador had to abandon due to illness brought on by his two crashes in the first stages.

The Andorran stage was always thought to be a pointer to who will be the final winner in Paris and it lived up to expectations. The break was strong and big enough to build up a good enough lead for the stage win and Sky were quite happy to let them go. At the end of the stage there were two battles, one at the front for the stage, the other for Froome to contain the attacks from Yates, Martin and Porte. The stage win came down to a ‘Do Or Die’ effort from Dumoulin to pull of his first Tour de France stage win.

Stage 9 to Andorra has five climbs; from the gun the Cat. 1 Bonaigua, then the Port del Cantó (Cat. 1) after 87 kilometers, Côte de la Comella (Cat. 2) at 143 kilometers, Col de Beixalis (Cat. 1) and then the summit finish on the HC Cat Andorre Arcalis after 184,5 kilometers. The stage starts in Vielha Val d’Aran and races in Spain for 130 kilometers before it enters the Principality of Andorra for the last three climbs. 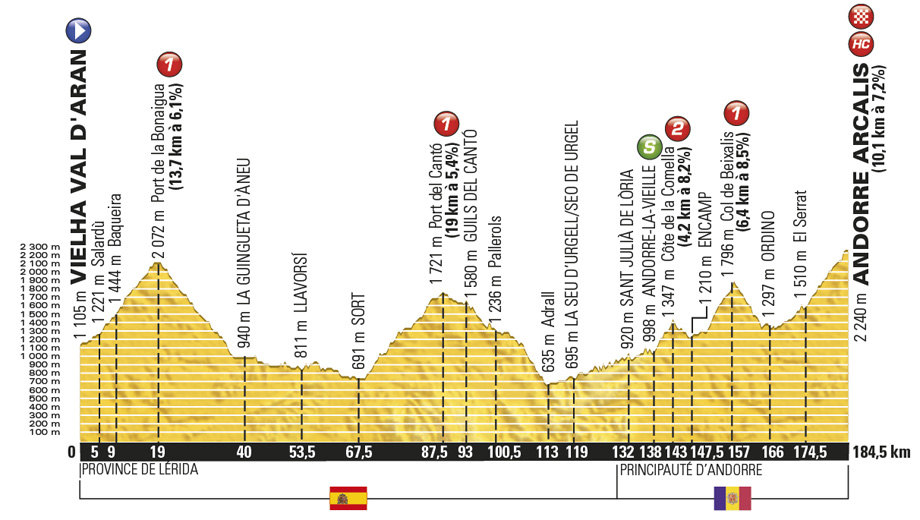 The first climb of the day, the Port de la Bonaigua, started immediately and so riders were warming up on the home trainers before the off and it was Dimension Data’s Teklehaimanot who was first to show interest, but he was soon pulled back to be replaced by another big group including Peter Sagan (Tinkoff). Alberto Contador (Tinkoff) crossed to the front group with Robert Kiserlovski, Alejandro Valverde (Movistar) and Sergio Henao (Sky) join them.

Kiserlovski and Henao sat up, as Contador and Valverde caught the escape which was in the process of splitting, giving a group of around 25 up front with a lead on the peloton with Chris Froome at 1:25. Contador was not looking good and sat up to return to the peloton, Valverde stayed with the front group.

Valverde’s presence in the escape was not welcome by anyone up front as Sky would have to chase them down, so after a few words, the Spaniard sat up and waited for the peloton to catch him and the lead went up to 4 minutes. 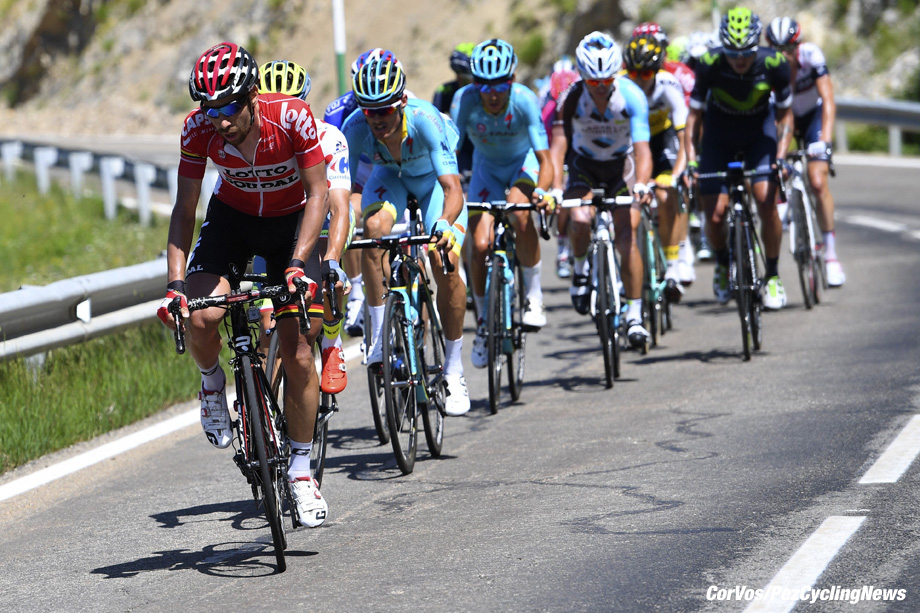 Port del Cantó
The second climb of the day, the Port del Cantó, started from the town of Sort after 67,5 kilometers at 691 meters altitude and summits at 1,721 meters after climbing for 19 kilometers with an average incline of 5,4%. Sky were in control of the chase, but the lead had climbed to over 5 minutes. Alberto Contador was not comfortable and was talking a lot with his team car, it was said that he had a fever during the night. Talking of abandonments: Mark Renshaw (Dimension Data) and Matthieu Ladagnous (FDJ) both gave up the fight.

As you have all heard by now, Chris Froome was fined 200 Swiss Francs for his hitting a Colombian fan who was running next to him on stage 8. Opinion seems to be split between “well done, the guy deserved it” and “Froome was well out of order to punch someone in the face.” In Froome’s defense the guy was very close and had a flag in his hand which, Froome claims, could have gone into his front wheel. On the other hand, he could have just given the Colombian a push to the side.

With 100 kilometers to go, Alberto Contador climbed into a masseurs car and waved goodbye to the 2016 Tour de France. Olympic Games, Vuelta a España? He needs time to recover.

At the top of the Cantó, there was a hard fight for the maximum KOM points between Thomas De Gendt (Lotto Soudal) and Thibaut Pinot (FDJ), the Belgian took the points this time. Mountains leader Rafal Majka (Tinkoff) was happy to leave them to it taking 3rd, probably hoping to gain more points later in the stage/race. The peloton came over the summit 6 minutes 58 seconds later. 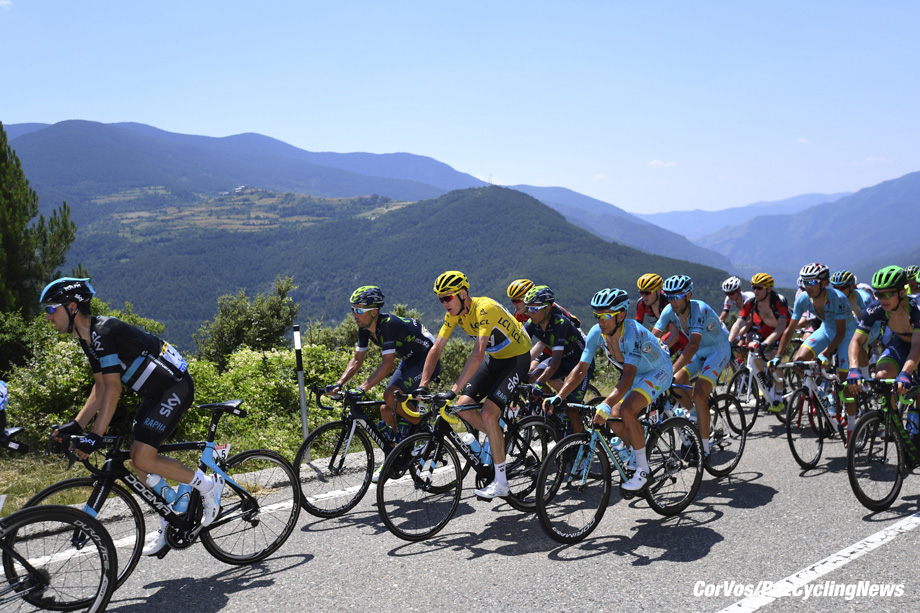 Côte de la Comella
Nothing much happened between the Port del Cantó and the next climb of the Côte de la Comella, except for the sprint in Andorre la Vieille after 138 kilometers and the abandonment of Cedric Pineau (FDJ).

At the sprint Peter Sagan took full points without any trouble, this moves him up to second in the green jersey competition 7 points behind Mark Cavendish (Dimension Data) who was back in the peloton 10 minutes behind. Sagan sat up and waited for the peloton.

First to attack was Coppel with Grmay jumping after him, but it was De Gendt who escaped on his own for the KOM points and he had 30 seconds on the others as the race headed towards the Col de Beixalis and Its steep and twisty ramps. 6,4 kilometers of a climb to a height of 1,796 meters.

Col de Beixails
The gradient was too much for De Gendt and the remainder of the lead group passed him as if he was stationary. Back in the small peloton (about 30 to 40 riders), Sky were riding with a bit more enthusiasm and pulled the lead back to less than 9 minutes. The top men were still there: Froome, Quintana, Rodriguez, Yates, Valverde, Aru, Nibali, Dan Martin, Porte, van Garderen, but Barguil and Alaphilippe had dug too deep and were in trouble on the steep inclines. Up front the lead group was down to 10 men and it was Bennet who put in the first move… and the second, but his move was held by Majka and Pinot.

Bennet was not finished and put in another hard kick to be joined by Rosa, Pinot, Majka, Costa, Frank, Edet, Navarro and Anacona. At the summit Pinot took the points from Rosa and Majka. The peloton crossed the line at 8:10. 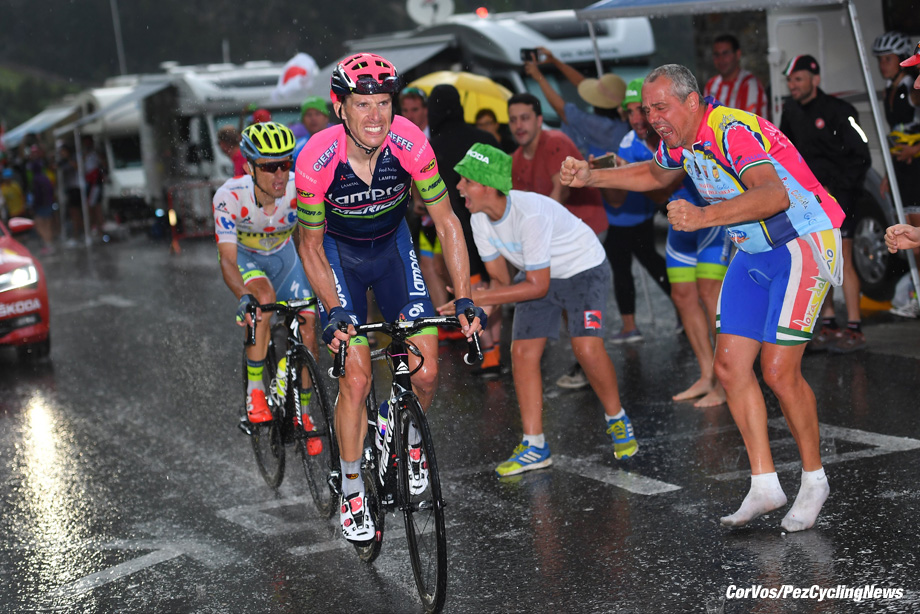 Andorre Arcalis
With 16 uphill kilometers to go, Navarro attacked along with Majka, the move failed, but Navarro was not giving up and he tried again, this time his move dislodged Majka, Costa and Rosa, the climb to the finish had not properly started.

A lull in the action allowed the 10 riders to get back together with 13 kilometers to go, just in time for Tom Dumoulin to push an enormous gear to ride off on his own on a false flat. The others in the break could do no more than watch.

10K to go and Dumoulin had 53 seconds on the Majka/Pinot group and 9:10 on the peloton. Pinot was getting annoyed with the others lack of help to pull back the big Dutchman and put in a couple of attacks, but it was Costa who took a gap and Majka left the chase to the Frenchman, Pinot.

6K Out
Dumoulin was still forging on solo as Pinot cracked and Majka left him to catch Costa to try and pull back Dumoulin as a torment of rain swept the Andorran roads. Majka and Costa were working well together, but the Dutch time trial specialist was in the zone and pumping the cranks round. 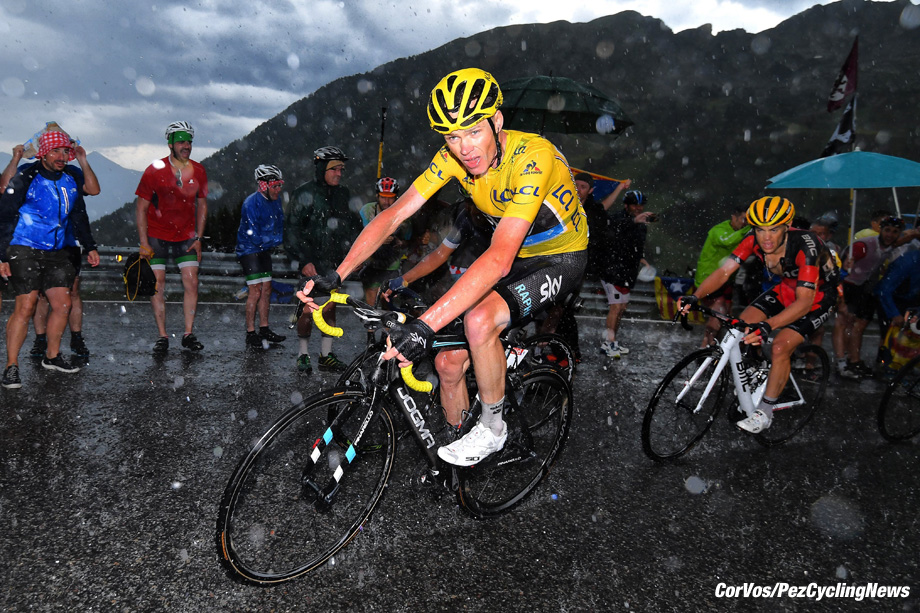 Sky’s Sergio Henao attacked the GC peloton and no one chased at first, but the job was taken up by Richie Porte for Tejay van Garderen. It was a preemptive move as Chris Froome jumped with Quintana on his wheel. Porte was in form and gave another kick, which sent Dan Martin up the road and forced Froome to hunt the Irishman down. Of course this split the chase to pieces as Bardet and Yates were the only riders able to react immediately, the others had to fight their way back.

Porte again attacked and this time it was Mollema who closed the Australian down.

Dumoulin rode into the the final straight with no one insight behind him to cross the line exhausted with a lead of 38 seconds ahead of Costa and Majka.

Dan Martin was in an attacking mood and had Froome, Quintana, Porte and Yates on his wheel. Porte and Froome traided punches at the front coming under the 1K to go which put Martin in trouble. Porte led them towards the line, but it was Yates who sprinted past the others to win from the top GC riders group. Van Garderen, Aru and Barguil were the losers of the stage. 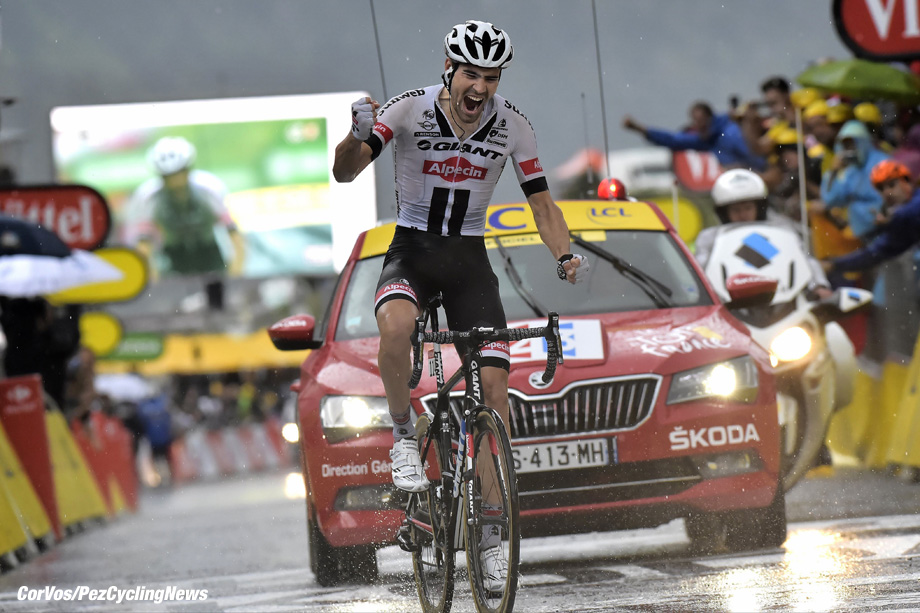 The day belonged to Tom Dumoulin, Yates and Quintana looked strong and Porte must be regretting his puncture and lost time as he obviously has the form. Chis Froome was never in trouble and made some good moves. The only rider who followed the wheels and told us nothing was Nairo Quintana, he looks to be the only rider who can worry Froome and his Sky team.

Keep it PEZ for all the best Tour news and video catch-up in EUROTRASH Monday. 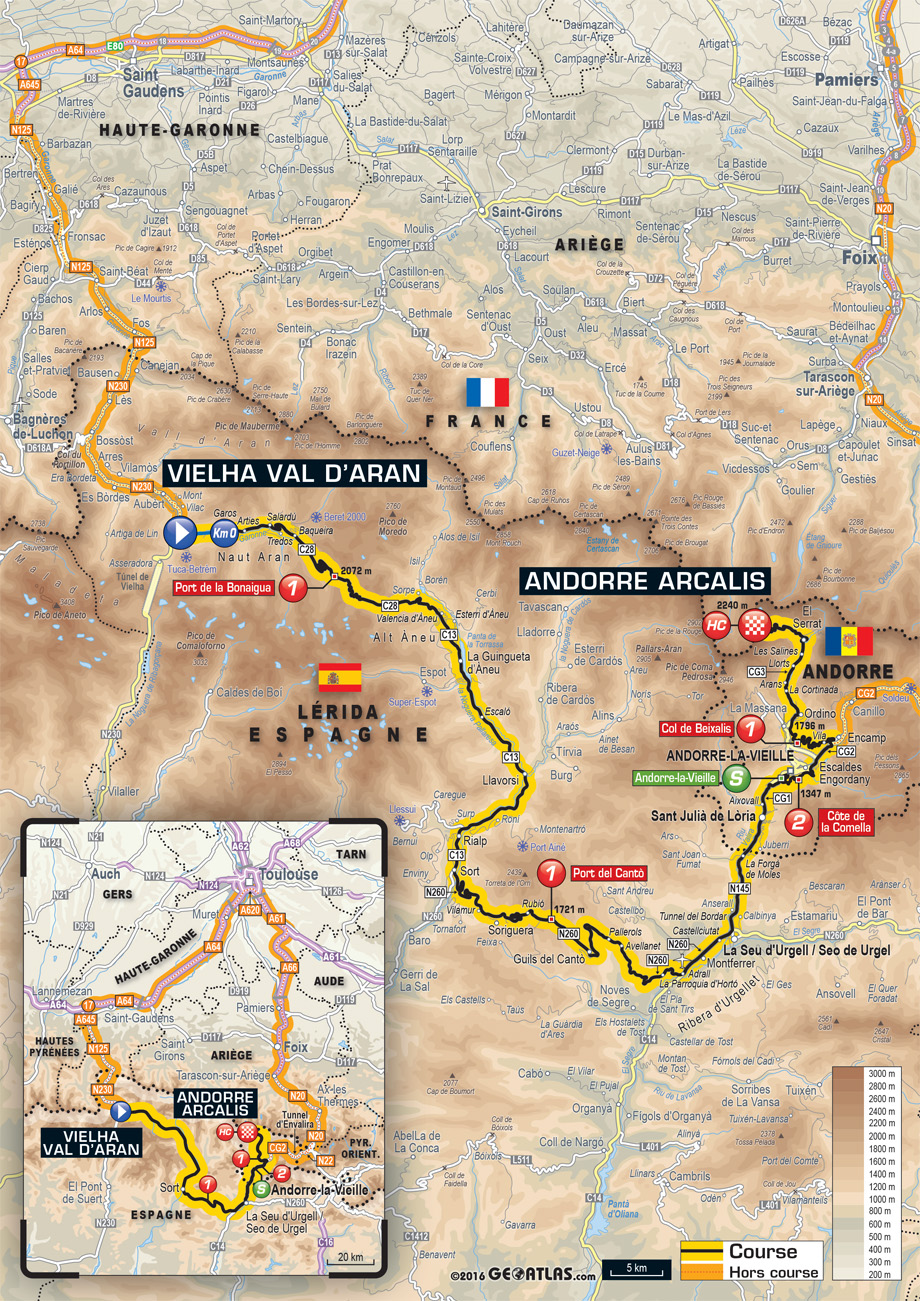