Race Report: Looking and looking for Cavendish, the diminutive Manxman popped out at the last moment and drag-raced Kittel to the finish, taking his third stage of this Tour, his 29th overall and promptly dedicating the win to his new niece. Into a fantastic third spot ahead of such names as Kristoff was Dan McLay and he must surely be a name for future glory.

“I didn’t really think about that. I’m just thinking about my little brother, he had a little baby girl yesterday. So I’d like to dedicate this to my little niece Darcy who was born yesterday.” Mark Cavendish 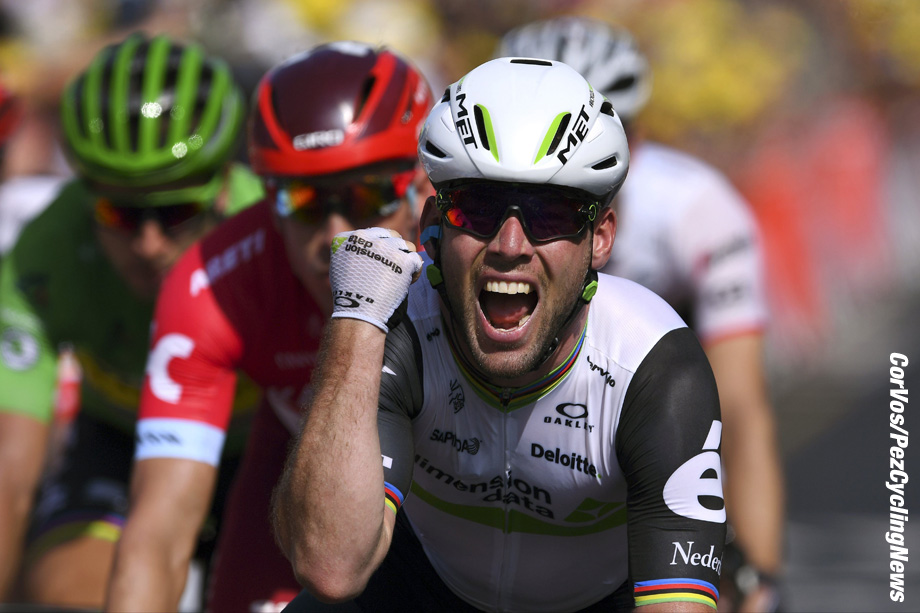 With a week of sprints many said that the ‘real’ Tour would start yesterday as the race headed into the first climbs of this year. Against the script though it was a rouleur who pushed ahead and took the race by the scruff of the neck while the main men behind watched and waited.

With sprint stages fast running out, and a flat finish today, it was tipped to be a day for the fast men and one big name was still to get his name on the winners’ sheet…would André Greipel (Lotto Soudal) finally get it right and make his mark beside those of Cavendish (Dimension Data), Sagan (Tinkoff) and Kittel (Etixx – Quick-step)?

Slow Start
From the gun two men headed up the road and the peloton was content to let them go. Once again it was Jan Barta (Bora-Argon18) who is getting used to riding ahead of this tour. Today he had Yukiya Arashiro (Lampre-Merida), the first Japanese rider to ever complete the Tour, along for the ride and the two men set about building a lead.

With a sprint romp expected BMC were getting loads of help from Etixx and Dimension Data to keep the gap within manageable limits and it hovered around the 4-minute mark for a large part of the stage.

And that was the way it stayed as the peloton went to sleep…by the sprint point at Montbazens the two leaders had shared the KOM points over the first two climbs and it was the Czech veteran who took maximum sprint points. The race though was running some 10 minutes behind the slowest schedule so the riders were definitely taking it easy over the 190kms before they meet up with the Pyrenees in the days to come. 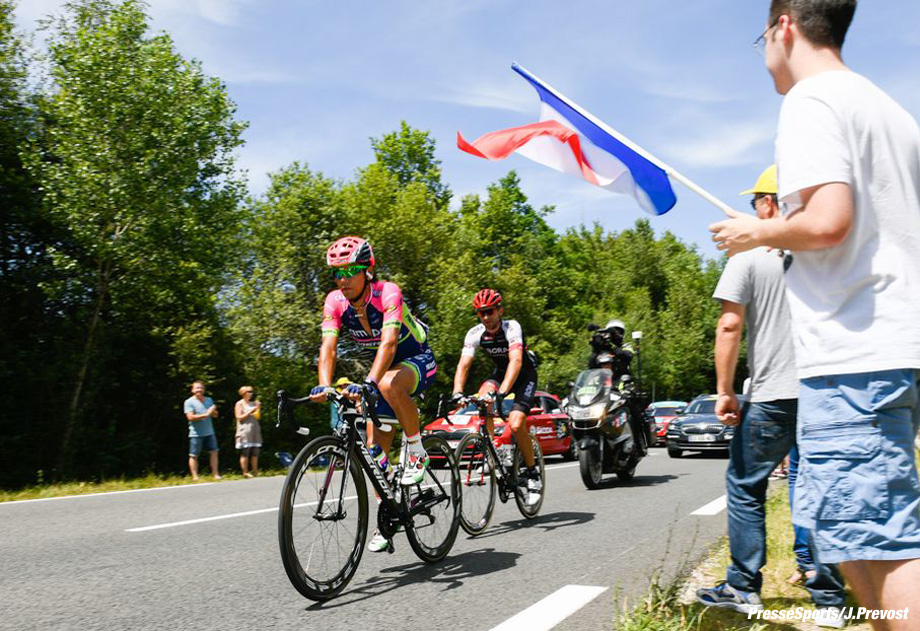 Flicker of Life
And finally some action as the Green Jersey contenders fought it out for the rest of the points and it was Bryan Coquard (Direct Énergie) who bested Matthews (Orica-BikeExchange) and Sagan with Kittel, despite the benefit of a lead out, trailing over at the back of that little group. Cavendish had been up there but had decided not to get involved in the end.

With not a great deal happening out on the road, all the chat in the press room was about the apparent implosion going on at Team Tinkoff. With the squad disbanding at the end of the season there’s been quite a bit of intrigue going on…Roman Kreuziger apparently was supposed to wait for his leader Alberto Contador yesterday but due to a ‘communication error’ left him on the final climb and is now higher up in the GC. He’s not part of any deal that Contador will make with a new team so the suspicion is that he’s riding for himself…and that can only spell disaster for team harmony for the rest of the race, and the others still to come.

Inside 90
With the race still meandering southwards BMC was at the front of the bunch but now we saw the first appearance of Lotto Soudal adding to the work as Greipel sent a rider forwards to work with those of Etixx and Dimension Data.

The gap to the two leaders was now down to 3 minutes but the race was enjoying decent temperatures and in no particular hurry.

And that’s the way it stayed as the race slowly wound down towards the final rise, after which the sprint trains would begin to get organized. Journalists were beginning to droop as they fought to stay awake and the television pundits became increasingly desperate to fill the empty minutes of coverage. 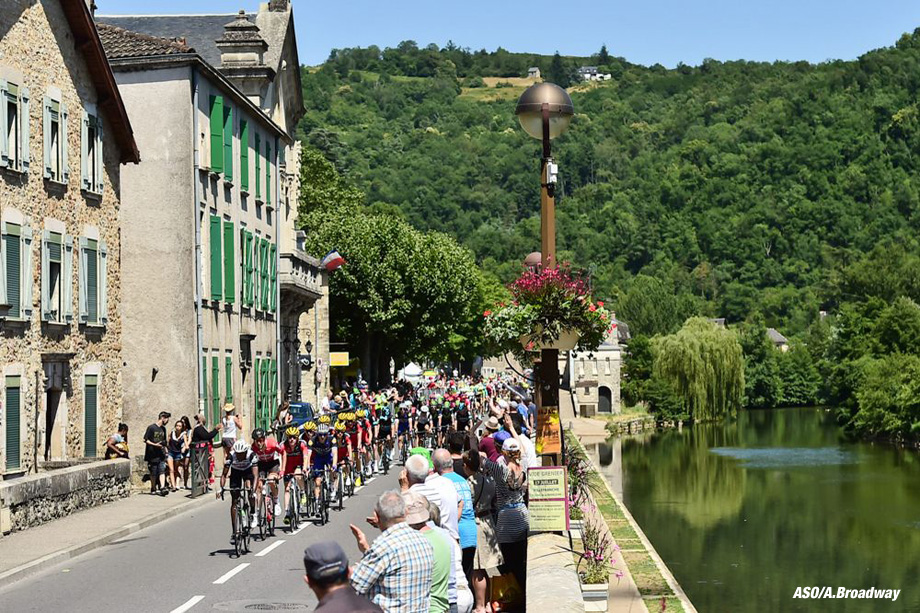 A Little Bit of Action
Coming up the final categorized climb of the Côte de Saint-Antonin-Noble-Val the two leaders were tapping out the pace while behind, Thomas Voeckler (Direct Énergie) was bouncing along at the head of the peloton as the gap had slowly come down.

Closing in on the summit of the 3rd Cat climb Jan Barta made sure of the points by sprinting away from his Japanese companion and Voeckler led the bunch over just 45 seconds down.

Not wishing to make the catch too early, and Barta keen to keep pushing, the gap went back out to 55 seconds but the sprint teams were beginning to get interested in affairs at the front of the race. On the arrow-straight roads the bunch could now see the escapees and would surely just leave them out there to die in the heat.

Change in Pace, Change in Mood
All of a sudden the big teams upped the pace as different squads came to the fore. Almost all of the Direct Énergie team were on the front being led by Voeckler but the GC teams were coming forward and making it known that they were now interested.

Team Sky had been brought up in the imposing form of Ian Stannard but Tinkoff, Movistar, LottoNl-Jumbo and Lotto-Soudal were all there or thereabouts. The two leaders were quickly overhauled with just over 20km to run and the sprint set-up was now on! The speed had definitely increased and some riders were now dangling off the back of the long strung-out line.

Quiet Before the Storm
With 15km to run the teams realized that they’d hit the front a bit early and they all reigned back a little allowing the stragglers to get back on. Nobody wanted to relinquish their position at the front but nobody wanted to be the first to kick things off either as they all watched each other, trying to make sure their sprinters were in place.

They were on the narrow roads on the run-in and the GC teams were just keeping it from getting crazy by spreading across the road and it was the Maillot Jaune himself, Greg Van Avermaet (BMC), who led the race under the 10km banner. 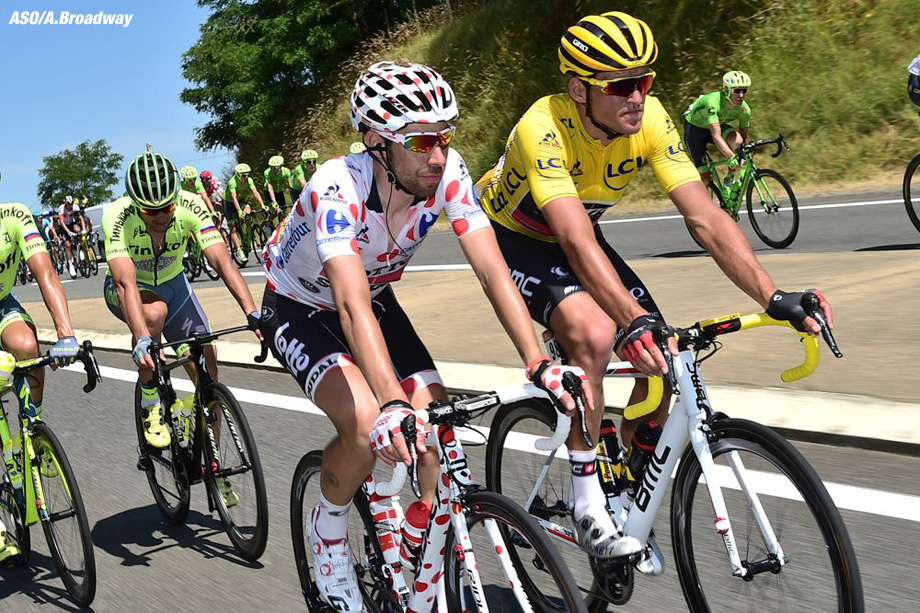 Two kilometers later and the situation hadn’t changed as everyone waited for the sprint gun to go off. Sylvain Chavanel was leading his Direct Énergie team in support of Coquard as three of the team, job done, slipped out the back of the bunch.

Sprinters to the Fore
With Luke Rowe and Ian Stannard leading their Team Sky leader Chris Froome towards the 3km safety line the sprinters were now coming forwards once again. First to move was Lotto Soudal bringing Greipel to the front to sit close to Bryan Coquard as Direct Énergie fought to hold their position,

Greipel looked nervous coming to head of the race with 4km to run but, as before, Etixx were going to play it late. Sagan was sitting on Greipel’s wheel as Dimension Data sought to bring Cavendish forward. Kristoff (Katusha) was looking strong as more and more of the fast men showed their colors.

Final K
With 800m to run and the sprinters coming towards their top speeds it looked as if Etixx had played their cards to perfection bringing Marcel Kittel to the front of the race… and then the diminutive figure of Mark Cavendish popped out from behind and went head to head with his German rival. They fought side by side for the final 30m and it looked as if it would go to a camera once again but then Cavendish proved why he is the sport’s greatest ever sprinter as he surged forwards and crossed the line to take his 29th Tour stage and move into the all-time second position behind the great Eddy Merckx.

Dan McLay (Fortuneo-Vital Concept) took a very impressive third and looked as if he might overhaul the lead pair but nothing was going to stop Cavendish taking his third stage win of this tour and reigniting his career, silencing the doubters in one fell swoop! 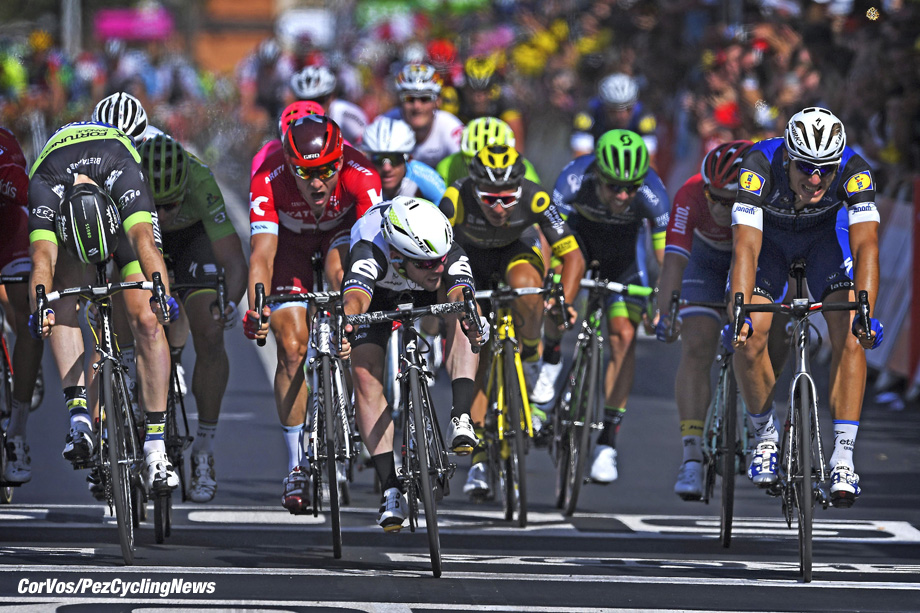 Greipel must be wondering what he has to do to win a stage in this race as he ended up completely out of it, his Lotto Soudal team being swamped on the final run for the line.

Into the Pyrenees tomorrow and the GC men will take control of this race but today belonged to Cavendish with his British compatriot McLay taking a fabulous third. Onwards, upwards and upwards!