Race Report: Steve Cummings made the Aspin look easy as he distanced his 28 breakaway rivals to take a famous victory and double up for Dimension Data. In a fast and hard fight, Cummings was in the action from the start and finished the job off perfectly with strength and cunning.

The first day in the Pyrenees promised much and although the GC battle failed to materialize it was a day of serious celebration for some and complete dejection for others. The first hour took the riders almost 50km from the start and the tempo didn’t let up from there, the victor, Steve Cummings took under four hours to complete the 162km stage. He went clear before the start of the Col d’Aspin and although an early acceleration from Nibali threatened to bring him back into the fold it was never in doubt for the Brit who just flew up the final climb to take his second victory in two Tours. It wasn’t such good news behind for Warren Barguil who looked in danger on the Aspin but came back to the main leaders on the descent, but it was a shocking day for Thibaut Pinot who sent his team to the front on the Aspin but was then undone with 2km left to climb, and lost three minutes to the main favorites. Greg Van Avermaet spent most of the day in the break and he extended his lead in the race to 6:36. 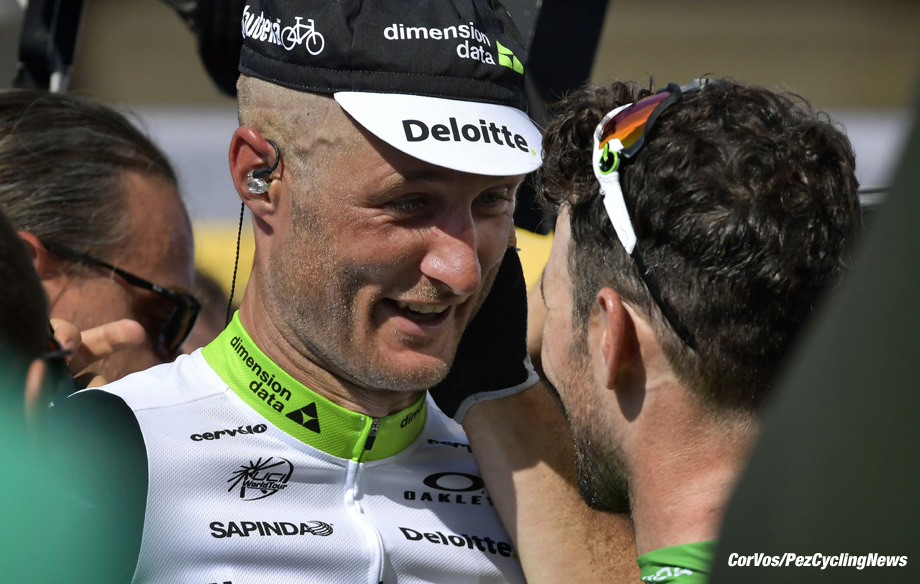 Dimension Data – The happiest team at the Tour

It was announced before the Tour that the British Cycling Team, and their Sky selectors, won’t be taking Cummings to the Olympics for the road race. You wonder how long until they renege on that decision. 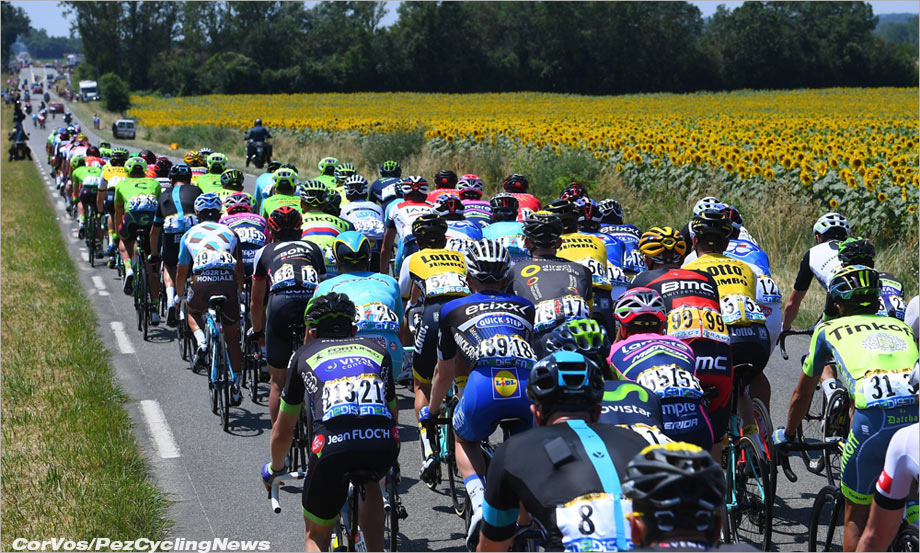 The calm before the climb.

Route
The first week has been lumpy but it becomes fully mountainous on the first Friday of the race. The stage is 162km long but all the action and climbing are stacked into the final 19km with an ascent of the Col d’Aspin followed by a fast descent and short climb up into Lac de Payolle.

The stage starts on the plains of the Gers region but the peloton will be climbing for virtually the entire stage until the summit of the Aspin when they will finally get a chance to test out their descending on the baking hot Pyrenean roads. 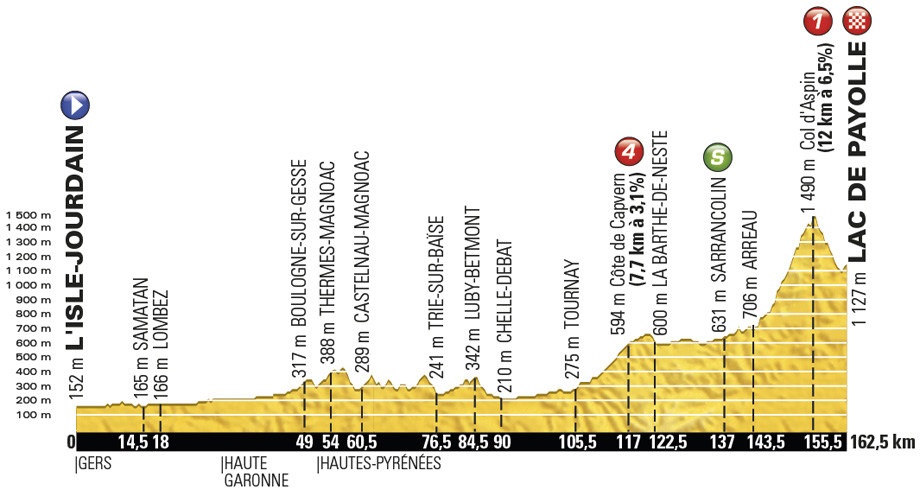 The overall favorites had exchanged body blows in the first six stages but they enter the first major test with only Vincenzo Nibali (Astana) out of contention and Richie Porte (BMC) and Alberto Contador (Tinkoff) both suffering early time losses. Greg Van Avermaet (BMC) starts the day in yellow with a hefty head start over the true climbers.

After the hard start to the race the peloton were content to let the break’s lead stretch beyond the five minute mark as they set their sights on the main battleground of the day, the Aspin. 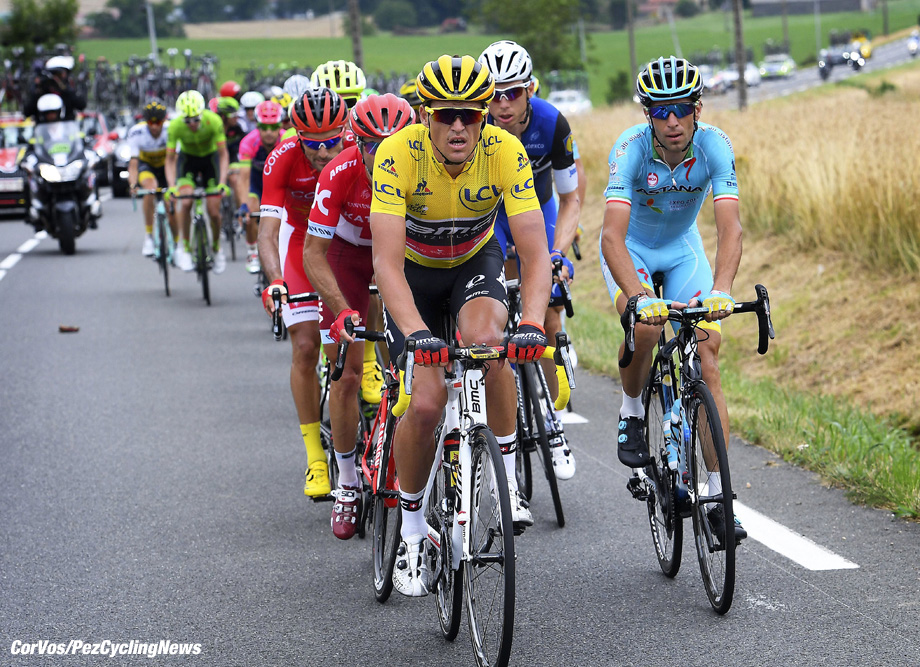 Our Discontent
As Vincenzo Nibali led the break over the Cote de Capvern, with 45km to go, their lead had begun to ebb away and stood at 4.15 with the Sky led peloton closing hard. After all the work they’d done to get into the break there were clearly participants who were unwilling to fall back into the peloton so easily. Duchesne, Breschel and Navarro were the first to go clear on the false flat run towards the Aspin. Steve Cummings was the next rider to go clear and link up with the leading trio.

The front group’s co-operation was in question as Cummings went clear, chased by Navarro with a much reduced group, featuring Van Avermaet, chasing behind. Despite the implosion of the break they were actually gaining time on the GC team led peloton behind. Cummings had a 33 second lead as he hit the base of the Aspin.

Nibali wasn’t waiting around for Aru though and he hit the front with only Howes, Navarro, Impey and Van Avermaet able to cling on. Despite the Sicilian’s injection of pace he’d only succeeded in chipping five seconds away from the Brit’s lead. In the chasing peloton the teams of FDJ and IAM Cycling were mounting as they too hit the base of the Aspin. Arthur Vichot (FDJ) was the first to be sacrificed in support of Thibaut Pinot and his pace immediately distanced the flat men who were happy to sit up and ride to the finish.

Up front and Howes was no longer able to stick with the pace as he fell away to leave just four riders in the Nibali chase group. They still weren’t making much impression on Cumming’s lead though as the canny Brit flew up the first major climb of the Tour. 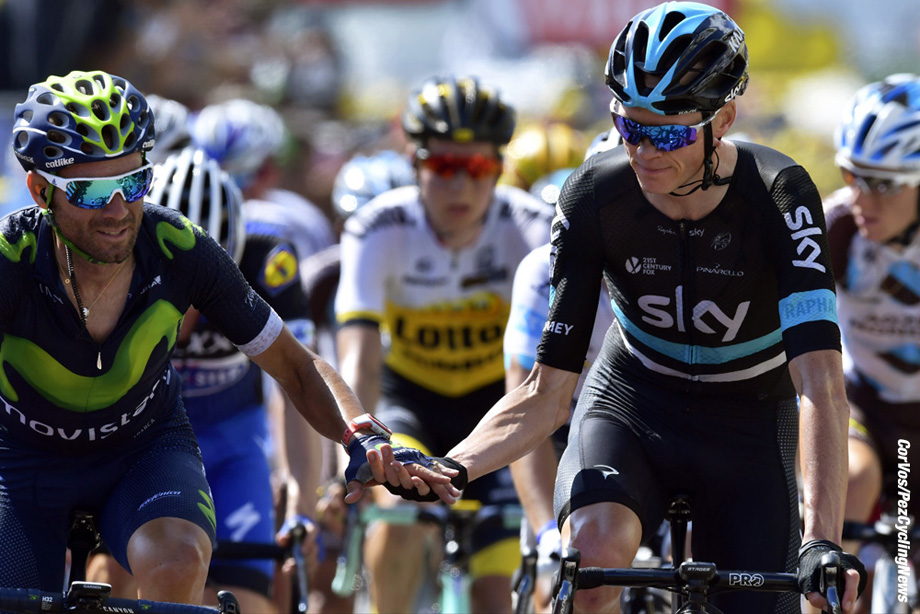 The GC Hots Up
Van Avermaet had valiantly hung on but after one final Nibali acceleration he was sent packing from the chasing group. Impey wasn’t looking comfortable but Navarro was surprisingly spritely and was the only rider able to contribute to the Italian’s pace.

Warren Barguil (Giant-Alpecin) was the first of the GC favorites to try and get away, surprisingly early, but he was brought back quickly into the FDJ led peloton.

Despite all of Nibali’s work he still wasn’t making any inroads into Cummings’ lead and in fact the Brit was now edging away. Behind, Van Avermaet had been distanced but he was bravely keeping the Nibali group in view and clinging onto his leader’s jersey.

The FDJ pace was high but it hadn’t yet taken any serious scalps. There had been no attacks either as the main favorites were happy to plough on in the wheels of the French team. Their efforts were also failing to have any impact on Steve Cummings as he just continued to plod away at the front of the race, knowing that as long as he didn’t crack he would make it two stage wins from two for Britain.

After doing all the work, there was drama as FDJ team leader, Pinot, began to fade near the top of the Aspin. His peril was seized upon by Domenico Pozzovivo (AG2R-La Mondiale) who took off in pursuit of the uncatchable Cummings.

There was drama up the road though as Nibali, who had done almost all the work was unhitched by Navarro and Impey. The South African almost immediately found the going too tough and it was now Navarro in pursuit, but with a deficit of one minute, of Cummings. The Brit was entering the bordered section at the top of the climb and barring any incident he was going to descend to glory. Navarro and a resurgent Impey were the next to the top but they were almost 1km behind the leader.

Behind and Julian Alaphilippe (Etixx – Quick-Step) was the next to try his luck, he linked up with Pozzovivo and they began to forge clear of the Sky led group. They were brought back with 200m left to climb just as Barguil began to fade and head backwards. After his young team mate had been caught Dan Martin (Etixx – Quick-Step) was the next to attack as they crested the climb. 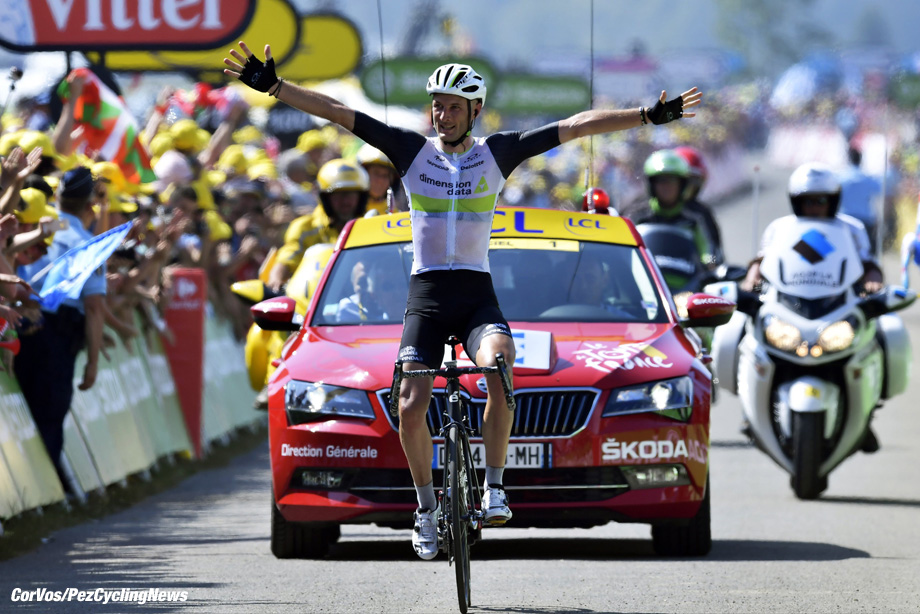 Another solo win for Cummings

Dani Navarro and Impey were the next to hit the finish line, the Spaniard had done most of the work but he was pipped at the line by Impey. Nibali was the next home, he would’ve been disappointed with a fourth place after infiltrating the early break. He was followed in by Van Avermaet who had put together an astonishing ride to hold onto his yellow jersey.

There was disappointment for Pinot as he failed to claw his way back to the peloton and lost three minutes to the group of the main favorites. For the second year in a row it looks like it will be a case of lost opportunities for the Frenchman.

Adam Yates (Orica-BikeExchange) didn’t show on the original result due to the 1K to go banner falling on him. He needed four stitches in a cut chin and has other injuries. The race jury gave him the time for the position he was in at the time and so he moves up to 2nd overall and now has the white ‘Best Young Riders’ jersey. 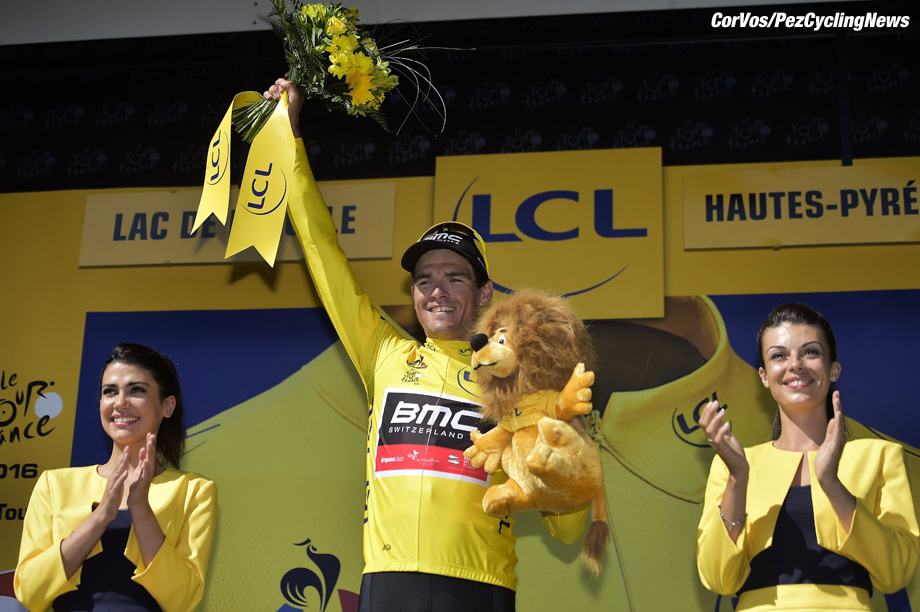 Keep it PEZ for a full weekend of Tour action. 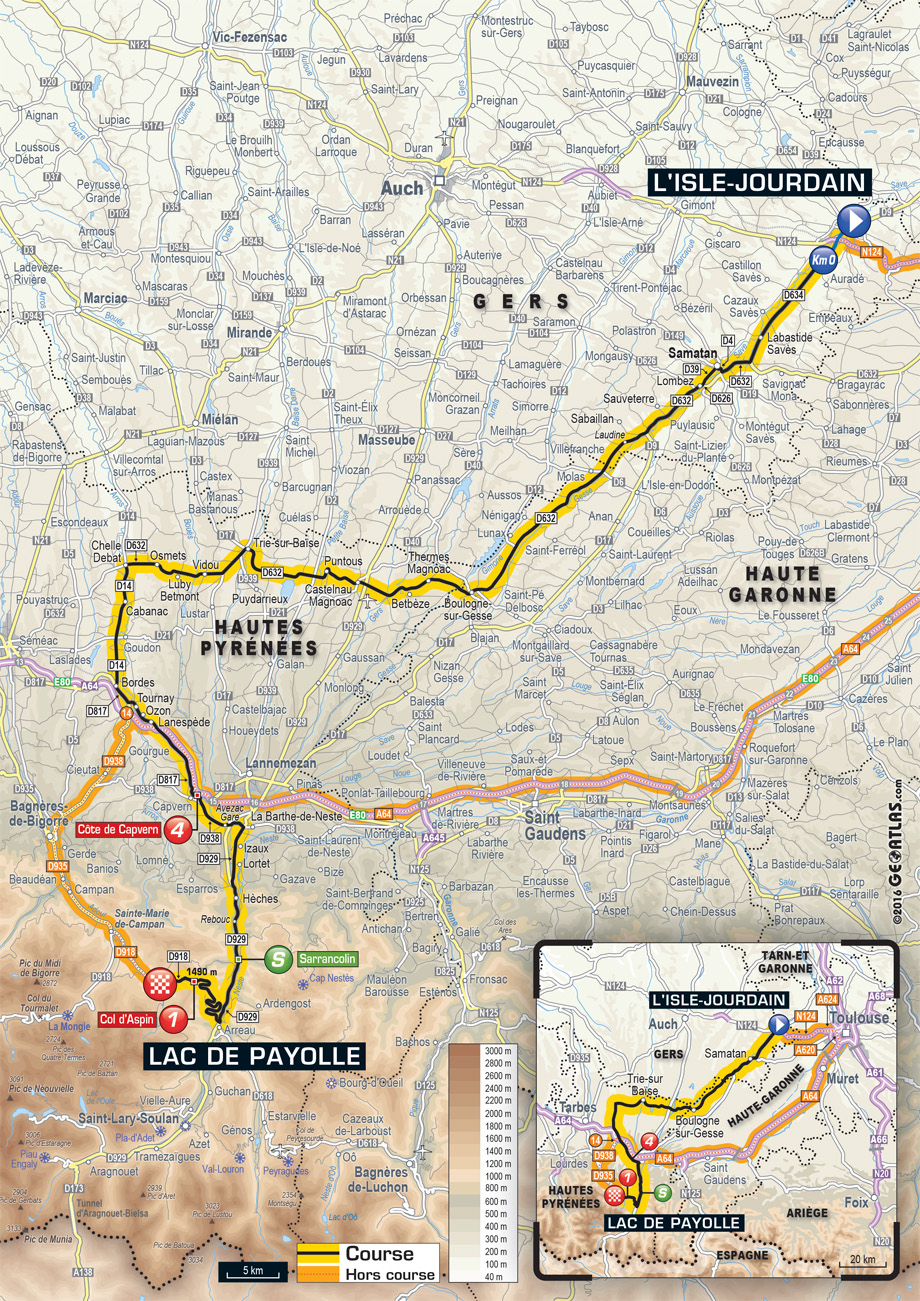