I knew it was a good Tour when only a couple days in I’d already lost track of the days, and by the end of the week I actually couldn’t remember what I’d done just three days earlier. It was my first Tour in 11 years, and this was our final day on the race – destination Briancon, via the Col du Lautaret.

The curtain’s closed and the dust has settled back at PEZ HQ on what’s turned out to be a pretty good Tour – filled with surprises and entertaining days. My own enjoyment of the race was celebrated with my return to the roads of France for the first time since 2003 to dispatch daily roadside reports from stages 7 – 14.

Covering even a week is a huge undertaking – especially when our love of the race is so connected to being fans. A bike race is still a bike race, and with so much tv coverage these days, it’s easy to find the results and watch the sport play out on a flat screen near you, but for me the race is about so much more – to quote faux director Marti di Bergi of Spinal Tap fame – it’s really about the “sights, the sounds, and the smells” that set the stage for the passing of what amounts to a multi-colored 60kph serpent that’s come and gone in 60 seconds.

For me the Tour is about being there.

But capturing these sights, sounds and smells takes a full day of doing stuff – always with a mission in mind, even though it changes sometimes hourly, and more than once it was 10:30 at night before we were finally on our way to find dinner. So by the time we’d reached stage 14, I was kinda cooked. 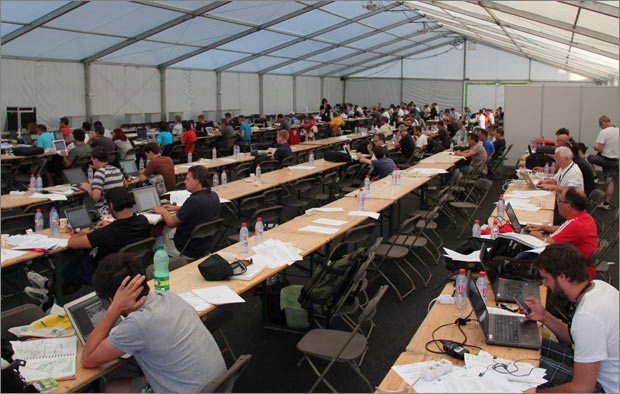 My day on stage 13 was a long one – I rode my bike over the col de Palaquit, pedaled alongside Oleg Tinkoff for a while, ground out my bottom gear for a whole lot longer than I’d planned and hauled my carcass over the 14kms to the 1154m summit. The 13km descent down to Grenoble was a blast, and would have been even better without the gauntlet of straight-arm whistle blowing gendarmes commanding me to stop every few hundred meters. An unplanned side trip to find petrol delayed us enough to get stuck behind the caravan for the drive to the finish in Chamrousse. At the top the press room was 3km away from the finish, and the press shuttle service completely failed in the post-stage traffic jam that plugged every exit off the mountain. By the time I sat down in the press room, it was 6:30, and after posting several race photos to PeloPics, I’d nary a creative thought left in my body. It was 8:00PM, showers & dinner were a very distant thought. Then just a few Kms into our descent off the old Olympic ski station, we caught the Tour’s podium trucks inching their way outta here… and there we stayed for 15 more kms.

So as stage 14 dawned, it was with mixed emotions that we joined the usual traffic plug to get the few kms from our hotel to the stage start, and one final look at the village depart for my shift on the Tour. 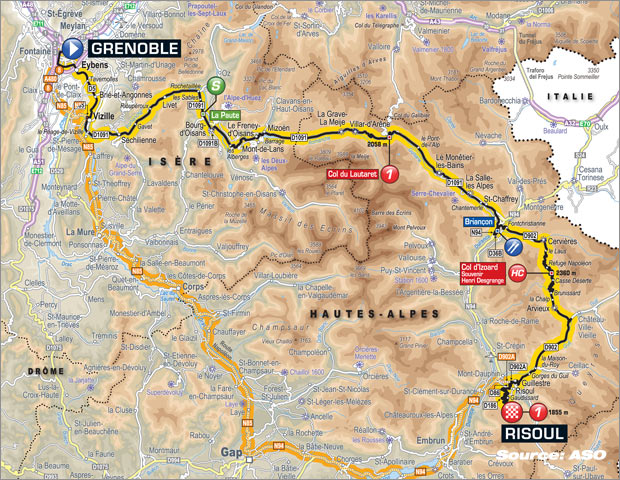 This was the queen stage of the Alps – 177km from Grenoble to Risoul, and three big climbs over the Lautaret, Izoard, and to the summit finish at Risoul, and our plan was to drive the stage as far as Briancon, watch the race hit the bottom slopes of the Izoard, then point the car for Italy, and pass the Pez Roadside baton to Ed in Carcassonne

After covering cycle sport for the past 12 years, one of my favorite parts is the constantly changing view from inside our car as we drive each stage. It’s like watching a 4 hour program that repeats itself each day, but never plays out the same way twice. And it’s best to start in the village depart. 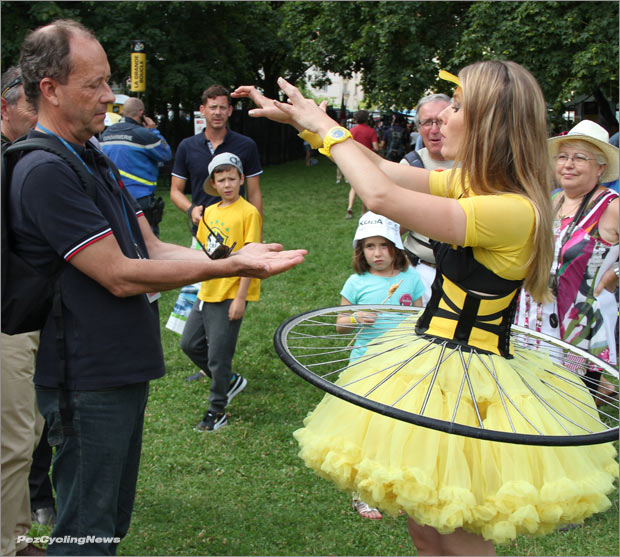 This lady with an impossbly cantilevered bosom was a daily part of the start village, and after ogling her for days, I decided to man-up and find out what she was up to. As an “animateur de la Tour”, she was here to entertain. Beyond her appearance, there was magic in her fingers too, as she somehow managed to make my (and several other willing participants…) sunglasses flip over in our hands. 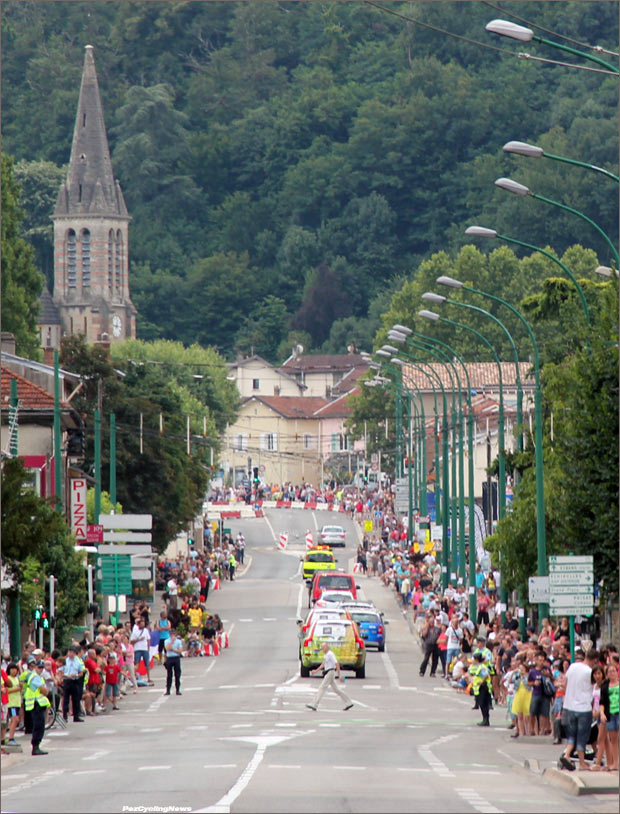 But soon enough the 30 minute warning bell rang and I snapped off a few more photos of the team busses, bikes and riders as I jogged back to the car to start our last stage. We pulled onto the course, and the most relaxed driving part of the day, as the closed roads seemed to be the only way to get through the Tour without being stuck in traffic.

The parcours climbed almost constantly from Grenoble at 312m altitude to the top of the first pass – the 2058m Col du Lautaret – some 80kms distant. The actual climb is rated at 39km long at 3.9%, but man that is a long time to be going uphill, and I was happy to be in the car for this one. 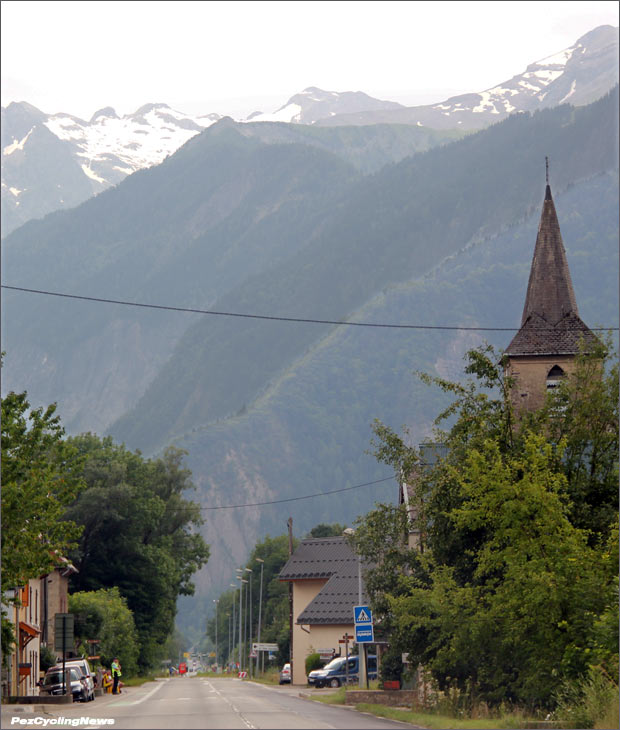 The Tour always comes through this region, and legendary climbs are around every bend – only 41km in and the course passed through Bourg d’Oisans and by the road up Alpe D’Huez. A few kms further along and it’s Les Duex Alpes – where Pantani sealed his Tour victory in 1998. The D1091 makes an abrupt left turn here and the first real slopes of the climb to the Lautaret rear up as the roads snakes its way up the Val d’Isere. 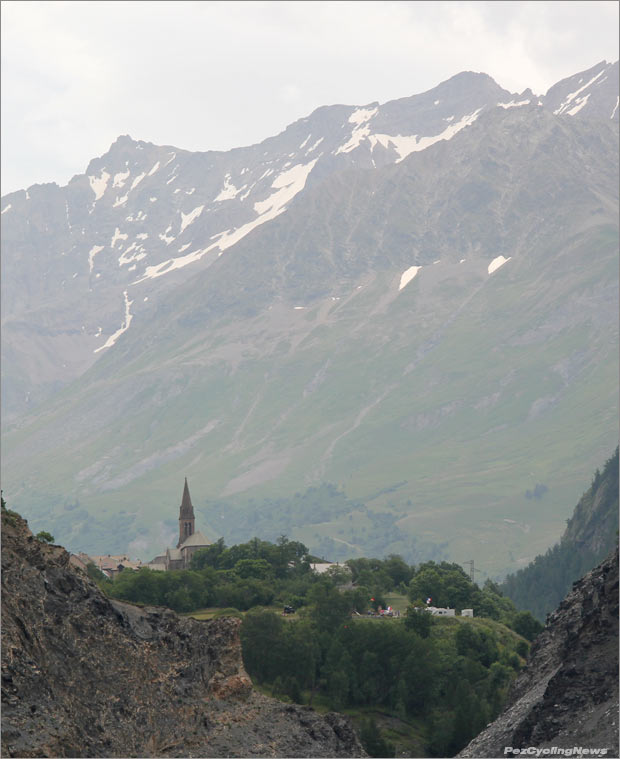 It’s beautiful country and the majesty of the Alps surrounds – it’s a breath-taking part of the world and I sit in awe as the high peaks of the Massif des Ecrins keep watch from the right. I drove through here in 1990 after seeing the Tour finish on Alpe d’Huez… there was a lot more ice in those glaciers back then. Those peaks reach over 3500 meters – that’s the roof of the Alps. 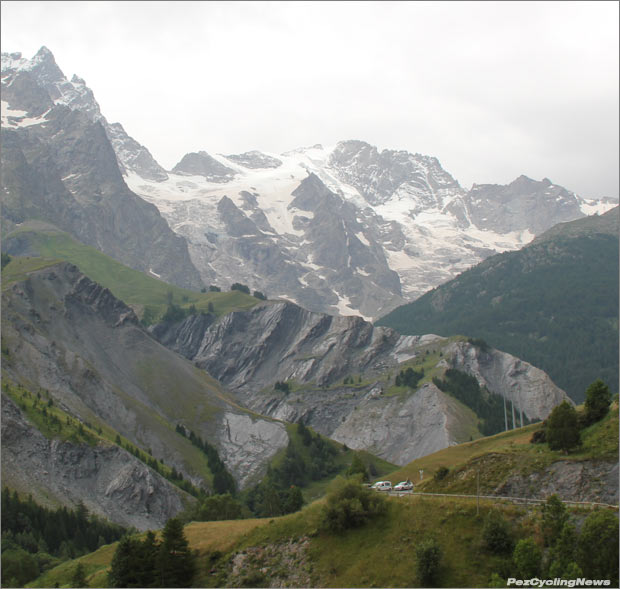 The weather has turned cool – a nice relief after the few hot days we’ve had. 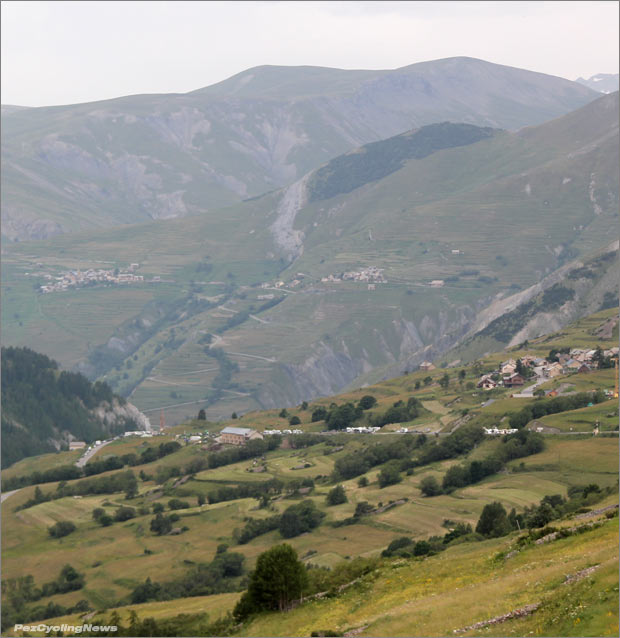 We stop for a selfie. Mino and I’ve spent almost every waking moment together since he met me at the airport on our way to the finish of stage 6 in Reims – we should have at least one photo for the archives. 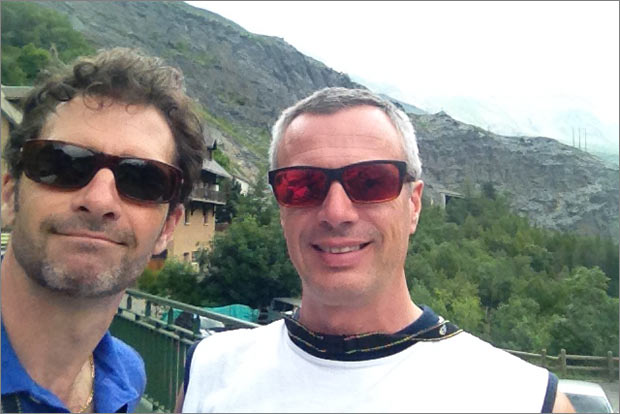 As we climb higher, the views out back of the car force a stop for a photo. The wind is up, but so are the fans. A few kms below the summit come the switchbacks, nothing serious to the racers, but some good vantage points for fans. 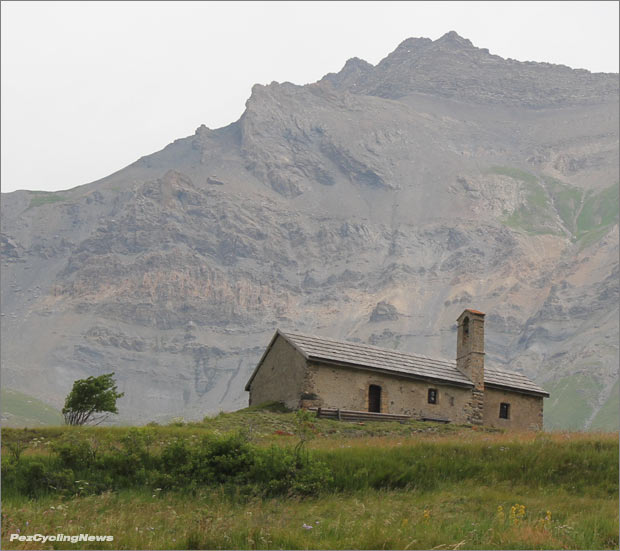 Off to the left is the mighty Galibier. I’d had it in my mind to ride it for the first time, but after two days of big climbs, the legs confirm that I’ll be saving that one for next time.

The road flattens but we’re still below the KOM line. The road sweeps and turns ahead and my lens pulls it all in for what I think is one of my better (and luckier) snaps of the trip – it’s the Lautaret summit. 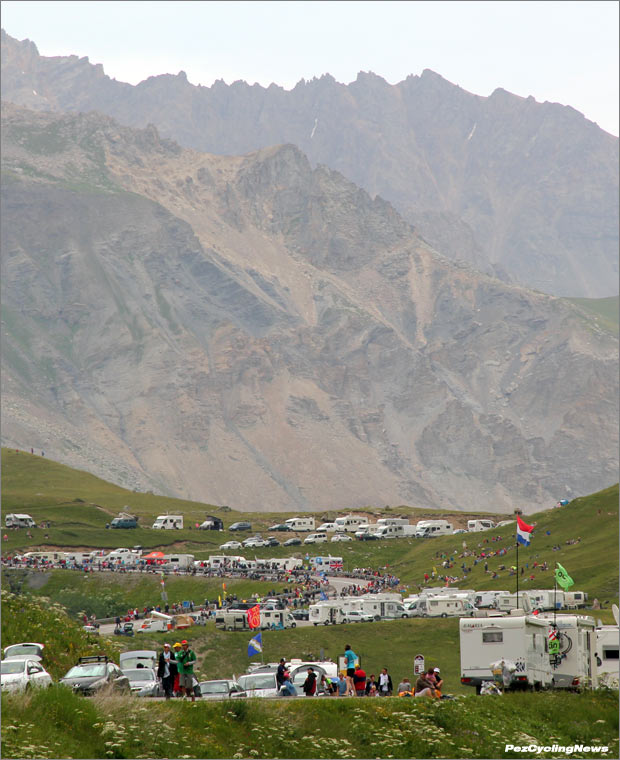 The crowds are thicker than I’d expected on a day with the Izoard and a summit finish still to come, but like we’ve seen all along this race, we’re not the only ones who love a good bike race and the campers have been here long enough to establish a small town – at least for a day or so.

Then it’s onwards to Briancon. The sun breaks through as we haul down the long straight road that cuts the valley. We’re getting close enough to Italy that I start to daydream about tonight’s negroni in Torino – a little reward I’ve promised myself. But before I get too excited we spot the Tour T-shirt stand. I’d also promised to collect matching Tour tees for Mrs. Pez and our girls, and this is my last chance. Mino pulls the Fiat over and joins me for souvenirs. 100 euros later I’m kitted up pretty good with a polo, cap, and tees for all… no point in coming all this way and not getting the t-shirt to prove it, right? 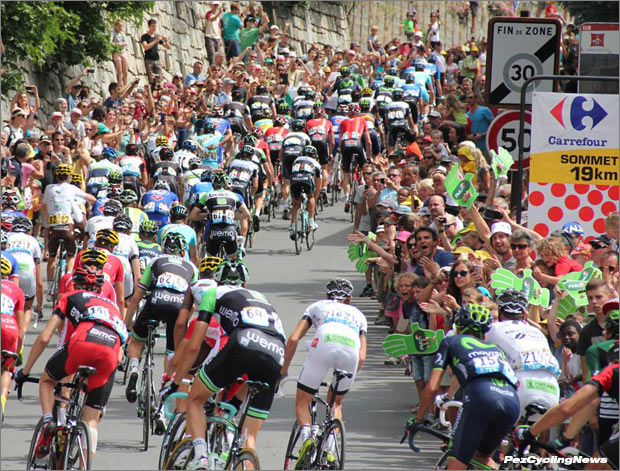 We find the best spot in Briancon – another oft visited Tour town. The Col d’Izoard north slope climbs straight out of the lower town square. The race comes – I notice the helicopters never give me as much warning as I want – the lead motos zoom through and here’s the break – three minutes later the whole rest of the race roars by and is gone.

Then it’s all over. The show is done. C’est finis.

Some huge days and some lifetime memories scored over the past week. No two days the same, but every one follows the same pattern. 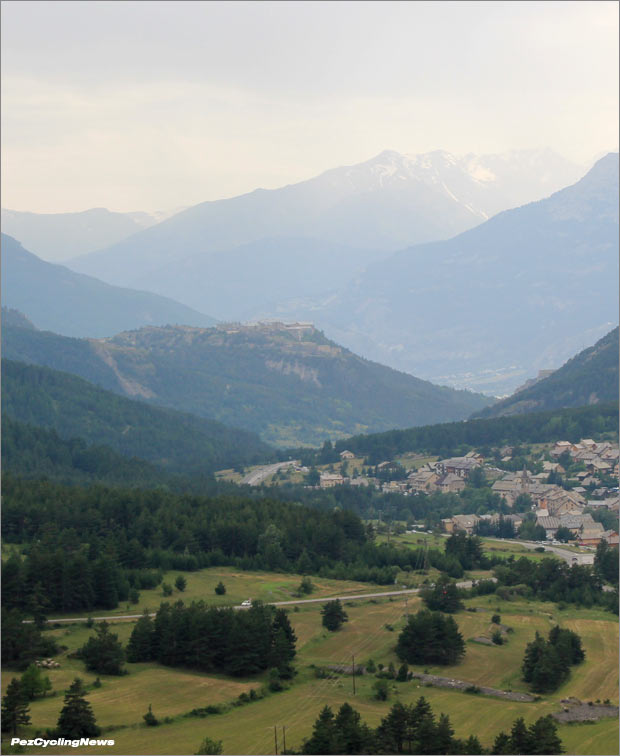 Mino points the car east, and as we climb to Montgenèvre the road winds up over one last pass before the long descent into Italia. I request a stop at the first “Autogrill” we see. The valley back to Briancon spills out to our right and I get him to pull over for a parting shot. Au revoir le Tour. 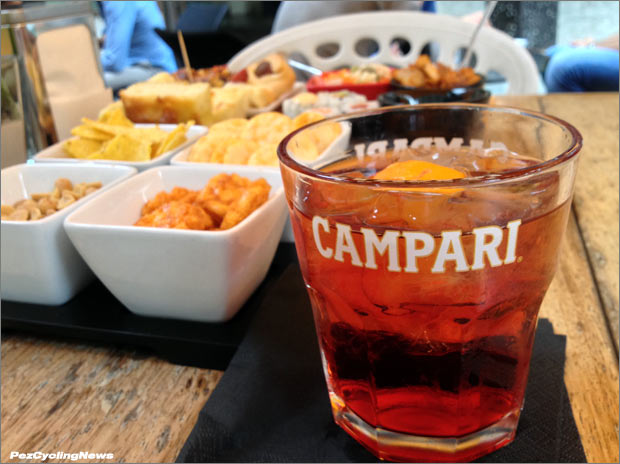