Roadside Stage 2: The cheese capital of the world might seem like an odd choice to visit when covering a bike race, but with Gouda on the route of stage two for this year’s Tour de France, we reckoned it was worth a look. As the biggest bike race in the world rolls into town, yellow jersey and all, it was fitting to check out a town at one with status symbols … 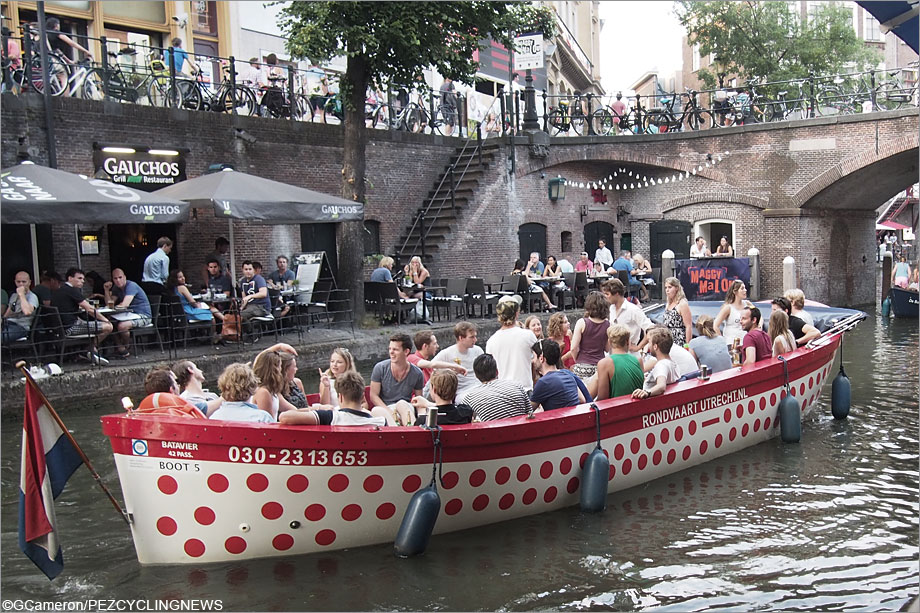 Last night, after three broiling days, we treated ourselves to a canal-side dinner, with our good friend Aki Karasawa from Sankei Digital Media in Japan. Aki is covering her second Tour de France, and she’s great fun, so we found ourselves a nice little Mediterranean restaurant to settle into. We managed to get a seat away from the hen party that seemed to be degenerating in a flood of tears, drunken singing and anxious text messages, so we could properly people watch.

The symbolism of the Tour is everywhere; yellow clothing, multi-colored bunting, the trees wrapped in yellow. 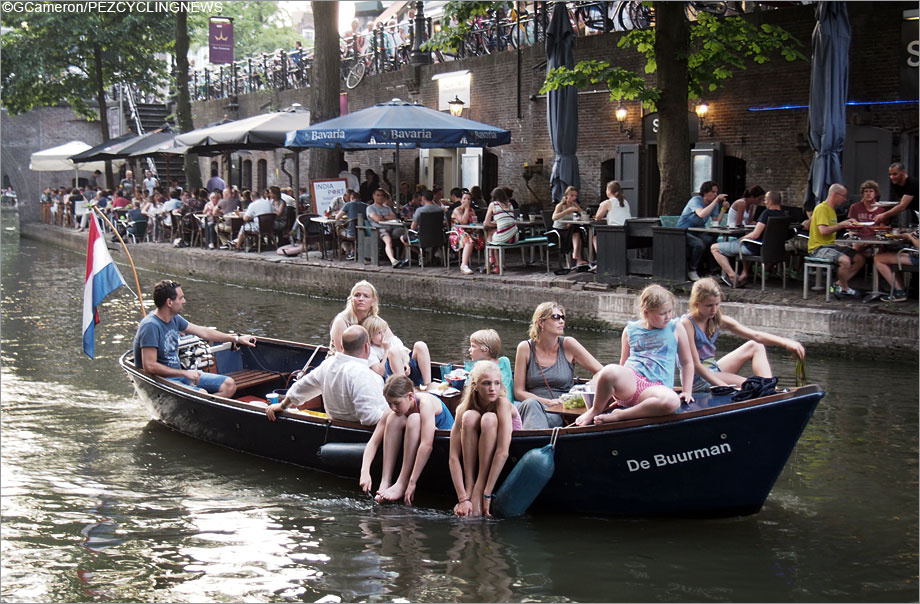 A flotilla of boats, canal cruisers, body boarders and general eccentrics chugged past all night – one contraption made of eight oil barrels and some flooring boards carried three drunks and a barbecue, which isn’t the ideal mix for a Saturday night on the waves.

Europop beats thump from the cars and bars, and everyone’s in high spirits; summer is here and the Tour is happening. 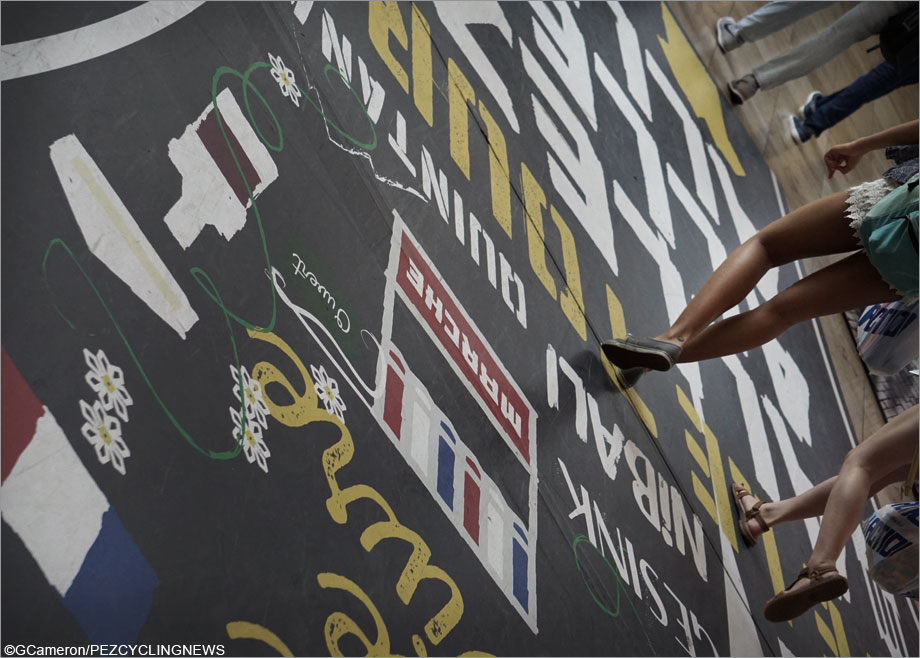 The way out of the Hoog Catherijne shopping complex has some apposite signage, and some very choice words from Henri Desgrange painted on the walls. 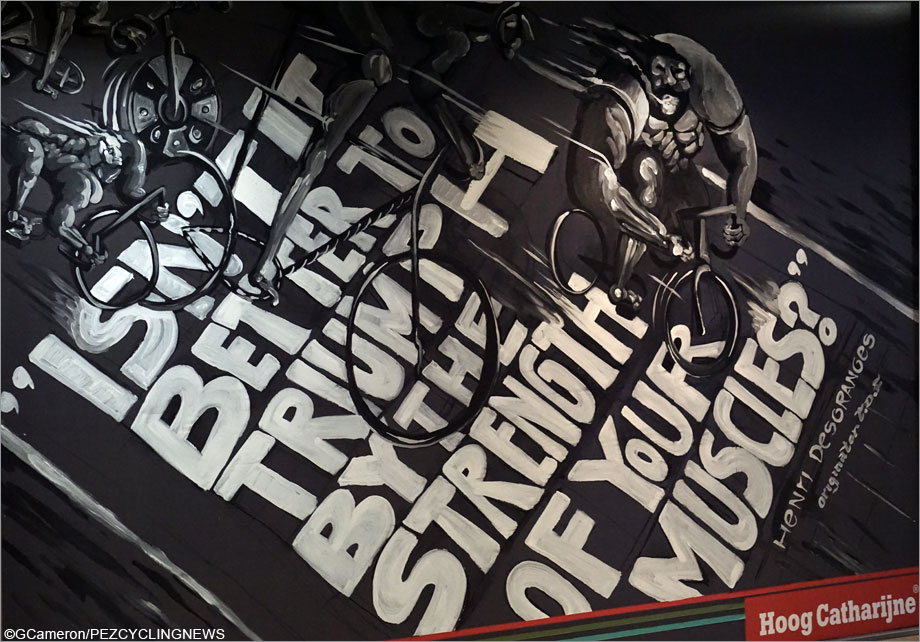 The man behind the Tour and the yellow jersey knew all about semiotics, and he knew about skullduggery as well. Too many people have known it’s better to rely on your own capabilities, but just in case someone else wasn’t so fair-minded it was advisable to make “extra sure”. Let’s hope that 2015 is a year Desgrange would approve of. 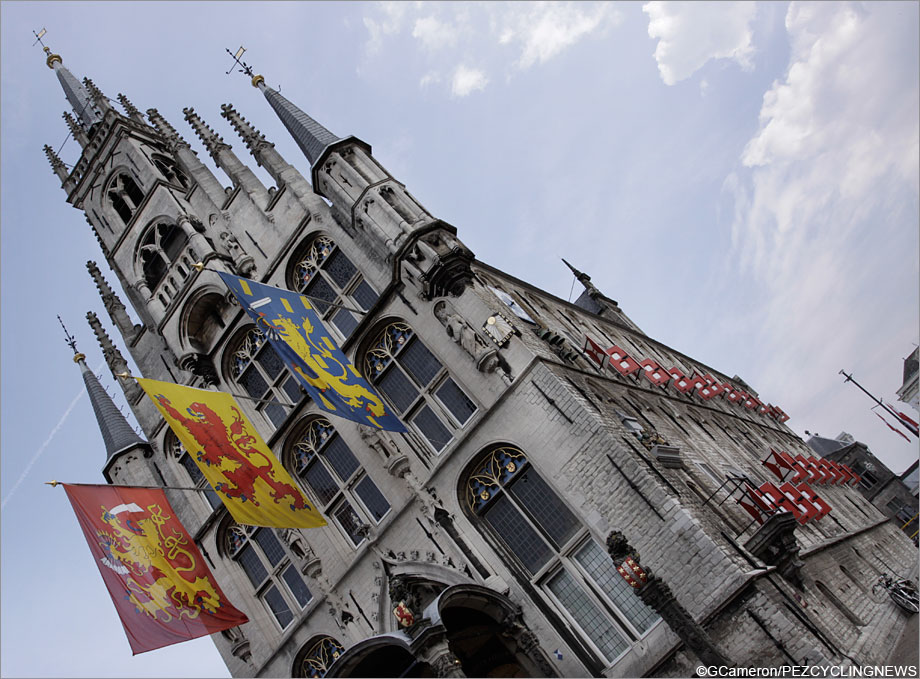 Sunday’s plan is to drive out to Gouda to see the race go by. We get there early and the town is still sleeping. I begin to wonder if we’ve come to some oddity, a parallel reality Gouda, but it’s the right place.

The Stadhuis is a spectacular building in the heart of town, built on what was a peat bog. I knew all about Gouda and cheese, but what I didn’t know was that the town was famous for clay pipes. The local picked up the habit from English traders, as it looked cool and smoking as expensive an import as tobacco was good for the image.

The trade died when people realised that wooden pipes would do the job better; the ceramic ones were too small and fragile, because they had been designed in the days when tobacco was an costly.

So, rather than sink without trace, the cermacists turned to more elaborate, status symbol pottery instead.

The town was also big in the candle-making industry, using stearine (plant-based) to create a good light with no black smoke. This meant you didn’t have to clean your ceiling. It’s all about status. 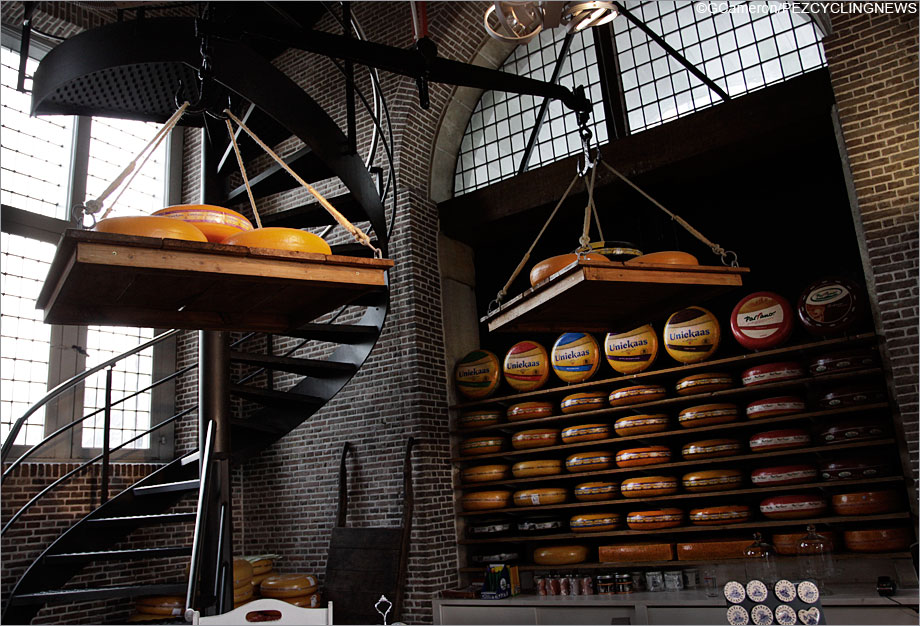 Gouda was super-wealthy back in the day, creaming enough in taxes to pay for four mayors. The mayors wanted a big market building for their cheese-selling enterprises so they commissioned an architect called Pieter Post to build a wooden facade in full scale. Then they stood on the balcony of the Stadhuis and decided the buidling wasn’t grand enough, so Post came back with a revised, more decorative version and the building went up in 1668. 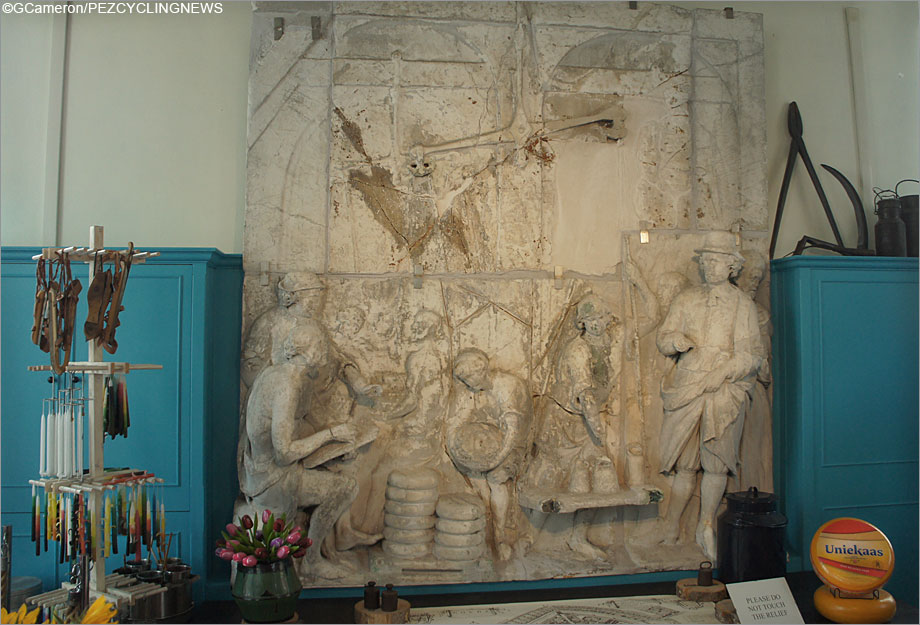 Inside the Goudse Waag (cheese market) there’s a fascinating frieze on the wall, recovered during a restoration a decade past. The poor farmer watches the children laboring in the market; the well-dressed weighing master watches on as the under-dressed bookkeeper notes the prices. He was displayed partially disrobed to show he had nothing to hide, but his foot is on the scales. Maybe he should have had a chance to hear Desgrange’s words, too? 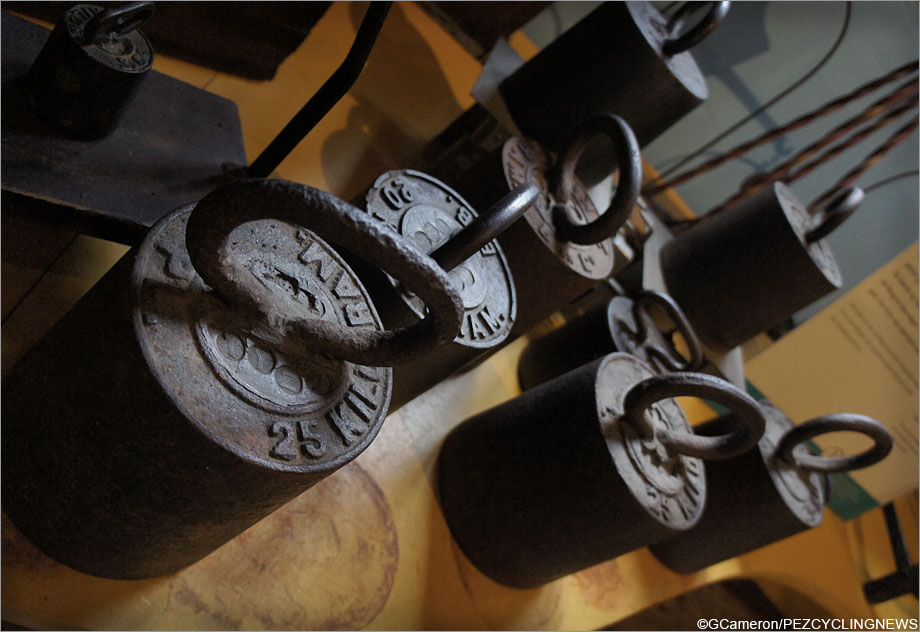 Almost the entire wealth and status of Gouda derived from the cheese industry, something that won them renown the world over; and today, here comes the Tour de France to add a little more lustre. 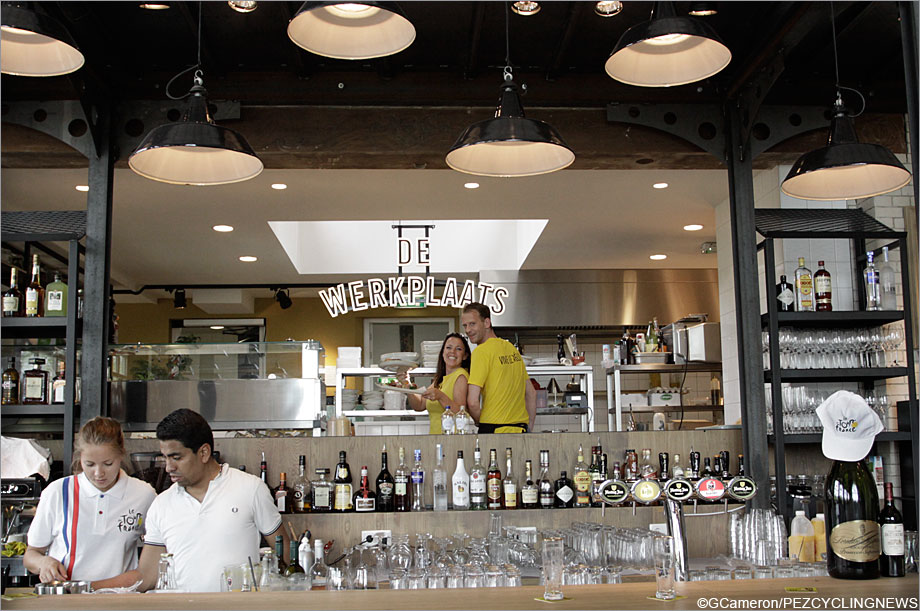 To escape the heat, we take refuge in Fabriek Licht Gouda, an upstairs cafe with a view out over the waterway. The staff are flat-out serving an international clientele, here for the Tour, but they are dressed the part. We’re refuelled with an hour until the race’s arrival, so we head out to take up positions …

Sure enough, though, our host over the last few days, Anita, had her prediction was bang-on. “I think it rains when the riders get to Gouda, about three o’clock.” And about three o’clock, the sky went from glaring, burnt-out white to kitchen-wall-fashionable grey; huge drops of rain pelting down. Just in time for the Tour’s arrival, the weather joins the party and spoils it for a few. 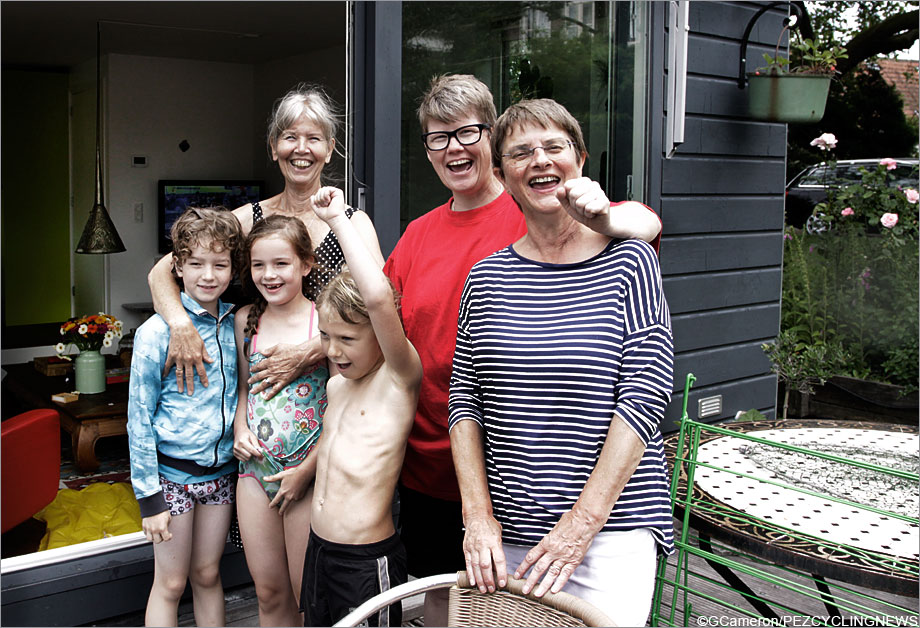 Valerie improbably ends up on a houseboat with a cool local family who had visited the Scottish Highlands not two weeks ago and knew all about our little village. Small world. Invited round the front of the building, she got a cool view of the peloton sweeping along Blekerssingel and then left onto Kattensingel. 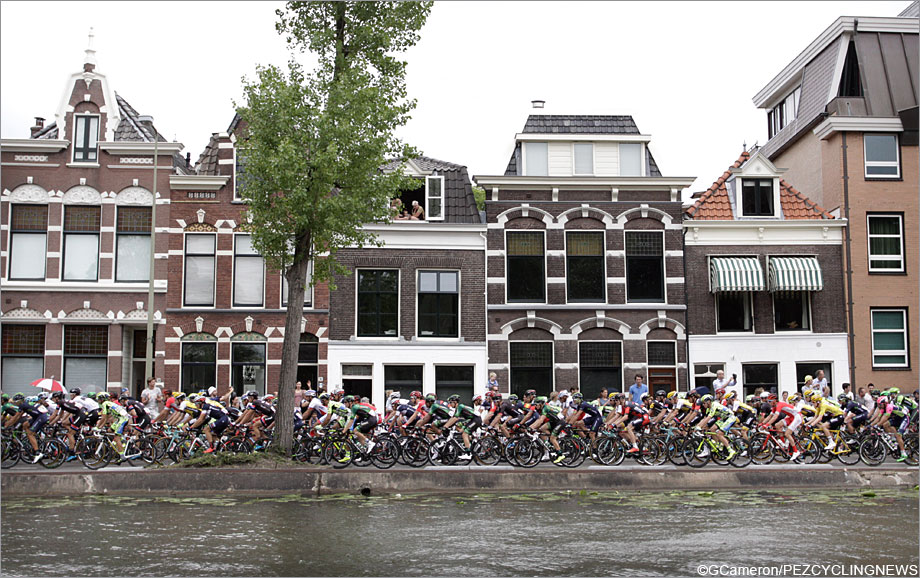 At the time, Rohan Dennis in his iconic yellow jersey was safely in the main field, but that would all change very shortly afterwards. I was tucked behind some barriers where Nieuwe Gouwe meets Turfsingel, anticipating the riders as the weather closed in. 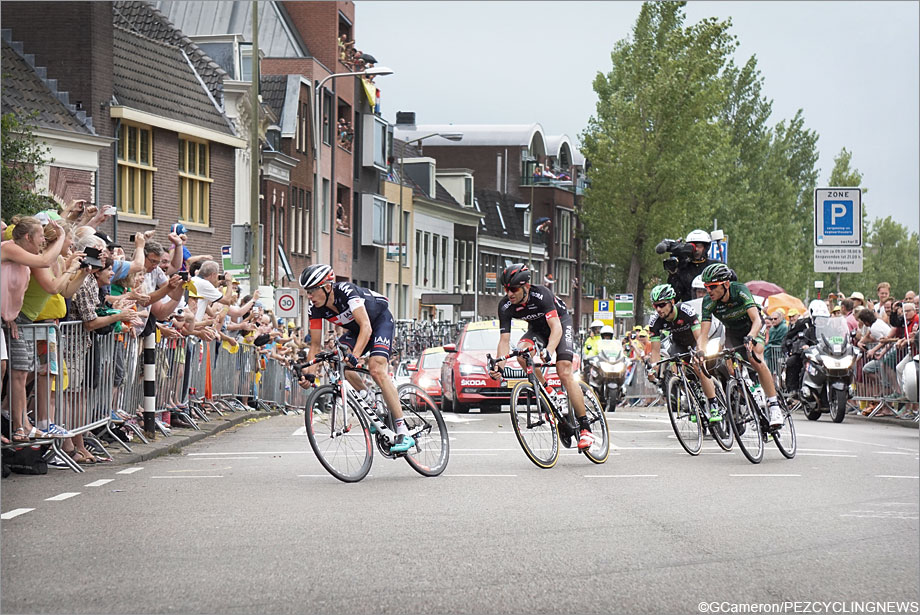 Recently-gathered hats, thrown from the publicity caravan hurtled across the road; leaves, loose papers, and assorted freebies danced towards the canal. The fans on the waterside squinted their eyes as the gusts brought dollops of raining clattering down.

Fonseca, Barta, Quemeneur and Clement came through at speed, just about on the fastest schedule. They took a right-hander in front of me straight into a block headwind with an almost cartoon-like shudder as the weather slaps them in the face. 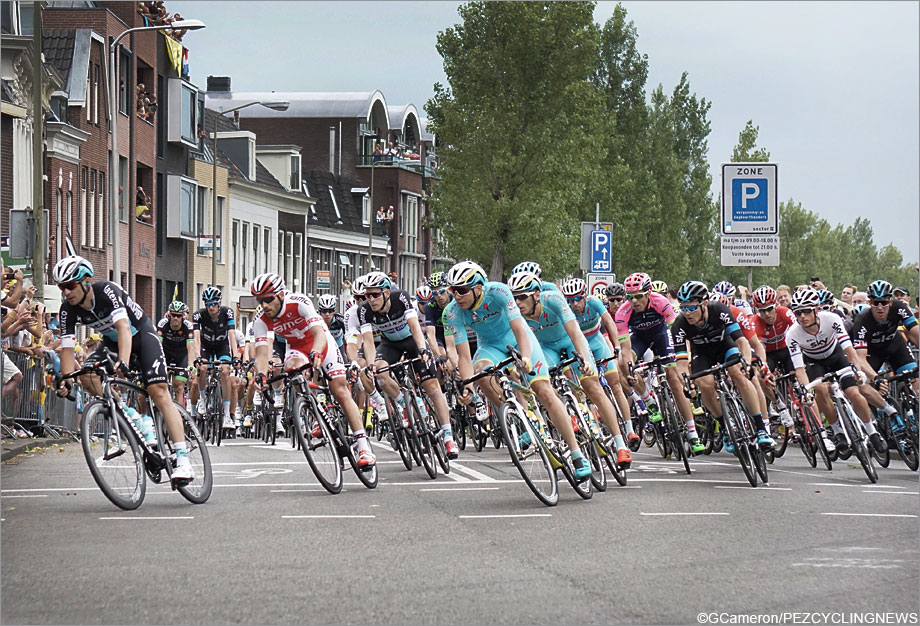 The field comes through a few minutes later, not far behind. You know that the breakaway is doomed; the fans know it, too, and I’m sure the four escapees have a pretty good idea that it’s just about hanging on as long as possible. 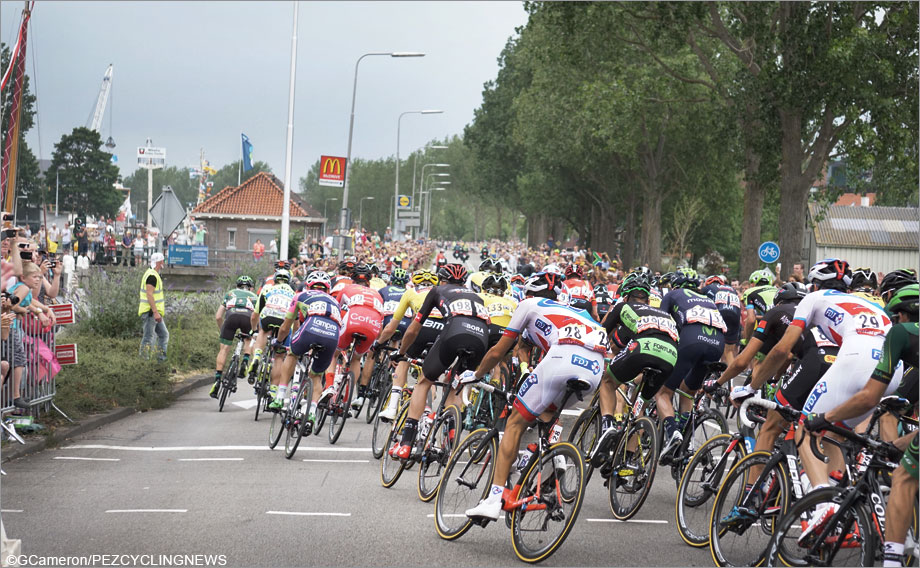 The fans stretch away as far as the eye can see as the riders disappear from Gouda and head towards Rotterdam and more wind-battered chaos. For us, the day in Gouda is done. Tomorrow, attention turns to the Mur de Huy, a status symbol climb that brings it’s own cachet to a little Belgian town.

We’ll be there, so stay tuned to Pez.