Race Report: Today was the perfect day for a successful long break and so it transpired. Tinkoff-Saxo must be a little happier as Rafal Majka won stage 11 after crossing the Aspin and the Tourmalet. The ride of the day came from Cannondale-Garmin’s Dan Martin who soloed to the leaders on the Tourmalet and then chased down Majka, but missed out on the stage win by 1 minute.

Stage 11 takes in two of the Tour giants: the Col d’Aspin and Col du Tourmalet before finishing up the climb to Cauterets after 188 kilometers. The course has much more to it than that as there are two Cat 3 and a Cat 4 climb to come before the Aspin. The finish in Cauterets is actually in the town and is ‘only’ a Cat 3. Previous years it would finish at the ski resort higher up. The Aspin (Cat 1) and Tourmalet (Cat HC) will show any weakness, but maybe come a bit early for a killer move as the Aspin is 71 kilometers from the finish line and the Tourmalet 41. It would be a brave (or foolish) GC rider to make his attack on either of them.

The stage was expected to have a long break and it wasn’t long before the attacks came. Lieuwe Westra (Astana), Michal Kwiatkowski (Etixx – Quick-Step), Bob Jungels (Trek) and Edvald Boasson Hagen (MTN-Qhuebka) managed to escape in the first 10 kilometers. Cannondale-Garmin and Lampre-Merida had missed the boat and were chasing at 20 seconds. After 25 kilometers FDJ.fr and Giant-Alpecin also moved to the front, but the lead was still under 1 minute. The intermediate sprint of the day was after 56,5 kilometers in Pouzac, but the Cat 3 climb of the Côte de Loucrup had to be tackled first. This morning there was only 3 points between André Greipel (Lotto Soudal) and Peter Sagan (Tinkoff-Saxo) for the green jersey, so both will have to have their climbing legs on to get to the sprint.

The escape was caught on the climb, but the peloton was split under the pressure of Thomas Voeckler (Europcar), who took the summit points. Sagan had made the cut, but Greipel was in the wrong part of the split, but with the help of his team they manage to catch the front in time for the sprint. Matteo Trentin (Etixx – Quick-Step) took full points from Sagan with a tired Greipel in fifth, so a Sagan is back in green tonight.

On the Cat 4 Côte de Bagnères de Bigorre a group of 15 riders rode away and were chased by another group of 7 as the race neared the Côte de Mauvezin. Sky was not happy with lead group and chased it down to bring the race back together. The next split included: Alexis Vuillermoz & Mikaël Chérel (AG2R-La Mondiale), Laurens Ten Dam (LottoNL-Jumbo), Steve Morabito (FDJ.fr), Jacques Janse van Rensburg & Daniel Teklehaimanot (MTN-Qhubeka). Teklehaimanot took the KOM points on the Mauvezin, but he has to collect a lot more to think about the jersey. 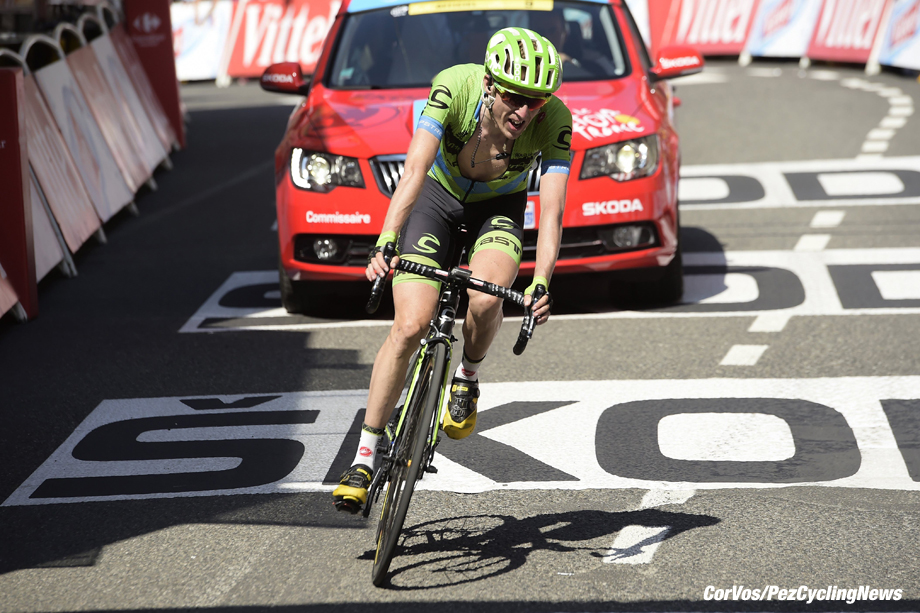 Rider of the day: Dan Martin

That group didn’t last long, next up was: Thomas Voeckler (Eruopcar), Rafal Majka (Tinkoff-Saxo) and Serge Pauwels (MTN-Qhubeka), they were joined by Steve Morabito (FDJ.fr) and Emanuel Buchmann (Bora), the German national champion. With 100 kilometers to go the leaders had nearly 3 minutes with Arnaud Démare (FDJ.fr) and Julien Simon (Cofidis) just under a minute behind.

Démare and Simon eventually caught the others and they built up a lead of 4:10 by half distance. The seven leaders were: Thomas Voeckler (Europcar), Rafal Majka (Tinkoff-Saxo), Serge Pauwels (MTN-Qhubeka), Steve Morabito & Arnaud Démare (FDJ.fr) Julien Simon (Cofidis) and Emmanuel Buchmann (Bora-Argon 18). Dan Martin (Cannondale-Garmin) set off after them and he was joined by Astana’s Andriy Grivko, but they had a big chase on to cross over 3 minutes. The lead for the seven over the bunch was over 6 minutes with 80 kilometers to go and the Aspin and Tourmalet were still to climb. 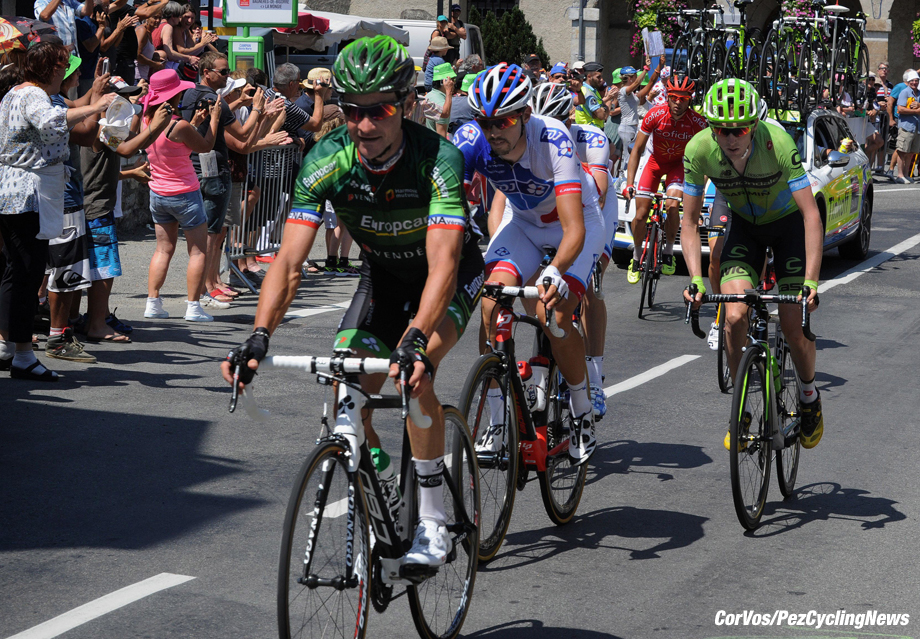 A hard day in the break

Grivko decided to give up and leave Martin to it on his own, and he makes a good go of it, and with 5 kilometers to go to the top of the Aspin he is within 1 minute of the break. Démare gets dropped and Martin goes straight past him to catch the others, they have 7 minutes over the Sky and BMC led peloton.

Dan Martin wants some glory from this Tour de France and attacks to take the Aspin ahead of Voeckler, Pauwels and Majka. The lead was 7:47 on the yellow jersey group.

50K to go
The lead was 6:40 and Sky were chasing, but not to concertedly. News came through that Ben Gastauer & Johann Vansummeren (AG2R-La Mondiale), Daniele Bennati (Tinkoff-Saxo), Rein Taaramae (Astana), Rui Costa (Lampre-Merida) and Bora-Argon 18 leader Dominik Nerz had abandoned. Démare caught the leaders on the descent, but he was in trouble and didn’t hang on for long.

The Col du Tourmalet
Astana came to the front of the peloton on the Tourmalet and lifted the speed, which saw splits at the back of the peloton, Péraud, Bardet, Rodriguez and Pinot being the most notable. Rafal Majka rode off from the break chased by Pauwels, with Martin, Voeckler, Simon and Buchmann trying to hold them at a catchable distance. The peloton was down to most of the stars, about 15 riders with Barguil just behind them. Rigoberto Uran (Etixx – Quick-Step) was also dropped as Richie Porte drove the yellow jersey group, which included: Vincenzo Nibali & Tanel Kangert (Astana), Chris Froome, Richie Porte & Geraint Thomas (Sky), Alberto Contador (Tinkoff-Saxo), Nairo Quintana & Alejandro Valverde (Movistar),Tejay van Garderen & Samuel Sanchez (BMC), Tony Gallopin (Lotto Soudal), Pierre Rolland (Europcar), Robert Gesink (LottoNL-Jumbo), Bauke Mollema (Trek) with Cannondale-Garmin’s Talansky just off the pace with Laurens Ten Dam and Mattias Frank.

At the top of the Tourmalet, Tinkoff-Saxo’s Rafal Majka took the highest summit in this years Tour de France, Pauwels and Buchmann were next. The Froome group was at 5:36. On the descent it was all nearly over for Barguil as a heard of cows decided it was time to cross the road. Movistar say that Alejandro Valverde dropped at 93 kilometers per hour.

25 kilometers to go and Majka had 5:36 over a fairly disinterested group behind led by Sky. Barguil managed to catch up. Pauwels was still chasing Majka at 1:16 with Martin and Buchmann chasing him, but they were over 2 minutes back.

Into the final 10 kilometers and Majka had 1:05 on Pauwels, 2:00 on Martin and Buchmann and 6 minutes on the yellow jersey group. Majka takes the sharp left bend onto the last climb of the day and the tail-wind to the finish line and looking like he could pull the stage win off as Pauwels was not making any sort of dent on his lead. Martin dropped Buchmann and headed off after the two in front of him. Richie Porte was setting the pace for the chase group, but they were slowing and some riders were rejoining from behind and 15 was now about 25.

5 kilometers left
Majka had 1:32 on Pauwels, 1:45 on Martin and 6:35 on the peloton. Martin shot past Pauwels as if he was stationary, 3K’s to go and it was looking like 1:28 was too much for the Irishman to close.

Bauke Mollema (Trek) attacked the Froome group, this shook Nibali off the back.

Meanwhile at the finish Rafal Mijka rolled over the line with his hands off the handlebars, Dan Martin was only 1 minute behind, Buchmann at 1:23 and Pauwels was at 2:08. Voeckler and Simon next at 3:34. 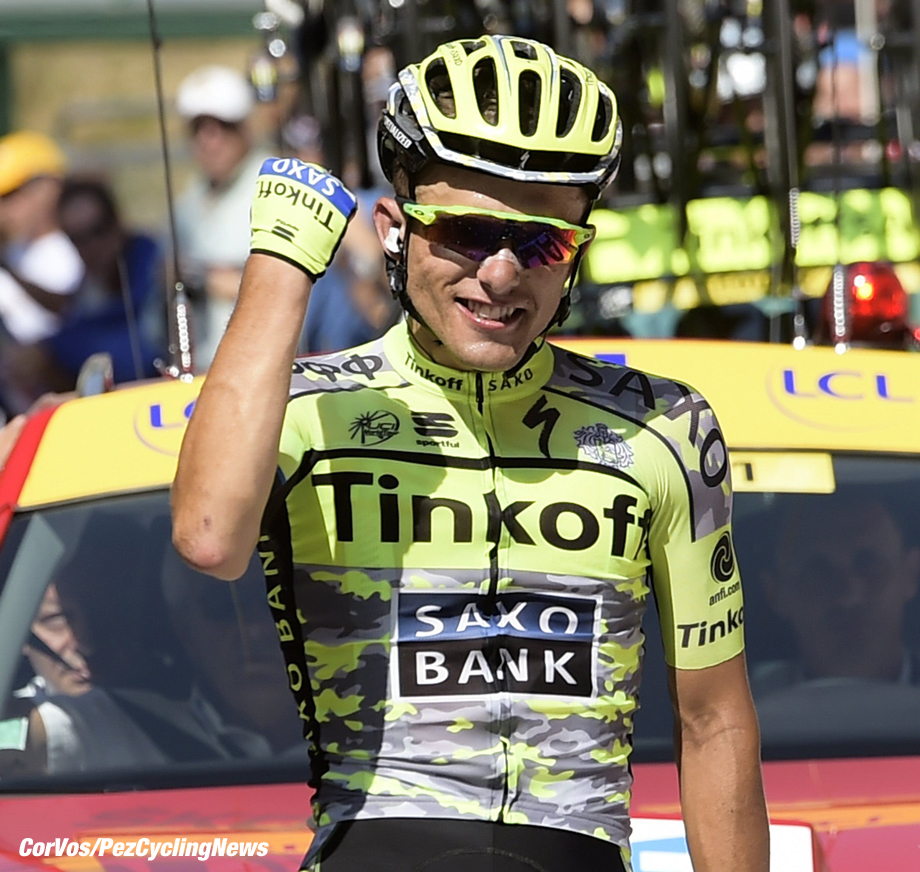 Another Tour stage for Rafal

Mollema had a good gap on the bunch, but it was splitting under an attack from Tony Gallopin (Lotto Soudal), the others jump after him with Geraint Thomas working for Froome. Mollema crossed the line just over 5 minutes after Majka as Valverde jumps from the group and Froome chases him down with Contador on his wheel. 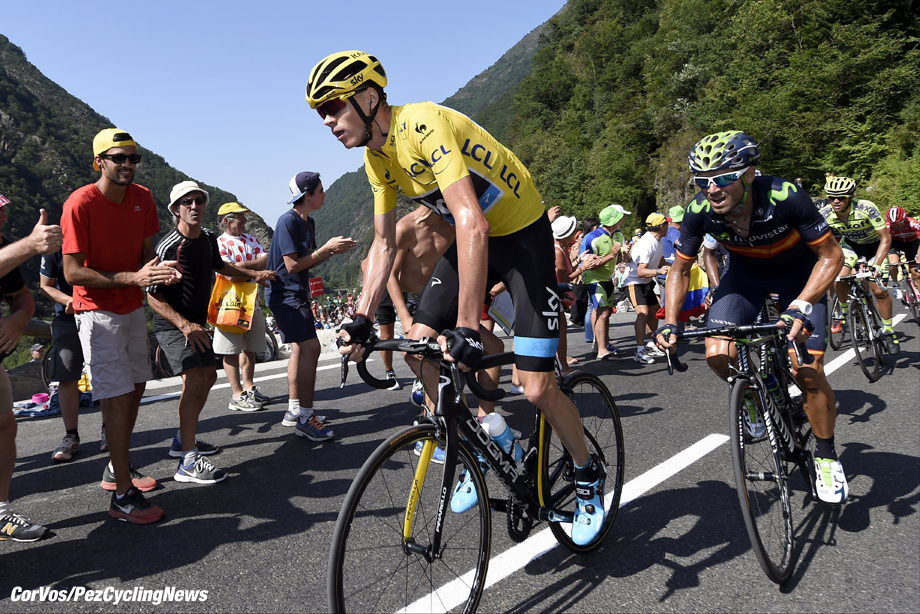 Stage winner, Rafal Majka said on TV after the finish: “I didn’t choose this stage but I knew it was really hard, it’s the Tourmalet, it’s not an easy stage and I like this weather. Today I had an opportunity to be in the breakaway. I’m so happy and this victory is for my teammate Ivan Basso, he’s now at home, and also Daniele Bennati, who crashed today. Also my family and my wife, who gives me a lot of power. I didn’t come here for the GC, I came here to help Alberto and we have some opportunities. It’s still a long Tour de France and we have to fight 100 per cent with Alberto.”

Keep it tuned to PEZ for the best Tour coverage, more big photos to come later.